Perhaps as a direct inverse reflection of its deafening volume in our everyday lives, politics is confined mostly to background texture in Richard Nelson’s new work, unlike the previous entries in his Rhinebeck Panorama, a transfixing experiment in real-time micro-macro drama that now spans a decade and encompasses eight plays. Performed, as always, by an ideally cast ensemble working in an ultra-naturalistic vein, The Michaels is true to its melancholy subtitle: Conversations During Difficult Times.

An extended family gathers around a kitchen table to sit, prepare food, eat, talk and exchange stories, contemplating both the past and the uncertain future. A shared passion for the performing arts, specifically dance in this case, further cements their communion, providing sanctuary from a world in chronic disharmony and the hope of regeneration in the face of death. Not a lot happens in conventional plot terms in this delicately calibrated two-hour drama, but there’s solace to be found in these people’s connections, as well as solidarity in their anxieties and fears, yielding poignancy that creeps up on you and then lingers in the air as dishes are cleared away and a hush returns to the house.

Playwright-director Nelson began his Chekhovian cycle in 2010 at The Public Theater with the first of four works that make up The Apple Family Plays; he followed in 2016 with the trilogy The Gabriels: Election Year in the Life of One Family. The Michaels shifts to another liberal, middle-class family in Rhinebeck, New York, and is the first part of a diptych.

Each play in the cycle is set on the night it officially opens, with Nelson tweaking the script up until an hour or two before the performance. Previous entries have been informed more directly by their time frames, taking place on election nights or important anniversaries, like the 9/11 attacks, John F. Kennedy’s assassination or a family death. The most topical reference in this latest installment is a passing mention of the killing of Abu Makr al-Baghdadi in the context of discussing how present-day America is perceived abroad. Elsewhere, the real world is folded in more gently, as in a nod to the rain at the farmer’s market that morning or on the train journey up from New York City. 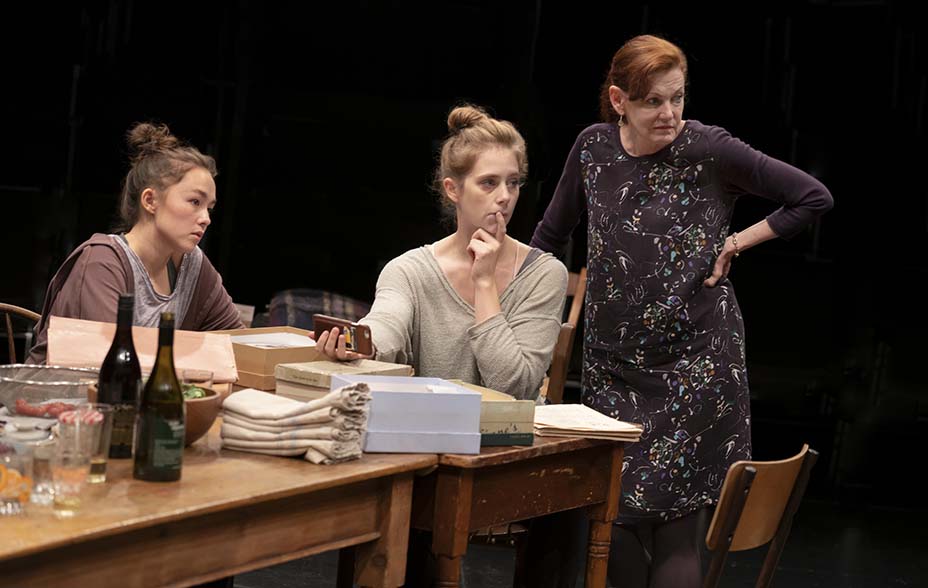 The younger generation is represented by Rose and David’s daughter Lucy (Charlotte Bydwell) and her cousin May (Matilda Sakamoto), who already are at work honoring Rose’s legacy by recreating dance pieces for a retrospective of women choreographers.

There’s an additional, invisible presence, too, in Alice, Rose’s late longtime partner, who clearly was the great love of her life as well as the cause of considerable pain. Awareness of that history further marks Kate as the outsider, the interloper from beyond the insular performing arts world. But as played with touching self-possession by the remarkable Plunkett (along with Sanders, a core player throughout the entire Nelson cycle), Kate is both discreet enough to observe from the fringes and sufficiently grounded to assert her place in Rose’s life without apology. Late in the play, we learn that Kate has her own world, quite separate from the Michaels, a life no less fully lived for being out of the spotlight.

From the moment the play begins, with the estrogen-heavy ensemble arranging the furniture on Jason Ardizzone-West’s lived-in set — spreading mats, placing props and assembling the ingredients for a meal to be cooked in the fully functioning kitchen — there’s a sense of women’s domestic routines being celebrated. That aspect is echoed also in Rose’s dances, which rejected the artificial movements of the ballet establishment and instead often represented such everyday chores as vacuuming or sweeping.

David at one point humorously recalls a five-and-a-half-hour piece inspired by a movie of similar duration that followed a woman’s mostly mundane household activities (unnamed, but obviously referencing Chantal Akerman’s seminal Jeanne Dielman, 23 quai du Commerce, 1080 Bruxelles, from 1975), which was as much an endurance test for the audience as the dancers. Mentions of Martha Graham, Pina Bausch, Paul Taylor, Merce Cunningham and Yvonne Rainer provide further context.

Nelson’s mother was a dancer, and there’s clearly a deep personal investment in Rose, a flinty, fiercely intelligent and somewhat cagey woman who is as unsentimental about her achievements as she is about her mortality. Wehle is quite wonderful in the role, brittle but never distancing. She watches with a gaze of searing alertness as Lucy and Rose rehearse solo pieces, awkwardly navigating the spaces around the kitchen table, and there are telling distinctions in the unsparing criticism she shares with her daughter as opposed to the warm encouragement for her niece. 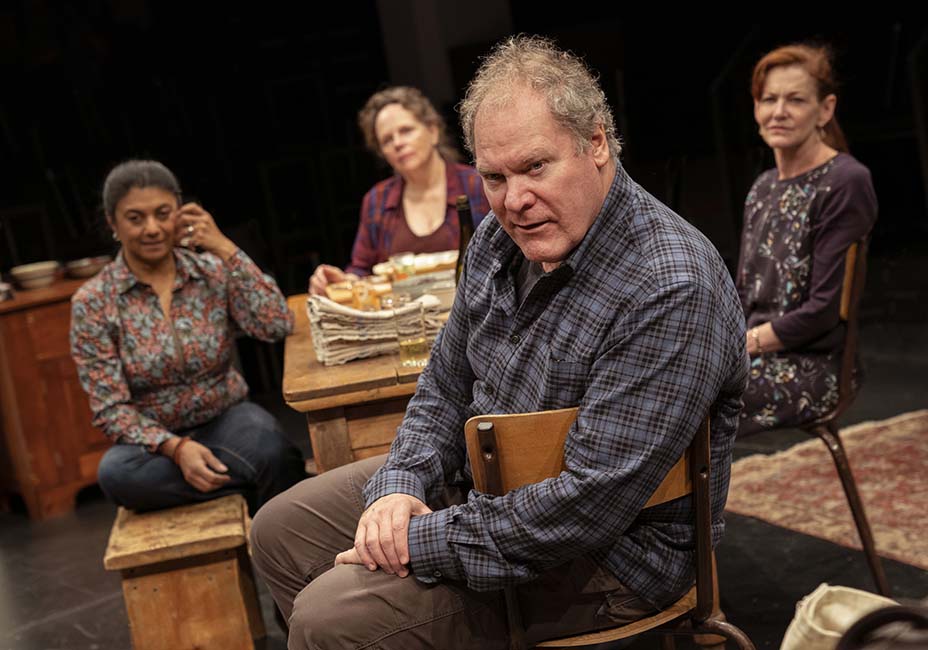 The dances, based on vintage original choreography by Dan Wagoner, are jagged and emotional, particularly a duet in which Lucy and May play their mothers, Rose and her sister. The balance of warmth and competition between them registers as a vivid memory, playing out across the faces of the characters watching, or in Kate’s case, providing another window to the younger life of the woman she loves. “I kept seeing ghosts, watching those girls dance,” Rose says later, without a trace of self-pity.

The extent to which she is or isn’t preparing for her death is a topic returned to frequently during interludes when Rose is out of the room, with speculation about the treatment she is seeking, or comments on the sudden, uncharacteristic appearance of spiritual books by her bedside.

In one exquisitely written passage, Kate describes the meticulously designed Japanese sectional garden at her home in the village, its paths narrowing to inspire quiet conversations or turning crooked and requiring concentration to maintain one’s footing. “Like with the best dances,” Kate recalls Rose saying when she first showed her the garden. “They try to help us look inward.”

That’s essentially what Nelson and his superlative ensemble do with this spare, deceptively simple but ultimately heart-wrenching play and its unadorned, fly-on-the-wall naturalism. They guide us to push aside the chaos and noise of the world outside — the howling indignation of our national political travesty and the encroaching despair of a planet being steadily destroyed — urging us to consider instead the resilience and hope of our ordinary lives.