Muriel Heslop strides confidently into the social media age in Muriel’s Wedding the Musical, based on the Cannes-storming feature from 1994 that made stars of Toni Collette and Rachel Griffiths. A joint production between Sydney Theatre Company and Global Creatures (Strictly Ballroom, King Kong), this musical adaptation has enlisted the film’s writer-director PJ Hogan to pen the book, and his makeover maintains the misfit spirit of the original while rounding out some of its sharper edges.

The result is a precision-tooled crowd-pleaser, buoyed by an appealing performance from newcomer Maggie McKenna in the lead role and toe-tapping tunes from Aussie singer-songwriter Kate Miller-Heidke and partner Keir Nuttall. There’s also a selection of greatest hits from — who else? — Abba, with the pop group’s members amusingly played by actors onstage throughout.

Premiering at Sydney’s 896-seat Roslyn Packer Theatre, Muriel’s Wedding shrewdly brings its heroine into the present moment by making her a selfie-obsessed, follower-counting millennial. The trio of bullies who torment her get a hilarious number with “Shared, Viral, Linked, Liked,” tossing their manes and snapping selfies with robotic rapidity, and the proscenium is adorned by designer Gabriela Tylesova with giant iPhones, periodically showing us snapshots of a deliriously happy Muriel quite different from the one onstage. In an age where the gulf between physical and virtual intimacy is widening, Muriel’s loneliness and her desperation to present a postcard-perfect image makes her transplantation to 2017 utterly convincing.

This retooling is current in other ways, too. Australians have just voted for marriage equality, and Hogan and the show’s director Simon Phillips (Priscilla, Queen of the Desert, the currently touring Love Never Dies) lean into the story’s fabulousness. Muriel’s mail-order husband eventually professes a soft spot for “little Tom Daly,” the English diver, as well as for the films of Baz Luhrmann. And “Sydney,” one of a half-dozen full-company showstoppers, affectionately plays up the harbor city’s leather-chapped image as a place where anything goes and all are encouraged to “be what you want to be” — unless you want to be a parking inspector. 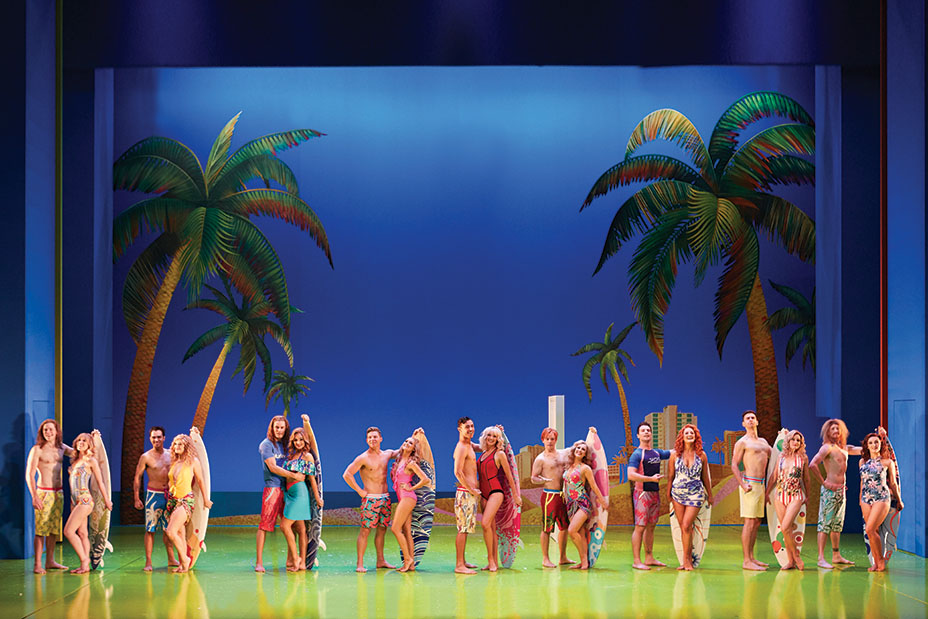 Enter Brice Nobes (Ben Bennett), the long-suffering paramour (and parking inspector) played by Matt Day in the original movie. His part is beefed up, with a number all his own (“Never Stick Your Neck Out”) sung atop a ladder under the Sydney Harbour Bridge, and by show’s end we get the rom-com reunion the film denied us.

That neatness echoes the entire production, which largely adheres to the same story beats as the film but softens the scabrousness of the original with more conventional triumphalism. Defined by her inarticulacy, Muriel is able to transcend herself through song, not least at her mother’s funeral, where, in “My Mother,” her father is confronted and her mother’s value affirmed. McKenna herself nails the delusion, even if she is a decidedly less-than-ugly duckling (ditto her mother, played by the stalwart Justine Clarke), and no amount of baggy clothing can make her look like a “fatso whale.”

Gabriela Tylesova’s sets and costumes burst with pastel pop from the opening number, “Sunshine State of Mind,” which sees the inhabitants of the coastal town of Porpoise Spit twirling surfboards like professional sign spinners, courtesy of choreographer Andrew Hallsworth. Presenting sunniness is what it’s all about, especially for Muriel’s father, Bill (Gary Sweet), a developer who deals strictly under the table.

Sweet and Helen Dallimore, as his mistress, sing about the future (in “Progress”) with all the seedy glamour of a Blackpool cabaret. But Bill is blindsided when Muriel, spurned by preening queen-bee Tania (the reliably superb Christie Whelan Browne), absconds to Sydney with her father’s credit card. She moves in with the brassy Rhonda (a charismatic Madeleine Jones), and the restorative power of friendship fuels the jubilant finale, in which the 28-strong company reprises the Rhonda-Muriel duet “A True Friend.” 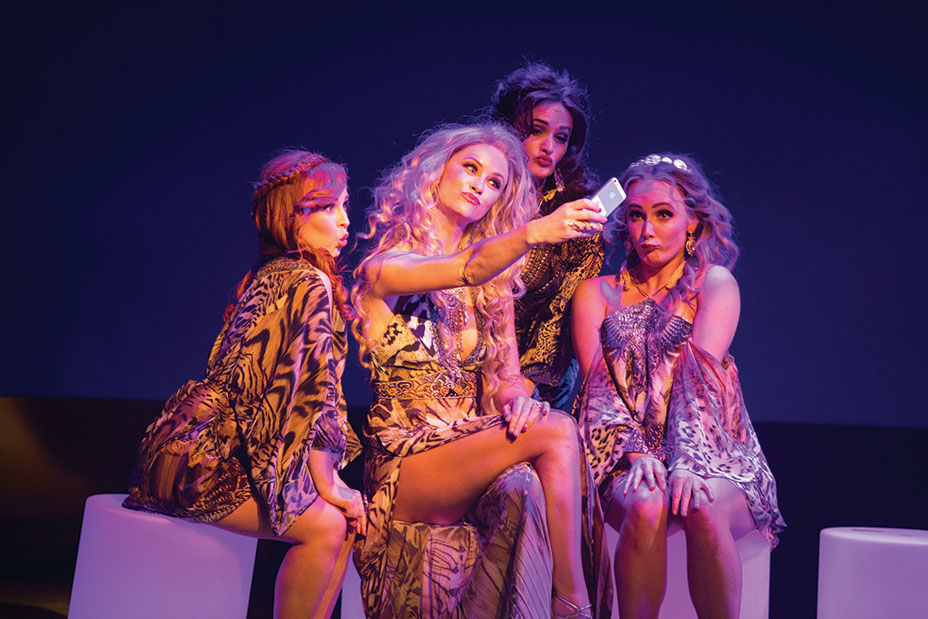 Original songs like that one are threaded alongside a medley of Abba’s biggest hits by the young musical director Isaac Hayward, reuniting with Miller-Heidke after Opera Australia’s The Rabbits in 2015. Staples here include “Dancing Queen,” “Fernando,” “SOS,” “Super Trouper” and, of course, “I Do, I Do, I Do, I Do, I Do,” and it’s to the co-lyricists’ credit that the new numbers hold their own alongside them. “Meet the Heslops” introduces Muriel’s layabout siblings watching a game of cricket — a series of grunts and exhortations repeated ad infinitum, in a scene that seems to presage a kind of Antipodean Matilda — while “Can’t Hang” marks Muriel’s public humiliation with a sinisterly catchy ode to coolness and exclusivity that’s justifiably reprised in the second act.

The decision by Hogan and Phillips to have Abba appear onstage as the title character’s imaginary, solace-providing friends proves a masterstroke, with frequently very funny discursions culminating in Benny’s exultant discovery of a Sydney suburb called Waterloo. Benny (Aaron Tsindos), Björn (Mark Hill), Agnetha (Jaime Hadwen) and Anni-Frid (Sheridan Harbridge) are a goofy but benevolent chorus, framing and commenting on key moments — such as the suicide of Muriel’s mother — in a way that puts a glass-half-full spin on the original. Mum’s death might be tragic for everybody else, but for her it’s a release.

The scene of her departure is like something out of Frozen, and Phillips and his crack backstage team manage to make each transition — even between landscapes as starkly different as Scandinavian and Australian — seamless. Walls slide sideways, neatly narrowing and expanding the eye’s point of focus, and a revolving mechanism shuttles the players from living room to nightclub to harbor foreshore with dizzying speed. A vivid bit of perspective-flouting during the love duet “Strangely Perfect Stranger” sees Muriel atop the Harbour Bridge, while her dream man (Stephen Madsen, as her soon-to-be-husband) does push-ups below; he finally drapes his killer body over the Opera House sails, gazing up lasciviously.

Jonathan Church, who commissioned this show before leaving STC last year, has already brought Phillips’ North by Northwest to the U.K. This musical, a rousing tribute to transcending circumstance and the outcast spirit, feels poised to beat a similar path abroad, as Priscilla did before it. Fans with a Mamma Mia!-size hole in their lives will rejoice.