In her books Olive Kitteridge and Anything Is Possible, Elizabeth Strout adopts a complex linked-story structure to explore character and milieu. But her slender, tremendously affecting 2016 novel, My Name Is Lucy Barton, is as direct, deceptively straightforward and singularly focused as its title implies. At the same time, it unfolds a wealth of seemingly unrelated mini-narratives, personal insights and half-buried memories to draw the complicated connection of a daughter to her flinty mother, reconciling with the legacy of a miserable childhood. That duality, between the emotional immediacy of the present and the impressionistic filter of the past, is distilled with faithful exactitude in Laura Linney’s finely calibrated performance in the title role.

'Beetlejuice' to Close on Broadway in January, After Fan Revival

Adapted by Scottish playwright Rona Munro and directed by Richard Eyre with elegant simplicity and unerring trust in the material, this solo play premiered to great acclaim last summer in London. It arrives on Broadway as an ideal showcase both for the compassionate lucidity of Strout’s writing and for Linney’s gifts as a performer capable of flipping back and forth between open-hearted tenderness and brittle distance, while almost imperceptibly illuminating the messy terrain of human relationships that separates them.

Surrounded up close on three sides by her audience, Linney’s Lucy Barton strides briskly onto designer Bob Crowley’s spare set, a private room in a Manhattan hospital represented only by a patient’s bed and a visitor’s chair; she proceeds to share her story of a time many years ago when she spent nine anxious weeks under medical observation due to complications from what should have been a routine appendectomy. Three weeks into this fog of uncertainty, fear and fatigue, her mother appeared after years of separation and silence, sitting at the foot of her bed.

The rear wall serves as the hospital window, with its view of the Chrysler Building, while also opening out into a screen on which Luke Halls’ projections appear — of an isolated farmhouse in rural Illinois, a Greenwich Village street, a rain-streaked truck windshield under a dark sky or a green cornfield, resplendent in the sun. Eyre also uses underscoring and shifts in Peter Mumford’s supple lighting to modulate the tone and emotional temperature. But the primary theatrical force here is the synergy between the author’s voice and the actor’s nuanced interpretation in a character study notable for its avoidance of sentimentality and cliché. (Linney also has recorded the production for Penguin Random House Audio, a co-producer on the Broadway engagement.)

“Lonely was the first flavor I had tasted in my life,” says Lucy, recalling both her childhood and a moment in adulthood when an acquaintance recognized that sad history in her. “And it was always there, hidden inside the crevices of my mouth, reminding me.”

There have been innumerable personal narratives about overcoming the trauma of childhood neglect and abuse in fragmented families. But Lucy’s reckoning with a past defined by the shame of poverty, the fear of a cruel war-veteran father twisted by PTSD, and the constant hunger for warmth from a withholding mother is compelling precisely because it isn’t a formulaic account of moving beyond that pain. There are no triumphant epiphanies here. Instead, Strout — and in turn Munro, honoring the novelist’s intentions with her subtle reshaping and trimming of the text — achieve something far more difficult. They reveal with grace and restraint how the deep-rooted sorrows of those years have shaped the whole human being that Lucy has become, generously receptive to life and to kindness because of, and not in spite of, all that she has endured. 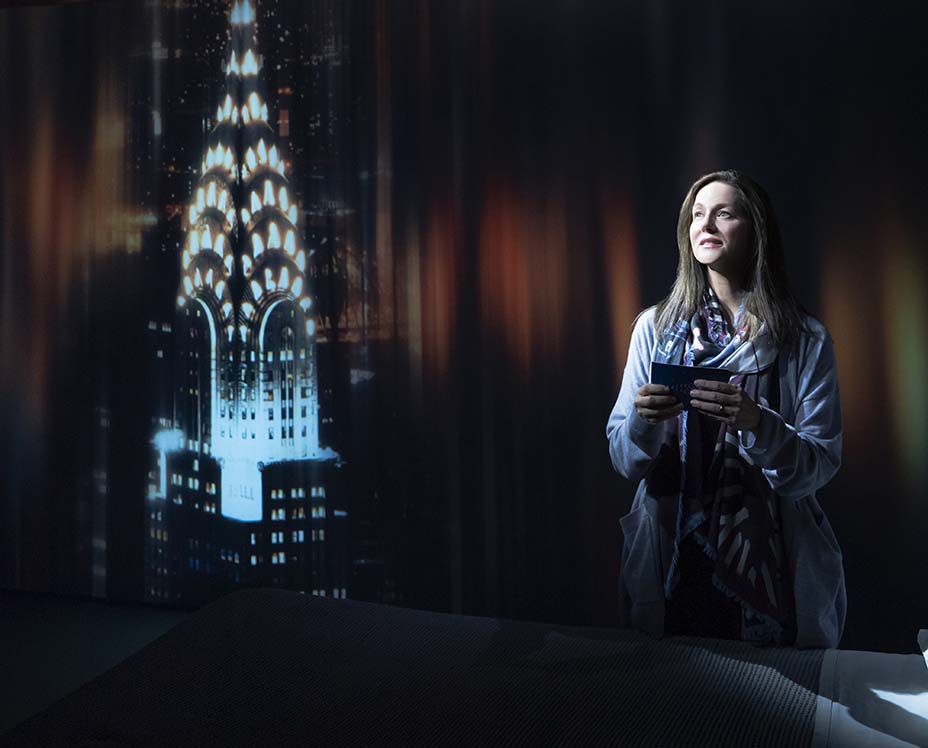 The trigger for self-reflection that seems to have been percolating for years is traced back to that unexpected appearance of Lucy’s mother, who arrived without warning and was gone just as suddenly five days later. We learn that the no-nonsense, pragmatic woman was summoned by Lucy’s husband, and that she had never been on a plane before, let alone done anything so challenging as to hail a cab from the airport and find her way to a hospital in a strange city.

With seamless fluidity, Linney shifts between the voices of Lucy — soft, mildly citified, candid, thoughtful and full of empathetic feeling — and that of her mother, with its harsh, Midwestern flatness, its disdain for sugar-coating and its frequent notes of schadenfreude as she recounts the misfortunes of locals from Amgash, the town where Lucy grew up and her mother still lives.

Her gossipy yet matter-of-fact accounts of bad marriages, romantic blunders, deaths and disgraces fill the poignant silences in which mother and daughter are unable to discuss the unhappiness of their shared history. The meanness that colors her mother’s tone when she mentions folks from “the East” — a word she practically spits out in disgust — and indeed the perceived air of superiority of anyone from the Eastern Seaboard points to her resentment toward Lucy for the betrayal of simply having left. And despite the full knowledge that escape was necessary for her survival and growth, Lucy’s memories of those exchanges are tinged by misplaced guilt. Strout’s writing is particularly eloquent about the divide that forms even under the most civil family relationships between those who leave and those who stay behind.

Munro’s filleted text at times perhaps unavoidably feels hurried compared to the novel’s amplitude of feeling as it touches on Lucy’s witnessing of the AIDS crisis in the years surrounding her hospitalization; the impact of the 9/11 terrorist attacks and of watching one of her daughters take in the frightening images on TV news coverage; the end of her own first marriage; and the eventual deterioration of her relationship with her children. But there’s also a lovely economy in evidence here as indelible moments in a life resurface, all of them adding shading and depth to this intimate portrait, and to the solitude that was a fundamental part of Lucy’s formation as a writer. The piece is very much about the process by which we sift through and make sense of the past as we find a way to tell our stories.

Among the most haunting passages is the recollection of Lucy’s father publicly humiliating her brother after discovering the boy was gay, and of their mother curtly dismissing the resulting tears of her younger sister. Searing episodes like that one of a larger, more pervasive trauma form a kind of melancholy mosaic that’s countered by moments of comfort, even joy, such as Lucy’s recollection of the kindness of her attending physician at the hospital. She doesn’t need to state the obvious to convey that the lingering touch of his hand on her forehead represented a display of paternal affection completely foreign to her.

Yet one of the play’s most moving elements is Lucy’s realization, following the death of first one parent and then the other in the years after her hospitalization, that even her irrevocably broken family still held structural importance in her life.

Linney’s emotional transparency is wondrous as she relates the different ways in which mother and daughter reach out to one another for forgiveness without ever saying the words, each of them revealing a difficult admiration for the other that’s almost like love. Equally extraordinary is Linney’s ability to speak with warmth, immediacy and the grounded wisdom of hindsight while simultaneously inhabiting a precarious moment from many years before. Embodying both the reinvented Lucy and the more fragile versions of her childhood and earlier adult years, she fills the stage, making this delicate memory piece resonate with the soaring vitality of a fully lived-in present.