“It’s the real estate story that will not die. It would be great to put it to rest,” says interior designer Michael S. Smith, who redid the White House for the Obamas, of yearslong rumors that the former first family is seeking to buy a Palm Springs-area house (perhaps even the home of Smith and partner James Costos). “They clearly like the desert, but they’ve never even looked for a house, and my house is certainly not for sale.”

Smith, 53, whose clients have included Steven Spielberg, George Clooney, Cindy Crawford, Dustin Hoffman and Harrison Ford, is phoning from Madrid, where he and Costos, 54, continue to spend time even though the latter no longer holds the job of U.S. ambassador to Spain. After Costos and Smith raised an estimated $2.3 million for Barack Obama’s re-election in 2012, Obama included Costos, then an HBO vp of global licensing and retail, among the fundraisers he rewarded with ambassadorships. When Donald Trump took office, all politically appointed ambassadors were ordered to leave the government by Inauguration Day, with no exceptions for personal reasons — a break with precedent — and Costos‘ posting ended. “We were prepared to leave,” says Smith, “and it’s fine.”

They hardly left inconspicuously. On Jan. 20, they flew on Air Force One with the Obama family from D.C. to California, where all settled in at Smith and Costos‘ Mayan-inspired spread in the Thunderbird Heights section of Rancho Mirage (Gerald Ford owned a home there). On Jan. 31, Smith and Costos jumped back into the L.A. social swim, hosting a party at their Holmby Hills spread to toast Oscar telecast producers Jennifer Todd and Michael De Luca, drawing such guests as Jimmy Kimmel, Damien Chazelle, J.J. Abrams, Kevin Huvane and Ben Sherwood. On Presidents’ Day weekend, they again hosted Obama in the desert (he was there to golf with college buddies). 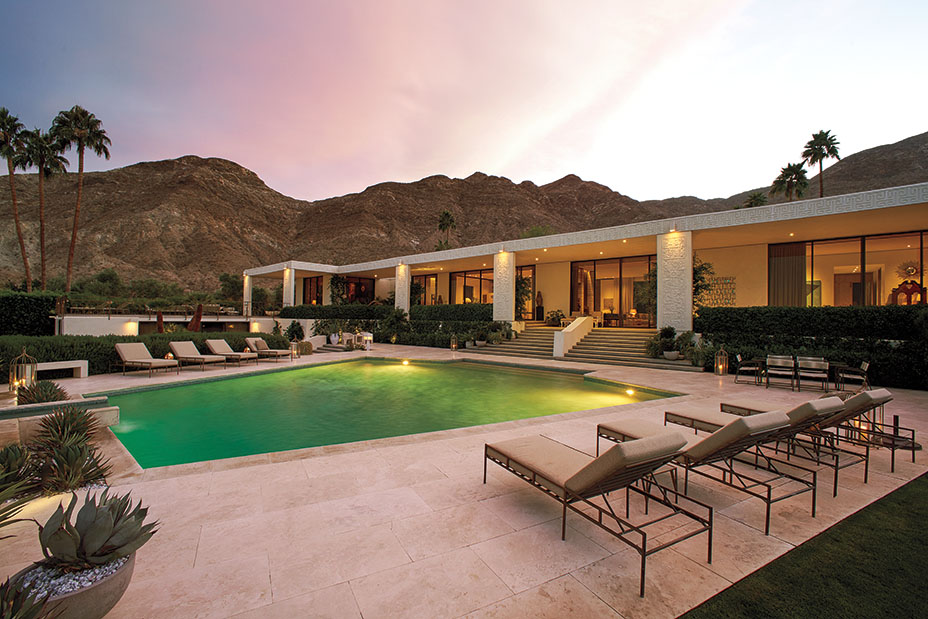 Costos — who in February joined the board of investment bank PJT Partners, which has offices in Madrid — plans to continue working in technology and media as well as on various Obama Foundation initiatives. He won plaudits for his tenure in Spain, where among other accomplishments, he started an innovation conference to promote technology start-ups, pushed Spain to fight entertainment piracy, and attracted Hollywood. Universal shot part of 2016’s Jason Bourne in the country’s Canary Islands, and Mike Medavoy shot April’s The Promise in Spain for three months “because they were so artist-friendly,” says Mike’s wife Irena Medavoy. “They truly rallied for it.”

Notes Costos, “We led delegations of Spanish officials to Hollywood and made high-level introductions resulting in mutually beneficial opportunities for Spain and the U.S. Since my arrival in Spain, laws and regulations on privacy have been strengthened and we have promoted the U.S. film industry by hosting premieres at the embassy in addition to events for HBO’s launch in Spain with Richard Pepler. Many U.S. studios have found great locations and tax incentives in Spain and in turn Spain has benefited from increased tourism.”

Smith — who spent one week a month in Madrid while continuing his design business (recent projects include the lobby of Santa Monica’s Casa del Mar hotel and the launch of an outdoor furniture line for Brown Jordan) — renovated the ambassador’s residence, much of it at the couple’s expense. “We left the house much better than we found it,” he says, adding that the MPAA paid for and installed a 30-seat screening room. “Everyone came and stayed with us, from Gwyneth Paltrow to Sarah Jessica Parker to Harrison Ford and Calista [Flockhart]].” The couple frequently threw parties to introduce U.S. visitors to their Spanish peers. “We took the idea of this bridge between the two countries really, really seriously,” says Smith. Adds Irena Medavoy: “Mike loved the intellectual mix of business artists and fashion. The embassy was the place to be.” Obama visited the country last year, the first time a U.S. president had done so in 15 years. Smith and Costos enjoyed their time in Spain so much that they are now thinking of getting a residence there.

Thank you POTUS @barackobama. I look forward to following your leadership while serving our great country together as private citizens! #YesWeStillCan #lasttimeintheoval

So what will happen to Smith’s White House design under Trump? Some  observers have worried about its fate: At the Women’s March on Washington  Jan. 21, L.A. artist Kimberly Brooks (wife of actor Albert Brooks) held up a sign that read “I’m really worried about Michael Smith’s decor.” But the designer says he’s optimistic that Melania Trump’s new designer, Tham Kanallikham, will be respectful of history.

“I’ve had several really nice conversations with her,” Smith notes. “It’s America’s house and you want to be non-partisan and helpful. She is really lovely and super aware of the history. She is very serious and scholastic and I think she’s going to approach it in a correct way.” He adds that the gold curtains Trump has hung in the Oval Office were also used when Bill Clinton was in office.

Smith and Costos plan to support the Obama Foundation and are looking into raising money for Democratic governors in the next cycle. As for whether Smith will work with the Obamas if and when they do find a new home: “One of the great things that’s come out of this is that we’ve become really good friends. Listen, whatever they ask me to do I of course I’ll do it.”

One thing Smith remains most proud of is working with the Obamas to expand the White House’s art collection to include more modern works. “The Robert Rauschenberg Foundation donated a piece. A piece by Alma Thomas was purchased for the White House, making her the first African-American female artist in the collection,” he says. “It’s something that transcends this moment and shows the White House can be inclusive, including of LGBT voices. It shows a broad base of America.”

fun nights in madrid with harry and calista…thrilled you guys are enjoying spain!