Just like the body of water of the title that is simultaneously an ordinary duck pond and a vast, aquatic hyper-dimension without end, the theatrical adaptation of Neil Gaiman’s book, The Ocean at the End of the Lane, seems to defy the standard model of physics. This wonderfully kinetic, relentlessly imaginative and emotionally lush work of magical realism practically explodes inside the intimate Dorfman studio at the National Theatre in London, where it’s staged in the round. With the right venue, this could easily be transferred to the West End and beyond, although the eerie spells it casts will work best in smaller spaces, preferably dark as closets.

'Back to the Future' Broadway Musical Set for 2023

Aptly enough for a story about a lonely, 12-year-old boy (played here by Samuel Blenkin, outstanding) who is befriended by a trio of immortal, near-all-powerful beings posing as a daughter, mother and grandmother in a rural English farmhouse, the production fruitfully teams up young and established talents.

As with several of the productions from the team’s résumés, mentioned above, Ocean plies its trade with old-school theatrical trickery (designed by Jamie Harrison), deploying well-oiled trap doors, misdirecting lighting cues or bursts of sound, and mere sleights of costuming to create numerous uncanny effects. It’s a magic show in every sense of the phrase. 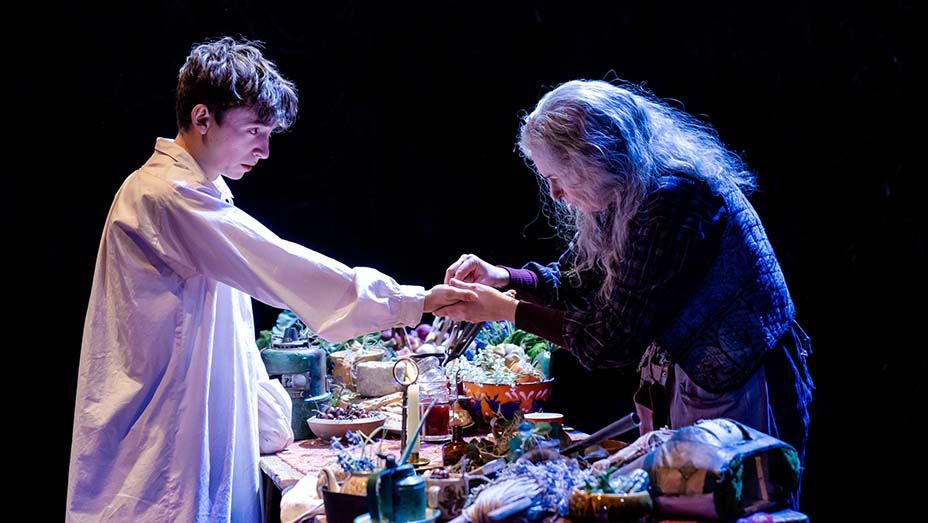 Although those who know the source material will find the adaptation largely faithful to the book, albeit with a few tweaks, there are plenty of coup de theatre surprises in store. It’s probably best not to reveal too many of them in this review, tempting though it is. Hopefully, given the title, I can at least give one example by noting that puppets, remotely controlled lights and several bolts of white organza wafted about on sticks all interlock to create the eponymous ocean at the climax. Let’s just say that even better is in store, particularly in the domestic-set scenes that exploit ordinary fixtures and fittings to generate jump scares and spine shivers.

Crucially, although the fantastical quality is intrinsic to the show and story’s appeal, its potency also lies in the everyday realist side of the narrative. The unnamed protagonist, played mostly by Blenkin (a former Scorpius Malfoy in Harry Potter and the Cursed Child), is actually first met as an adult played by Justin Salinger (a familiar face on the London stage, recently a lead in Richard Billingham’s film Ray & Liz). He’s just returned to the Home Counties village where he grew up for the funeral of his father, and a walk outside before the wake becomes a literal stroll down memory lane when he reaches the house at the end of the drive. There, an encounter with crinkly kind Old Mrs. Hempstock (Josie Walker) prompts long-buried memories of his childhood, especially of his friend Lettie (Marli Siu, a delight), her mother Ginnie (Carlyss Peer) and an eventful summer circa 1983, a year after his own mother had died.

Back then, his still-grieving father (also played by Salinger) tried to take in boarders to help pay the rent. Unfortunately, the first one (Jeffrey Sangalang) kills himself in the family Mini (one of the first scenes of the show). The next, the glamorous Ursula Monkton (Pippa Nixon), turns out to be a “flea,” or supernatural monster from another dimension wearing human skin. Or maybe that alien nature is just a child’s fantasized transmogrification of an abusive babysitter. 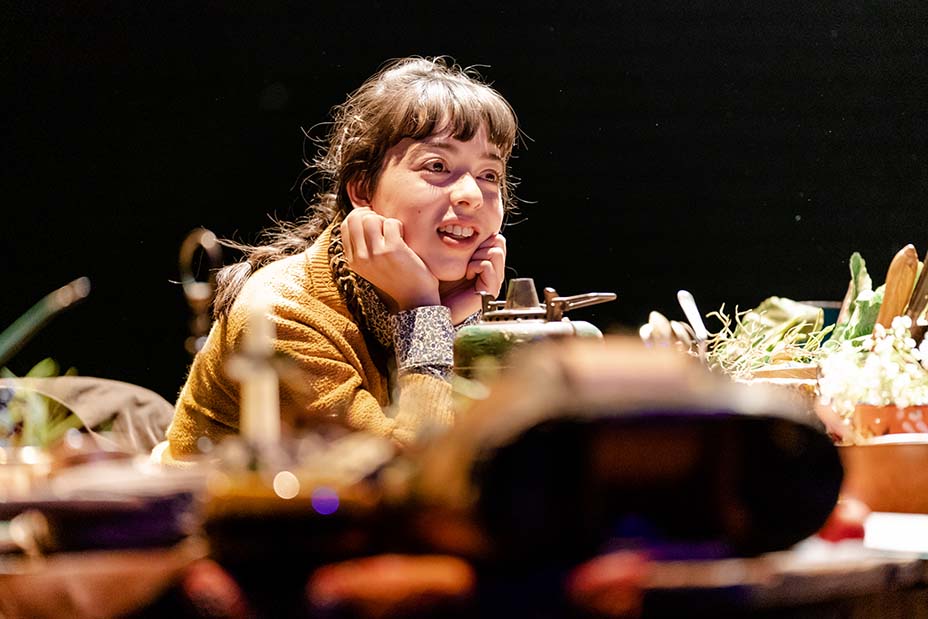 Indeed, one of the core themes of the play is discrepancy between outer forms and inner beings, and that clearly extends to the vessel of the story itself, one that contains emotional truths grounded in autobiography even if the shape of events is nothing like what happened to the real author. But like the protagonist, Gaiman has written about how lifesaving reading was for him as a child, and Ocean even finds a clever way to make its protagonist’s “escape” from an unhappy home a literal escape from the prison Ursula creates for him.

The cost of all this trauma and loss is emotional damage, symbolized as wounds inflicted by the shapeshifting interdimensional traveler that burrows inside people. Removing her leaves the boy alive, but damaged, his memory partly wiped, and with “a little shard of nothing inside you,” as Old Mrs. Hempstock says. The play, like Gaiman’s writing, brims with felicitous little phrases like that which resonate all the better because of the superficial plainness of the prose.

Rudd and her collaborators find a correlative to Gaiman’s gift for finding the menacing within the mundane by using little rhyming motifs throughout. For example, the black umbrellas first met at the funeral that eventually turn into the tattered wings of the “hunger birds,” harpy-like figures Lettie lures over to battle Ursula. Hidden things keep being revealed through the stagecraft and the story in lockstep, like an enormous full moon on a night it shouldn’t be there, which suddenly shines through the thicket of branches at the back of the stage.

The National Theatre is promoting the show as suitable for 12-year-olds and up, although youngsters (and middle-aged adults) with more delicate constitutions may find it very frightening, much like several of Gaiman’s other works. (My otherwise fearless 11-year-old, for instance, still refuses to watch the animated adaptation of Coraline with its sinister “Other Mother” who steals eyes.) Reading the book in advance might help temper the fear — after all, a thorough knowledge of C.S. Lewis’ The Lion, The Witch and the Wardrobe is what saves the boy in this marvelous work. 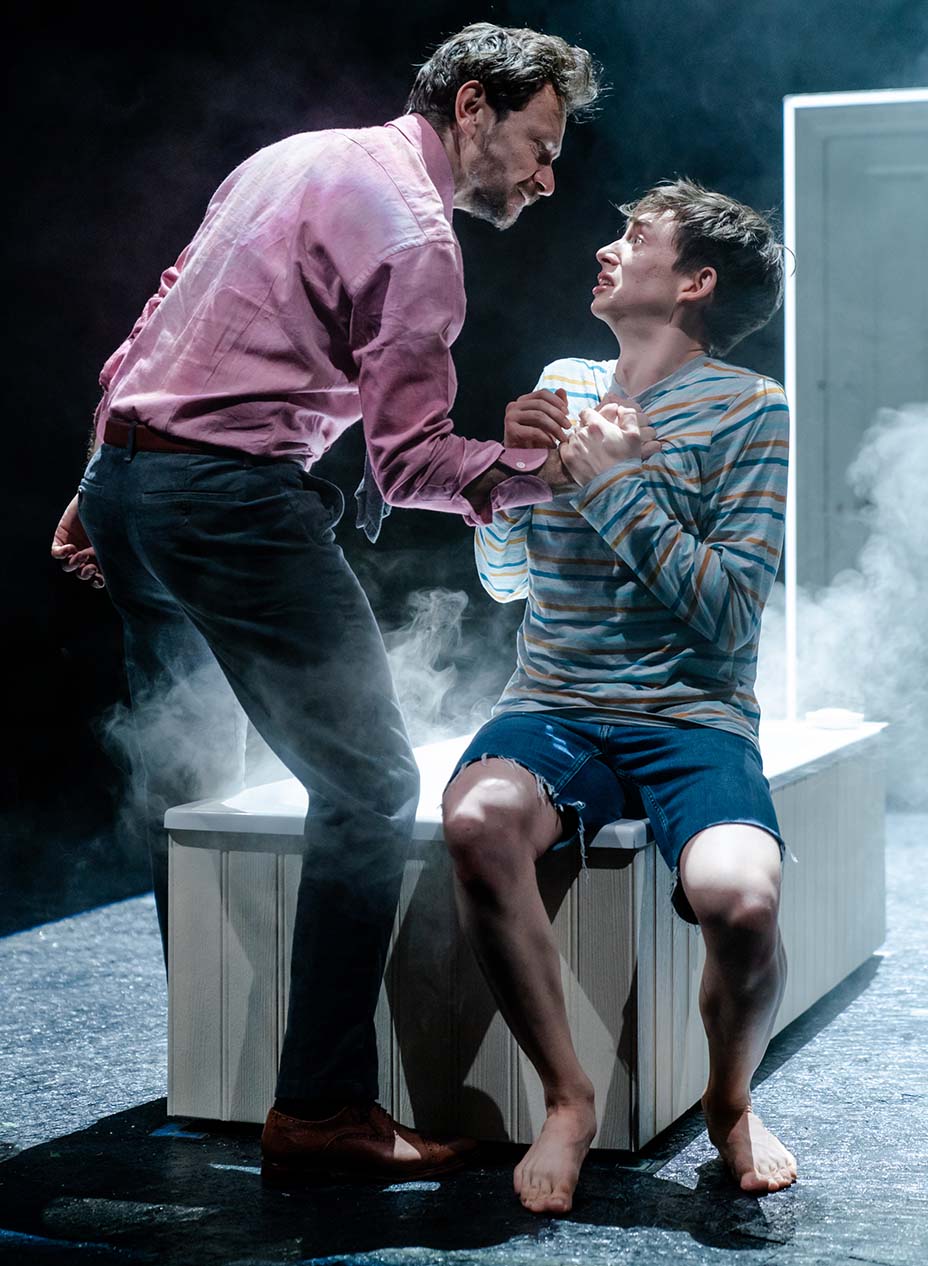