On paper, there’s much to whet the appetite about The Globe’s new Othello, not least the return of Mark Rylance to the theater where he was once artistic director and home to some of his most acclaimed performances, and his intriguing teaming with the American Andre Holland (Moonlight, The Knick). And yet this is an odd production, so racy, raucous and audience-friendly that it runs the risk of hardly being a tragedy at all.

Just a few months ago, Rylance was starring on Broadway in Farinelli and the King, penned and with music composed by his wife, Claire van Kampen. She’s now wearing the director’s hat, while retaining composing duties. Her approach to this play verges on the unusually jaunty.

The stance is typified by designer Jonathan Fensom’s costumes. In his turquoise tunic and red cap, and with a trim moustache, Rylance’s Iago looks like an elderly bellboy, the impression underlined by the fact that he’s constantly carrying things for his boss, more servant than soldier; as the speed of Iago’s scheming escalates and the peak of his cap is turned up accordingly, he could be stepping out of a farce.

Holland’s Othello is an elegant clothes horse, his high-collared jacket a shower of flowery adornment; Rodrigo (Steffan Donnelly) is a bit of a dandy; and Iago’s strong-willed wife, Emilia (the statuesque Sheila Atim), looks as though she’s stolen Grace Jones’ stylist, one effect of which is to call into question how she ever ended up with the shabby ensign. 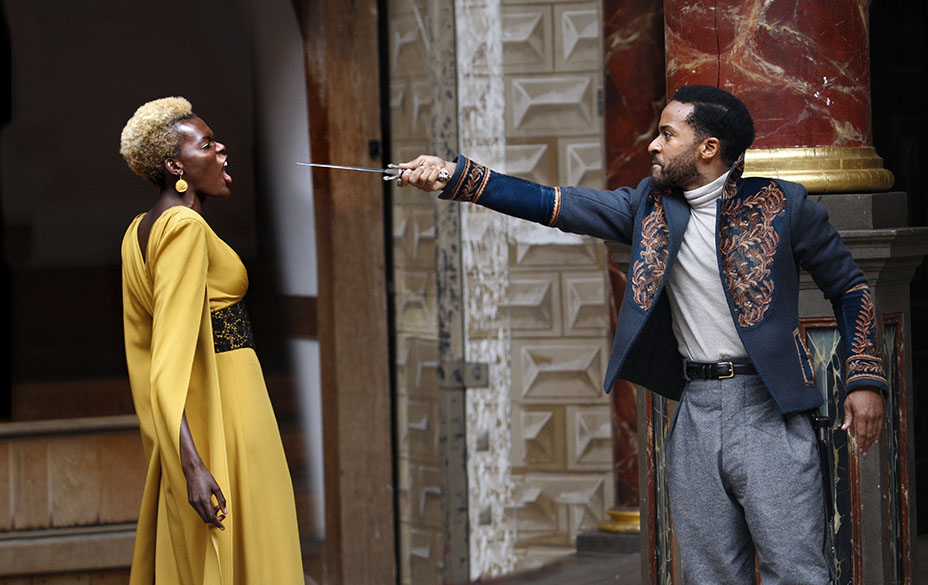 There’s no focused sense of period in the design, the emphasis being simply on gaiety. And the action is correspondingly light on its feet. Indeed, Rylance can’t keep still. This is an earthy Iago, brutishly simple in his prejudices, matter-of-fact and adaptable in his evil doing. When he manipulates Rodrigo to do his bidding, his hands are all over the other man, pulling and grappling; there’s a touch of the actor’s Rooster Byron from Jerusalem as he nudges Cassio (Aaron Pierre) toward drunken disgrace, the stage turning into a full-on party; with Othello, he simpers.

It would be natural to assume that actor and role were made for each other, with Rylance’s naturalistic, hesitant diction perfect for a man whose machinations are devised in the moment. But while the performance is entertaining, the tempo of actor and direction is all wrong. When Rylance played Richard III on this stage, the seductive, audience-confiding wit was accompanied by an eccentric and chilling evil; here, with too much of the character’s speech lost in constant motion, it’s difficult to feel the malevolence behind the machination. There are moments of stony-faced power, as when he keeps still to declare “I hate the Moor,” but they are too few.

There’s also little spark between Rylance and Holland. And while the American is a human and accessible Othello, he lacks the physical stature to make the Moor’s increasing rage feel threatening. This one goes out not with a bang, but a whimper.

Holland’s open American accent does set him apart in a way that’s apt for the character. This and a self-consciously pleasing air are reminders that while Othello’s military achievements have elevated him in Venetian society, his color keeps him apart. Long before the dreaded handkerchief, Iago has already touched on his general’s true weak spot — the fact that Desdemona chose Othello despite him being black.

Nevertheless, the tragedy is too long on the back burner, and it’s up to the women to really bring it home. The fate of Jessica Warbeck’s Desdemona is all the more heartbreaking because the actress has made her so very independent and forceful. And fresh from her Olivier award-winning, breakout performance in Girl From the North Country, Atim steals the show as Emilia, whose vehement defense of her mistress, calling out of her husband and tempestuous charisma carry all before her.

The fact that Atim’s energy makes us forget the fact that she’s dressed, rather jarringly, for the catwalk, is all the more credit to her — but indicative of an evening that sacrifices pathos for show.