In his adaptation of George Orwell’s 1984 (co-written and directed with Robert Icke), Duncan Macmillan showed skill at dramatizing the visceral, frequently disorienting ordeal of an unreliable narrator. The same applies with more startling intimacy in People, Places & Things, the British playwright’s immersive depiction of addiction and recovery, staged as a helter-skelter bout of physical and emotional struggle in Jeremy Herrin’s kinetic production. But the towering achievement here without doubt is Denise Gough’s explosive performance, playing an actress who has gone to extreme lengths to avoid self-knowledge, slowly accepting her vulnerability.

First seen at London’s National Theatre in fall 2015 before transferring to the West End the following year, this co-production with the innovative Headlong company thrust Irish actress Gough onto the map after years of toiling away in the theater trenches. Its seven-week American-premiere run at St. Ann’s Warehouse in Brooklyn precedes Gough’s Broadway debut early next year in the National’s revival of Tony Kushner’s Angels in America, co-starring with Andrew Garfield, Nathan Lane and Lee Pace.

Macmillan cleverly introduces Emma (Gough) during a performance of The Seagull in which she’s playing Nina while drunk or high or both, attempting to navigate the Chekhov character’s fourth-act despair as her own addled confusion takes over, leaving the castmate playing Konstantin stranded. That darkly humorous public meltdown segues directly to a thrashing nightclub interlude before the strobe lights give way to harsh fluorescents and Emma staggers around the reception desk of a drug and alcohol rehab facility where she’s checking herself in for treatment.

Only midway through this opening transition do we see the other half of the audience facing us across a square traverse staging, with set designer Bunny Christie’s white-tiled playing space enclosing the characters in scrutinized confinement. Those tiles warp and separate with the aid of hallucinatory video effects as Emma experiences the first woozy hit of withdrawal; soon after she multiplies into several Emmas, darting frantically around her room and in and out of the walls as the seizures worsen during detox. 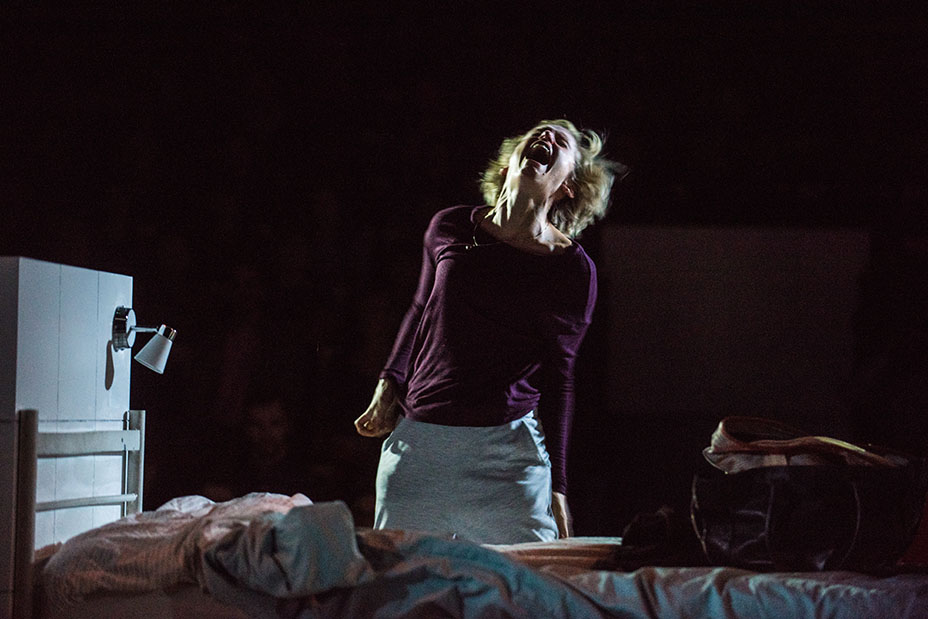 The vivid nature of Herrin’s staging makes this a highly theatrical production, but it’s the human core of Gough’s fearless performance that keeps you glued. Her Emma is a fiercely intelligent, argumentative woman, scornful of the 12-step platitudes of the recovery process. She’s also an atheist, causing her to chafe against any mention of a spiritual awakening. And despite the similarities with the workshop and rehearsal processes of an actor’s life, she refuses to participate in the shared confessions and role-play exercises of a group of fellow recovering addicts — the key component of the treatment.

Gough declines to make her flinty character sympathetic. Emma is surly and superior with the head doctor at the facility as well as the therapist, both of whom she says look and sound like her mother (all three are played with subtle distinctions by the terrific Barbara Marten). When she does begrudgingly participate, it’s with the half-hearted commitment of someone who expects just to fulfill the minimum 28-day requirement before being sent home with a certificate attesting that she’s ready to return to work.

Macmillan draws parallels between the addict’s traits of cunning and deception and the skill of the actor at creating different personae. This injects invigorating notes of sly humor, for instance when Emma tries to pass off the plot of Hedda Gabler as her backstory during a group session. Gough keeps us guessing as to the character’s sincerity when she points to the trauma of her brother’s untimely death, changing the circumstances more than once. And there’s deliberate ambiguity in her grand pronouncements about the screwed-up state of the world: “The moral ambivalence you have to have these days just to get out of bed.” Is she speaking in earnest or merely adopting the pose of the tortured nihilist? 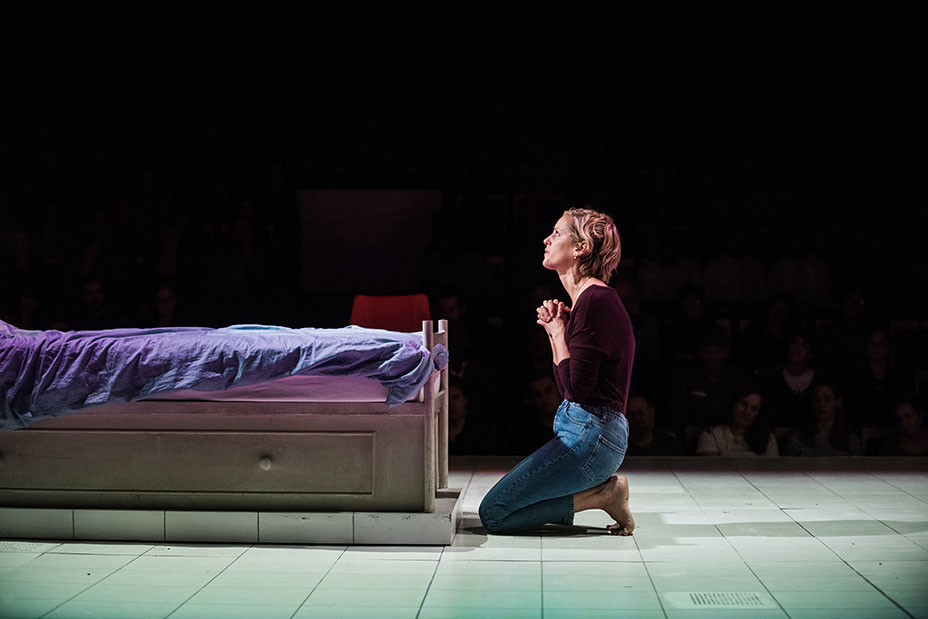 The most fully drawn of the group characters is Mark (played with warmth and tough-edged empathy by Nathaniel Martello-White), who’s far enough along in the process to call out Emma on her dishonesty. “We’re addicts because we have a toxic combination of low self-esteem and grandiosity,” he tells her, quoting recovery doctrine like someone who has sorted out the painful truths from the useless bromides. Only when Emma leaves the facility and readmits herself much later, after another self-destructive spiral, is she finally ready to put aside denial, relinquish the illusion of control and begin to do the required work.

While the group scenes can be somewhat repetitive and overwritten, the playwright strikes a considered balance between respect for the methods of recovery and skepticism about their limitations. Preparing addicts to go back into a real world rife with “people, places and things” to be avoided as potential relapse triggers almost sets them up for failure. However, Herrin’s directorial flourishes, impressive and bracingly physical as they often are, do tend to pad the text, making it seem stretched at two hours and 20 minutes.

But a quietly brutal scene near the end pulls it all together, in which a humbled Emma tackles a conversation with her mother (Marten) and father (Kevin McMonagle) that she has previously “practiced” with the group. The responses of her parents are not at all what she expected, providing a moving illustration that much of the damage done by addicts to people close to them cannot be undone.

The conflicting forces of defeat and determination, surrender and fragile strength that register across Gough’s face in that moment and the concluding scene that follows fully acknowledge the tricky complexities of Emma’s path. It’s a remarkable performance inhabited with tremendous vitality, allowing us to share in the intense highs, the devastating lows and the terrifying challenges of moving forward.