Despite persistent storms that caused competitive umbrella-shaking at entrances to both Bay Area art fairs, the sixth edition of FOG Design+Art and the third edition of Untitled San Francisco both opened strong in the last 48 hours, drawing well-heeled crowds to Fort Mason Center for Arts and Culture and Pier 35 of the Embarcadero, respectively, as well as to special performances by Patti Smith and Joan Jonas. Both fairs are open through Sunday.

Two sets of performances — timed to but not officially part of the fairs — were the talk of the town. Patti Smith performed twice Thursday night at the San Francisco Art Institute in honor of her photography show Wing, on view there through Saturday. The exhibition, presented by the gallery kurimanzutto, documents Smith’s reverence for fellow artists William S. Burroughs, Hermann Hesse, John Keats — and especially Frida Kahlo and Diego Rivera — through more than 30 of Smith’s photographs of her muses’ personal objects and home interiors.

Smith and her longtime bandmate Lenny Kaye performed directly below Rivera’s 1931 mural “The Making of a Fresco Showing the Building of a City,” which covers one wall of the vaulted exhibition space. Before a by-invitation-only audience of 100 art world insiders, Smith talked about her creative life: reading excerpts from sections of her best-selling memoirs detailing her more than half-century obsession with Kahlo and Rivera (“She and Diego were my secret guides at 16,” she said); recounting some funny moments with the late artist Robert Mapplethorpe when both were young and struggling; and singing some of her greatest hits, including “Beneath the Southern Cross,” which she dedicated to her late friend Sam Shepard, the playwright and actor. 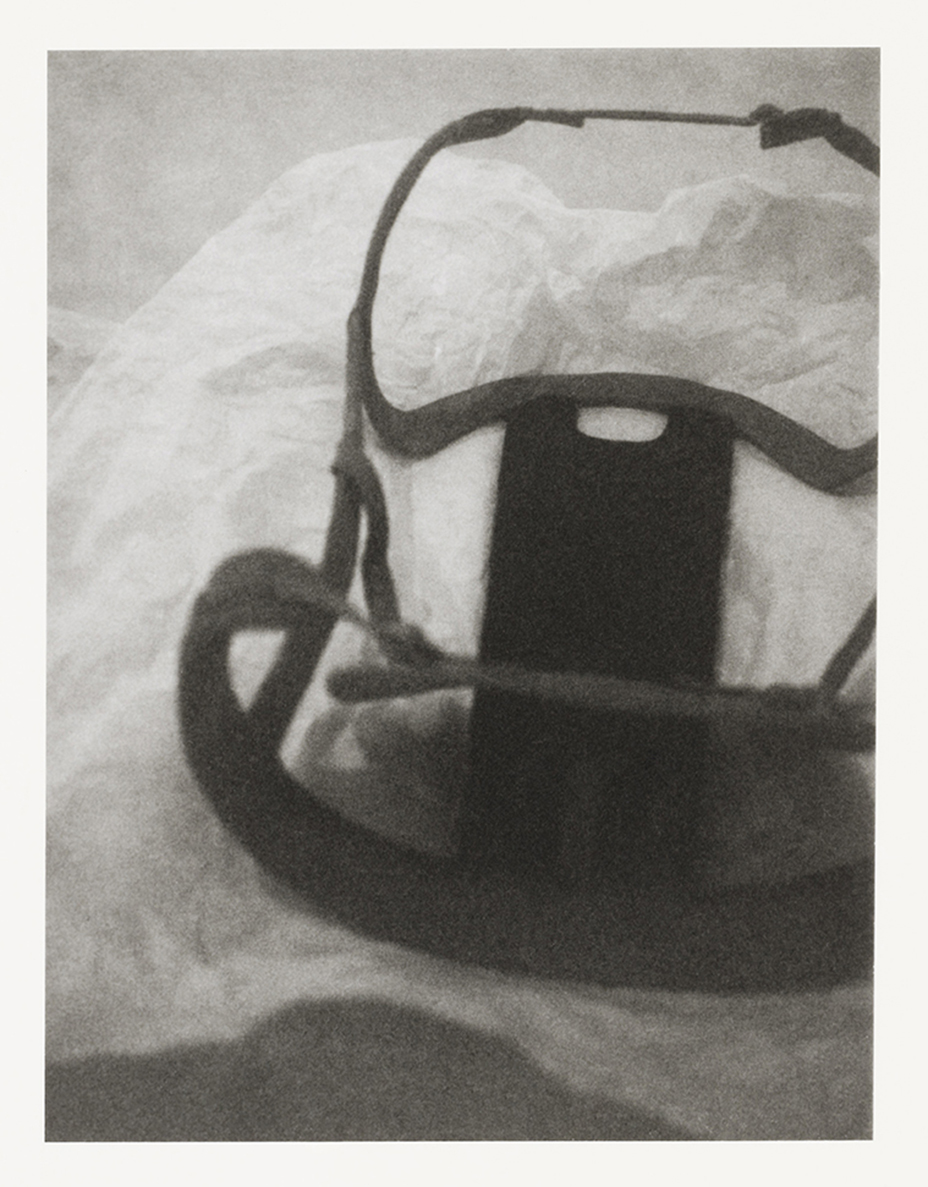 The octogenarian avant-garde artist Joan Jonas — a pioneer of using video and film as “high art” — also gave several performances and a talk related to this week’s U.S. premiere of her acclaimed multimedia installation, originally commissioned when she represented the U.S. at the 2015 Venice Biennale. “They Come to Us Without a Word” is on view through March 10 as a loan from San Francisco art patrons Pamela and Richard Kramlich.

At FOG, L.A. gallerist David Kordansky‘s presentation included cinematically tense photographs by the Norway-born, L.A.-based Torbjorn Rodland (collected by Scarlett Johansson) and artwork by L.A. artist Kathryn Andrews, who will be the subject of a solo presentation of brand-new works from 2019 in the gallery’s booth at Frieze LA next month, Kordansky tells The Hollywood Reporter.

One of the most arresting booths at FOG is from San Francisco gallerist Cheryl Haines. Adorned in a fantastic black hat atop her trademark blue ombre tresses, the gallerist presided over her confident presentation of one work: “Forever Bicycles” (2013), a colossal brass-colored sculpture of interconnected bike frames from Chinese artist Ai Wei Wei’s series exploring the how the mass production of two-wheelers relates to Chinese culture. Ai’s work has pervaded Los Angeles over the last several months, with shows at UTA’s Beverly Hills space (dedicated to his late agent Josh Roth), the Marciano Foundation and Jeffrey Deitch’s Frank Gehry-designed gallery in Hollywood. The FOG installation features matching wallpaper that renders the Twitter bird logo (reimaged in 3D) and other shapes in brass and turns them into a nearly decorative patterning.

One of several galleries doing double duty at both fairs, Haines’ nonprofit For Site Foundation is proffering at Untitled an array of art objects — all multiples — from a diverse array of artists like Ai, Trevor Paglen, Stephanie Syjuco and others who have worked on For Site’s celebrated public art commissions around San Francisco, such as Ai’s famous Alcatraz project in 2014.

Untitled also drew leading regional collectors, many of whom are opening their homes this week so VIP visitors to both fairs can view their collections. Anne Ellegood (co-curator of “Made in LA 2018,” the Hammer Museum’s biennial show) as well as Thomas Campbell and the top tier of SFMoMA leadership were also seen browsing the aisles alongside Uber CEO Dara Khosrowshahi and Bay Area real estate shark Justin Fichelson of Bravo’s Million Dollar Listing.

At New York gallerist Nancy Hoffman’s booth at Untitled, a swarm of women took selfies with San Francisco artist Michele Pred in front of her fast-selling vintage purses that use electroluminescent wire to flash illuminated feminist messages, including “Time’s Up,” the rallying cry of the anti-harassment organization whose founding donors include Jennifer Aniston, Sandra Bullock, Shonda Rhimes, Meryl Streep, Lena Dunham, Taylor Swift, Oprah Winfrey and Jessica Biel. The handbags first caught the eye of THR when Tony winner Sarah Jones carried a Pred purse (“Believe Women”) to the premiere of her play Sell/Buy/Date at L.A.’s LGBT Center in October. The handbags in Pred’s Power of the Purse series are meant to “serve as small-scale political billboards,” says the artist, who notes that Angela Bassett, Hilary Clinton and Amy Schumer are also fans. 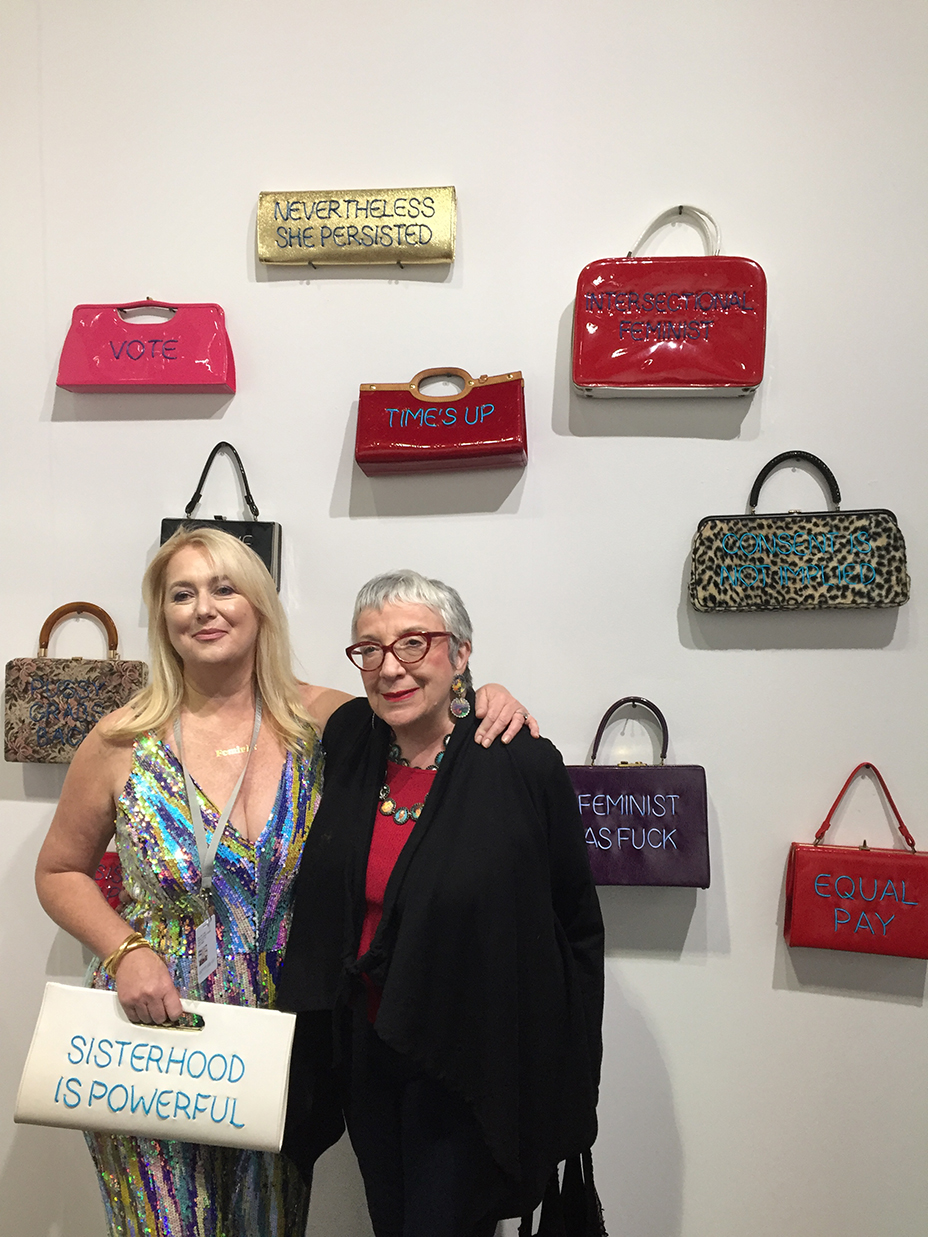 Gallerist David Zwirner’s booth at Untitled was almost entirely devoted to 30 years of photographs (including a selection of Polaroids) by Philip-Lorca diCorcia, including some from his nearly 20 years of editorial photography for W magazine.

Also at Untitled, L.A. gallery Zevitas Marcus has a double presentation: landscapes and interiors painted in a tight palette of blue and tan with gold and silver leaf from Kimberly Brooks (wife of Albert Brooks), and multimedia works from Taravat Talepasand. And OCHI Projects, located in L.A.’s burgeoning Mid City arts district, has brought north a showcase of all L.A.-based artists, two of whom — Ben Sanders and Adam Beris — the gallery will be presenting as a dual show in its booth next month at Santa Monica’s Art Los Angeles Contemporary. 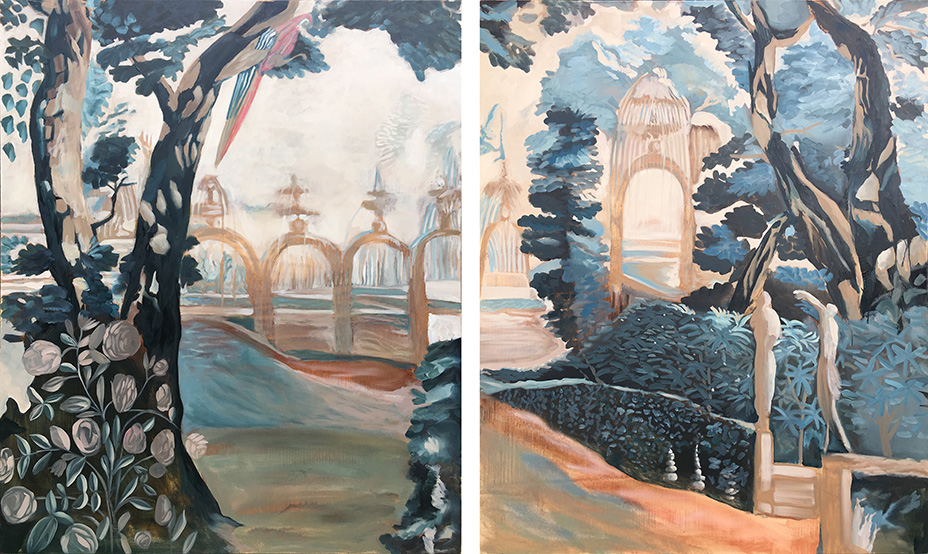