Wearing their signature balaclava face masks, the women gave an hourlong show in front of a large screen, where images of variously desolate spaces — snowy fields, abandoned parking garages — and surgical-style footage of what looked like the inside of a bodily orifice appeared in staccato bursts alongside short but provocative phrases (“Kill the Other,” “Too Big to Fail,” “You Torture Yourself Elegantly”) in the style of visual artist Barbara Kruger. A strobe light flickered powerful white light straight into the eyes of the audience, but all the visual and audio stimulation sadly wasn’t enough to get the crowd — most seemingly two or three times the age of the performers — off their feet. The Broad proved no place for a mosh pit.

The concert followed “Artists Talk: Artists, Activism, Agency,” a panel discussion with the band’s Nadya Tolokonnikova and visual artists Shepard Fairey, Catherine Opie and Tavares Strachan. The group spoke about the intersection of politics, activism, art and language, referring frequently, if sometimes obliquely, to the current chasms and corruption of national politics and delving at length into their own personal political awakenings, and the role the visual and performing arts played in them. 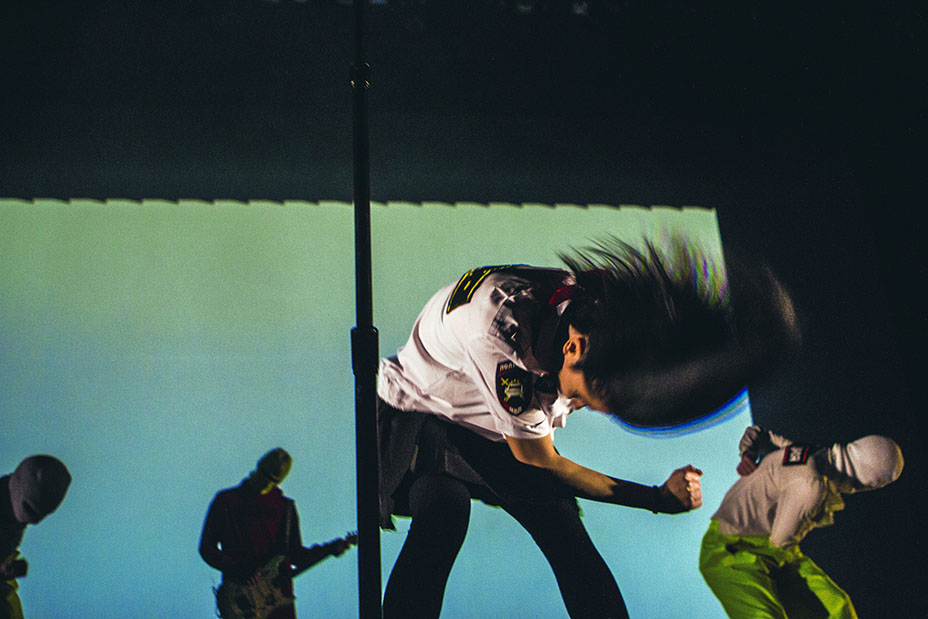 Pussy Riot’s music (some reportedly written on the plane to L.A., one of the bandmembers apparently confessed) proved an eclectic, genre-bending mix of classic punk, rap, hip-hop, hard rock, K-Pop and even included a sinisterly girly twist on the lullaby, “London Bridge is Falling Down.” The music will be released to the public this spring.

At one point, as the music raged, a scrolling chyron set against a roiling image of computer code detailed the band’s central message of vigilance about corruption, media suppression and growing autocracy. “There is a real possibility we could go to prison for these songs,” the message read.

Although Pussy Riot first rose to fame in 2011 for its guerilla performances and activism criticizing Russian President Vladimir Putin, the group has garnered fans around the globe as its outspoken messages address broader issues, including feminism, LGBTQ rights and free speech. The band has engaged with American politics too; two weeks before the 2016 presidential election, Pussy Riot seemed to anticipate the outcome before many domestic pundits did. The band released its dystopic video “Make America Great Again,” portraying a President Trump exerting control through beatings, shaming and physical branding.

The costumes — both onstage and in the onscreen images — evoked torturers and the tortured, oppressors and the oppressed: the “Jason mask” from the hit horror franchise Halloween; the Ku Klux Klan; the TSA; Little Red Riding Hood; Edvard Munch’s The Scream; the fetishized uniform of school girls everywhere; scenes from Abu Ghraib; the hoodies of Trayvon Martin and other young black men killed before their time; and every convenience store robbery, ever.

Moderator Jonathan T.D. Neil,  founding director of Sotheby’s Institute of Art in Los Angeles, began the night’s discussion by asking the panelists what role the punk  aesthetic/anti-aesthetic had in shaping their development as artists.

Tolokonnikova, 29, who, along with two of her Pussy Riot bandmates, was jailed in Russia for performing without permission in 2012 at Moscow’s Cathedral of Christ the Savior, said she came to punk at the age of 20, when she was “already quite old,” which drew laughter from audience.

“We were aware of the revolutionary impulse of punk,” she said.

Fairey — the artist, activist and illustrator whose portrait of then-candidate Barack Obama became an iconic image of the 2008 campaign — recalled growing up in a sheltered community in South Carolina, where he said he found meaning as a young man in the only two alternative worlds available to him at the time: punk and skate culture. “Skate and punk were the perfect marriage,” he said, recalling that he was kicked out of school for repeatedly skateboarding on campus.

The panelists spoke about punk’s allure as a “transgressive” mode of communication, particularly when confronted with bureaucratic malfeasance.  “When your government starts behaving like an idiot — I think it’s happening with you now,” Tolokonnikova said, to loud applause, “We’re ready to give you the truth for free.”

The Bahamas-born Strachan, who trained as a cosmonaut in Russia and has been artist in residence at the Allen Institute (founded by late Microsoft co-founder Paul Allen) and collaborated on a project with Elon Musk’s SpaceX, said the conversation about punk led naturally to a larger discussion about culture, which he suggested was inevitably a balancing act between honoring the traditions of one’s past with the yearnings for a different future. “Culture is about figuring out where you sit on that spectrum of tradition versus transgression,” he said. “You have to contend with what happened before, and figure out where you’re headed.” Strachan’s performative artwork has included stunts like filling nearly 300 craters in the California desert with neon tubes that can be seen from space and FedEx-ing a nearly five-ton block of ice from the Arctic to his elementary school in the Bahamas. (He shows with the gallery Regen Projects in Los Angeles)

When asked what abstract ideas most informed her thinking about the work that Pussy Riot does, Tolokonnikova shot back, “Fuck abstract ideas.”

Opie — the photographer, filmmaker, UCLA professor and MOCA board member who was honored alongside Guillermo del Toro at LACMA’s Art + Film Gala last year — spoke about “the aesthetics of resistance” as part of her efforts to shape ideas of representation, both as an artist and a pioneer in LGBTQ culture. With the increasingly toxic climate that prevails across a wide spectrum of social media platforms, she said, it’s “important to examine language right now.”

“There is an intolerance of human beings on social media,” added Opie, who trotted out her nerd creds, telling the crowd that unlike her co-panelists she had been raised listening to The Kingston Trio and hanging out with people who “performed in a capella groups.”

When asked about the Russian avant-garde art movement that inspired her, Tolokonnikova spoke about the dangers of elevating art — any art — too much. She pointed out that, much like an artist does, Stalin had tried to create a utopia after his own vision. “Stalin followed the avant garde aesthetic,” she said, “He was trying to make a personal utopia. It shows you shouldn’t give too much power to one individual.”

“I’m trying to remind myself to be humble,” Tolokonnikova added, to much laughter, “I don’t want to end up like Stalin.”

Pussy Riot will be headlining at festivals soon in Florida, Spain and South America. 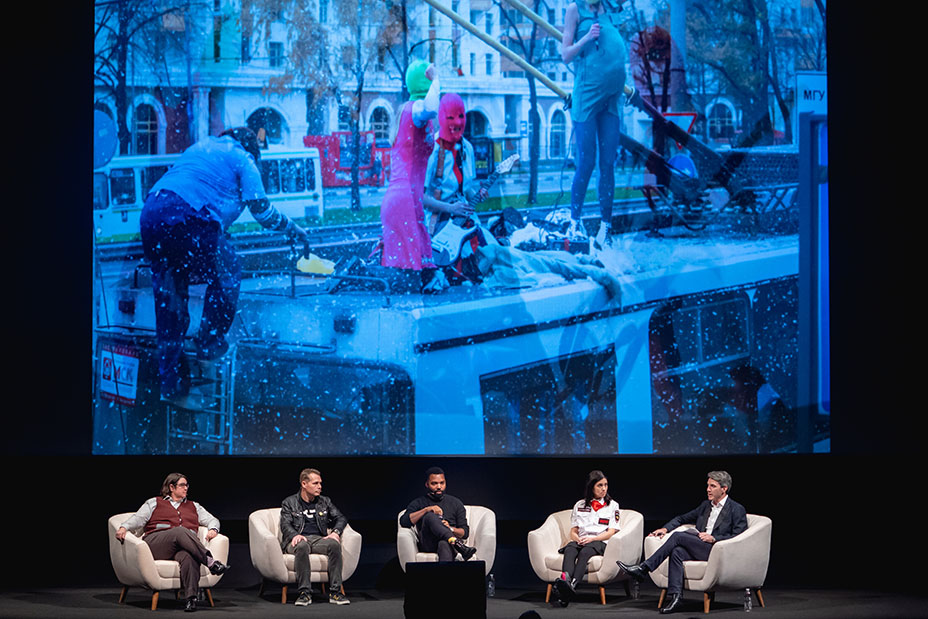