After a rash of East Coast appearances to promote his book The Briefing: Politics, the Press and the President (Regnery), Spicer made his way west where, typically, there are fewer members of the media chronicling every high and low moment of a book tour. He seemed relatively relaxed after a Sunday stop at the Ronald Reagan Library in Simi Valley, where he posed for photos under the airplane that served as Air Force One for seven presidents from 1973-2001. On Monday, Spicer made an afternoon appearance at the David Horowitz Freedom Center in Beverly Hills before heading to Yorba Linda for an evening event that attracted roughly 400 people who paid between $22 and $39 each, not including the cost of a book.

Joe Lopez, a spokesman for the Nixon Library, said it was not a sell-out (which means it was not the largest crowd to ever attend an event there). Nevertheless, as Spicer emerged, the room was nearly full and rippling with energy.

When moderator Elex Michaelson, a host of Good Day LA on Fox11, began his first question, the heckling started. From the front of the room, it was not easy to hear what the hecklers were yelling, but the first one seemed to start his cry with “While they were paying you!”

The crowed started shouting down this person with “Shame on you!” Security led him out, and Spicer quipped, “I hope he at least bought the book.” That heckler was followed by two more, apparently part of a group called Unofficial: DNC that streamed their protest live on Facebook.

With the room calmed, Spicer said it brought to mind an exhibit he’d seen earlier: “You’re sitting there watching President Nixon during Vietnam, who said, ‘We can’t learn from each other until we stop shouting at each other.’

“I’d rather have people go out if they don’t like this president or administration, go out and vote for their preferred candidate,” he continued. “There are a lot of people in this country who agree with what this president is doing.”

Spicer served as Trump’s press secretary from January-July 2017. Prior to that, he had been the communications director for the Republican National Committee.

Among other topics broached during Spicer’s talk was his most infamous day in the White House, when he insisted in the face of overwhelming evidence to the contrary that the crowd at Trump’s inauguration was larger than that of President Barack Obama’s.

Spicer began by talking about the mood that first weekend inside the White House. “I wake up the next day to a call from the president,” he recounted. Trump told him, “‘There are these panels on saying no one was there. This was not well-attended. We’ve got to push back on this. This is ridiculous,’ related Spicer. “Here we are 24 hours in and it’s like, ‘Guess what else we’re going to get you on.'” 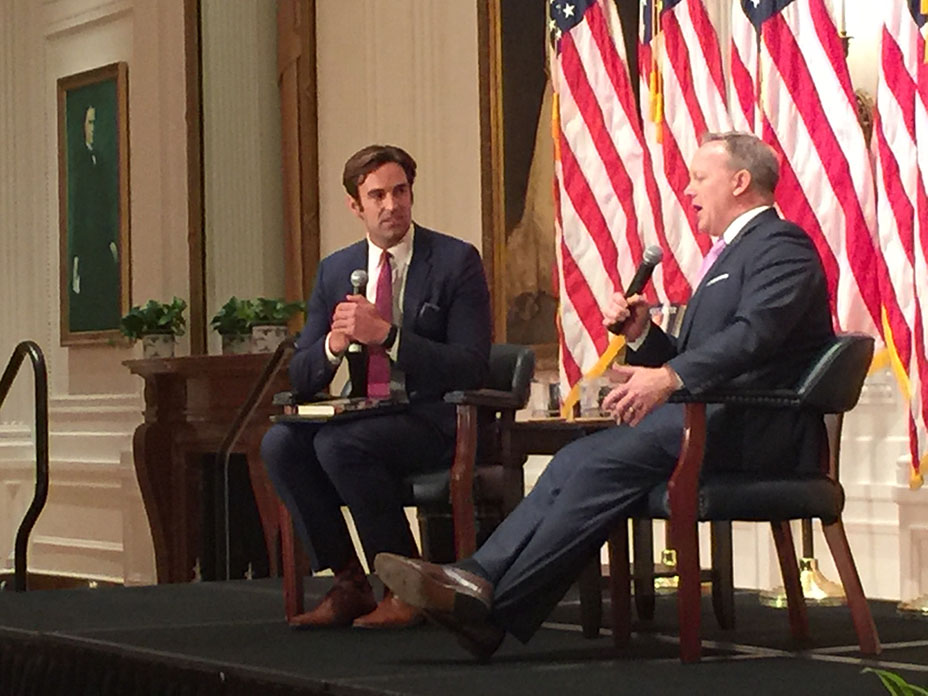 Spicer paused for an aside. “Let me just say, if I could have a do-over of any day of my life, I don’t like the tone I used — people go, ‘What would you have done differently?’ I’m like, ‘everything.’ … I’m not excusing it. I’m trying to explain the mentality.”

But, Spicer admitted, “That definitely was not the best way to deal with that.”

Despite his departure, Trump still calls Spicer “as often as he likes,” according to Spicer. He said he had spoken with the president two weeks ago “keeping him up with the book, what’s been going on.”

Given the setting, with large portraits nearby of Nixon, who resigned the presidency in 1974 amidst investigations into the Watergate scandal, the most revelatory topic was the comparisons between Nixon and Trump, who is governing amidst a different set of investigations.

“They are both fighters,” Spicer said. “They both are underestimated a lot. They both know how to combat. They both fight to win, and they both in a lot of cases feel under attack. If you look at what Nixon did in China, it was ‘I know what I want to do and I know what the right thing to do is and I’m going to do it.’ And, in many cases, President Trump’s view is ‘I don’t care what you all think. I know what the right thing is to do for the country and I’m going to do it.’ And he doesn’t care about norms.”

Another Nixon-related question for Spicer came in via Twitter: “If you could have asked President Nixon’s press secretary Ron Ziegler for advice, what would you have asked him?”

“Thank God he didn’t have the internet,” Spicer joked before answering directly. “How did you mentally deal? That was the hardest part for me. Logistically you can prepare as much as you want, but when you are under that kind of fire, were there any outlets you used to keep yourself centered?”

Soon, one more audience member in a pro-Trump T-shirt tried to ask an unfocused Russia-related question, even though he had not been recognized by the moderator. Security led him out, leaving a total of four ejections.

“That’s why I wrote the book.” Spicer said. “Now you can see what I felt and thought, and if you still don’t like me, it’s a free country.”