It’s not a good sign when you’re watching a play about one of the most important philosophers in world history and you can’t wait for him to stop talking and die already. That, sadly, is the case with Socrates, the new drama by actor Tim Blake Nelson that attempts to bring this historical figure to theatrical life but mainly succeeds in boring the audience to tears. World-premiering at off-Broadway’s Public Theater, the play can certainly be commended for its intellectual rigor and astute illustration of the Socratic method. But it ultimately comes across as more rhetoric than drama, the equivalent of a very long homework assignment. Three hours long, to be exact.

That the evening succeeds at all is due to a superb starring turn by the brilliant Michael Stuhlbarg, who invests his portrayal with fierce intelligence, pathos and sly humor. The actor, who’s had stellar careers on both stage (Hamlet, The Pillowman) and screen (A Serious Man, Call Me by Your Name, both of which should have garnered him Oscar nominations) is consistently riveting even when the material is not.

The play takes the form of a story related by Socrates’ student Plato (Teagle F. Bougere) to a boy (Niall Cunningham) we could assume to be Aristotle. The boy has a dim view of Athenian society, describing it as “murderous” and citing the recent execution of its “greatest thinker” to prove his point. The scene then shifts to a boisterous gathering years earlier of Socrates and his fellow Athenian elites, including the playwright Aristophanes (Tom Nelis), in which the philosopher is playfully mocked for his excess girth and extreme fondness for nubile young boys. Socrates is also lauded at great length by his friend and possible lover Alcibiades (Austin Smith), who describes him as “a most unlikely deity among men.” 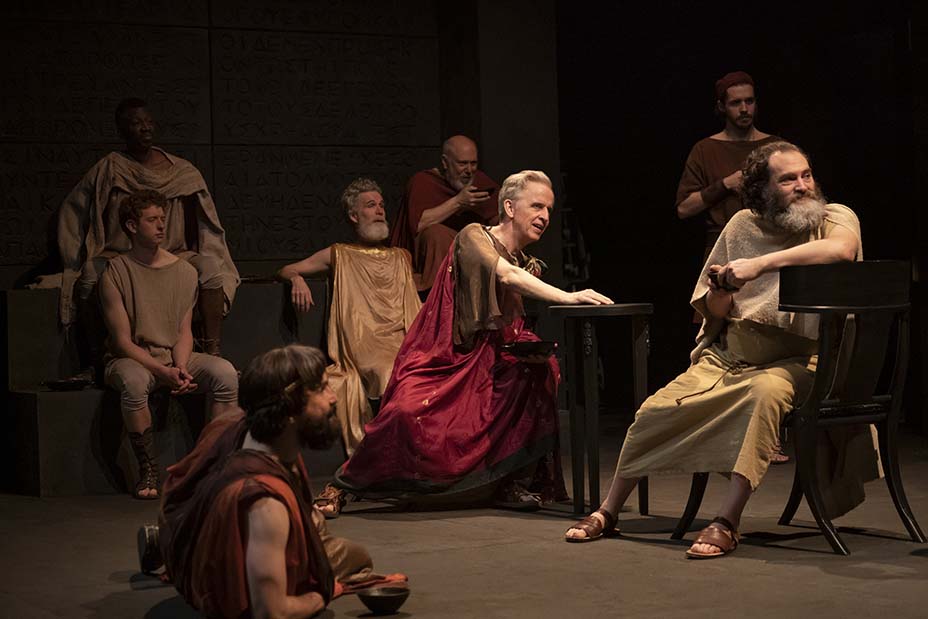 A good portion of the play’s seemingly endless first act is consumed by intense philosophical debate, sometimes incorporating passages from Plato’s dialogues. Much of it is intended to illustrate the reasons for Socrates’ estrangement from the Athenian leadership that led to his trial and execution. But even those straining mightily to absorb every word will sometimes find themselves lost in profuse verbiage that lacks dramatic or narrative momentum. If the play’s thesis is that Socrates was killed for asking so many damn questions, this is proven all too effectively.

The pace picks up significantly in the second act with Socrates’ trial, in which he barely bothers to defend himself. But even then, the playwright and director Doug Hughes (Doubt) strain our patience with such drawn-out bits of business as Socrates taking a very slow, leisurely bath. The death scene itself is as protracted as it is agonizing. Although presumably intended to emphasize the intense physical suffering the philosopher experienced after ingesting hemlock, it goes on for so long that we begin to feel less sympathy than impatience.

Indeed, maintaining focus throughout the long evening proves difficult. Nelson — best known for his starring roles in the Coen brothers’ films O Brother, Where Art Thou? and The Ballad of Buster Scruggs — has done noteworthy work as a playwright with The Grey Zone and Eyes of God, both of which he adapted into feature films that he also directed. But his ambitions here get the best of him. 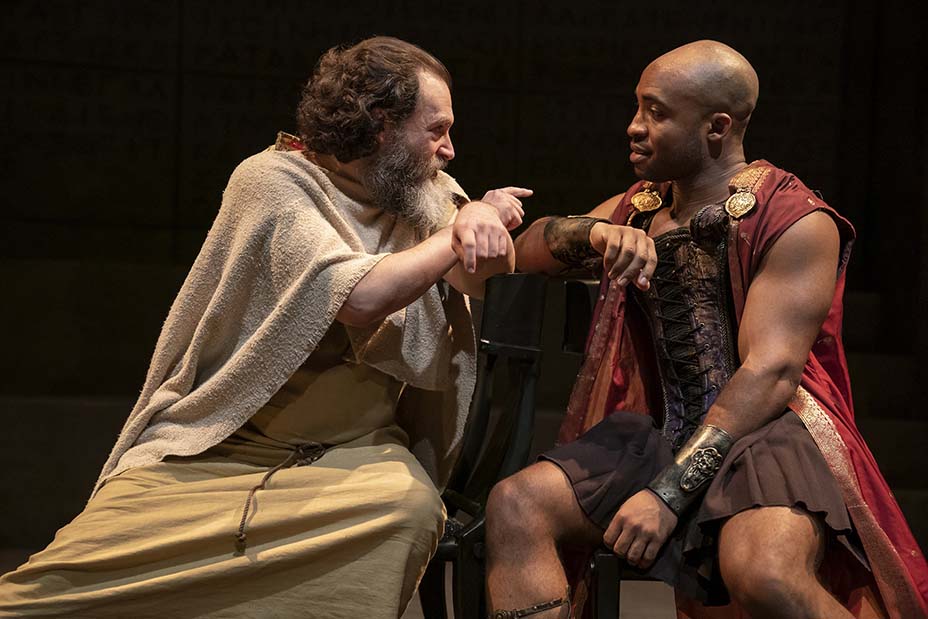 The diffuse narrative doesn’t take hold until well into the second act, and attempts to suggest parallels between the world of Ancient Greece and the current fractured state of our democracy feel forced. It’s also extremely difficult to tell the many characters apart, especially since several actors assume multiple roles. The large ensemble features a number of reliable supporting players including David Aaron Baker, Peter Jay Fernandez, Robert Joy and Lee Wilkof, but they mainly fade into the background. The sole female member of the cast, Miriam A. Hyman as Socrates’ wife Xanthippe, is similarly given too little to do.

Hughes’ mostly unfussy staging features some annoying quirks, such as having performers deliver lines from the rear and sides of the theater in a manner that’s meant to be environmental but mostly gives us neck strain. The frequent loud shouting emanating from various corners of the auditorium is enough to make you long for the relative peacefulness of subway stations at rush hour. Scenic designer Scott Pask has provided elegant panels featuring Greek lettering for both the stage and walls of the auditorium, and Catherine Zuber’s costumes are reflective of the period (it was a relief not to see the ancient Athenians wearing, say, Prada suits).

It’s no pleasure to disparage a drama with such admirable intellectual and thematic ambitions, not to mention one whose lead actor’s performance fairly demands to be seen. You might feel proud of yourself after sitting through Socrates; just be prepared for a very long sit.