In addition to his work writing for the stage and television — the latter including In Treatment, Vinyl and The Looming Tower — Adam Rapp’s bio lists him as the author of nine published novels, a detail not unrelated to his Broadway debut. The Sound Inside is an emotionally layered two-hander in which the process of writing, reading and analyzing fiction is an inextricable part of how we come to know and care about both characters, played with moving restraint by a superb Mary-Louise Parker and impressive newcomer Will Hochman. Directed with exquisite feeling and precision by David Cromer, this intimate drama manages to be both literary and rivetingly theatrical.

The production premiered with the same cast in summer 2018 at the Williamstown Theatre Festival and fits surprisingly well on the expansive stage at Studio 54. Silence and darkness are key elements in the play’s presentation, and Cromer works masterfully with his design collaborators — Alexander Woodward (sets), Heather Gilbert (lighting), Aaron Rhyne (projections) and Daniel Kluger (music and sound) — to coax scenes to life in isolated pockets of the blackened space, bathed in pools of suffused light. In a contemplative drama loaded with direct-address monologues, third-person narration and stories within the story, the director and playwright display an uncanny knack for drawing you in, as if providing access to the most private of thoughts and memories.

Playing Bella Baird, Parker emerges out of the darkness to introduce her character with these words: “A middle-aged professor of undergraduate Creative Writing at a prestigious Ivy League University stands before an audience of strangers. She can’t quite see them but they’re out there.” After dropping in some descriptive prose to suggest the literary designs behind this meta-theatrical approach, she continues: “Is this audience friendly, she wonders? Merciful? Are they easily distracted? Or will they hear this woman out?”

Parker commands the stage with such calm assurance that it’s hard to imagine anyone not being transfixed by Bella’s story and the unpredictable paths it takes. While constantly chiding herself for using devices she discourages in her students’ writing, she opens up her world to us, recapping her thoughts on God, her 10-year tenure at Yale, her pride in her carefully curated book collection: “I’m a whore for first editions.” In the same matter-of-fact tone, she describes doubling over in pain while rereading James Salter’s Light Years, and discovering a few days after emergency surgery that her stomach was riddled with malignant tumors. 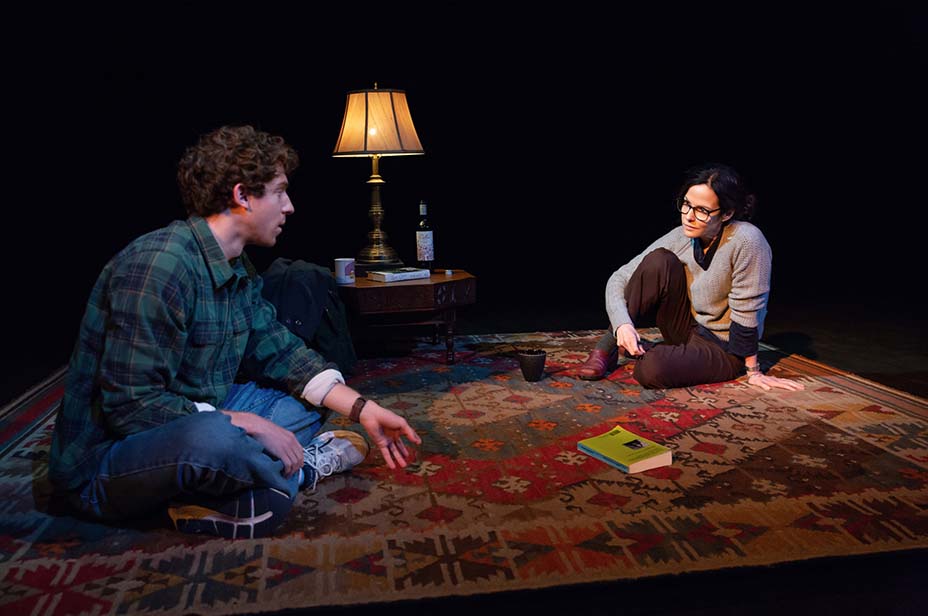 While explaining her treatment options — none of them promising — Bella recalls reading to her mother from her favorite Anne Tyler novel as illness ran its course and the unseen older woman “dissolved into nothingness. Like a patch of snow in a surprising, warm winter rain.” That sentence, like many in the play, reveals Bella sculpting words and images into prose as she speaks.

Around the same time as her cancer diagnosis, Bella first noticed a student named Christopher Dunn (Hochman). Up to that point, he had made no unsolicited contributions in class, but during a discussion of the double murder by Dostoyevsky’s antihero Raskolnikov in Crime and Punishment, Christopher blurted out, “Someday I’m going to write a moment like that.”

All that is revealed in the first 10 minutes or so, and if the opening makes the work sound dry and cerebral, it’s not. Rapp’s writing style here is rigorously unsentimental, but it’s also vital, compassionate and often funny in its own minor-key way.

Cromer brings the shifting two-character dynamic into play with uncommon grace as Bella’s office materializes in a boxed-in area center-stage and Christopher appears framed in the bright light of the open doorway. Their exchanges at first are spiky, with Bella ruffled by his refusal to follow the online appointment protocol and Christopher explaining that he doesn’t do email. She may or may not be mildly unsettled by the vehemence of his tirades about social media and campus café hipsters — “With their Civil War beards and artisanal body odor and those stupid fucking doorknobs in their ears” —  and his view that novelists these days have to be really good at Twitter or commit suicide to have their work matter. But he volunteers that he likes her class.

Parker straddles a wryly amusing line between Bella’s annoyance at Christopher’s impromptu office calls and her growing interest in him as an unusually intense misfit who lurches between moments of rage, unfiltered openness and absent drifts of distraction.

As he starts to describe the story of the novel he’s working on, she becomes more and more intrigued, and an uncertain bond begins to form between them, blurring the line between mentor/student and friends. The progression of his story — which he shares with Bella as it develops — suggests disturbing depths in him. But her growing sense of this complicated young man, who’s perhaps more willing to acknowledge his solitude than she is, also makes Bella intuit that he’s the right person to ask for help.

Any further details of the plot would mar the sobering surprises of this profoundly affecting and melancholy drama, as Christopher first agrees to Bella’s shocking request but then leaves the momentous task only half-finished. Rapp creates an enigmatic puzzle out of the very personal story Bella is crafting and the one written by Christopher, which also contains dark hints of autobiography embedded in its mounting dread. As their tales converge, their physical paths separate, and Rapp taps into themes of tragedy and redemption, sacrifice and loss, the bright blaze of artistic creation and the sadness of an unknowable stranger. Key elements of the story remain veiled in mystery, ambiguity, or fueled by impeccably controlled suspense, but the undercurrent, particularly in the final scenes, swells with genuine emotion.

This kind of penetrating intimacy is what Cromer does best as a director, notably in his Tony-winning work on The Band’s Visit and his revelatory off-Broadway production of Our Town. His transitions from scene to scene and from narration to action have a lithe fluidity that’s quite breathtaking, often indicating a change of setting with just the subtlest of outlines, like the silhouette of a tree becoming barely discernible in the darkness. 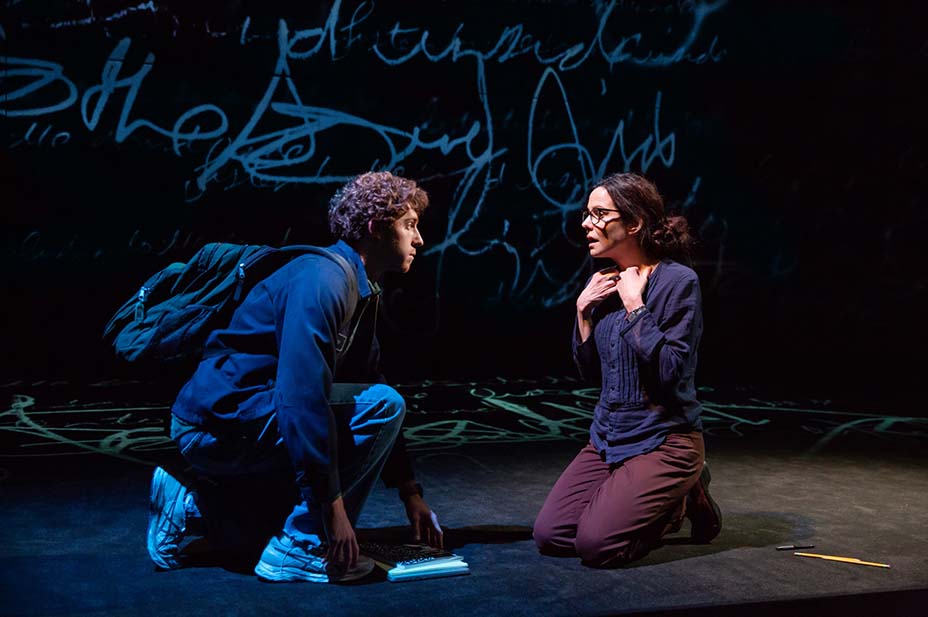 The playwright and director could hardly hope for two actors more in tune with the fragile balance required of this work of gossamer delicacy, which divulges its secrets in measured doses via two characters whose reliability as narrators is constantly called into question.

Hochman is a promising discovery, making Christopher bruised and defensive yet never self-pitying, aware only that he occupies his place in the world with awkwardness, uncertainty and sputtering bursts of anger. It’s a testament to the pathos of his vividly inhabited performance that while the most dramatic events around the character occur offstage, they resonate as if he were still present.

Parker is doing some of her best work in years, without a trace of the flaky affectations that can sometimes make her characters hard to take (like in the overpraised Heisenberg). Bella is assigned a heavy load by the playwright — planting clues, teasing outcomes that are often upended, breaking the dramatist’s cardinal rule by favoring tell over show. Parker plays her with the detached intellectual curiosity of a seasoned academic, even in moments when Bella contemplates her own fate. But she also brings the understated vulnerability of a woman facing her own mortality with an almost frightening purposefulness that masks her fear.

“Listen to the sound inside,” Bella scribbles over and over on a legal pad during a class writing exercise, the words floating in the air in Rhyne’s projections. Bella subsequently claims to have no idea what it means, yet it’s precisely what Rapp has done with his characters in this quiet stunner of a play, and what they in turn ask of us.