Street artist Shepard Fairey (of the Barack Obama “Hope” poster) is a double threat this season, taking over L.A.’s Library Street Collective with the largest show of his career, “Damages,” opening Nov. 11 — and seeing his work chronicled in Hulu doc Obey Giant that same day. Obey Giant, which counts James Franco among its executive producers, tracks Fairey’s rise from upper-middle-class kid in South Carolina to A-list practitioner of today’s most controversial art form (Fairey has a vandalism case against him pending in Michigan). “A lot of the new work uses rips, tears and layers as an aesthetic device and also as a metaphor for the transgressive, fractured state of things right now,” says Fairey, 47, during a break from installing the exhibit. The artist, who has designed film posters and practiced meditation with David Lynch, spoke to THR about the nexus of art, pop and politics. “Art doesn’t have to be the gazer on the sidelines,” he says. “Art can be thrown down in the middle of the dance floor.”

The “Hope” image has been widely imitated. What are some of your favorite parodies?

There was a great one at the Women’s March: Donald Trump done in that style but with his hair blowing in the wind so it looked like it could be a toupee. It just said, “There will be hell to pay.” Some parodies are coming from the same point of view and some from the opposing view, which is fine. It’s the way public discourse is supposed to work. 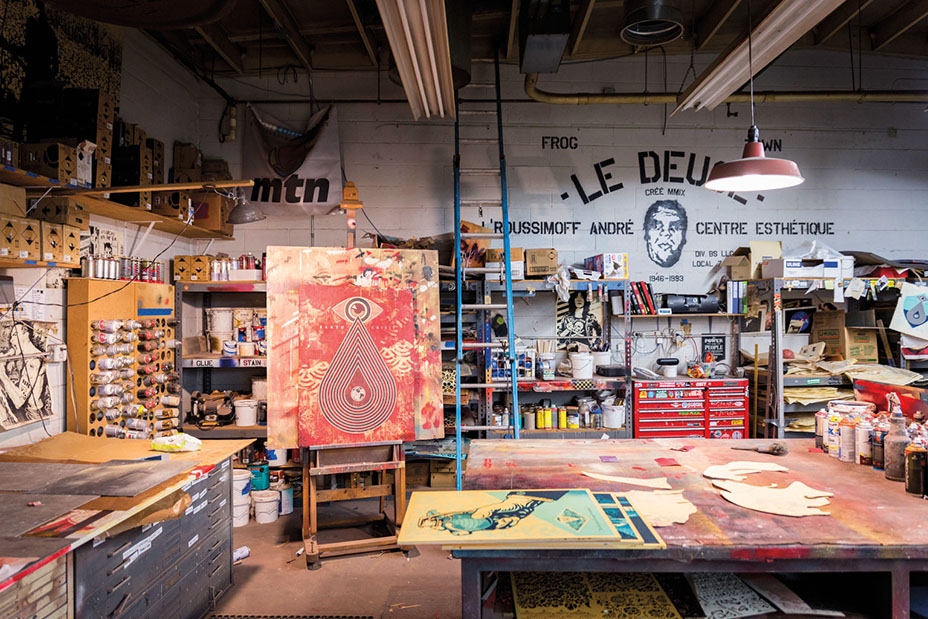 Is sexual harassment, a topic that’s roiling Hollywood, a subject of your new show?

Sexual harassment is a symptom of gender inequality. I’m trying to address social injustice in a lot of different ways, and that falls under the umbrella of looking at gender inequality and sexism overall.

You did posters for movies like Walk the Line and War for the Planet of the Apes. Beyond Obey Giant, has there been Hollywood interest in your life and work?

I also creative-directed some of the stuff for the new Al Gore movie on climate change [An Inconvenient Sequel]. People have thrown around the idea of a biopic [of me], but I’m still making new stuff. The whole story isn’t ready. I love movies. It’s the most influential medium. Escapism entertainment, it’s not how I want to spend my time. But there are things that are thought-provoking, that are entertaining, like Planet of the Apes. I’m always open to working on the right Hollywood project. It’s exciting to have that kind of megaphone.