A joyously camp Cinderella update which launched Baz Luhrmann’s movie-directing career, Strictly Ballroom has plotted a bumpy trajectory from stage to screen and back again. Initially a 1984 fringe theater show, then a beloved 1992 film, this sequin-studded fairy tale first resurfaced as a stage musical in Sydney in 2014. A revised version made its U.K. debut at the West Yorkshire Playhouse in Leeds two years later. After more tinkering, director-choreographer Drew McOnie’s production has finally opened in London to mixed reviews. Lurid, colorful and bursting with energy, Luhrmann’s kitsch comedy classic remains an unashamedly fun romp. But some of its playfully ironic charm has been lost in the journey from warm-hearted underdog fable to brash, boisterous West End spectacle.

Luhrmann’s musical has been substantially tweaked since its Sydney and Leeds runs. A handful of original songs by Australian composer Eddie Perfect have now been dropped, as has a revised book by Olivier-winning dramatist Terry Johnson. But the biggest change in this London reboot is the addition of a new narrator character, Wally Strand, played by British pop singer Will Young. Propelled to fame in 2002 by TV talent show Pop Idol, the U.K. blueprint for American Idol, Young has since balanced a successful music career with sporadic stage and screen roles. In 2013 he earned plaudits and award nominations for playing the Emcee in a 2013 touring production of Cabaret, a clear influence on his Strictly Ballroom persona. 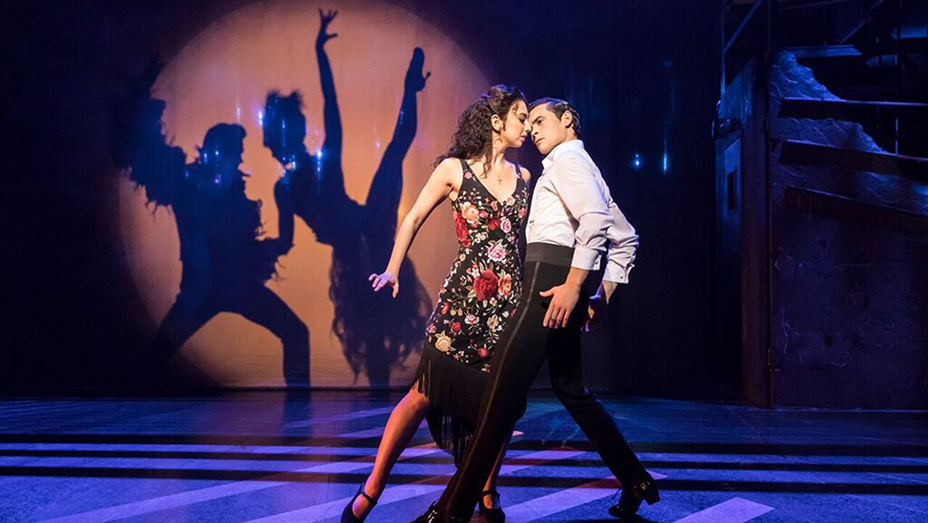 Onstage for almost the entire two-hours-plus duration, Wally serves as a one-man Greek chorus, setting up scenes, making audience-winking jokes and performing a near-constant medley of hits in cabaret lounge-jazz arrangements. Heaping lead vocal duties onto a single character is a smart idea, lending the play tighter narrative structure and leaving the main cast free to dance with fully focused energy. But Young’s anodyne boy-next-door image is a bad fit for a front-man role that demands more magnetic charisma, and his unremarkable pop-soul voice does little for an unashamedly overblown production that should be powered by high-energy sing-along anthems. While his fame will fill seats, his low-voltage performance disappoints.

In familiar Luhrmann style, the show’s musical mixtape is an overstuffed patchwork of vintage pop hits, antique standards and classical snippets. Fragments of David Bowie, Whitney Houston, Billy Idol, Cyndi Lauper, Bob Marley, Public Enemy and more blend seamlessly into bursts of Strauss, Bizet and Grieg. Orchestrated by Simon Hale, who reworked Bob Dylan’s canon for Conor McPherson’s highly feted stage musical Girl From the North Country, and arranged by Marius de Vries, who previously worked with Luhrmann on Romeo + Juliet and Moulin Rouge!, this eclectic score is played live by a jazzy sextet onstage throughout. The band prove stylistically versatile but, once again, oddly restrained for such a big show. A little more roof-raising razzmatazz would have suited the overall tone better.

Standing out from the gallery of purposely overblown grotesques with fake tans and preposterous wigs, Francolini makes Shirley a compellingly monstrous caricature straight out of Hairspray via Absolutely Fabulous. Horan’s depiction of Barry Fife is also great fun, and clearly indebted to the late Australian screen icon Bill Hunter from Luhrmann’s original film cast. But the main acting honors belong to Strallen, younger sister of established West End stars Summer and Scarlett Strallen, who proves she has inherited the family talent gene with a layered performance that sees her blossom from dowdy caterpillar to dazzling butterfly. Her transformation is all the more striking since it requires both technically superb dancing skills and the ability to fake terrible dancing skills.

McOnie’s production is full of classy ingredients, but ultimately more a triumph of technical flair over subtlety or charm. It ends on an oddly jarring note with Young commanding the audience to rise to their feet, demanding our applause instead of earning it. Celebration tinged with desperation? That’s never a winning combination.