Tom Brady and his New England Patriots took home the Vince Lombardi trophy for a sixth time — after the lowest-scoring Super Bowl matchup ever, and the lowest-rated in 10 years (98.2 million watched on CBS; 2.6 million more streamed the game). But Cardi B arguably won the weekend in Atlanta, without ever setting foot in Mercedes-Benz Stadium. Having turned down an offer to perform during the halftime show out of solidarity with quarterback-turned-activist Colin Kaepernick (Maroon 5 and Travis Scott took the stage instead), the superstar rapper from the Bronx grabbed her share of the spotlight anyway by performing and appearing at a slew of events — including a headline-generating showing at Michael Rubin’s Fanatics party Feb. 2 at the College Football Hall of Fame.

During her late-afternoon set, which followed rapper Meek Mill, 77-year-old Patriots owner Robert Kraft hopped toward center stage and danced around Cardi — at one point nearly backing into the Grammy-nominated star. Witnesses to the curious encounter included Kevin Hart and WME’s Richard Weitz. Cardi took it all in stride but later told a reporter that she had no plans to watch Kraft’s team play in the Super Bowl. “I’ve got so many events, I’m not going to have [time],” she said. (She also appeared at Planet Pepsi’s Feb. 1 concert with Scott and performed at the Bud Light Super Bowl Music Festival with Bruno Mars on Feb. 2.) Online, critics found time to weigh in on the Cardi and Kraft’s appearance together: Kraft is a known supporter of President Donald Trump, while Cardi has been one of Trump’s harshest critics on Twitter. 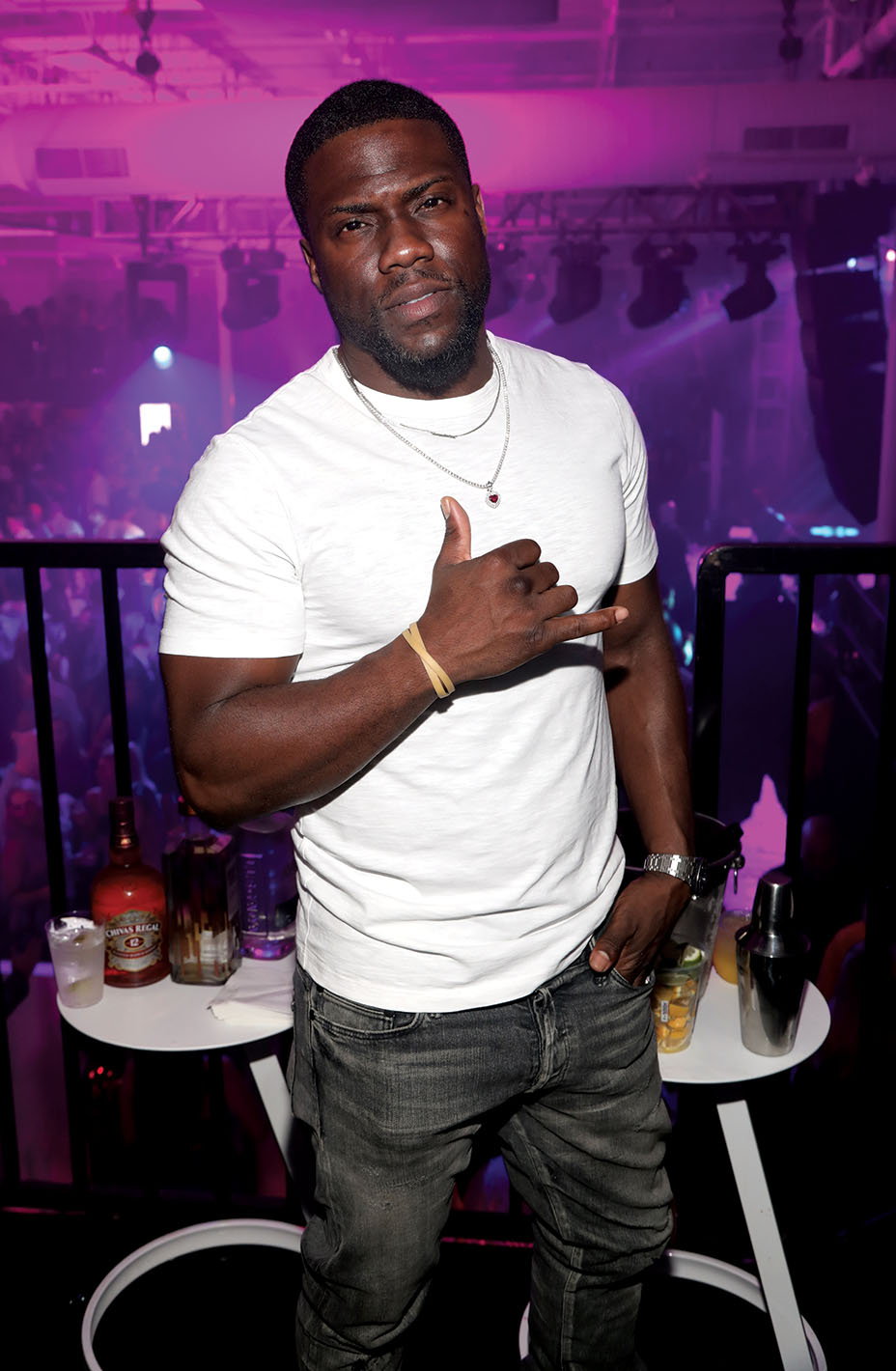 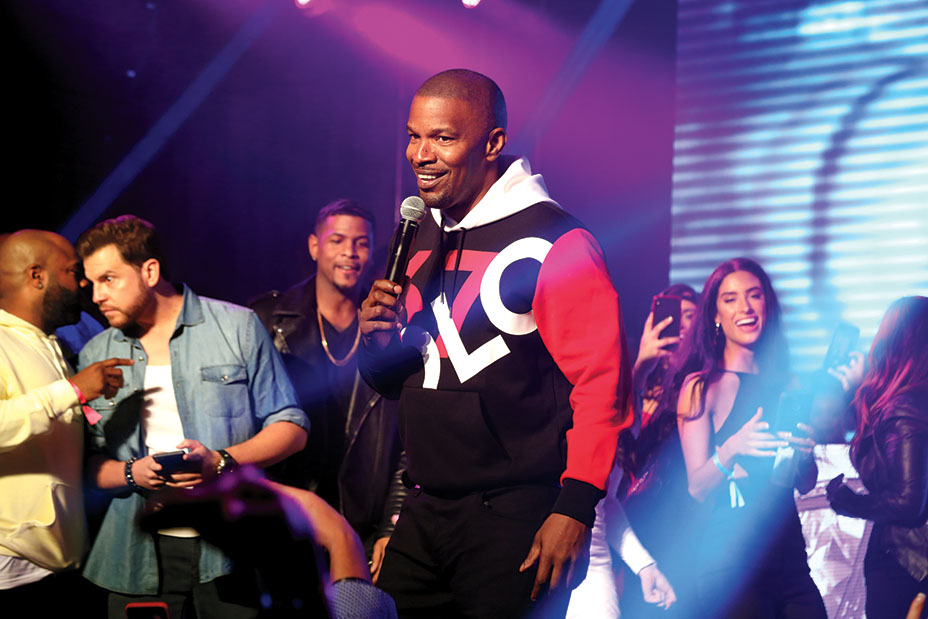 “It was a gut punch of a game,” Burrell told THR as the credits faded to black on a night that saw his team — backed by a passionate contingent of entertainment industry supporters growing year over year since the team’s return to L.A. from St. Louis in 2016 — come up short. “But it was an incredible experience for my brother and me to be at our first Super Bowl with our beloved Rams. We’re a young, bright, likable team — not my brother and I; we’re old, dim and uncharismatic — with a willing owner, a great front office and amazing coaching.”

Also optimistic is Rams superfan and Culver City native Killam, who attended every home game this season and made the rounds in Atlanta, including a stop at the Rolling Stone Live Big Game Bash, as did Burrell. “Of course I wish we won,” Killam said the morning after the madness. “Every fan wants their team to win, but we made it to the Super Bowl. Last year we made it to the playoffs. The year before that … we did less. Seems to me we’re moving in the right direction.”

Two best friends from High School and the ghost of my dead grandfather. #SuperBowl GO @RAMS

On her way out of the city Feb. 4, Kemper told THR, “The people of Atlanta were the warmest, most welcoming hosts on record. Both football teams seemed perfectly nice, too.” But there’s no denying the matchup was dampened not just by its tepid action and viewership, but also by the tense cultural narrative that has hovered over this year’s game as politics, racial tensions and solidarity with Kaepernick all contributed to a wave of boycotts. “I will not be a spectator, viewer or supporter of the Super Bowl today in protest of the NFL’s racist treatment of [Kaepernick] and its ongoing disregard for the health and well-being of all its players,” tweeted Ava DuVernay. “To watch the game is to compromise my beliefs.”

The day before the game, at American Cut Steakhouse for a Women Rising event for his Feb. 8 comedy What Men Want, producer Will Packer said he was “in full support” of Kaepernick and those who declined to watch the game. But as someone who divides his time between Atlanta and L.A., the producer added there are “ancillary benefits” for his city when the NFL comes to town, and he participated in many of those events, including attending the game. 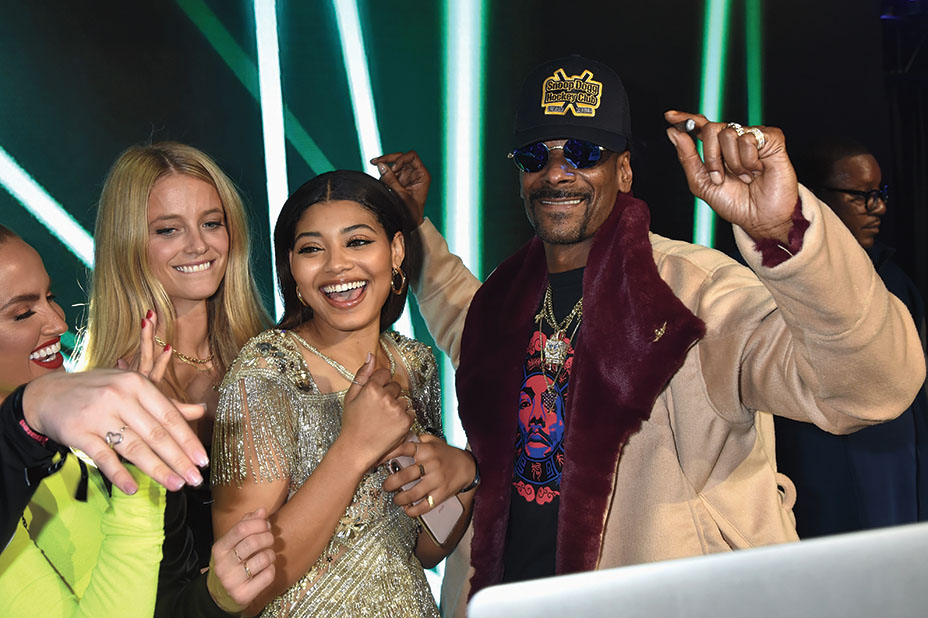 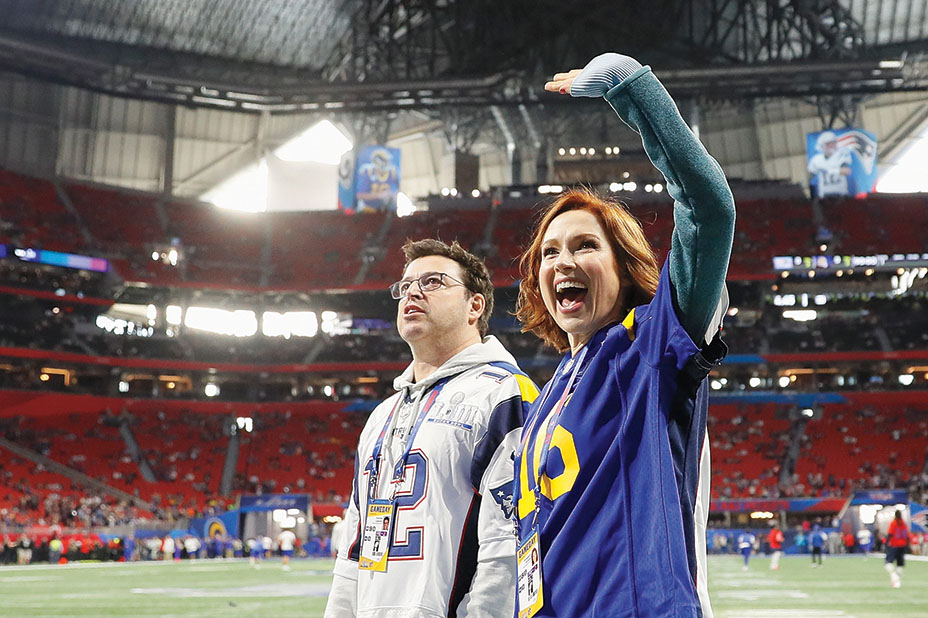 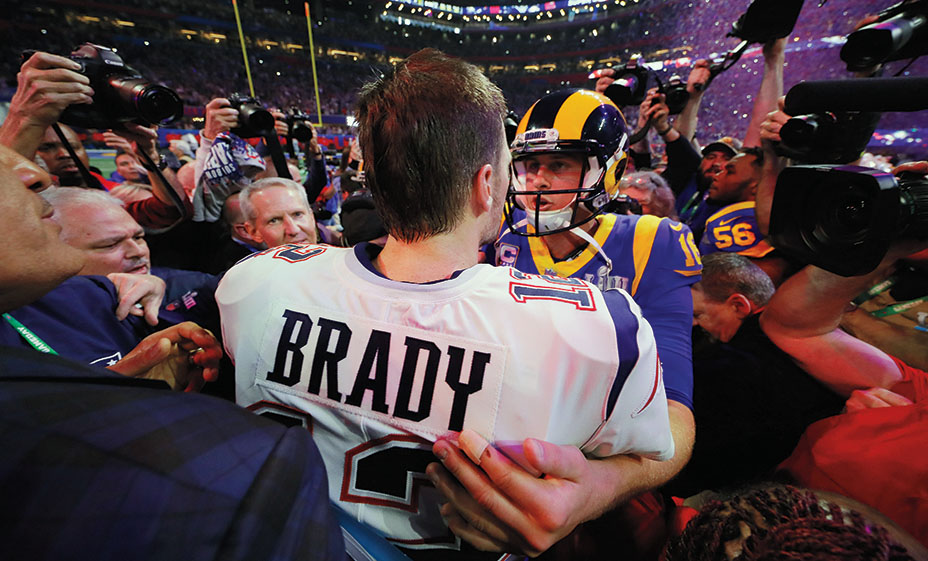 “There are a lot of entrepreneurs — minorities, women, other groups — who benefit from this Super Bowl,” said Packer, who also hosted an event for Atlanta Mayor Keisha Lance Bottoms. “I went to a dinner with the NFL owners here, and the theme of the dinner was all about civil rights and Atlanta being the birthplace of it. John Legend performed, and every owner from the NFL was in one room. At the center of it was how we celebrate civil rights pioneers, what happened and how we continue it today. It’s a complex conversation and all the leagues can do better — the NFL needs to do better.”

The league’s efforts in that direction received a global stage before kickoff when the NFL invited Rep. John Lewis, Ambassador Andrew Young and Bernice King (whose father, Martin Luther King Jr., was born in Atlanta) to appear at the coin toss. The nod to the city’s past capped off a weeklong series of events celebrating Atlanta’s present as the home of hip-hop. Take Super Saturday, for example: Ludacris and Young Thug performed at Rolling Stone‘s party at Goat Farm Art Complex, a rustic converted gin factory where marijuana smoke wafted widely (including in the VIP area). Snoop Dogg took the stage at Sports Illustrated‘s party, followed by Lil Wayne — who at one point paused, removing his sunglasses, to express his awe that Black Eyed Peas stars will.i.am and Taboo were among the audience. And Future and Jamie Foxx (“My last name is Foxx, my first name is Jamie, my middle name is Motherfuckin’,” he declared. “When you see me out, you say there goes Jamie Motherfuckin’ Foxx!”) delivered sets at Maxim‘s party. There were events scattered all over the city, from tony area Buckhead to the arts district in Midtown. DirecTV, though, posted up next to Atlantic Station by constructing a massive temporary structure to host 8,500 fans for a Foo Fighters and Run the Jewels show inside an igloo-type three-story space emcompassing over 72,000 square feet. “This ain’t no halftime shit,” Foo Fighters lead singer Dave Grohl shouted from the stage.

The biggest bash of all had to be the Patriots’ celebration at the Hyatt Regency Atlanta, where fans mobbed barricades into the wee hours postgame, while inside Kraft and company were feted with an all-star celebration that featured performances by the Chainsmokers, Meek Mill and L.A. native Snoop Dogg (who drew the ire of online critics because he also performed at a pre-Super Bowl event in L.A. for the Rams.) Outside, Atlanta police had a heavy presence, lining barricades in and around the hotel with some brandishing automatic weapons. “Tom Brady is amazing,” Packer says. “He has earned the GOAT title.”

Still, Rams fans were not about to throw stones over the big loss. Instead, they’re looking ahead to this fall. “Hard not to be optimistic about the next several years,” Burrell adds. Killam, for one, “slowly recovering” from his team’s loss, was more optimistic than embittered. ” ‘Whose House — Rams House’ is starting to mean something,” he said. “It’s getting louder and louder. So while I wish we had won the Super Bowl, I’m very proud of this team, very proud of my city and only feel optimistic about the future of the Rams franchise. I’ll see you next season, Rammening 2019: The Return of Cooper Kupp.” 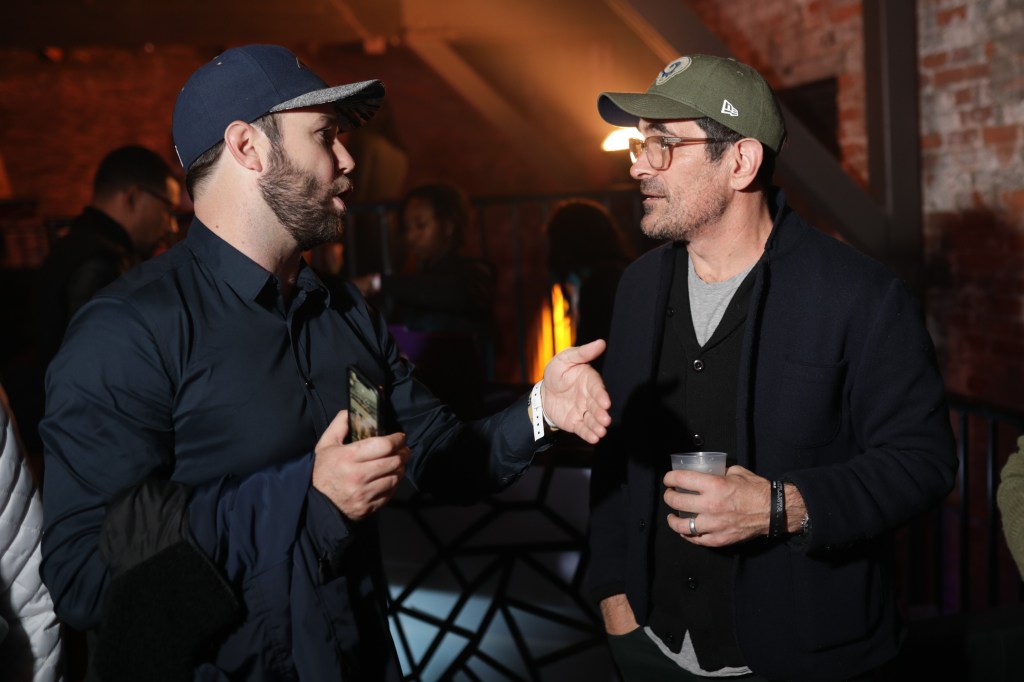 A version of this story first appeared in the Feb. 6 issue of The Hollywood Reporter magazine. To receive the magazine, click here to subscribe.