In 2013, Reprise Theater Company closed its doors after 17 years of producing lesser known and rarely revived musicals. Their final show, a 2011 production of Cabaret under artistic director Jason Alexander, received positive reviews but not enough to shore up a dwindling subscriber list. Two years later, Alexander issued a letter saying the company was ceasing operations due to insufficient funding. Since then, original artistic director Marcia Seligson has been able to resurrect the organization, calling it Reprise 2.0 and making Sweet Charity its inaugural production.

The good news is Reprise is back. The better news is that under the direction of triple Tony-winner Kathleen Marshall (Anything Goes, The Pajama Game, Wonderful Town), Sweet Charity has never looked better.

A love letter from original director-choreographer Bob Fosse to his then-wife Gwen Verdon, Sweet Charity ran for 608 performances after opening in 1966 at Broadway’s Palace Theatre. It garnered nine Tony nominations and Fosse took home the award for best choreography, setting him up for his film debut directing the 1969 movie version that starred Shirley MacLaine.

Based on the 1957 Italian film classic, Federico Fellini’s The Nights of Cabiria, Sweet Charity focuses on New York dancehall hostess Charity Hope Valentine (Laura Bell Bundy), an average girl with an indomitable spirit and insatiable longing to be loved. Dumped by her beau in a Central Park pond and robbed of her purse, she is then wooed and abandoned by Italian movie star Vittorio Vidal (Robert Mammana).

Charity finally meets Mr. Right, Oscar Lindquist (Barrett Foa), a neurotic Upper East Side accountant who professes to love her no matter what, emboldening her to reveal her true occupation. Lindquist claims her unseemly profession in no way alters his feelings for her, but as the wedding day draws near, he isn’t so sure.

It’s a simple story, the bulk of which is placed firmly on the shoulders of Bundy as Charity, a tricky role that could easily become cloying in the wrong hands. Thankfully, Bundy, a Tony nominee for Legally Blonde, has no trouble populating scenic designer Stephen Gifford’s sparse set, hung with billboards doubling as projection screens and featuring a 12-piece band.

Her rendition of “If My Friends Could See Me Now” is a celebratory cri du coeur, combining Marshall’s vaudevillian dance steps with forceful vocalization. She switches easily from exuberance to poignance in such songs as “Where Am I Going,” and gracefully treads the line between sweet and saccharine throughout.

Nervous and steeped in nerdy charm, Foa is likewise endearing as Charity’s sincere suitor, Oscar. Known to TV audiences as Eric Beale on CBS’ NCIS: Los Angeles, he is an alum of the Broadway productions of Avenue Q and The 25th Annual Putnam County Spelling Bee. Portraying opposites, Bundy and Foa share a complementary chemistry that leaves the audience rooting for their union.

On their first date, he takes her to the Rhythm of Life Church under the Manhattan Bridge, where Daddy Brubeck (Terron Brooks) leads the company in the showstopping number that takes its name from that alternative-religion ministry, a rousing melody with hymnal-inspired harmonies and choruses performed to a groovy ’60s tempo.

Jon Jon Briones (Miss Saigon) gives a dynamic turn as Herman, the manager of the Fandango Ballroom where Charity works. He charismatically leads the cast in the show’s climactic number, “I Love to Cry at Weddings,” accompanied by Charity’s sarcastic best friends Helene and Nickie (Krystal Joy Brown and Yvette Gonzalez-Nacer, respectively), who mentor her with a dose of tough love.

The ensemble offers an estrogen-fueled rendition of another of the show’s classic tunes, “Big Spender,” featuring a dead-eyed cynicism that belies Dorothy Fields’ flirtatious lyrics. Marshall takes a page from Fosse here as she does throughout the production, though she avoids directly adapting his steps, subtly making the dance numbers her own. Her staging is as discreet as her work with individual actors, coaxing emotionally intimate moments that are every bit as powerful as the brassiest elements in Cy Coleman’s classic score.

In a town brimming with talent, L.A.’s local theater scene remains paradoxically anemic compared to cities like New York and London. In the wake of the Great Recession, it was no surprise that Reprise closed its doors, one of many companies around the country similarly hit. But with rumors that movie palaces downtown might start hosting touring Broadway productions, now is the perfect time for Reprise 2.0. If the rest of the company’s abbreviated season, including Victor/Victoria and Grand Hotel, is nearly as entertaining as this opener, then charity should be the least of their needs, sweet or otherwise. 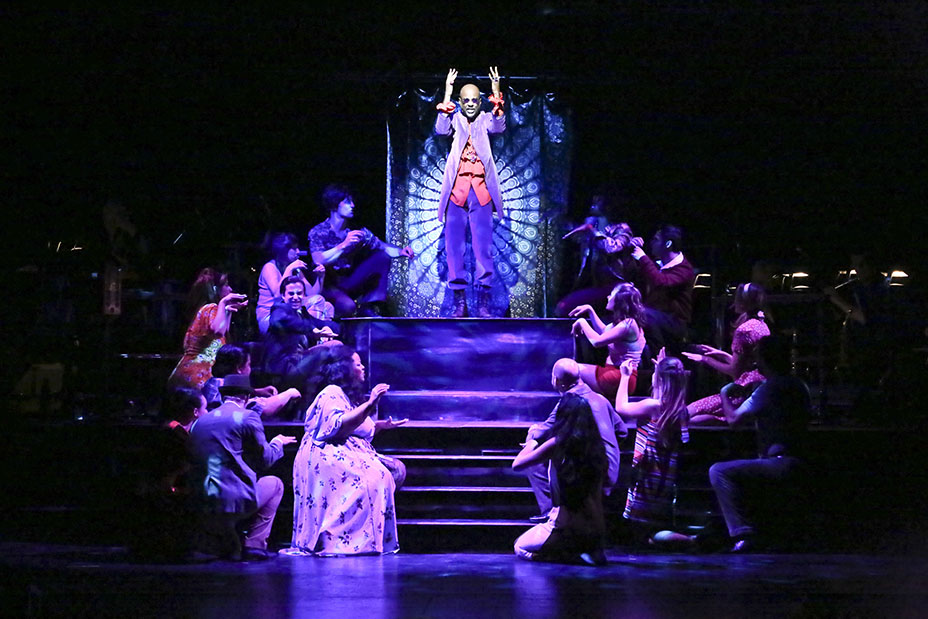