An exhibition of all new work by Japanese artist Takashi Murakami, bowing Feb. 21 with a public opening from 6 p.m. to 8 p.m., will be the toast of the Gagosian’s annual Oscar bash. The show, through April 13, marks Murakami’s first solo exhibition with Gagosian’s gallery on the West Coast.

“This is our Oscar show, which is our biggest show of the year,” says Deborah McLeod, director of the gallery in Beverly Hills, adding that the opening event usually sees more than 1,200 guests. “It’s really a fixture on the calendar, and it’s really glamorous.” The gallery has been debuting major exhibitions during days running up to the Oscars since 1996, when it highlighted work by Francesco Clemente.

The magic formula for the Oscar show is that “it needs to be an important artist, a living artist and always new work,” McLeod explains.The Murakami show will feature 30 works, including paintings of various sizes and two large-scale sculptures. 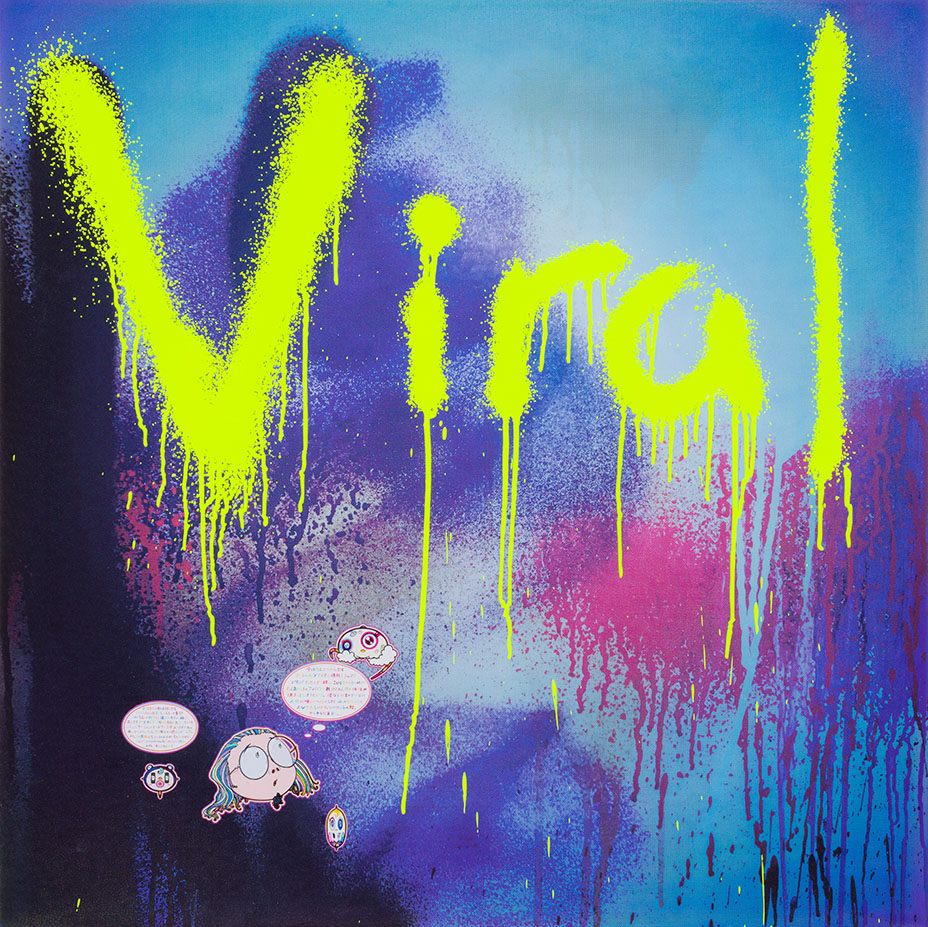 In an interview about the history of the Los Angeles art scene that was published in THR last week, Larry Gagosian explained his thinking behind turning a gallery opening into an Oscar party every year: “It’s kind of an obvious idea,” he said with a laugh. “It’s my specialty: the obvious idea!”

“All these people come to LA from all over the world, not necessarily to attend the Academy Awards — that’s a very small audience — but to be at a party or to be around the buzz,” Gagosian added. “I always regarded the Oscar week as kind of like Christmas for L.A. That’s when LA really distinguishes itself globally in a way no other city can. Why not capture that audience? … Problem is, every artist wants to have the Oscar show and you can only do it once a year.”

The title of the Murakami exhibition is “Gyatei2,” which references the Buddhist mantra, “gyatei, gyatei, haragyatei, harasogyatei” that comes at the end of what is known as the Heart Sutra. “It translates as ‘Gone gone gone beyond, gone completely beyond enlightenment, aha!'” explains McLeod, “It means ‘Go attain enlightenment,’ which I think Takashi is doing.”

“It’s moving to the spiritual plane, but the show is actually quite secular in theme and it prompts one to think about how the secular and the religious collide,” McLeod adds, noting that the new work also draws on Murakami’s personal and professional biography, including childhood memories, his “incredible virtuosity with traditional Japanese painting” (he earned a doctorate in the subject) and his experimentation with the flat animation that brought him worldwide fame. “You will see his arsenal of images as well as techniques,” she says.

The artist will do a talk at LACMA on Feb. 20 about his career and his new work.

“L.A. has been very important to me as an artist,” Murakami tells THR via email (translated from Japanese), adding that he’s “especially grateful for my relationship with MOCA, because it built the foundation for my career that has led up to the present,” and is how “I became known in the American art scene.” He singles out particularly the L.A. museum’s 2001 mounting of “Superflat,” a group exhibition he curated featuring artists (including himself) who’d metabolized various aspects of Japanese visual culture, from woodblock prints of the Edo period to anime to cuteness and pop culture. MOCA also mounted the 2007 retrospective “©Murakami,” which controversially featured a Louis Vuitton store within the museum exhibition and for which Kanye West performed at the opening.

“It became a harbinger of organizing major art parties, and I was thought of as an art world innovator at the time,” the artist recalls. “As I look back, which I do often, I do think it was only possible at MOCA.”  Murakami has since collaborated with Virgil Abloh — the DJ and music producer who became Louis Vuitton’s artistic director of menswear in March — on three exhibitions in different cities, including “America Too” at Gagosian Beverly Hills in October.

For those who follow Murakami on social media, where he has more than a million followers on Instagram alone, he notes: “I often make trifling posts on social media, and for this exhibition I have incorporated such rambling texts into the surface of my paintings, creating works that may serve as a time machine in a sense, carrying messages for future audiences.”

The painting was completed in the last few weeks, Murakami reveals, but its origin story dates back to 2006. “When I first met Larry Gagosian at his uptown gallery in New York to discuss my getting represented by the gallery, I tried to promote myself by showing him an idea for this painting,” Murakami writes. “Larry really liked the idea. I subsequently did come to be represented by Gagosian, but I wasn’t able to realize the fish painting for a long time.”

Murakami describes experimenting with fish motifs and imagery from traditional ceramics, but still struggling to achieve the work. “[It] took me a long time to digest it in my own way,” he says. “The original imagery was so magnificent that it intimidated me; I couldn’t fully pull it into my own motif.”

He compares his process to that of an actor’s: “I imagine this process to be something similar to how an actor might throw themselves into creating a historical role by gaining or losing weight and getting mentally ground down,” he says. “But, in any case, I’m not adept at such a process and it took me over a decade to realize this painting.”