Along with their fashion-fine art mashup work, Abloh and Murakami also have something else in common: a relationship with Kanye West. Abloh previously worked with the rapper on his Yeezy line and Murakami has designed album covers for him, including 2007’s Graduation and his June join album with Kid Cudi, Kids See Ghosts. Ahead of their Beverly Hills debut, the collaborators answered a few questions by email (their comments are lightly edited and condensed here) about their process and their plans.

How long have you been working together? Who brought you together?

Takashi Murakami: I first met Virgil during my collaboration with Kanye West, then we were reintroduced to one another at my exhibition at the MCA Chicago. We then did a T-shirt collaboration and a talk show together at ComplexCon in 2017 and hit it off.

Will the Beverly Hills show include pieces from both “Future History” and “Technicolor 2”? Will new pieces be added?

Murakami: There are new works galore.

Virgil Abloh: The Gagosian Beverly Hills show will feature some works from past exhibitions but also some new major works which completely show the reach of the concept of our collaboration.

Talk about your process. Do you discuss and execute simultaneously? Or does one contribute, then the other follows with or without consulting the other?

Murakami: Both he and I, as well as our assistants, never let go of our smartphones for a moment. And whenever either of us thinks of something, we share our ideas in that moment and discuss them in images, videos and words. When we both sense a positive move, we proceed with the production of the work.

Abloh: Our process is a true collaboration — each of us generate, lead and execute various ideas.

What has each of you learned from the other? What do you take away from this collaboration?

Murakami: Virgil transformed fashion, which was literally a trend, into a conceptual game of ideas. Thanks to him and the context he has built, my perception of the fashion scene has greatly expanded. At first glance, his first Louis Vuitton runway show was an accessible homage to high fashion and street fashion of the past 20 years, but at the same time it represented a strategic move toward a complete transformation of fashion; whereas it used to be about appearance, texture and wearability, he has made it conceptual.

Over the course of working together, how has the collaboration evolved?

Abloh: We have in the later part of the collaboration become more ambitious, and it is reflected in the medium and scale of the works.

Takashi, you’ve been called the Andy Warhol of Japan.

Murakami: The concept of Pop Art to which Warhol belongs emerged before America lost the Vietnam War, and had at its basis the confidence of an undefeated America flush with money. The era Warhol lived in is Pop, and he’s the icon of Pop Art. I, on the other hand, am Japanese, and I debuted as an artist when Japan’s bubble economy had burst, during the economic depression. I touted the concept of Superflat emerging from the era of want, with no confidence or funds. So it’s quite misleading to draw a comparison between Warhol, the founder of popping-up, booming art, and myself, but I shrug it off — if people want to say we are similar, so be it.

Virgil, what can we expect from your 2019 show at the Museum of Contemporary Art Chicago? It’s a museum takeover in your native city.

Abloh: My MCA show will exhibit all facets and mediums of my art practice. It challenges convention whilst representing my full body of work from fine art to my contemporary practices in architecture, fashion and design. I sense the world is ever-evolving but particularly now there is a wealth of topics to create art from.

What do you make of Kanye West’s comments regarding President Donald Trump?

Murakami: Kanye is keeping his raison d’etre as an artist by constantly throwing people off with incendiary comments and upsetting his distance with the society. I feel that those who criticize or hate him based on a serious political context have a limited, narrow outlook on things. 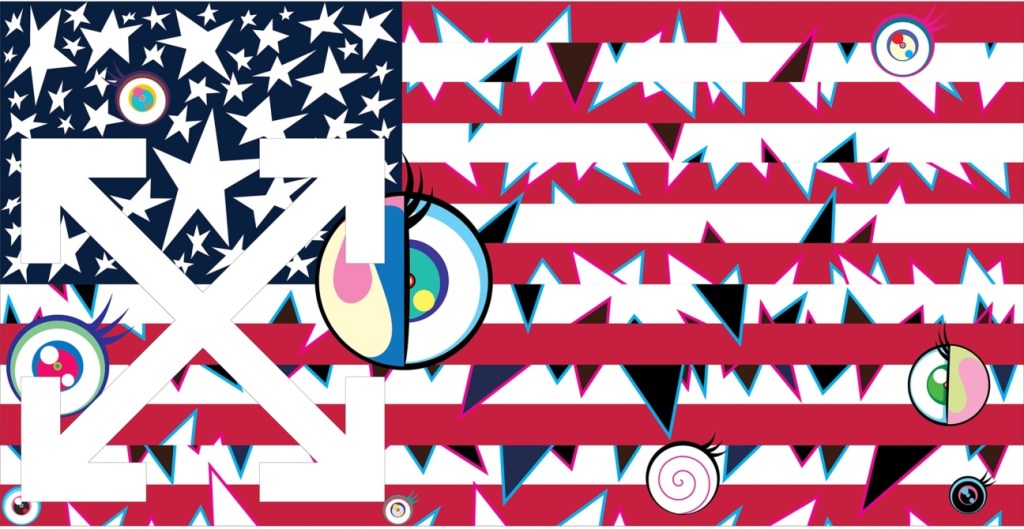 A version of this story appears in the Oct. 3 issue of The Hollywood Reporter magazine. To receive the magazine, click here to subscribe.