Continue to The Hollywood Reporter SKIP AD
You will be redirected back to your article in seconds
Skip to main content
February 22, 2019 12:52pm

So many plays in the U.K. are being viewed through the prism of Brexit at the moment, some fittingly, others spuriously. Few have been consciously adapted with such a skilful awareness of the current mood as this exuberant, uproarious, fully ventilated new version of Tartuffe.

Indeed, the “new version” tag is entirely apt on this occasion, given the vigor with which John Donnelly has approached Molière’s enduring satire of religious hypocrisy. While the production is recognizably Tartuffe in all its plot and character developments, Donnelly has done away with the original’s rhyming verse (with a few ironic exceptions), persuasively relocated the action to contemporary London and, most notably, recalibrated the work in order to underline the fact that Tartuffe is the least of the hypocrites on show.

The production is directed with both subtlety and great verve by Blanche McIntyre — who makes hay with the play’s farcical possibilities — and flown through its paces by an excellent cast, led by Denis O’Hare’s highly original, risky, ultimately rewarding Tartuffe. This is very probably the funniest play in London, and one which may make many in the auditorium sit just a little uneasily in their seats.

The opening gives notice of the fun that McIntyre and her team intend to have. With audience members still arriving, O’Hare walks amongst them, offering daffodils; when he starts beating his chest, an usher leads him away by the arm. Just then a bacchanalian party bursts into life behind the giant French windows that act as the stage curtain, and a naked man runs into view.

The windows disappear to reveal the affluent north London mansion of Orgon (Kevin Doyle), a well-to-do Lord of the newly minted variety; while the services he has rendered to government will remain unclear, they have allowed for some highly suspect benefits to his own bank account. Orgon’s malfeasance weighs heavily upon him, as does the fact that he presides over a family too accustomed to privilege.

“He has made many regrettable decisions, some of them in this room,” barks his high-minded mother Pernelle (Susan Engel) to the clan, who are still recovering from their party hangovers, a gilded copy of Michelangelo’s David looming over them, draped with a feather boa. 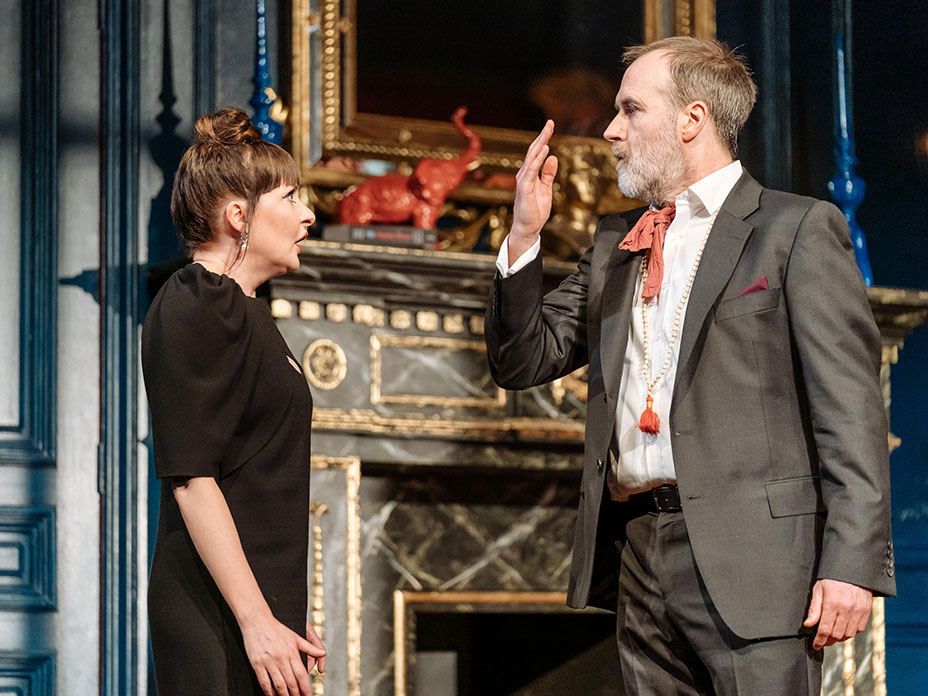 Pernelle’s scolding of her family as self-satisfied and detached is on the money. Siblings Mariane (Kitty Archer) and Damis (Enyi Okoronkwo) are pampered idiots; Orgon’s second wife Elmire (Olivia Williams) is not above extra-marital adventures; and his brother-in-law Cleante (Hari Dhillon) is one of those business people who finds social acceptance on the boards of arts institutions and charities — and are well very paid for it. They’re not unlikable, but as they line up sanctimoniously against Orgon’s new friend, it’s far harder to take sides.

In a masterful monologue, Doyle paints Orgon’s crisis of conscience as sincerely felt, even moving, as he relates his discovery of the poverty and homelessness just a stone’s throw from his ill-gotten mansion. Yet this lord is no innocent, as quickly evidenced by the hint of his sexual predation upon the housekeeper Dorine (Kathy Kiera Clarke) and the cruel folly of his plan to exorcize his guilt, precipitating the familiar plot dynamics as the family attempts to save Mariane from marriage to Tartuffe.

This more nuanced characterization extends to the supposed villain of the piece. Rather than the familiar Christian fanatic who doesn’t practice what he preaches, O’Hare’s Tartuffe is a glorious jumble of religions, New Age mysticism and bespoke gobbledygook — something for everyone — who first walks in wearing a beach shirt, beads and polka dot shorts and speaks with a Euro-pudding accent trapped somewhere between the Mediterranean and the Balkans.

Instead of targeting Orgon in church (Molière’s device), this Tartuffe has been found, destitute, on a housing estate. There’s a touch of Boudu in this stranger’s improvising hold on the household he enters. He’s more chancer than schemer, no more a fraud than the smoothly rational Cleante or Mariane’s “street poet” boyfriend Valere (Geoffrey Lumb), whose revolutionary socialist veneer crumbles when he learns she’ll lose the inheritance if she defies her father. 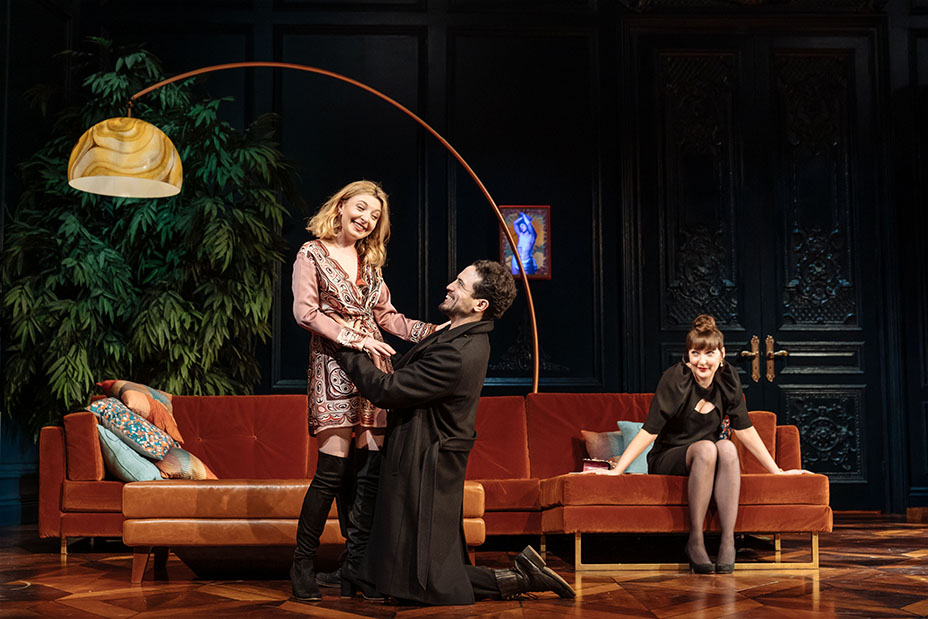 O’Hare’s chewy diction and array of chants and ritualistic tics may take a while to get used to, but he’s also compellingly entertaining, and behind the mannerisms lurks the sense of a man with more self-knowledge, possibly even decency, than those around him.

The comedy combines terrific badinage (including the romantic tussle between Mariane and Valere, the latter having his meta moment as he declares that “rhyme is a bourgeois construct,” before unleashing some spectacularly bad verse) and high-grade farce, whether it’s characters leaping implausibly from the furniture, Elmire’s attempted entrapment of Tartuffe (Williams and O’Hare excelling) or O’Hare’s endlessly physical performance, as his character constantly struggles to look cool.

Beneath it all, Donnelly weaves many of the conflicting tensions that comprise today’s political and social debate. When Orgon pines for things to be as they were in his childhood, he’s mimicking the meaningless and racist mantra of those who wish the U.K. to leave Europe; some in the Brexit-beleaguered audience may share his desire for “clarity,” but not his willingness to bow to an altar of blind faith, which is all that Tartuffe — and the current British government — can offer.

And however inauthentic Tartuffe may be, this self-designated “outsider” is undeserving of the contempt in which he’s held, with even the well-meaning Dorine referring to him as an “edible fungal growth.”  As ever, Tartuffe finds the Establishment joining ranks against him. But this time he does have the last word.