Chita Rivera got up from her chair, walked across the stage and mime-slapped Renee Elise Goldsberry across the cheek. The actors were sitting on a panel of leading ladies at Women’s Day on Broadway, a celebration of stories by, for and about women at the St. James Theatre in New York City on Monday afternoon.

Goldsberry had just referred to herself onstage as an “older woman” and revealed her age, 47. The legendary Rivera, who’s a few decades her senior, had had it.

“Shut up. Shut up,” she said, as the packed house erupted in applause. “Don’t make me say how old I am.”

While the play-fighting might seem to have been counterintuitive to the event’s ethos, the rapport was full of love and encouragement. Goldsberry had brought up her age because she’s playing a superhero on the Netflix science-fiction series Altered Carbon. While she always wanted to play a superhero, she never thought it would come when she was well into her 40s.

“In period pieces, we are showing women that have to be strong because they’re in a time when women are not treated a certain way,” Goldsberry told The Hollywood Reporter of her work in Hamilton and The Immortal Life of Henrietta Lacks. “But in my Altered Carbon reality, you can choose your own body; that’s the premise of the show. So this soul, free of gender and race and all of those things, decided it is upon her to save the world, and she chooses to be a woman of color to do it. So it flips the paradigm of what it means to be a woman and be powerful. That feels right for right now.”

That’s also part of the reason Disney chose to host this first-ever Women’s Day, partnering with The Actors Fund on the event. The one-day symposium comprised four panels with the movers and shakers of Broadway, including writers like Tina Fey, whose musical, Mean Girls, starts previews this week; Kristen Anderson-Lopez, two-time Oscar winner and one of the writers of Frozen, the stage adaptation of which is in previews at the St. James; producers like Daryl Roth and Sonia Friedman; and directors like Diane Paulus, Tina Landau and Julie Taymor.

According to an informal survey of the creative positions on Broadway this season — writers, directors, choreographers, etc. — just 17 percent of those were occupied by women. 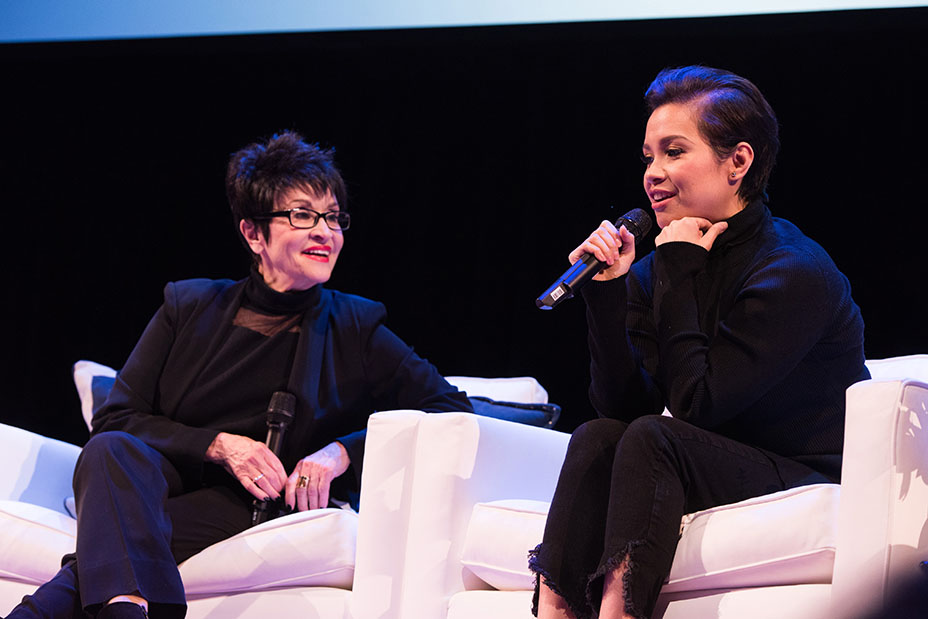 “So many things are so female-centric, I just thought the numbers were higher,” Gayle King told The Hollywood Reporter. “When you really delve into it, boy they’ve got a lot of work to do.”

King moderated the first panel on “marquee women,” and the panelists spoke about perceptions of women in power and how to rise to the occasion during the time of #MeToo. They also spoke about the B-word and how strong and powerful women in male-dominated environments often get called names. Landau, who directed this season’s well-received new musical SpongeBob SquarePants, said she’s had much more success being a listener, to which Fey nodded in agreement.

“I’m not a yeller. I physically don’t have the capability for it,” said Fey. “I also think that once you’re a little bit down the road in your career, sometimes people might expect you’re going to be a bitch and they come in a little bit scared, and you can ride that.”

King also asked about the #MeToo movement, mentioning that she has male friends and colleagues who have expressed their concern about how to interact with female colleagues.

“Oh, that must be so hard for them,” joked Fey, adding that this “reckoning” has helped dispel the myth that overvalued men are essential to their positions, opening up some of those same-level leadership positions for women. “I just feel like everything is like a football fumble, and everyone is like, ‘Go long! Take all these jobs while you can.'”

In the second panel, moderator Whoopi Goldberg brought up the idea that there should be an Emily’s List-type organization for female writers, where a group of wealthy women put together a fund to finance opportunities for up-and-comers. 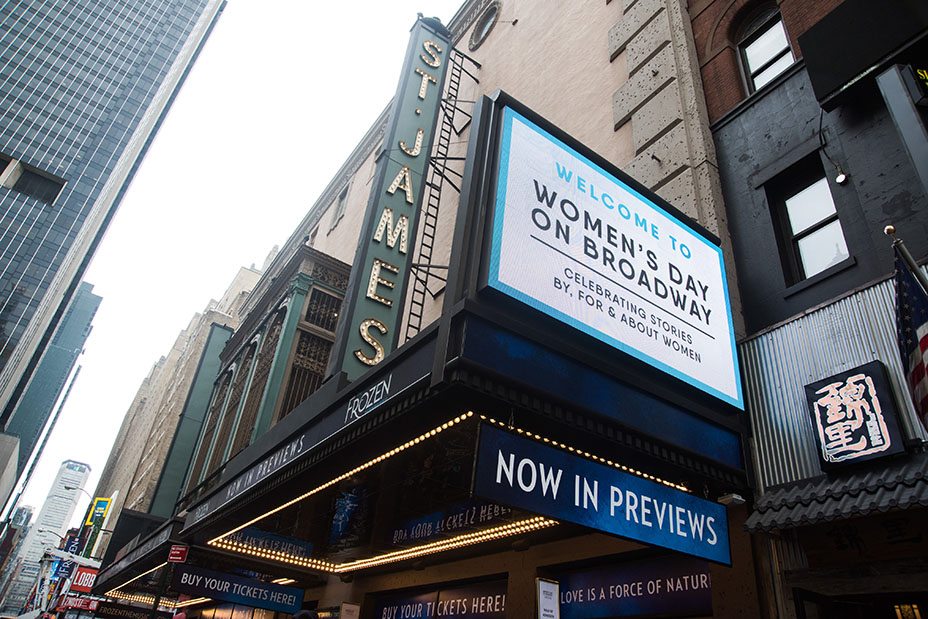 The panel of actors spoke about the importance of representation onstage, and knowing and harnessing your talents and abilities when auditioning for roles.

“I want all the young kids to be very proud of who they are, their culture, their history, and then we learn from each other,” said Rivera, who made her Broadway debut in the original 1950 production of Guys and Dolls. “We bring to the table who we are and our whole history and culture. I think that’s vital.”

On the next panel, featuring women behind the scenes, Pulitzer Prize-winning playwright Marsha Norman spoke to Goldberg’s point about creating a fund for women writers. While something of that specific nature doesn’t yet exist, Norman mentioned the Lilly Awards, an organization that celebrates women in theater; the Kilroys, a group that puts together a list of underproduced plays by female-identified writers; and the Susan Smith Blackburn Prize, which honors an English-language play by a woman each year. (The 2018 winner, Brit playwright Alice Birch’s Anatomy of a Suicide, was announced Monday.)

“It is crucial that we hear the stories of women,” Norman said. “If a theater is just doing plays by men, it is like the history is going to just be about the daytime. We are going to miss half of what has happened by only supporting the work of men.”

Director-choreographer Baayork Lee, who was in the original cast of The King and I and A Chorus Line, spoke to the importance of seeing yourself represented onstage. “Cinderella had blond hair and I wanted to be Cinderella,” she said. “It’s really important for kids to see themselves reflected, who they are. It also helps them to say, ‘I can be there, I can do that.'”

Each panel touched on the practical needs of women working, particularly from a perspective of child care. Frozen’s Anderson-Lopez spoke to this reality for herself. When the new Disney musical premiered in Denver last year and she and her family had to travel for the production, she applauded the show’s co-producer Anne Quart, who also has young children, for being a vital resource. 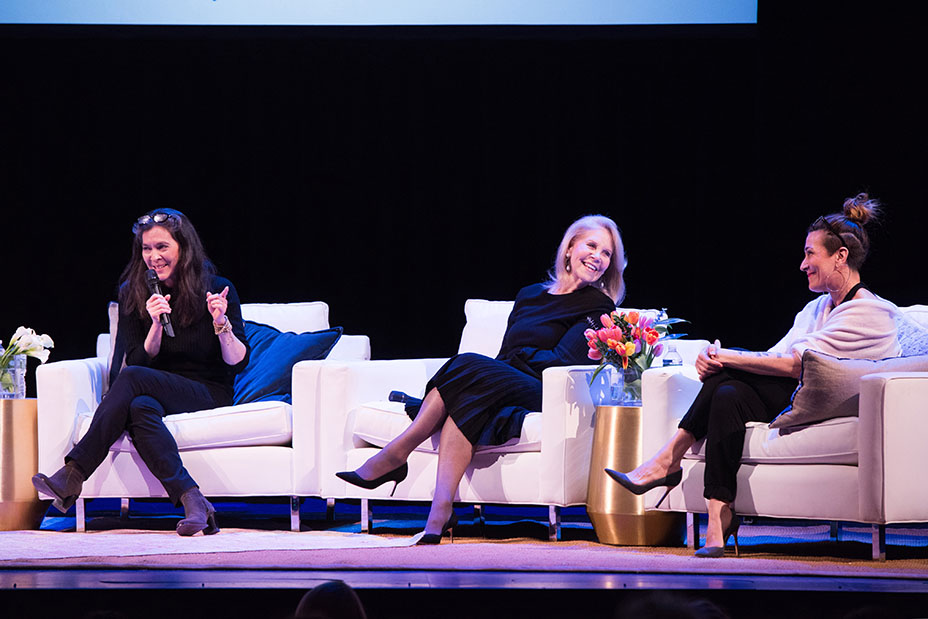 “There was a mother dealing with the same problems that I was dealing with: How do I handle my family and be the best artist that I can be?” Anderson-Lopez told The Hollywood Reporter. “You cannot be that unless your family is well taken care of, unless you have a place to live, unless you have a babysitter that you trust. To know that I had someone who had that experience and that perspective was invaluable.”

Roth, who started her producing career in her 40s after she had raised her family, talked about the importance of depending on her own strength because many people wrote off her ambitions as a hobby.

“There are some people that may not believe in you or may not believe you can do what you set out to do,” she said. “I didn’t have mentors or people who were all that encouraging to be honest, but it had a great effect on me because I learned that I really had to depend on myself.”

Tesori echoed the pleas from Goldberg and Norman for financial support for women in the industry, adding that the career backing needs to go beyond money. “We have to tag young women, we have to make sure that we don’t keep them in the hamster wheel of apprenticeship or assistantship,” Tesori said.

Taymor, who directed the highest-grossing stage property of all time, Disney’s The Lion King, ended the event with a short talk. She walked out onto the stage on crutches, sat down and spoke directly to the audience about the importance of perspective.

“Failure can also be the most important thing in your life,” she said, perhaps referencing her bruising experience on the troubled production of Spider-Man: Turn Off the Dark. “Whether it’s a failure on one hand, it’s a success on the other hand. Women don’t often get the second opportunity. I think we have to see this as something that’s very important. The scars of those experiences give you strength.”