You’ll find Sony Pictures Classics’ co-president Tom Bernard sipping V8 and tucking into his eggs over easy at Kos (61 Bellevue Ave.) after his usual Monday morning fest ice hockey game. “There is a lot of power at the breakfast afterward,” he says. Mister Smith Entertainment CEO David Garrett (at TIFF with Max Minghella’s Teen Spirit and doc The Elephant Queen) likes to ease into his day at The Ritz-Carlton (181 Wellington St. W). He favors “the bar at the back” — the DEQ Terrace and Lounge. “The morning hours are fantastic for quieter meetings,” he notes. “Air conditioning can be rather zealous, so bring arctic clothing and order a large pot of green tea.”

IFC Films’ Arianna Bocco admits she’s “sort of old school — I haven’t really adopted a lot of the new spots.” Her standards: Yuzu No Hana (236 Adelaide St. W) or RaviSoups (322 Adelaide St. W) “for a quiet meeting/lunch or to read or catch up on emails between screenings.” She also recommends La Bettola di Terroni (106 Victoria St.) “for a quick bite before or after screenings,” and Terroni (57 Adelaide St. E) for an “industry crowd.” 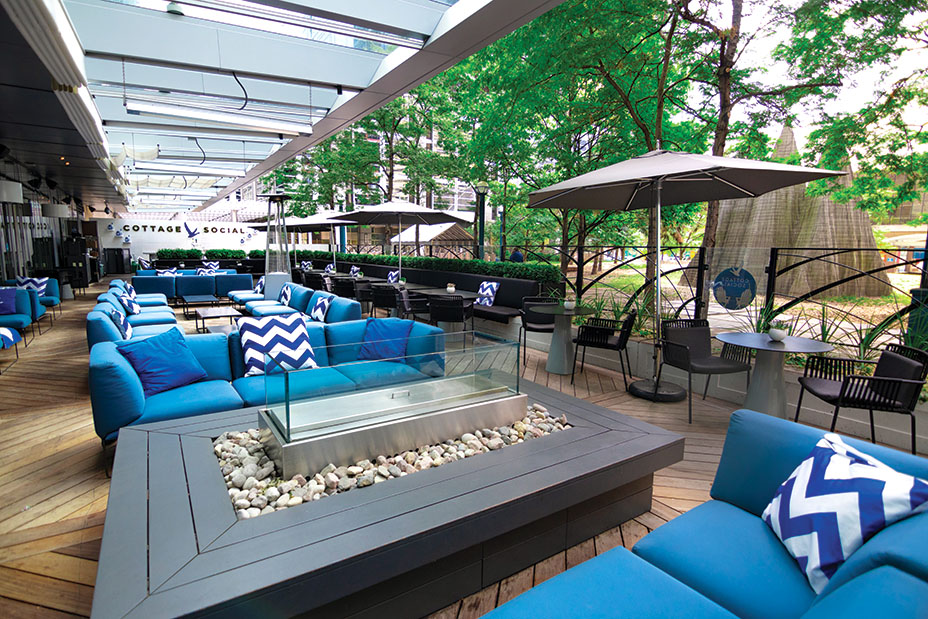 “Momofuku (190 University Ave.) is always the first spot I hit whenever I get to Toronto,” says Slate PR partner and Toronto native Simon Halls, who will be at TIFF supporting clients including Annette Bening (Life Itself) and his husband, Matt Bomer, who has two films at the fest (Papi Chulo, Viper Club). “We had a special pre-screening dinner there for Tom Ford’s last movie, Nocturnal Animals, and it was fantastic.”

For HanWay Films managing director Gabrielle Stewart (at TIFF with five films, including The Hummingbird Project), top places for sealing deals include the hotel lobbies at Le Germain (30 Mercer St.) and the SoHo Metropolitan (318 Wellington St. W). Bocco admits Toronto dealmaking can be very unglamorous: “Usually I am closing a deal somewhere on the street in a doorway so no one can hear me.”

AND IF YOU WANT TO GET AWAY FROM THE FEST…
Baseball, books and the blues — for places to unwind between screenings and deals.
By Christos Tsirbas

The Blue Jays host Cleveland Sept. 6 to 9. You could catch the game at the Rogers Centre or crash it from the SportsNet Grill at the Marriott City Centre Hotel, which overlooks the field and serves up tasty pub fare. Get into the spirit with a Coney Island chili dog ($17). You also can book a field-view hotel room and enjoy the game from the comfort of your bed.

Take in the Music Scene

The Rex Jazz and Blues Bar (192 Queen St. W) is the beacon of jazz in Toronto. Harry Connick Jr. and Wynton Marsalis have graced the stage of this 70-year-old, family-run institution, which offers pub grub and craft beer. Live acts play every night, and there’s no cover on weeknights. Saxophonist Tim Ries, a Rolling Stones collaborator, will perform Sept. 6.

Don’t show up at The Monkey’s Paw (1267 Bloor St. W) with a wish list. The shop is home to the Bibliomat, a randomizing vending machine that dispenses old books at two bucks a pop. This antiquarian bookstore caters to the weird, the wonderful and the unexpected. Guillermo del Toro has furnished his library with many macabre tomes from here.

Rejuvenate at the Hammam Spa

Enjoy the signature Turkish Bath ($155) at the coed Hammam Spa (602 King St. W). This 60-minute treatment includes a full-body exfoliation so you can look and feel your best at the afterparty. Booking online or contacting the spa by email is best, says director of sales and operations Victoria Mierzwa.