If you aim to embody the indomitable spirit of a beloved subject named not once but twice in the title of her celebratory bio-musical, you better be up to the challenge. Adrienne Warren has what it takes, and then some — the powerhouse voice, the jackhammer legs, the wild dance moves, and above all, the heart — to carry Tina: The Tina Turner Musical across the rough patches of its clunky book and uneven direction. This grit-and-glitter production is neither the best nor the worst (RIP, Donna Summer) of the ongoing wave of musical biographies, but the sensational lead performance that drives pretty much every scene is not to be missed.

Warren originated the role in London, where the show has been a sizeable hit. Having her accompany it across the Atlantic was a no-brainer, even if the superhuman stamina required for six performances a week (Nkeki Obi-Melekwe plays Turner at matinees) must be exhausting. The 32-year-old actress first popped on Broadway in 2012’s Bring It On and then scored a well-earned Tony nomination, stealing scenes away from the almighty Audra McDonald, no less, in 2016’s Shuffle Along. Tina gives Warren her star-is-born showcase. She honors the defining moments of a genre-hopping musical career and elevates her material in pedestrian dramatic scenes. What’s more, she’s entirely believable in a part that tracks Turner from her teens to around age 50.

The show was developed by Dutch company Stage Entertainment, with an early draft of the book by the writing team of Frank Ketelaar and Kees Prins. Katori Hall, an African American playwright who hails from Tennessee, like Turner, and is best known for her Martin Luther King drama, The Mountaintop, was brought in to overhaul the material and now gets chief credit.

The contours of the story — with early fame overshadowed by a hellish marriage scarred by domestic violence and serial philandering, followed by a triumphant re-emergence as a solo artist who trashed the standard thinking about women aging out of pop careers — have been covered in Turner’s best-selling autobiography I, Tina, and in the film adaptation, What’s Love Got to Do With It. That 1993 feature starred Angela Bassett as Tina and Laurence Fishburne as Ike Turner, the louse of a husband who launched her career at age 18. But the framing device set up in the opening minutes lets you know instantly this is going to be a bumpy dramaturgical ride. 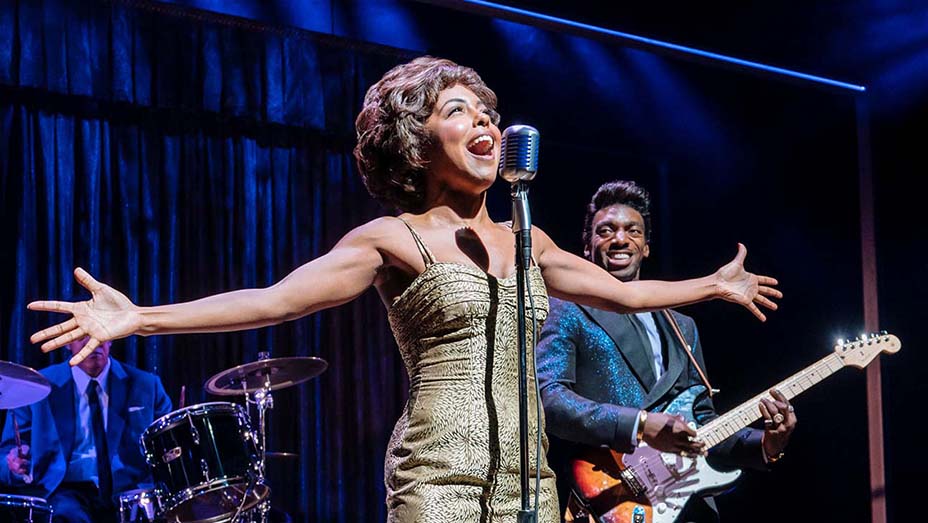 In a moment that induces a shiver of excitement quickly followed by a giggly cringe, Warren’s Tina is first glimpsed with her back to the audience facing a golden staircase, wearing the red leather mini-dress and the “Lion King” mane that became Turner’s signature look in the ’80s. The pulsating opening bars of “Simply the Best” then give way to Tina repeating the Buddhist chant of determination, overlapping with the Native American invocation of her Gran Georgeanna (Myra Lucretia Taylor), who is indicated to be part Cherokee. The bid to marry success and self-actualization with spirituality is nothing if not ambitious, though tonal oneness proves elusive.

The musical finds steadier ground once the scene rewinds to a small-town Tennessee church in 1950, where the young Anna Mae Bullock (delightful force of nature Skye Dakota Turner, no relation) puts the choir in the shade with her roof-raising input on an inspired gospel reworking of “Nutbush City Limits.” Her emotionally withholding mother Zelma (Dawnn Lewis) scolds her for being “too loud” and walks out shortly after on her slap-happy husband (David Jennings), leaving Anna Mae behind.

Cut to Anna Mae at 16 (Warren), as her nurturing grandmother urges her to go north to join her mother and big sister Alline (Mars Rucker) in St. Louis, where she can tend to the gift inside her — her voice. A night on the town with Alline and her girlfriends — energized by Anthony Van Laast’s rambunctious “Shake a Tailfeather” choreography — leads to slick Kings of Rhythm frontman Ike Turner (Daniel J. Watts) plucking Anna Mae out of the audience to sing “She Made My Blood Run Cold.” Her leather-lunged vocals wow him enough to offer her a featured spot on his tour, and while Zelma still shows scant affection for Anna Mae, she extracts a promise from Ike that he’ll treat her daughter right.

Ike’s idea of that is to rule over Anna Mae and his backup singer-dancers, The Ikettes, like a hard-ass drill sergeant; he also insists on a name change as she proves a natural for the spotlight and the act becomes The Ike and Tina Turner Revue. His domineering extends to ending her relationship with sweet-natured bandmember Raymond (Gerald Caesar). That romance yields one of the more clumsily inserted musical numbers — the Al Green song “Let’s Stay Together,” which became a comeback hit for Turner in her 1983 cover.

An Inside Look at the 430 Iconic Fashion Ensembles, 180 Wigs Created for 'Tina' the Broadway Musical

Ike also decides they should marry, more for business purposes than for love, and while Tina/Anna Mae warns him, “Better Be Good to Me,” she still hasn’t quite found the inner strength to stand up to the bullying pig, dubbed “the devil” by the Ikettes. Not that marriage diminishes cokehead Ike’s appetite for sex with a string of other women, or his habit of silencing Tina when she voices her own opinion. Additional conflict comes in scenes of ugly racism while touring in the South.

This section delivers some of the most electrifying songs, which generally work best in performance or recording-studio context. Those include “I Want to Take You Higher,” with Warren and the Ikettes (Holli’ Conway, Kayla Davion, Destinee Rea and Rucker) unleashing their sizzling dance routines; “River Deep — Mountain High,” overseen by producer Phil Spector (Steven Booth), whose dismissal of Ike feeds his paranoid resentment; and “Proud Mary,” on which Tina rocks the iconic gold shimmy dress as she erupts from the smooth opening into the raw accelerated section, quaking like a woman possessed. (Only designer Mark Thompson knows what’s with the snaky coils on the Ikettes’ dresses here, though, which look like the work of H.R. Giger.)

It’s thrilling stuff, and a credit to the creative team that we get entire songs, or close enough to them to be satisfying, unlike the all-too-common jukebox-musical preference for choppy fragments. And Van Laast’s take on the women’s furious go-go moves deftly builds a bridge between the unrestrained style of the original untrained dancers and the more disciplined athleticism of contemporary Broadway pros.

Even if Hall and director Phyllida Lloyd can’t quite finesse the lurching shift from Ike smacking around Tina and taking a belt to their son to pleading forgiveness in “Be Tender With Me Baby” — textbook erratic domestic abuser behavior, of course, but awkwardly handled, and not helped by Watts wearing what looks like Sonny Bono’s old hair — the first act steadily ratchets up our emotional investment in Tina’s liberation. That finally happens after an especially brutal altercation, tapping into feminist survival ethos as the bloodied but unbroken Tina hits back and breaks free, singing “I Don’t Wanna Fight.” 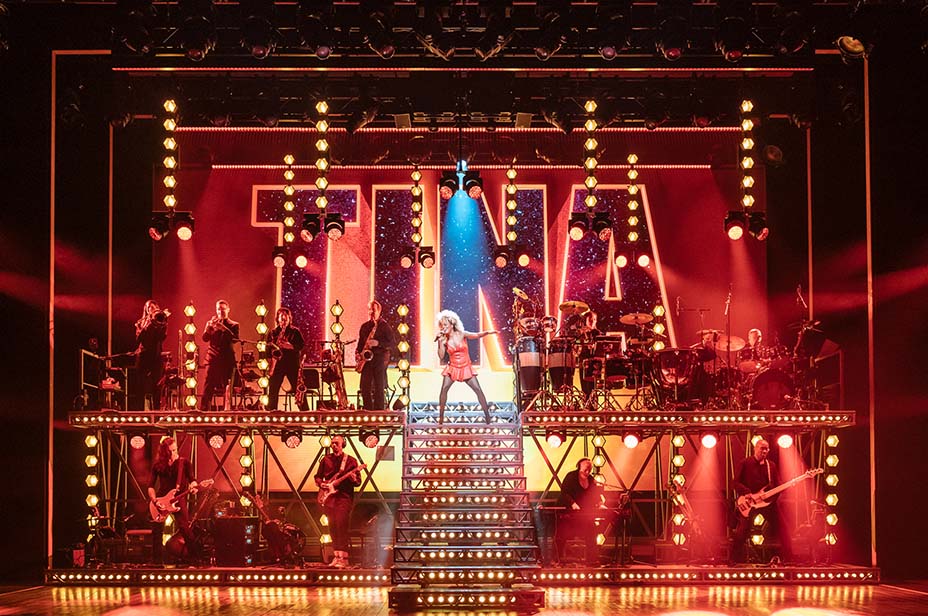 As a narrative, the second act doesn’t have the sturdy structural bones of Tina’s early years. That’s apparent from its uncertain beginning with the low-energy opener of “Private Dancer,” sung while she’s toiling thanklessly in Las Vegas and staged like a bad ’80s music video. Lloyd is renowned for her bold classical theater work, but her journeyman direction of musicals — exemplified by the critic-proof juggernaut Mamma Mia! — does little to inject consistent momentum into the exile-through-comeback years.

With Watts’ dangerously charismatic Ike mostly out of the picture, that leaves only sketchily developed characters to interact with Tina. Those include Rhonda (Jessica Rush), whose interview for the road manager job requires sex with Ike but she sticks around long enough to become a loyal friend to Tina (and to turn into Judith Light on Who’s the Boss?); Roger Davies (Charlie Franklin), the Australian talent manager who sees her potential for a new musical direction; and Erwin Bach (Ross Lekites), the attentive German record company marketing exec who would become her second husband. (Turner and Bach are executive producers on the show.) The infrequent reappearances of Zelma and Alline don’t provide much definition for their characters either, and the actors in both roles tend to overcompensate by playing their scenes too broadly.

There are also odd song choices that feel shoehorned in rather than germane to the plot, like “I Can’t Stand the Rain” as memories of Tina’s past intrude on her present. (I confess to rolling my eyes every time Gran, Little Anna Mae and the Nutbush folks wandered back out onstage accompanied by more chanting.) The most perplexing song placement is “We Don’t Need Another Hero” after the death of Zelma. Lloyd goes for the visual cliché of a candlelight choir traipsing down the aisles and onto the stage, but the Mad Max anthem feels unearned for a character established primarily as an unsupportive mother, who frowns on Tina’s refusal to forgive Ike. It also makes no sense — why is Tina singing “All we want is life beyond the Thunderdome?” Is that a Buddhist thing?

You almost wish the writers had dispensed with the meandering pre-comeback trail and arrived more swiftly at the concert portion of the evening that comes with the exhilarating encores. No matter. What’s important is that the show remains entertaining and the musical numbers — even the head-scratchers — achieve liftoff, which they do thanks to top-notch performers, dynamic lighting from Bruno Poet and muscular sound design by Nevin Steinberg. The splashy reveal of the band on a two-tiered scaffold for a Brazilian stadium show is worth the price of admission alone.

The key to it all though is Warren, who makes us care deeply every step of the way about Tina’s hard-won metamorphosis from a puppet manipulated by men to a superstar in control of her own destiny. She gives an extraordinary, high-octane performance, as dazzling in her tireless vocal and dance duties as she is nuanced in intimate dramatic moments. The show’s flaws fade away next to the star’s incandescence. 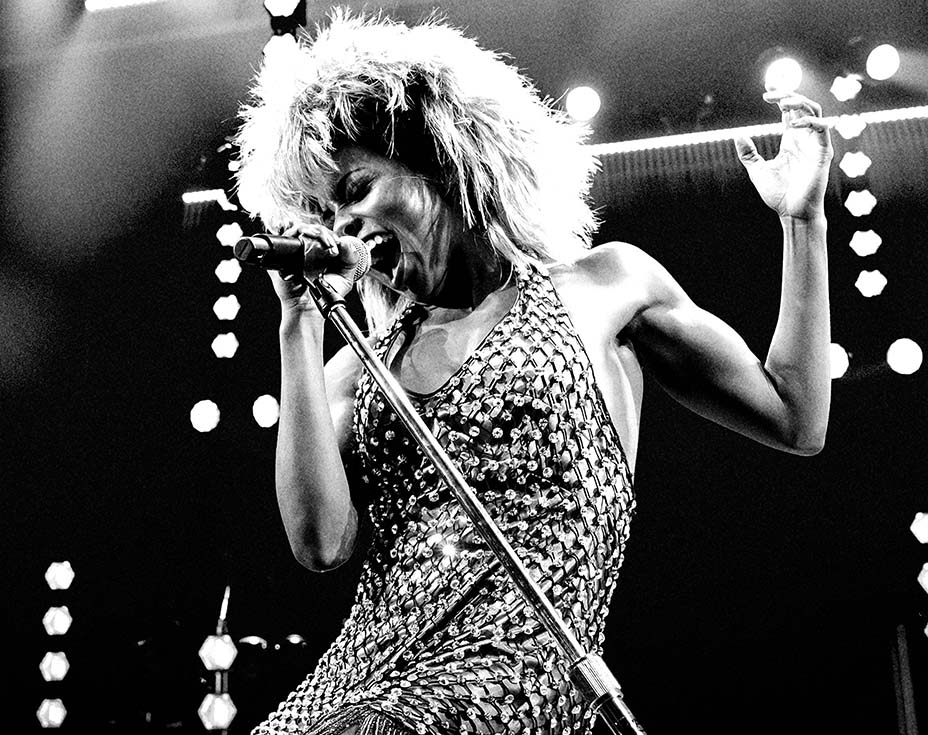