Richard II’s standing as one of Shakespeare’s most incisive dissections of power is fueled — you could say rocket-propelled — by this lean, pacy, visceral and hugely engaging production, in which the delusional folly of the king is matched by the antic disarray of his nobles, ringing alarm bells with anyone in the audience who despairs at the U.K.’s current, Brexit-marred political landscape.

The Almeida has had considerable success with Shakespeare of late, including Ralph Fiennes’ Richard III and Andrew Scott’s singular Hamlet. The theater has now, somewhat miraculously, enticed one of Britain’s finest stage actors, Simon Russell Beale, to play Richard II, in between London and New York stints of The Lehmann Trilogy.

But more instrumental to the tone of the evening than Beale’s casting (as an older than usual king) is the director. With his Measure for Measure at The Young Vic in 2015, an astonishing production that including inflatable sex dolls, hip-hop, live video feeds and projected animations, Joe Hill-Gibbins presented himself as a director unafraid to push the Bard into uncharted waters. He’s also unafraid to cut.

The use of this play’s original title, The Tragedy of King Richard the Second, is the mildest of Hill-Gibbins’ largely winning affectations. Coming in at a mere 100 minutes, during which time the entire cast remains onstage — some playing multiple characters — it’s an exhilaratingly different adaptation. 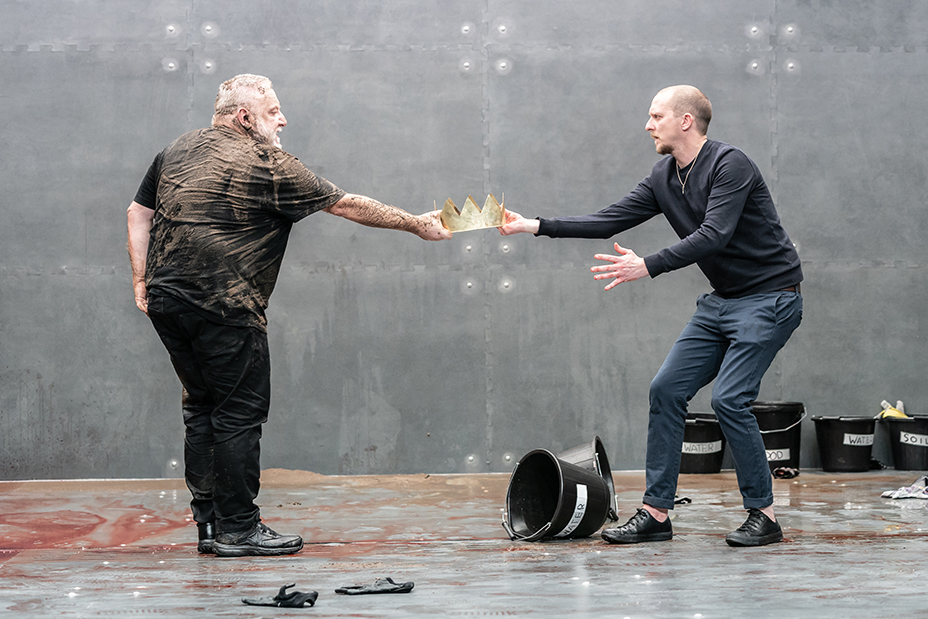 The action takes place on a bare stage, whose high walls are comprised of bolted grey panels, the ceiling a sort of inverted light box. It could equally be a padded cell or a prison yard, designer Ultz offering the starkest and least regal setting the play may have had. Actors wear contemporary casual clothes, Beale’s king dressed in black jeans and t-shirt, the latter accentuating his girth. Rather than the preening clothes horse often portrayed, here’s a man whose complacent belief in God-given power isn’t reflected in physical vanity.

Beale is the only castmember not to wear gloves — including gardening gloves, no less, which come to feature prominently as the political maneuvering of the king, his usurper Bolingbroke (Leo Bill) and the equally self-serving nobles becomes hysterical. The only other props are clearly marked buckets containing water, soil and “blood.”

It starts quietly, with Richard’s normally much later speech in which he bemoans being “unking’d by Bolingbroke,” before returning to the sequence of arrogantly made misjudgments — banishment, land theft, unnecessary wars — that have brought him down.

There will be other moments of introspection and reflection, as Richard’s passage from a reckless sense of superiority to abject humiliation and despair (“I wasted time, and now doth time waste me”) is lent pathos by Beale’s typically flesh-and-blood, beautifully spoken performance; his king may be unable to communicate with the common people, but the actor has no such problems communing with the audience. Joseph Mydell’s Gaunt is also quietly spoken, plangent, his despair at personal and national loss leading him to slip silently into death in Richard’s arms.

But for the most part, this is performed at breakneck speed, noisily (Peter Rice’s sound design either had a bad night, or is simply ill-judged) and edited to scenes and speeches that move the primary action forward, namely the transfer of power; the Duchess of Gloucester is one character conspicuous by her absence. 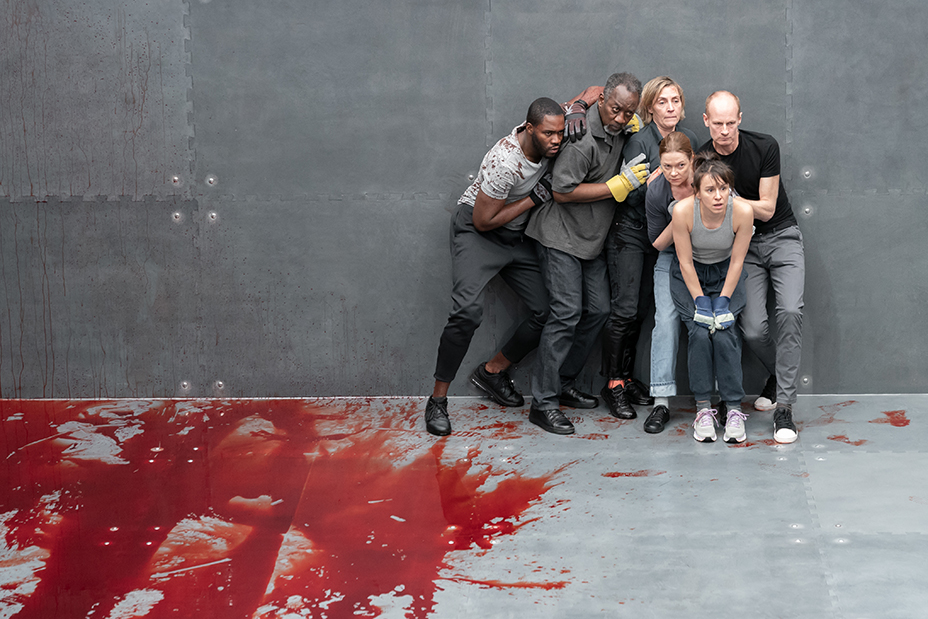 It’s highly physical, not least in the movement of the uniformly good ensemble in and out and around the fringes of the action, often clustering conspiratorially in a corner or scampering out of the way of the protagonists. The buckets frequently come into play: Bolingbroke throwing fake blood at two of Richard’s yes men, to signify their execution; Richard showered in soil and water by tormenting gardeners and quickly turning into a muddy mess — much as his own garden, the kingdom.

And those gloves are brought to good use in a raucous sequence in which one “gage” after another is dropped in challenge by the squabbling nobles, as Bill’s increasingly overawed Bolingbroke struggles to control duplicitous and self-serving men who simply can’t decide where their allegiance should lie.

The chaos and the muddy, bloody mess on stage match the politicking of Bolingbroke’s ultimately guilt-ridden ascent to the throne. And it’s this, rather than Richard’s fall, which resonates most strongly in the here and now, particularly alongside the U.K. parliament’s recent descent into disrepute. How Hill-Gibbins must be rubbing his hands with glee as Gaunt declares, “That England, that was wont to conquer others, Hath made a shameful conquest of itself.”

The play’s transformation into almost rollicking satire does come at a price — with too little pause, Richard’s tragedy is less keenly felt, as are some of the characterizations and the poetry. Nevertheless, this is a radical and dynamic take on an ever-more apposite play.

The Tragedy of King Richard the Second will be broadcast live to cinemas in the U.K. and internationally Jan. 15, in partnership with National Theatre Live.