It’s been a little more than 80 years since Hedy Lamarr achieved overnight stardom with her first English-speaking film, 1938’s Oscar-nominated Algiers, but she’s once again in the spotlight, for reasons that have everything to do with her brains, rather than her celebrated beauty.

Two children’s books out this week tell kid-friendly stories of the actress’s unique contributions to the scientific community: Hedy Lamarr’s Double Life: Hollywood Legend and Brilliant Inventor, by Laurie Wallmark with illustrations by Katy Wu; and Hedy & Her Amazing Invention, by Jan Wahl with illustrations by Morgana Wallace. 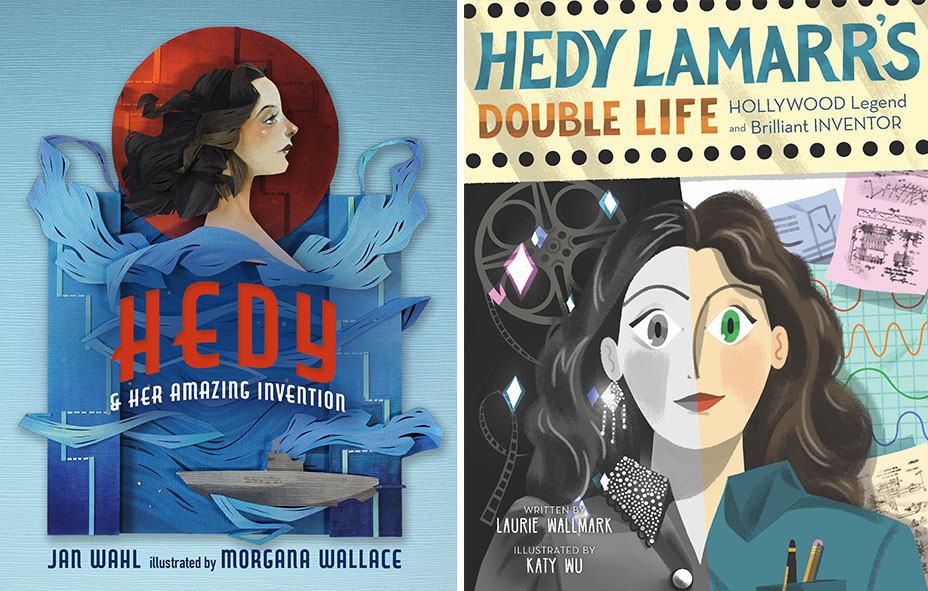 As their titles imply, while both books touch on Lamarr’s Hollywood career, it’s the work she did at night, after a full day on an MGM set, that brought her the most satisfaction, if not notoriety at the time. Indeed, these two stories and their artful, colorful images are the latest to highlight a truism we’ve yet to fully grasp in our culture: When you use a cell phone, GPS or Wi-Fi, you’re doing so thanks to technology that resulted from Lamarr’s most notable invention.

“Hedy’s life was a true dichotomy, and sometimes she struggled with that,” Wallmark says. “But the world as we know it today might not be without her.”

Both books trace the story of Lamarr’s childhood in Vienna, her love for her father, and her quick mind for taking any type of machine apart to figure out how it worked. Her love of playacting, meanwhile, combined with her beauty as she grew older, led the girl then known as Hedwig Kiesler to acting classes, followed by theater and film work in Vienna and Berlin. (Both authors wisely omit Lamarr’s appearance in 1933’s Ecstasy; a scene showing her swimming in the nude caused a scandal when that film was released, even as it also gained the notice of MGM head Louis B. Mayer.)

Rechristened Hedy Lamarr by Mayer upon her arrival in Hollywood in 1938, she co-starred in several high-wattage MGM films, including 1940’s Boom Town with Clark Gable and Spencer Tracy and 1941’s Ziegfeld Girl with James Stewart and Judy Garland – in the latter, Lamarr’s character earns fame, though not happiness, as a result of her stunning looks. Art seemed to mirror life, as both books explore the idea that the actress turned to her childhood love of inventing, setting up a draft table and tools in her home, so she could tinker with projects after a day on a soundstage. 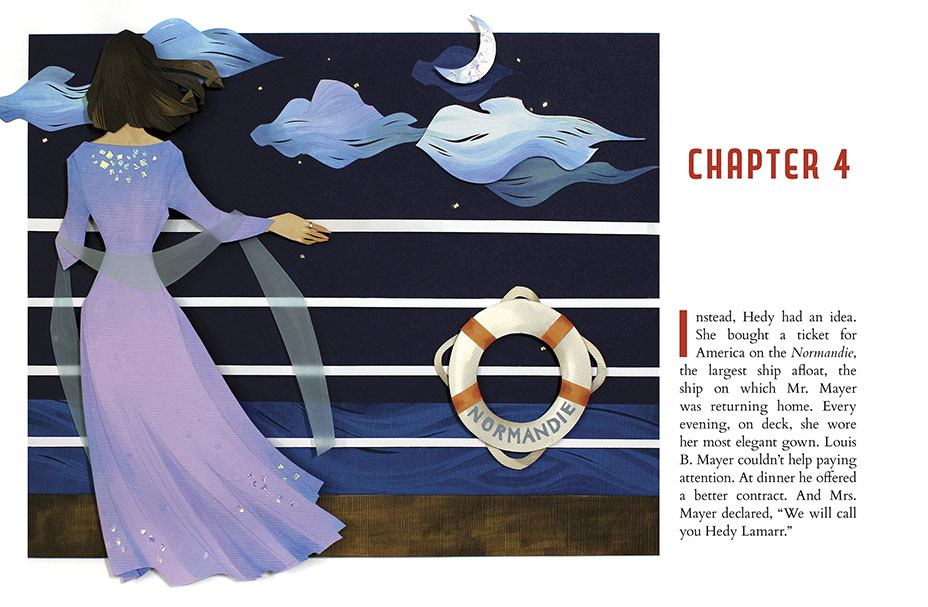 “Her beauty did not play a leading role in her ambitions for her life. This was proved by the fact that even while she was working on movies, in her spare time she was continuing with her inventions,” notes Wallace, a British Columbia-based mixed-media artist; Hedy & Her Amazing Invention is her first project as a children’s book illustrator (Wahl, a prolific, award-winning children’s book author, passed away on January 29 at the age of 87). “In a sense, she must have felt trapped by her beauty. Her value at that time was wrapped up in her appearance and her success in movies. But this did not dull her scientific curiosity, or her incentive to invent.”

Some of Lamarr’s ideas focused on problem solving, like a glow-in-the-dark dog collar or a traffic signal that would indicate when the light was about to change. But in the earliest days of World War II, as reports of the European conflict included news of Germany jamming the signals of British torpedoes, Lamarr devoted herself to finding a solution; she enlisted a friend, George Antheil, a composer and former weapons inspector, to partner with her on the project, and the two of them developed a system that became known as frequency hopping, allowing ships and torpedoes to communicate via radio signals without fear of jamming or interference.

That concept is explained in easy-to-comprehend language and accompanying illustrations in both books. “Age range can evolve with a book like this,” says Wallmark, whose preview work was 2017’s Grace Hopper: Queen of Computer Code, about the American computer scientist and rear admiral of the U.S. Navy. “I’ve read the book to preschoolers, and I’ve done school visits with seventh graders. The younger ones might not get all the science, but they’ll get the rest of the story.”

Lamarr and Antheil received a patent for their invention in August 1942; by then the United States had entered World War II, and the pair offered their device to the U.S. Navy, which deemed it too difficult and costly to implement. Fearing another country might be able to use the guidance system, however, the Navy declared it classified. It would be 40 years before the technology would be declassified, and by then the patent had long expired. Lamarr and Antheil never made a penny from their invention, which ultimately became the precursor to secure wireless communications. 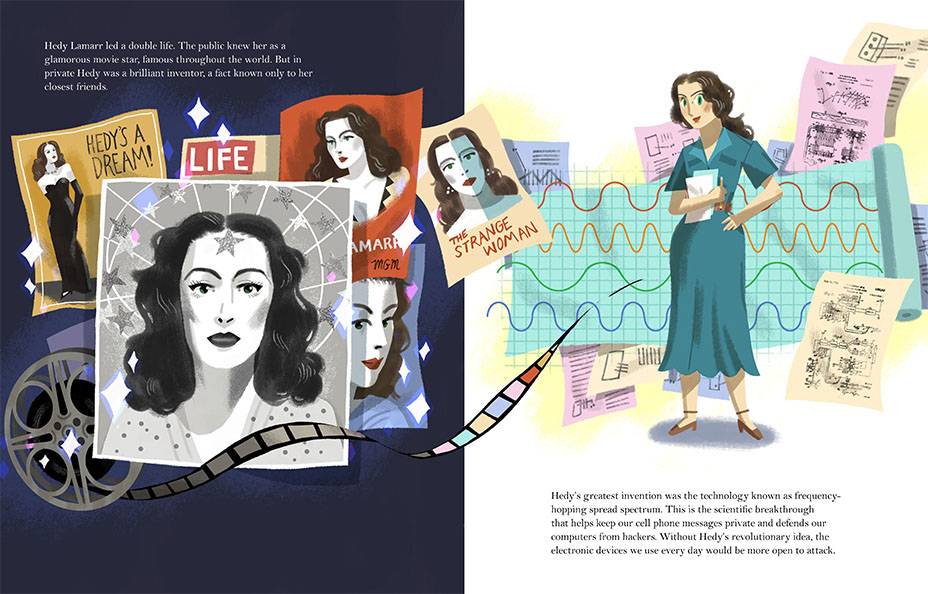 Hedy Lamarr died in 2000 at the age of 85, but by then the scientific community had begun to acknowledge her achievements; in 1997, 55 years after she and Antheil received their patent, they were recognized with the Electronic Frontier Foundation’s Pioneer Award, a moment illustrated in Wallmark’s book, which also mentions that in 2014, Lamarr was posthumously inducted into the National Inventors Hall of Fame.

This isn’t the first time Lamarr’s success beyond film has been highlighted. Richard Rhodes’s Hedy’s Folly: The Life and Breakthrough Inventions of Hedy Lamarr, the Most Beautiful Woman in the World was published in 2011, while a pair of graphic novels – the latest, Hedy Lamarr: An Incredible Life, by William Roy and Sylvain Dorange, was released in 2018 – also have sought to discuss the yin and yang central to Lamarr’s personal and professional history. But the two books released on Tuesday are the first written with children in mind, and Wallmark says the actress should be a role model, for girls and boys alike.

“What Hedy Lamarr’s life teaches us – and it’s an important message for all kids to realize – is that you don’t have to choose to be just one thing,” says Wallmark, who earned degrees in mathematics and computer science and taught the latter subject before becoming a children’s book author. “It’s OK to be a movie star and a brilliant inventor, or it’s OK to be a football player and also in the glee club, for example. We also tend to grow up and then, whatever you choose as your major in college, that’s what you do. But Hedy shows us anything is possible.”