The last time Victor Garber was onstage in a Broadway musical was 1994. That was a revival of Damn Yankees, and his performance as the Mephistophelean Mr. Applegate earned him his fourth Tony nomination. Before that, his resume holds such celebrated musical credits as playing Anthony in the original cast of Sweeney Todd and John Wilkes Booth in Assassins.

While during the past 20-plus years he’s remained busy in film (Argo, Milk, Titanic, The First Wives Club) and television, most recently as Dr. Martin Stein/Firestorm on DC Comics’ Legends of Tomorrow, Garber is now back to singing eight times a week at the Shubert Theatre as the lovable curmudgeon Horace Vandergelder in Hello, Dolly! Garber and Bernadette Peters recently took over the roles originated in the smash revival by David Hyde Pierce and Bette Midler, respectively.

“When I got back into the rehearsal room, I realized that the theater, that was my first love,” Garber says. “I loved doing television and movies, too. But the theater is where it all started for me. I feel like I’m back to what I was meant to do.”

Garber sat down with The Hollywood Reporter to talk about dusting off his singing voice, working with Peters and how this classic musical — winner of four Tony Awards last season — relates to 2018 audiences.

What do you love most about playing Horace Vandergelder?

He’s manipulated every moment of the play, by everyone around him and then Dolly is of course the master. So the fun is that Horace thinks he’s in control and assumes that he is and has the arrogance of someone who is. And he is, in fact, completely out-of-control and comes to understand that, at the end of the play. I love that moment when he realizes this is who he should be with. I find that incredibly sweet and moving.

This is your return to performing in a musical after a long hiatus. Have you kept up singing in the interim years?

No. As my friends know, I have a very neurotic thing about singing now, and I have for years because I just haven’t done it for so long. I’m such a perfectionist so I don’t sing much at all. And then, this was sort of the perfect thing to get me back into singing. It’s not as demanding as songs I’ve had to sing in the past. I don’t panic every morning when I wake up, which is what I generally do when I have to sing something.

Are you enjoying it?

Yes, I’m really enjoying it because I’m remembering that I still can do it. But I’m not going to be doing a nightclub act anytime soon. 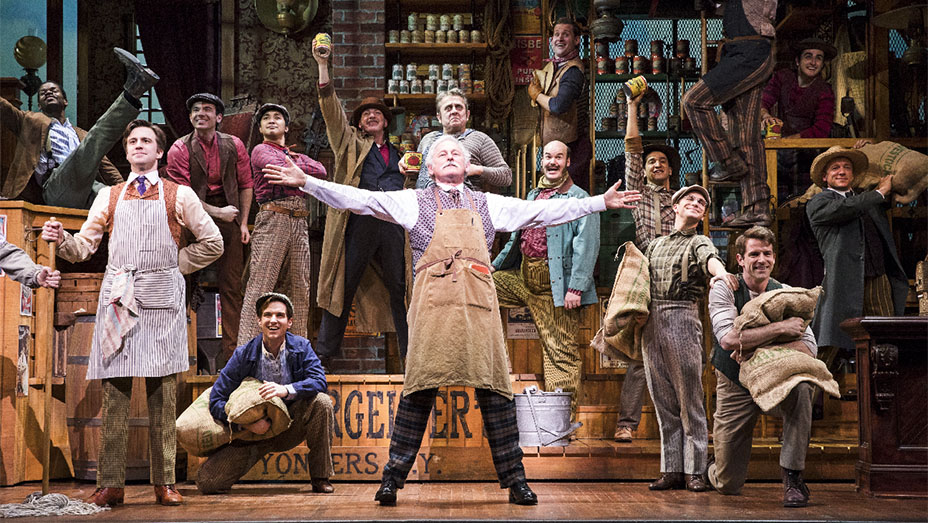 There’s amazing dancing in the show. Did you have to do any dance training?

Well, I’m what they call an actor who moves. The dancing is so expertly accomplished by the amazing group of people on the stage. I’m in awe of them. My specialty in the show — and I’m so grateful because I have a bad knee and a bad foot — is marching. And I can do that. Barely, but I can do it.

You worked with director Jerry Zaks on Assassins in 1990. How is it to be collaborating again on Hello, Dolly!?

It’s a luxury. Jerry and I have done three plays together, and I loved the experience always working with him. A year or so ago, we were at a dinner together, and we both said, “Gee, it would be great to find something to do together.” I think that was before he even knew he was doing this, and so, this just worked out so perfectly.

You also worked with Bernadette Peters briefly on the 1997 TV movie of Cinderella.

I’ve known her forever, and we did cross paths on Cinderella but really had literally nothing to do with each other in the show. I, of course, revered her. I think she is an icon and she always amazes me in everything I’ve ever seen her in.

Many young people probably know you most as a DC Comics superhero from Legends of Tomorrow. Do you feel like with Hello, Dolly! you’re now introducing new audiences to the theater?

Well that’s always the hope, isn’t it? I have friends who have young kids who have never really been to much theater. And one of their boys just loved it. He was a big fan of Legends of Tomorrow, and when his mom showed him a picture of me, he said, “How do you know Martin Stein? That’s Firestorm.” I was honestly concerned about how these kids would respond, and his mom said at the end he turned to her and said, “I love this.” That really means the world to me.

What is it like bringing this musical to Broadway in 2018?

When you have source material written by Thornton Wilder, who’s arguably one of the greatest American playwrights, you realize that there are universal truths. That’s what art is about. We somehow see ourselves in a different way or we are reminded about something we forgot. “Oh wait, I do actually care about other people,” or whatever it is. This play, aside from all of that, the feeling of joy that is palpable in that theater at the end of every performance is so uplifting. I think it’s very needed at this time in our history.