Money corrupts. Not just the possession of it, but the lack of it; and democracy, justice, human decency will all suffer at its hands. This is perhaps the most chilling, if not unfamiliar suggestion in Friedrich Dürrenmatt’s 1956 masterpiece The Visit — parable, revenge tragedy, lament for a continent that had lost its way after war. That was Europe, though an unspecified country, and the monetary offer that destroys the soul of a town had no currency, it was merely “a billion.” Now Tony Kushner gives it a sign, the dollar, when he casts Dürrenmatt’s darkly comic view over America.

The Visit isn’t produced that often, despite the fact that it’s one of the great modern plays. (It was last seen on Broadway in a long-gestating Kander and Ebb musical adaptation that had a brief run in 2015.) Not surprisingly, Theatre Complicité tackled it, in the late 1980s, embracing Dürrenmatt’s absurdist leanings. Kushner has plenty of fun with that — the evening crackles with weirdness — while also attempting to ground the drama in the particularity of place, using the story as a prism through which to view his country’s increasingly challenged values.

But he does make quite the meal of it. With all the potshots at American capitalism and society, and some endless rhetoric, it feels that the more Kushner tries to make the play his own, the more he dissipates its power.

Thus director Jeremy Herrin’s production resonates not through the new text, but the performance of the formidable Lesley Manville, arguably one of her best ever, and who with Hugh Weaving brings lashings of lust, bitterness, regret, cruelty and pathos to one of the most twisted couplings in theater. 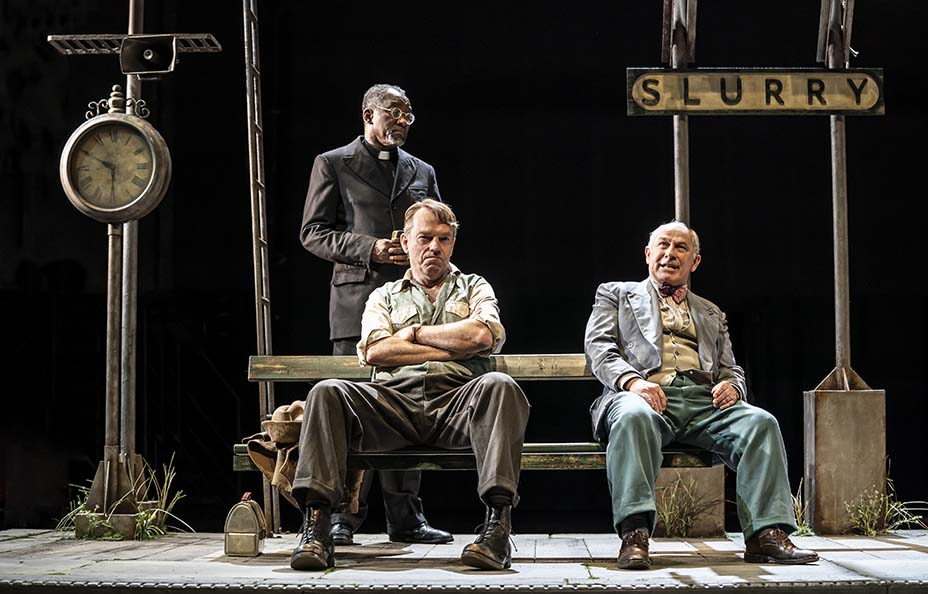 The period remains the 1950s. The appropriately named town of Slurry, in New York, is languishing in post-war depression. The play opens with some of the town’s citizens sitting at the train station, as train after train roars past (accompanied by a waft of steam from beneath the stage). Once a “destination,” now the town isn’t even a stop. Factories, businesses, entertainment venues alike have all closed.

But there is a new hope, in the form of  Claire Zachanassian (Manville), the richest woman in the world, who is returning to her hometown for a visit, preceded by the many reports of her charitable deeds. The mayor (Nicholas Woodeson) has enlisted shopkeeper Alfred Ill (Weaving), Claire’s childhood sweetheart, to lead the welcoming party. Someone worries that the extra exclamation point in the welcome banner “might convey desperation.” But the smell of millions is in everyone’s nostrils.

When Zachanassian finally arrives, it’s with a flourish befitting this larger-than-life billionairess — pulling the emergency cord on the express train and almost derailing it, before paying off the driver with more money than he, or anyone in the vicinity, has seen in their lives. At first glance, there’s a haute couture elegance about her (costume designer Moritz Junge gives Manville some sensational clothes), but one which she herself is quick to undermine by revealing that she’s barely flesh and blood — two artificial legs are introduced with a tinny tap, for starters.

The tale of Claire’s limbs is the story of her life: one lost in a car smash, the other a combination of cancer and saber duel, a hand to an air disaster. She’s been around the world, and owns much of it, though none of it would have happened had her first husband and source of her wealth, a dodgy Armenian businessman, not plucked her out of a German brothel — the reason for her being there going all the way back to Alfred. 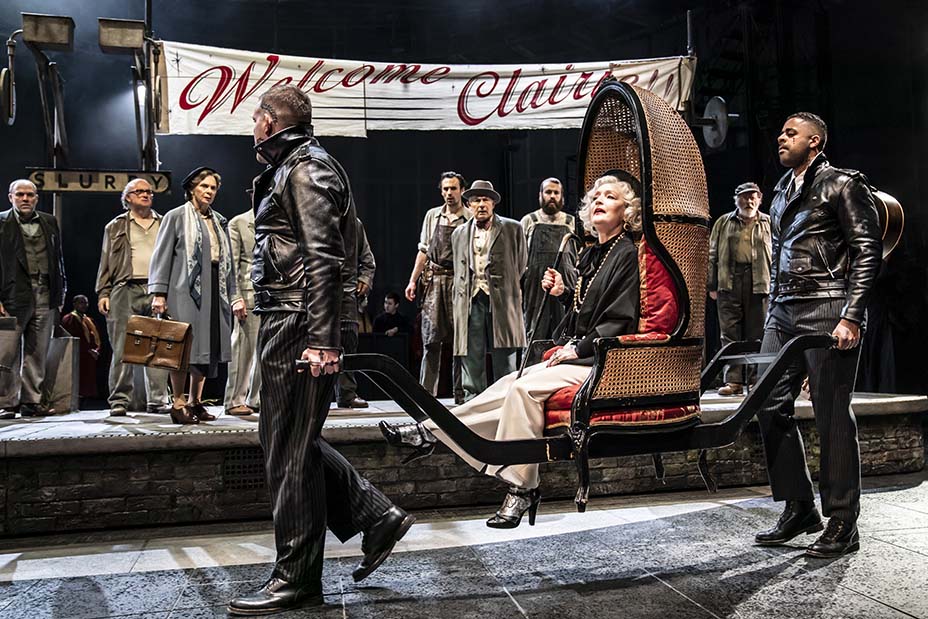 At first, things seem to be going to script. Though initially reticent, Alfred warms to his task when confronted by his old flame, the two very publicly (and hilariously) recalling their sexual shenanigans, as teenagers in the town.

But Claire is already slipping out odd requests — how much would it cost the doctor to give a false death certificate, would the police chief “wink at sin.” As her entourage and luggage start to arrive — including a butler who looks like a funeral director, two blind eunuchs, a panther and a sedan chair carried by two former convicts from San Quentin – the sense of imminent threat goes through the roof.

And when she does offer the town its lifeline, that almighty check, there is a condition attached: the death of Alfred.

As the billionairess puts it: She wants to “buy justice.” The fact that her butler is a former Supreme Court justice suggests she’s already started. Arguably, the transposition to America ought now to start adding to the play’s impact. Instead, both the textual references and the Americana of the production design feel like unnecessary padding — making us pine for the universality of the original work.

The first act — Zachanassian’s arrival and offer — does thrill and chill; the second has some lovely comic moments as the town’s slow capitulation manifests in the rush of business to Alfred’s shop, everyone buying on credit while sporting shiny new shoes. Thereafter, the three-and-a-half hours begins to feel like a very long night. 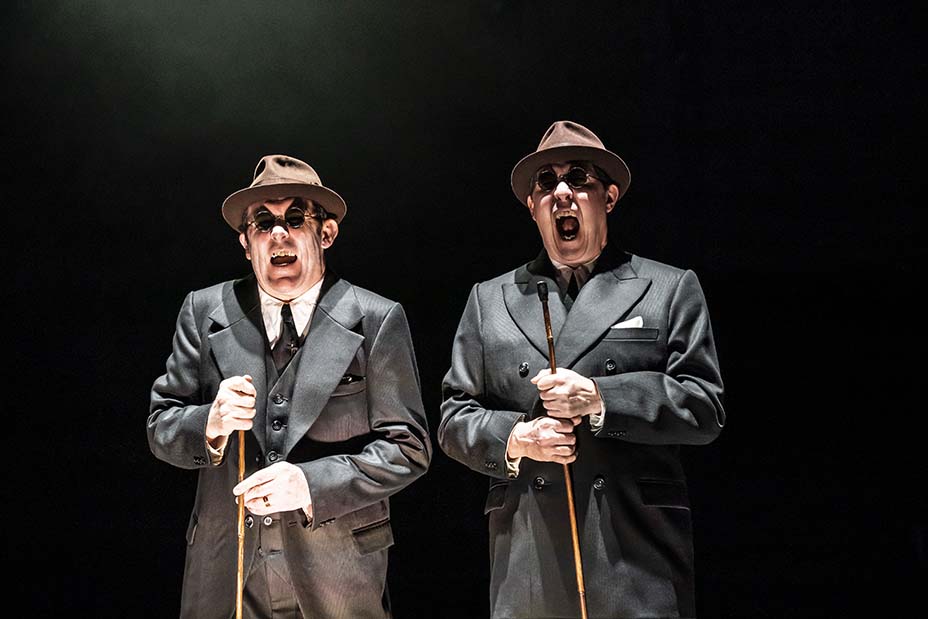 But then there’s Manville. Always a potent performer, the actress brilliantly ensures that Claire isn’t limited by her baroque eccentricity — somehow making her sexy, alluring (still showing echoes of the “vixen” in Alfred’s memory) but also the frightening, controlling impresario of the freak show that has taken over the town. And she seems to be channeling Bette Davis in her haughty command of everyone around her, not least the men.

Often she’s a scream, whether torturing husband No. 7 by ordering him, simply, to “think,” or going into a fit of pique when her next husband turns out to be a French absurdist theater director rather than the Italian neo-realistic film director she has requested, or asking of her butler, “Boby, have you found my leg?”

We feel the pain of the young woman so abominably mistreated and the “ache” of a lifetime spent waiting for revenge, while boggling at the monster she’s become. It’s a truly scintillating performance.

Alongside her, Weaving carries Alfred’s more pronounced character arc in these two or three days — from reluctant frontman to nostalgic stud, from mortal fear to dignified acceptance of his guilt and fate — with an affecting conviction. The rest of the cast fails to really impact, other than Paul Gladwin and Simon Startin as the eunuchs Koby and Loby (who have already paid the price for their misdeeds); with their plasticine faces and screechy harmonies, they are truly terrifying.