In the ongoing battle for the soul of Los Angeles, a growing coalition of the city’s most prominent homeowners are taking the side of tradition.

In April, the Beverly Hills City Council granted Taylor Swift landmark status for the Samuel Goldwyn mansion, built for the film pioneer during the 1930s and purchased by the pop star two years ago. In June, Angelina Jolie bought Cecil B. DeMille’s Los Feliz estate for $24.5 million, with plans for an extensive renovation that honors its Golden Age glory (DeMille lived there from 1916 until his death in 1959). Ditto for The Voice‘s Adam Levine, who in August bought an $18 million French Regency-style home by architect Caspar Ehmcke in Holmby Hills and has plans for a historically faithful redo. Meanwhile, Tom Ford is several months into a likewise faithful upgrade of the legendary Bloomingdale estate, which he purchased in December.

This trend of A-listers purchasing homes built and owned by earlier generations of Hollywood royalty is taking hold in the midst of L.A.’s huge residential construction boom, which has seen more than 30,000 housing permits issued in each of the past two years. Many conservationists fear that one of the city’s great tethers to its past — its rich and varied architecture — is at risk of being severed. Cue the star buyers with the cash and taste to restore legacy homes (instead of knocking them down to build a tech-loaded megamansion from such superdevelopers as Bruce Makowsky and Nile Niami). “In the last 15 years, this part of the market has taken a leap forward,” says Hilton & Hyland’s Linda May, who was involved in both the Jolie and Levine sales. 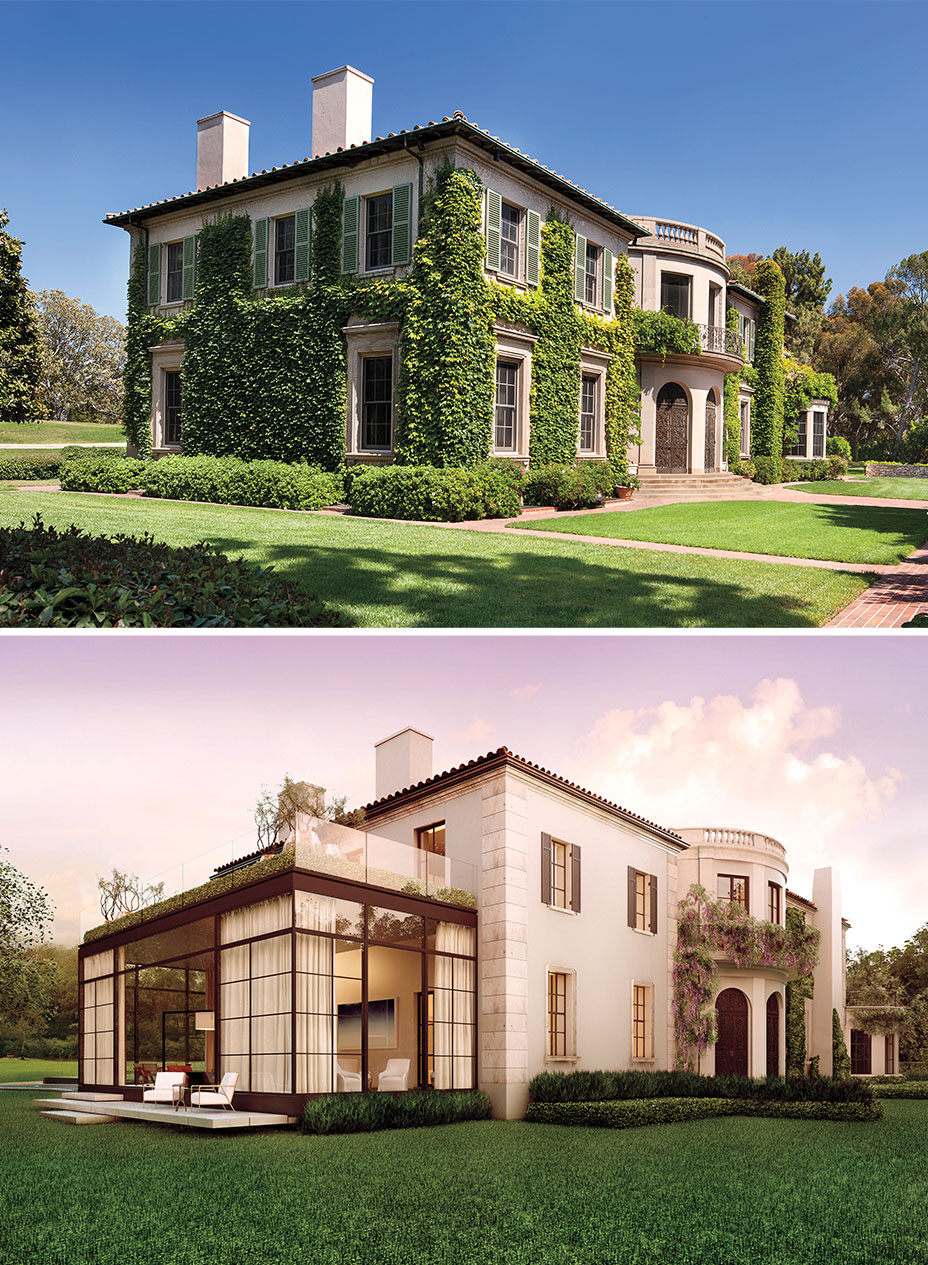 Historic homes generally fall into three categories. Landmarked homes are the most protected: Any work done on them (even in some cases on the interior) requires city approval. Homes located in a Historic Preservation Overlay Zone (HPOZ) require approval from a neighborhood commission, but only for significant exterior work. It’s the largest category — historically significant homes with no landmark status or rulebound ZIP code to protect them — that most concerns local conservationists. Linda Dishman, president and CEO of the L.A. Conservancy, says that the city’s number of designated historic neighborhoods, known as HPOZs, has spiked in recent years as residents seek protection from overzealous developers. Dishman applauds the recent spate of stars committing to historic renovations. “There is a misconception that if you have a historic house, you can’t have modern art or a comfortable sofa,” she says. “We need to get beyond that myth.”

Architects, consultants and real estate agents who specialize in this arena say the process of restoring a historic home takes patience, passion and a sizable pocketbook. At the highest end of the market, bespoke construction costs can easily reach $500 per square foot or more. Take the 10-acre Owlwood Estate in Holmby Hills: Sonny and Cher once lived in its Robert Farquhar-designed mansion, as did Tony Curtis and 20th Century Fox co-founder Joseph Schenck. It’s as pedigreed a palace as you can find and has undergone minimal change since it was built in 1936. Sturmer Pippin Investments purchased the property in late 2016 for $90 million — then relisted it in July for twice that. What’s changed? Nothing — but included in the new $180 million price are completed plans for a renovation that would gently restore the original property (creating natural light wells, for example, by adding French doors in the living and dining rooms) and add a massive new wing, raising the total square footage from the current 12,000 to more than 80,000.

Mercer Vine founding partner Adam Rosenfeld not only has the Owlwood listing but also has helped oversee the proposed renovations. “This is much harder product to build [than a spec home],” he says, adding that construction costs per square foot could soar above $1,000. The challenges for Owlwood are unique because of the scale of the project and the property’s sprawling grounds, home to a number of protected trees (fig varietals) that Rosenfeld plans to preserve at all costs (though the future of the property will, of course, ultimately be determined by the buyer). 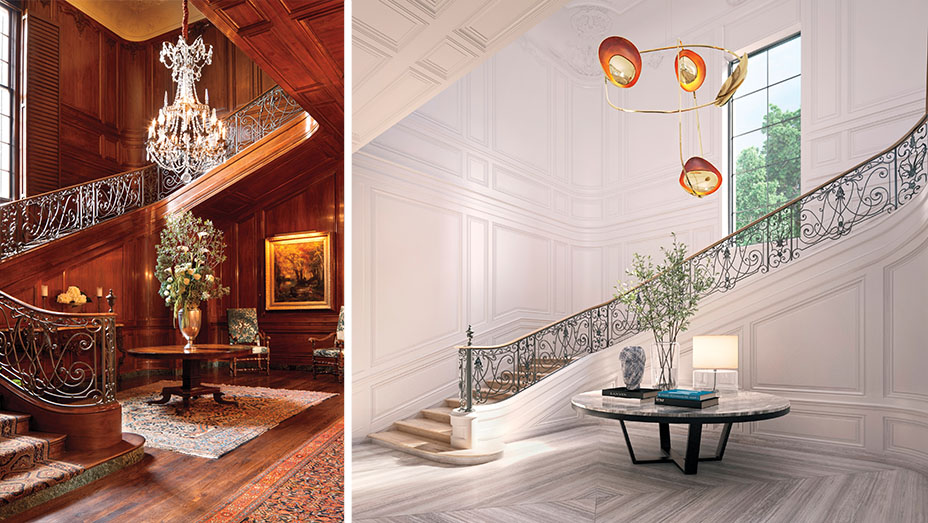 Rosenfeld chose New York boutique Meyer Davis and local firm KAA Design Group from among a dozen architectural firms that drew up vision boards, renderings and pricing models. The mandate, he says, was to show how the ornate details of the Italian Renaissance-style home, from handcrafted moldings to immaculate millwork (molding, paneling and other interior wooden accents), would be preserved and absorbed into a more modern version.

Architect Barbara Bestor, who specializes in sensitive rehabilitations, recently completed a restoration of John Lautner’s Silvertop in Silver Lake, purchased in 2014 by Beats by Dre president Luke Wood for $8.55 million. Upon assuming a new project, says Bestor, her first task is to ferret out how the vision of the original architect, whether Rudolph Schindler or Richard Neutra, may have been bastardized by a former occupant. “I am totally all about the original drawings,” says Bestor, who spends days at the archives of the Getty and U.C. Santa Barbara studying such documentation (she and others also work with restoration consultants who can advise on more granular historic treasures that might be missed by a less expert eye). “There was a spate of bad renovations where someone would just gut the inside of a house and then [still] call it a Neutra. Well, no, it’s not a Neutra. That is why I got into doing this, because you are protecting and honoring the heritage while trying to make things livable.” 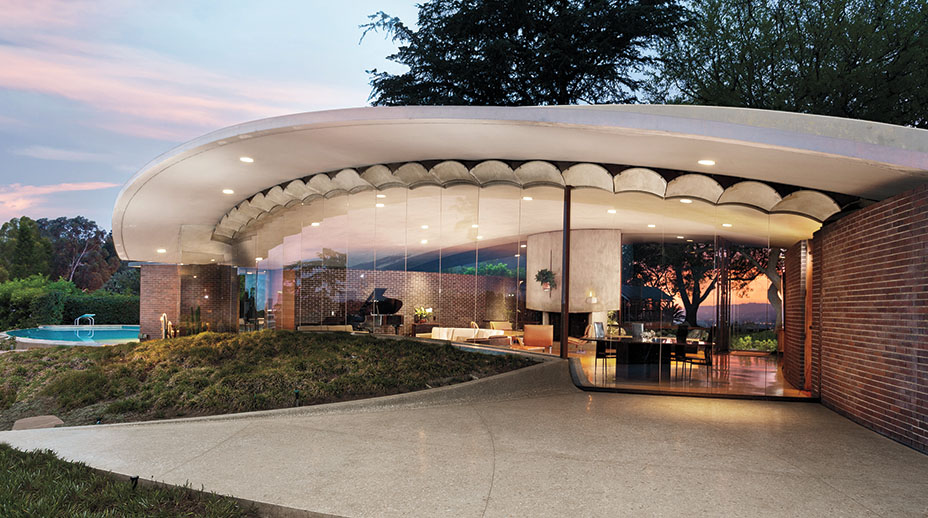 Architect Linda Brettler has on several occasions had to advise clients against adding a second story to a historic home. In an HPOZ, the front facade is the most regulated element of a house; she recalls one client in Hancock Park who wanted to add a new porte cochere but was told non by the neighborhood committee, which doesn’t allow the construction of new, contemporary porte cocheres. Indeed, sourcing materials that won’t compromise the look of the original structure yet still meet current environmental standards often is tricky. But one luxury of renovating in L.A., notes Brettler, is its sizable, if shrinking, pool of artisans that provide world-class wrought iron, millwork and custom tiling.

Brettler, who rehabilitated the John H. Blair mansion near Nichols Canyon where she lives with husband (and Mad Men creator) Matthew Weiner, says it’s impossible to predict what structural or mechanical problems you’ll find once you open up the walls of an older home. “I tell clients the building is organic; it needs to live and breathe and needs maintenance and love and care,” she says. “And it also needs to be reflective of the time, but the great thing about these residences is that they are still viable.” Keeping them that way “can be the most costly part of the renovation,” she adds. “And the client usually hates it because they don’t see any of it.”