Installing a status amenity means never being told that it has an expiration date. Case in point: home theaters.

“In the ’80s, overhead projectors were a huge ‘wow’ factor,” says Brian Gadson, a top L.A. audio-visual technician who did Patricia Heaton’s installation. Advancements in video and sound technology have removed the bulky projector, changing the look and feel of the space.

“Everybody seems to be traumatized by those old screening rooms with the ugly seats and all that black leather,” says Kishani Perera, an L.A.-based designer who has worked with Ben Stiller, Rachel Bilson and Harry Styles.

Now boxy chairs are being replaced by velvet and silk sofas. “People are saying, ‘Even though we are spending over $1 million on a screening room, we don’t want it to look like that,’” says Perera. “They want it to be more of an extension of the home.” 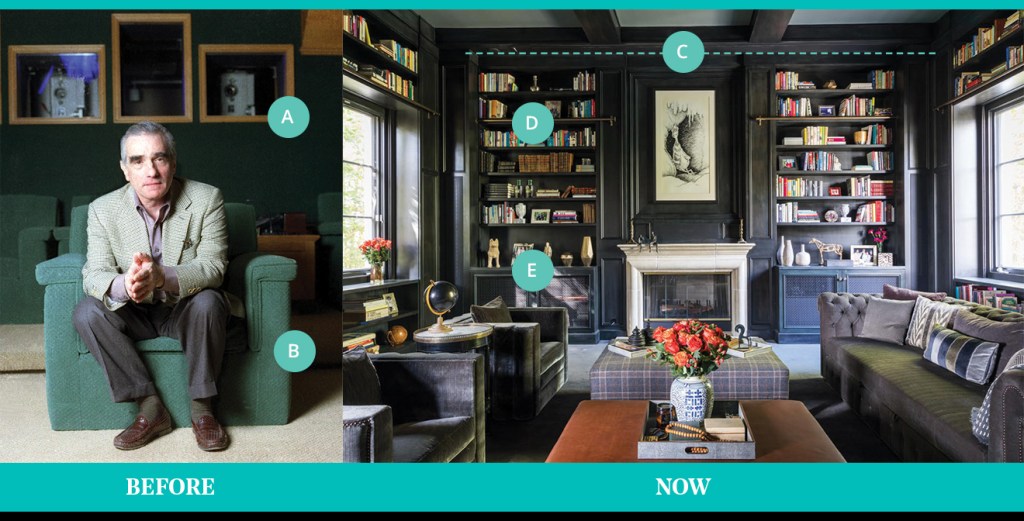 A. MASSIVE PROJECTOR
Back in the days of film, homeowners needed to sync up at least two stationary 16mm projectors to show full-length features. “Those are really big and really hot,” says Gadson, who has been installing theaters for industry clients for 30 years. “In the ’80s, we were still living with VHS, Betamax and DVDs; it was all about how many racks of equipment you had.”

B. BOXY SEATING
Sunken, La-Z-Boy-like chairs, staggered by risers for democratic viewing, have been the uniform of screening rooms since the ’80s. Aesthetics weren’t as high a priority due to “light seepage”: Projectors required a near blackout setting, making design elements secondary.

C. HIDDEN SCREEN
In this home theater owned by an industry executive and built in 2017, an 8-by-12-foot screen drops down in front of the bookshelves at the push of a button. More importantly, the screen can be hidden from view when homeowners want to do a little more “chilling” with the family and a little less Netflixing. “There is a slit in the ceiling where it drops down,” says Perera.

D. LIBRARY, WET BAR OR SALON?
Streamlined technology that takes up far less space than the old projectors has allowed designers to include a host of new amenities — wet bars are a popular option — and more diverse design elements, like bookshelves, sofas and wood paneling. “The built-ins were a deep ashy gray-tobacco combination,” says Perera.

E. AUDIO IS PART OF THE AESTHETIC
In the early 2000s, built-in, flush-mounted speakers were a massive improvement over the bulky stand-alone speakers that had been the norm. Coupled with colored sound panels, speakers can be incorporated into more lush and cozy environments by designers without sacrificing sound quality. “We wanted a well-worn feel,” says Perera.