Is Sugarfish sushi worth waiting hours for? What about in New York, where a lone outpost of the omakase-ish standby opened late last year? After being seated following a two-hour wait, Los Angeles restaurateur Alvin Cailan, owner of Eggslut, inquired about the current wait time and tweeted his shocked response: “At Sugarfish in Manhattan … 5.5 hour wait …”

But, really, what’s a few hours after six long years? That’s pretty much how long New Yorkers had been clamoring for their own outpost of the popular sushi chain, says Clement Mok, co-founder of Sugarfish’s parent company, Sushi Nozawa Group, who notes that the expansion had been in R&D since 2010.

Still, the excitement surprised even Mok: “It wasn’t until word got out that we were coming to NYC that we realized the huge brand awareness and following in the city.” And when Sugarfish finally opened its doors on 20th Street in Manhattan’s Flatiron district, four-hour lines became the norm, as devotees of chef Kazunori Nozawa (once dubbed the “sushi Nazi”) and novelty seekers alike mobbed the place.

Laying siege alongside them were foodie elites, who began wondering aloud how a middle-tier Los Angeles chain restaurant could disrupt the vaunted New York dining scene. New York magazine’s restaurant critic Adam Platt dubbed Sugarfish “middling,” describing sushi that had the texture of a marshmallow — an exception was the Santa Barbara uni, Platt which had “the consistency of watery, artisanal toothpaste.”

Not about to be outgunned, The New York Times‘ critic Pete Wells took Sugarfish to task for its self-service approach to wasabi. “You apply your own,” he wrote, “from some concentric bloops of stuff that tastes like watery horse-radish and looks like a green version of the poop emoji, without the smile.” 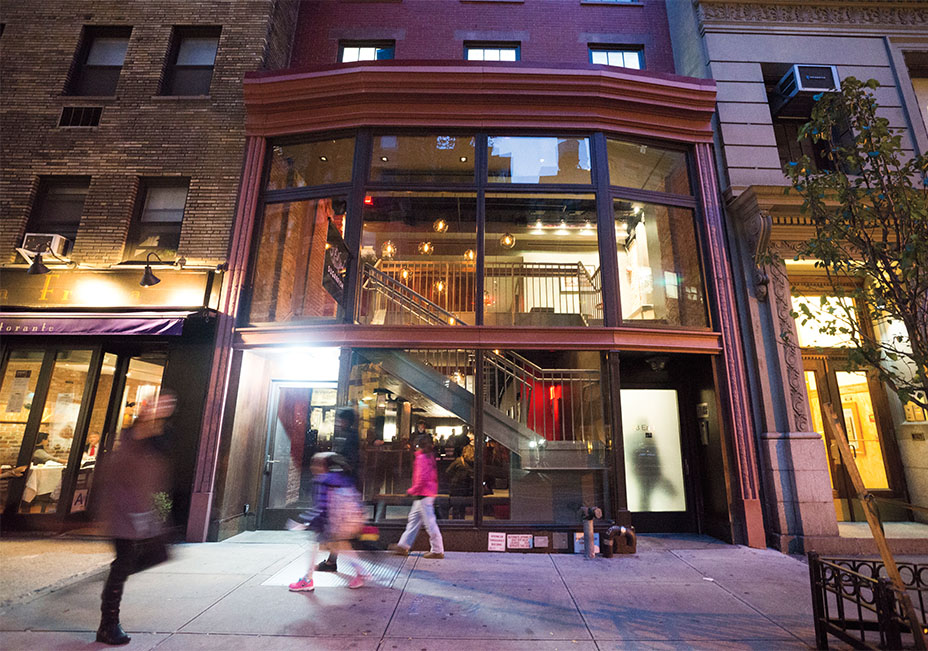 Sugarfish’s popularity, however, has always been driven by devoted followers more than by discriminating critics. When its first location opened in Marina del Rey in 2008, an unenthused Jonathan Gold, writing for LA Weekly, called the fish “fine” and the crab rolls “meager.”

Although never L.A.’s best sushi, Sugarfish might be the best loved. Despite his tweet, Cailan, whose Eggslut pop-up in Nolita just became permanent, insists he has no problem waiting for his hometown hamachi: “Leave your number, hit a bar or go to a movie,” he tells THR. “Sugarfish is always worth it.”

Part of the explanation for Sugarfish’s outsized popularity in New York, and for the not exactly surprising backlash among the city’s culinary cognoscenti, is its provenance. These days, Los Angeles — not Williamsburg or the West Village — appears to be the neighborhood many New Yorkers covet most; and aspirational Angeleno exports, from Moon Juice to maguro, pull New Yorkers close like gravity, making what’s up in the middle of Marina del Rey seem magical in Manhattan.

What's Behind the Wild Rise of Poké in Los Angeles

It’s also understood that Los Angeles knows a few things about sushi that New York does not. “Sushi’s a way of everyday life in Los Angeles,” says Andrew Knowlton, who compiles Bon Appetit‘s “Best New Restaurants in America” awards each year. “In New York, rarified, sanctimonious, wallet-crushing sushi has always been the draw, and Sugarfish, with its affordable omakase, brings more sunshine here.”

Wells admits that it’s the pricing that made him interested in the first place. “Even though I can get the Times to back me up to go to Ichimura,” he says, “I am still super interested in where to get a good sushi meal for 40, 50, 60 dollars.”

Knowlton also points out that Los Angeles’ ascendant restaurant scene has its eyes on East Coast expansion. “L.A. restaurateurs now have the confidence to come to New York and conquer it,” he says. It’s not just sushi: Eggslut quickly sold out on its opening day. Gjelina and Gjusta’s Travis Lett is opening a New York concept this summer, and Sugarfish, wasting no time at all, opened its second Manhattan restaurant, KazuNori, which specializes in handrolls, in March.

Perhaps after this latest incursion, New Yorkers will embrace the “lighten up” lesson implicit in Sugarfish’s Trust Me tasting menu, suggests Knowlton. “We take ourselves a little too seriously here. Maybe we’ll learn something.”

Or maybe it means a restaurant city rivalry is brewing. “I’m not sure there’s a rivalry yet,” says Wells. “But there could be one. War could break out at any time.”