Isabella Olaguera was beginning to feel “useless” and without purpose when she found herself out of work in March for the first time in four years. Like many crewmembers in Hollywood, the New York City-based assistant director (who has done work for Facebook, WNBA and Equinox, among other companies) saw her employment plans obliterated due to the novel coronavirus and subsequent entertainment production shutdowns. It was a tough blow for someone who usually faces a dry work period in the winter, followed by a busy spring. After she penned a Facebook post asking how many of her friends were in the same situation, the post, along with the multiple comments it inspired, became the opening anecdote in a Hollywood Reporter story about below-the-line unemployment.

Then, while cleaning out her garage one day, the filmmaker saw another Facebook post, from the House of Good Deeds. The charity was asking if another organization might able to take a pallet of perishable foods it had just received and distribute the food to those in need. “I was like, ‘I have a group of people, let’s make that happen,'” Olaguera says. She called up Adam Richlin, the rental manager at Lightbulb Grip & Electric Co. in Brooklyn, who offered her space in his warehouse and recruited friends to handle processing the pallet. As they organized, the group missed the food’s 48-hour deadline, but the seed of an idea was planted: “I just started looking for ways to get groceries to people and wound up creating a budget and forming a team,” Olaguera says.

So began Feed the Freelancers, an expanding initiative operated largely by out-of-work and furloughed entertainment workers that delivers free food to independent contractors and self-employed individuals who have lost income due to the coronavirus crisis. Fueled half by food donations from local organizations and wholesale distributors and half by financial donations via GoFundMe, the initiative has now fed more than 1,000 individuals, expanded to Philadelphia and is in the process of creating outposts in Los Angeles and New Jersey. According to surveys that recipients of the aid fill out, 48 percent of those receiving groceries work in film and television, 25 percent work in photography, 24 percent in live events, 11 percent in fine arts, 11 percent in restaurants, 8 percent in nightlife and 6 percent in journalism (the survey allowed recipients to check off multiple industries).

The New York flagship organization is currently run by about 20 volunteers who work, collectively, every day of the week (and some weekends), communicating on Slack. Some support the organization from home by doing outreach, handling social media posts or gathering donations from local organizations. For her part, founder Olaguera has been getting in touch with freelancer groups on social media in order to spread the word about the project and gain financial support: “I had originally set a goal for $1,000 and now we’re at over $16,000 at our GoFundMe,” she says. Jacqueline Patchen, a production coordinator and the organization’s community partnership liaison, has helped to forge ties with Home Depot (which provides the initiative’s boxes), Ace Endico, Red Hook Terminals, Tortilleria Chinantla and Grupo Bimbo (which donate food), and is constantly looking for more business partners.

She’s also connected with other aid organizations to supply them with Feed the Freelancers’ overstock. “When you request 100 of something, it’s not in items, it’s in cases. So that was fun,” Patchen says, recalling receiving 100 cases of pineapples during a recent shipment round. 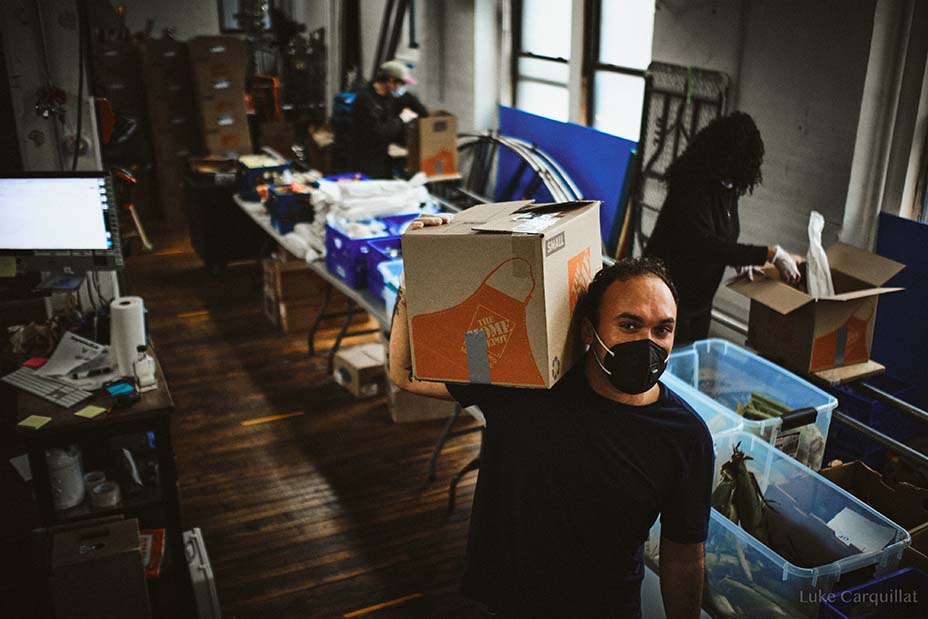 Others are chipping in by packing and moving boxes in the group’s warehouse. Lightbulb Grip & Electric Co.’s Richlin and his seven warehouse volunteers process shipments and pack boxes for recipients, assembly-line style, moving through an estimated 2,800 pounds of food a day. Without pallet jacks or forklifts, they’ve invented a particularly Hollywood solution to moving heavy items: Breaking down pallets and putting products into “hampers,” the massive tubs on wheels that film productions sometimes use to cart materials. While the composition of the group’s grocery delivery boxes differs each week, generally they contain pasta, rice, Italian bread and tortillas; fresh produce including fruits, vegetables and legumes; canned goods like tomato paste and stock; toilet paper and paper towels; and a card filled with recipe ideas (the organization’s Instagram stories also feature recipe videos demonstrating ways to use the box). Boxes can be customized as gluten-free, vegan, vegetarian or pescatarian. With transportation and drivers provided by another industry relief organization, Film & Entertainment Emergency Logistics, volunteers perform contact-less deliveries every Friday.

Ensuring everyone in his warehouse is changing gloves regularly and social distancing while assembling and moving boxes, Richlin says, constitutes at least one-third of his new gig on preparation and distribution days. “In theory, we could produce a lot more boxes and work a lot faster if we had more people, but we’ve had to make the decision to slow down down the process a little bit by having less people in more careful spaces” due to the pandemic, he says. Ultimately, however, group leaders say organizations they work with are surprised by how fast-moving and productive their initiative is — which the group attributes to their training in entertainment. “We are very, very used to ‘I need it, I need it now and I needed it yesterday,'” Patchen says. “We’ve been programmed to adapt on a dime and that’s just what we’re doing.”

Olaguera adds, “We’re used to actively adapting to our environment, and this is just another environment we’re adapting to. In many ways, a film crew is the ideal group of people to problem-solve during a pandemic or a disaster relief response.” 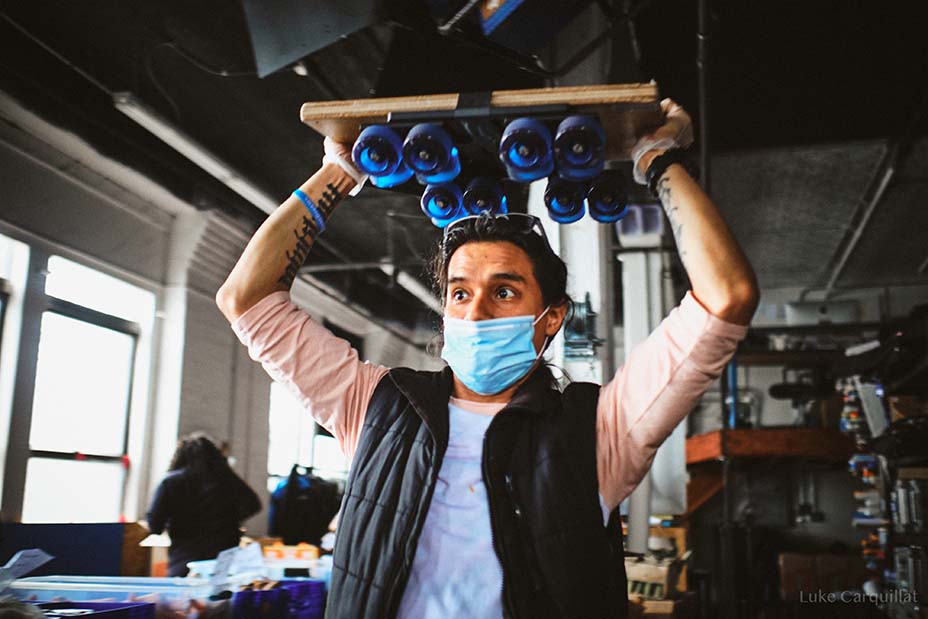 Entertainment workers’ rigor is one of the reasons organizers have reached out to gear rental houses as they’ve begun to set up Feed the Freelancer locations in other states. (Philadelphia’s recently launched outpost is based at Resolution Rentals.) However, film studios and manufacturing distribution facilities also have the floor space and docks that are necessary for the operation, Richlin says. Brooklyn’s flagship location has created a process manual to send to outposts so that other locations can become operational in “two weeks,” Olaguera says.

If organizers have their way, these locations won’t shutter by the time social distancing measures ease and freelancers start to pick up gigs once more. The organization is seeking 501(c)3 nonprofit status to apply for larger grants and federal funding, and the founder envisions keeping the organization running during future disasters and the regular periods of season unemployment that some freelancers — especially those in entertainment in New York during the winter months — face. “Even if COVID-19 passes and the industry comes back up and running in the next few months, people won’t have their savings anymore and they will be in just as much need in the winter months as they were now,” she says.

Of course, many of the volunteers behind Feed the Freelancers are themselves freelancers and/or experiencing unemployment or work shortages at this time as well. Richlin, whose business largely closed shop as entertainment productions shut down and has friends receiving the boxes he helps pack, says that his unpaid stint in learning the ins and outs of wholesale delivery has been “fascinating and frustrating in the same breath.” It’s also been therapeutic: “I’m much happier having something to do and feeling like I’m producing a product and being useful to the community than sitting at home,” he says. “It’s an emotional support thing for us to be feeling useful as a way to get through this.” 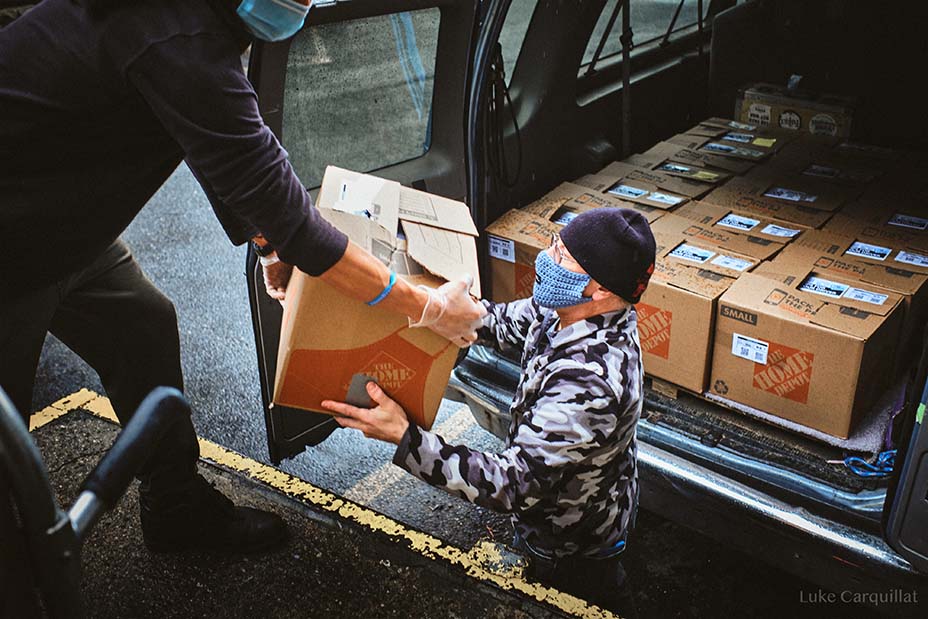