Louise Goffin knows something about songwriting factories, being the child of two legendary Brill Building songsmiths. But on Grammy weekend, she was taking part in a different kind of musical production line, as about 80 teenage girls cranked out lyrics in a conference room at The Huntington in San Marino, Calif.

Sitting under a balloon that marked her as one of 13 professional singer/songwriters who would put music to and perform some of the girls’ songs, Goffin hunkered down with one aspirant after another, helping them figure out which lines from their sometimes epic lyric sheets might make for a chorus.

The Saturday afternoon event is an annual highlight for WriteGirl, a charitable organization that puts on monthly mentoring workshops to help teen girls who come from disadvantaged backgrounds and underserved communities find their voices. Although most of their programs fly under or away from the showbiz radar, a Hollywood connection comes into play when WriteGirl hooks the girls up with professional songwriters at this event, and again when they meet with screenwriters and have their work performed by actors at the Linwood Dunn Theater in Hollywood each May.

“Last call!” yelled an organizer, collecting paperwork from the scribbling assembled. Each of the pros was handed a few sets of lyrics, from which they’d pick two to improvise a melody for in front of a theater full of teens, parents and guests. The girls whose work was spontaneously picked got an instant co-writing credit with the likes of Lindy Robbins, a well-known figure in the Los Angeles writing community who co-authored Demi Lovato’s “Skyscraper” and Selena Gomez’s “A Year Without Rain,” and Kay Hanley, familiar to 1990s alt-rock fans as the frontwoman of the Boston-based Letters to Cleo.

“You guys know this is Grammy weekend, right?” said Deanna Dellacioppa, who has served as a background singer for Nick Jonas and Justin Bieber, kicking off the performances. “And there are really fun parties and fun things to do, and I have to tell you guys something: Being here with all of you is more important than any party I could go to.”

Boy trouble figured into several of the songs, like this one sung by Heidi Rojas (who has had a No. 1 hit in the U.K. with the girl group Little Mix): “I hope you get gum in your hair and can’t get it out/Hope you forget your pencil while taking a test, baby.” But some pieces reflected other kinds of challenges. Goffin sang an immediately haunting song called “Betraying the Carnival,” the enigmatic metaphors of which became clearer as Goffin subsequently read a note that the writer, a girl named Anna, put atop the lyric sheet: “I’m bipolar, and the song is about the struggle to separate my life from the chaos of the mood swings.”

The protest-song genre also was represented. Hanley’s first pick was a song with the lines, “Mr. President, we’re here to stay/You won’t make us go away…/We’re not illegal/We want to be equal.” Later, she and a budding writer named Isabelle got the afternoon’s biggest laugh with another address to Donald Trump: “A million women marched to heal our pain/A million women marched because you’re insane…/My rights are not a game/So don’t stab me in the back/With your alternative facts/I’m just gonna resist, relent, repeat.”

Hanley, who has gone from alt-rock heroine to co-writing all the songs for the Disney Channel series Doc McStuffins with partner Michelle Lewis, also a WriteGirl participant, looks forward to this event all year. “It’s our job to harness the avalanche of words and help the girls streamline their ideas into lyrics,” she says. “At the end, when we put the lyrics to chords and melodies, literally making up songs on the fly, it’s pretty terrifying, because I want all my songs to be perfect. I always have to remember that the biggest cheers and laughs come when we f— up, stumble or have a trainwreck.” 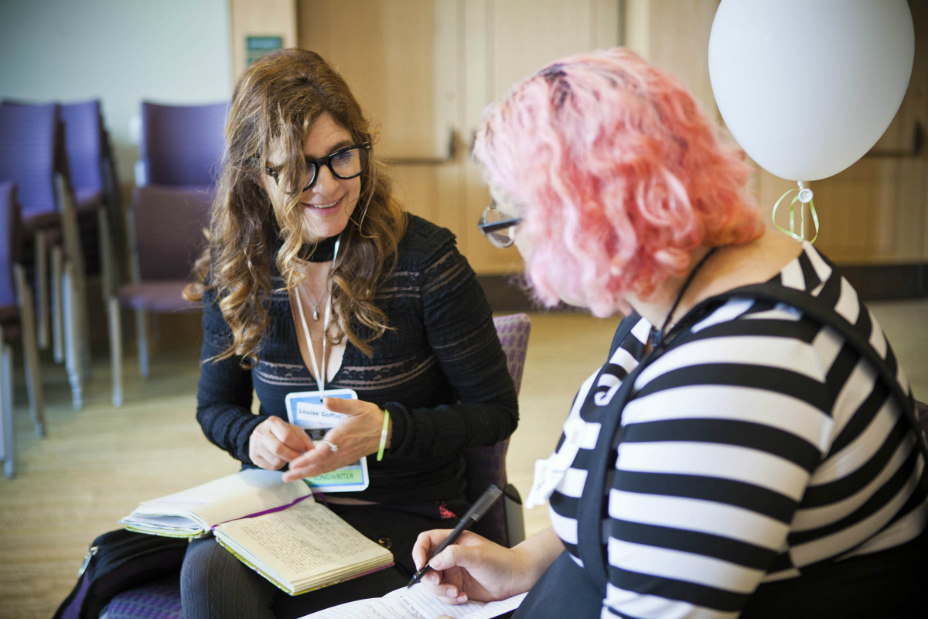 “We have a network of teachers and counselors that send girls to us, and we try to be as inclusive as possible,” says executive director Keren Taylor. “We continue to serve mostly Latina girls, and girls from low-income families and high-density schools. But we try to keep our doors open and let girls [from less disadvantaged backgrounds] be part of this if they want to, too. It’s great, that they have a chance to mix. A girl from the Westside meeting a girl from East L.A., that’s a rare confluence of things. And when you scratch beneath the surface of a girl, there are issues there that are just not apparent, even for girls from more affluent families.”

Taylor, who started the organization in 2001, has gotten awards from the Obama-era White House and Schwarzenegger-era state of California along the way. “We’re proud of the statistic that we send 100 percent of our girls off to college,” she says. “Then to see them graduate from college wanting to give back to the community because they were mentored by us is a much grander thing coming out of this than I ever intended. It was supposed to be some fun writing workshops, and it’s turned into really a life-changing experience for hundreds of girls every year.”

Malena Ruth, a guardian, has been driving two girls in her charge to the group from Ojai every month for the last year, after seeing a flyer for WriteGirl at a bookstore in Silver Lake. Her teenagers suffered from something more extreme than routine bullying: Living in Tanzania with the condition of albinism, after losing their parents, they were hunted by locals who believe that hacking the limbs of such a person confers magical powers, and the girls came to America so one of them could get a prosthetic leg after just such an attack.

“WriteGirl has been a phenomenal outlet in terms of expressing themselves, dealing with the stigma they were put through in their country,” says Ruth, “and understanding they have a voice, they can speak for themselves and be who they want to be. When they arrived in L.A., they would walk with their heads down and not look at you or ask questions. But today Tindy writes and sings her own songs, and Bibiana [who lost her leg and two fingers] is more into writing fiction stories about her childhood.” 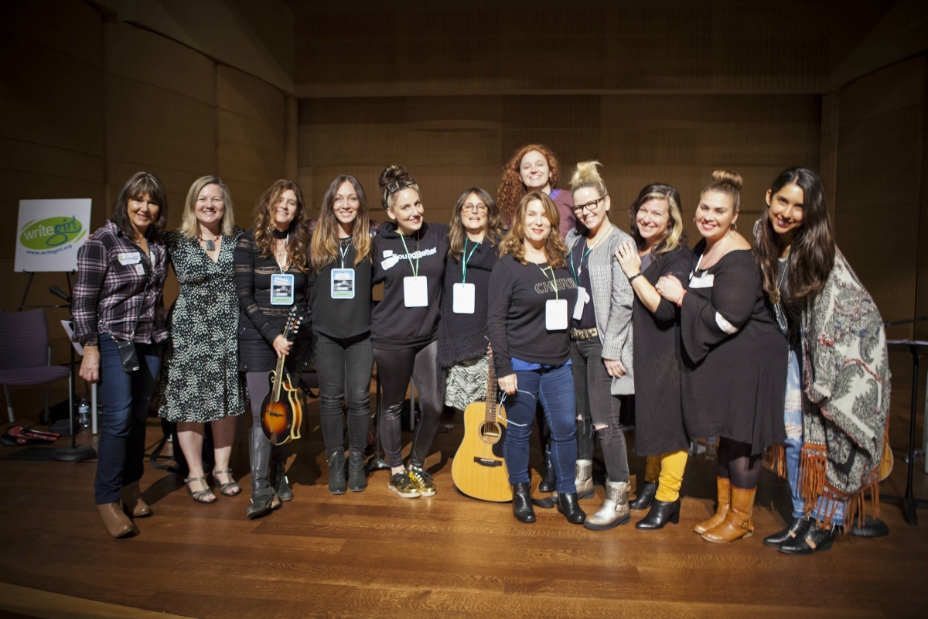 WriteGirl’s mentors encourage technique as well as pure self-expression. “I already knew what songwriting was,” said Kaiya, a teenager taking part in the program, “but it was fun because they taught us things like what hard rhymes and soft rhymes are, and how that can affect your writing.”

Goffin was taking part for her fourth year. “Socially, it’s always great to see sister songwriters,” she says. “But meeting with the girls and doing the mentoring, their pages are filled with the greatest lines. They’re usually not structured, but I’m always amazed how much there is on the page. I wish I could have that much on my page before I write a song, because editing is easy. I get really inspired.”

This year, WriteGirl is adding a program on advocacy, blogging and advertising, set to take place next month at the branding agency 72andSunny in Playa Vista. The annual screenwriting workshop will take place May 20 in partnership with AMPAS at the Linwood Dunn, culminating in a ticketed program in which actors like Wayne Brady, Keiko Agena and Wendi McLendon-Covey will perform the freshly minted monologues and dialogue scenes the girls have worked on in the theater’s hallways, lobby and dressing rooms.