Around the time they were married in a private civil ceremony in 2018, Justin Bieber and Hailey Baldwin reportedly shelled out almost $100,000 per month to rent a stylized lakefront home in the Hollywood-favored Toluca Lake neighborhood. The music phenom and the supermodel have since bought a $25.8 million mansion in the illustrious Beverly Park enclave, and the Toluca Lake residence for which they once paid so dearly, originally listed in 2019 at almost $8.5 million, has been sold for its full and final asking price of $7.25 million to powerhouse television writer-producer Kenya Barris, creator of the hit sitcom Black-ish, and anesthesiologist Rania “Rainbow” Edwards-Barris.

Originally built in 2000, and completely rebuilt in recent years, the three-story home is hidden among lush plantings on more than one-third of an acre with five bedrooms and 6.5 deluxe bathrooms in about 6,500 square feet. The exterior of the white stucco and clay tile roofed Mediterranean villa, described in marketing materials as a “Spanish Contemporary oasis,” belies luxuriously appointed and rigorously contemporary interiors that adhere to a strict black-and-white color scheme with molding-free cotton-white walls and lustrous inky-black hardwood flooring.

A double-height rotunda entry dominated by a sweeping staircase leads to formal living and dining rooms, while a great room comprises a family room with a minimalist fireplace, a dining space that spills out to the backyard and an all-white chef-quality kitchen with premium-grade culinary accoutrement. 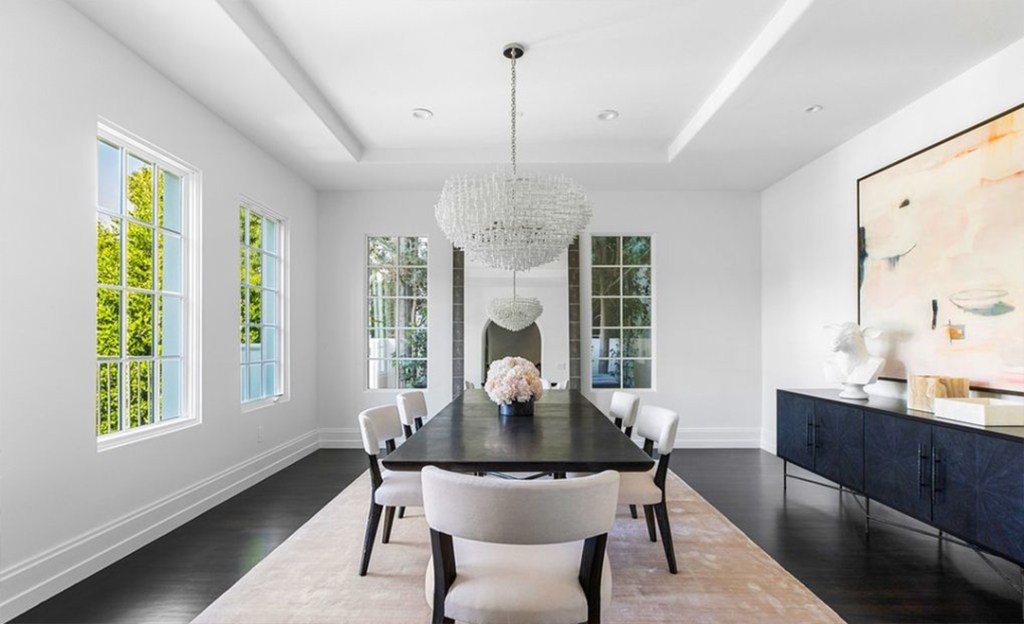 An en-suite main floor bedroom has French doors to the backyard, and the second-floor homeowner’s retreat shares a lake-view terrace with another of the guest bedrooms and offers a wall of picture windows with a wide view across the tiny lake. A subterranean level contains not only a vast garage capable of accommodating six cars, but also a gym with steam shower and a state-of-the-art recording studio. And, beyond a sheltered dining terrace, palm trees surround a lagoon-style infinity-edge swimming pool perched above the bulk-headed shoreline.

The listing was held by Carl Gambino of Compass, while the Barrises were represented in the deal by Shavonda Hill at Re/Max One.

Though the Toluca Lake purchase comes at the same time the long-married Barrises, who have six kids and reconciled last year after Barris filed for divorce, sold their starter home in the up-and-coming Valley Village area for $1.314 million, a small but notable amount over the $1.25 million asking price, they still own at least three other multimillion-dollar homes across the San Fernando Valley: a 4,500-square-foot home in Encino they bought in the fall of 2017 for close to $2.95 million; a 9,600-square-foot contemporary, also in Encino, acquired over the summer of 2019 for $7.55 million and used as the model for the family home featured in the Barris’ acerbic and semiautobiographical Netflix series #BlackAF; and a spacious if otherwise fairly unassuming 6,300-square-foot house in the coveted Colfax Meadows neighborhood in Studio City that was scooped up last year for $4.6 million.