Having upgraded a couple of years ago to a gated, multi-structure compound in trendy Venice Beach, Los Angeles, it’s not too much of a surprise that publicity eschewing two-time Oscar-nominated Australian actor Margot Robbie, one of Hollywood’s highest-paid actresses, and English filmmaker Tom Ackerley have put their former home in L.A.’s hoity-toity Hancock Park neighborhood on the market at almost $3.5 million.

The couple, who met in 2013 on the set of Suite Francaise and moved from London to Los Angeles shortly after their under-the-radar late 2016 marriage, picked up the then brand-spanking-new residence in early 2017 for $2.725 million. Completely invisible behind a high wall, secured gates and a towering hedgerow on a pretty tree-lined street, the not-quite-3,400-square-foot two-story transitional traditional — marketing materials describe it as “Soho inspired” with four bedrooms and 4.5 bathroom plus a poolside bath — features wide-plank European oak floorboards, designer tile and whole-house audio, along with a camera-equipped security system, a wine cellar nipped under the stairs and, unusually but cleverly, a private pet room with separate outside entrance.

High-ceilinged and light-filled living spaces flow easily into one another and include a combination foyer/formal living room with massive polished marble fireplace and a formal dining room painted a chic shade of charcoal. Arranged around a huge island with a Carrara marble sink and a six-seat snack counter, the high-end gourmet kitchen steps down to a family room furnished with a round sofa and a swing hung from the coffered ceiling next to another polished marble fireplace. Full-height steel and glass doors open the room to the garden.

In addition to a main-floor bedroom and bathroom perfect as a guest room, nanny quarters or home office, there are two en-suite guest bedrooms on the upper floor as well as a snazzily tiled laundry room and a principal bedroom replete with slender private balcony, marble bath and fitted walk-in closet. 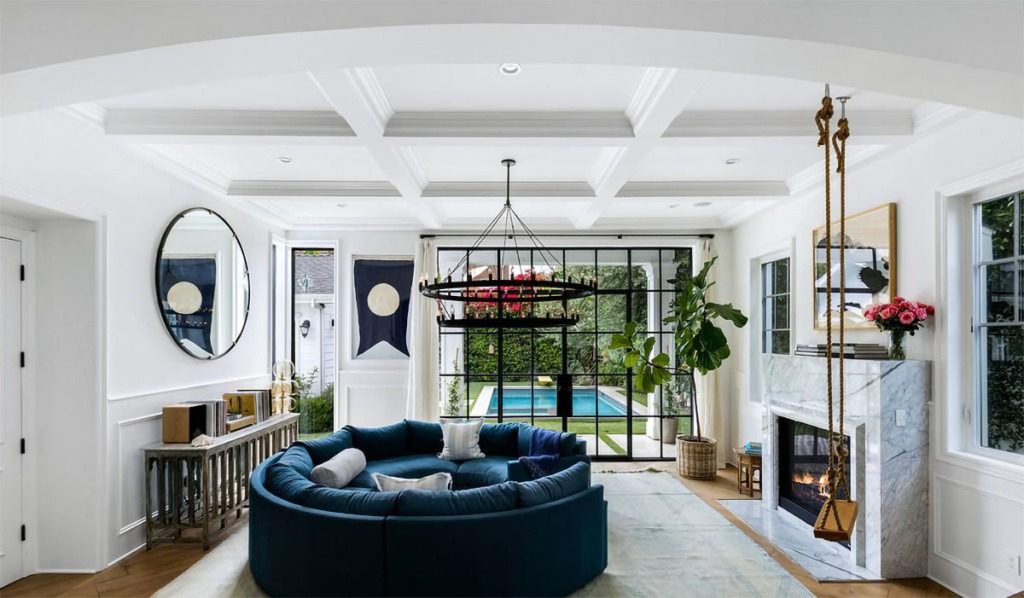 The 0.15-acre parcel doesn’t allow for an especially large backyard, but it nonetheless packs in a plethora of recreation and leisure options. The detached two-car garage has been converted to an open-air cabana alongside the swimming pool and spa and a small patio behind the cabana has a tile-accented bar and a convenient pool bath.

The listing is jointly held by Sam Real and Justin Fierro of the Sam Real Group at Engel & Völkers in Beverly Hills.

Robbie and Ackerley’s Venice compound was purchased almost exactly two years ago in a clandestine off-market deal valued at exactly $5 million, and earlier this year they took in $1.175 million — its full asking price — on the sale of a petite bungalow in the Hollywood Hills, a picayune profit on the $950,000 they’d paid Dustin Lance Black about three years earlier.

Ackerley’s career has been on a significant upswing since he was listed as a producer on the 2017 biopic I, Tonya, for which Robbie was nominated for her first Academy Award. The Suicide Squad and Birds of Prey star was nominated for a second Oscar for her supporting role in the 2019 biopic Bombshell, and her numerous upcoming projects include another turn as Harley Quinn in The Suicide Squad as well as the forthcoming Greta Gerwig and Noah Baumbach written live-action feature Barbie, which she and Ackerley will also produce via their production company LuckyChap.