After a long slog on the market, tax records reveal Matt Damon has finally succeeded in offloading his erstwhile home in Los Angeles. Now living primarily in New York City with his family — back in 2018, he dropped a record $16.7 million on a townhouse in trendy Brooklyn Heights — the Bourne franchise and Ocean’s trilogy star no longer had need for his West Coast outpost, which sits in the coveted Riviera pocket of L.A.’s seaside Pacific Palisades.

Damon first put the house up for sale nearly a year ago, initially asking $21 million. With no takers, the asking price was soon slashed to $17.9 million before a buyer stepped up to the plate. The sale has now finally closed off-market for exactly $18 million, and the spendy new owners are Richard and Ann Sarnoff — he’s a managing director at KKR, one of the world’s largest private equity firms; she’s a high-profile media executive, the current and first female CEO of Warner Bros. (Damon and his longtime wife Luciana Barroso acquired the property nearly a decade ago, paying $15 million.)

Sitting on a prime corner lot that spans more than a half-acre, the house itself is completely invisible from the street behind layers of mature hedges and trees. Behind the gates, the Hawaiian-inspired structure stands tall, with seven bedrooms and 10 baths in over 13,000 square feet of living space. Built in 2004, the KAA Design house was marketed as using “organic materials” and artisanal craftsmanship throughout. 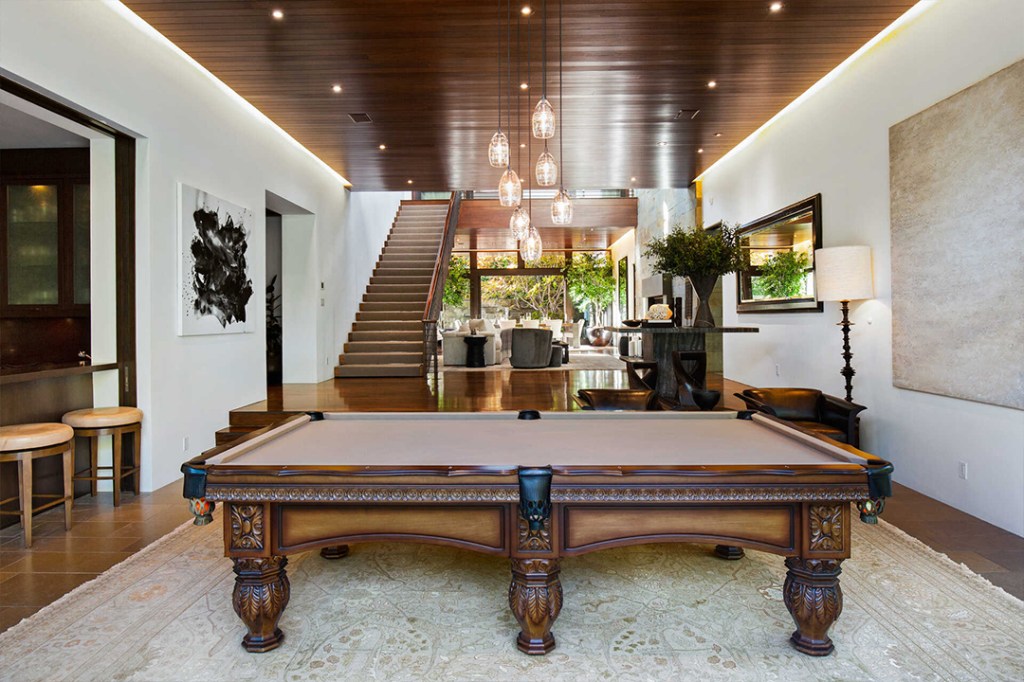 The mansion is composed of an intricate and interwoven creation of wood, stone and stucco pavilions that blend Craftsman and Southeast Asian influences with classic California modernism. Inside, a giant atrium flaunts a polished mahogany ceiling, and there are numerous areas for lounging and dining — a great room with a stone fireplace, a billiards room with a wet bar, and a media room with direct access to the gardens. The marble-and-mahogany kitchen opens to both a casual dining area and family room with floor-to-ceiling walls of glass and lush backyard views.

Downstairs, the full basement level offers a children’s playroom/den, a temperature-controlled wine cellar and fully stocked gym. Upstairs, the luxe primary suite includes a private terrace, a private massage room, stone-clad bath and dual walk-in closets, both with wall-to-wall carpeting for a cozy touch. There are also six additional bedrooms, all with ensuite bathrooms and two of them specifically earmarked for live-in staff.

Out back, the lavish grounds do a decent impersonation of a Hawaiian paradise; dense tropical plants and huge trees grow together, making the yard its own private oasis. The grassy lawn includes a built-in children’s playset, and there’s a Bali-style swimming pool adjoining an open-air pavilion for breezy outdoor dining and entertaining.