With Coming 2 America becoming the most streamed movie of the last year during its premiere weekend on Amazon Prime, one of the most talked about aspects of the film is its gorgeous, global parade of costumes by Ruth Carter. The Oscar-winning costume designer (Black Panther) has created a sumptuous cavalcade of Afro-centric outfits worn by a cast that includes Eddie Murphy, Arsenio Hall, KiKi Layne, Leslie Jones, Shari Headley, Teyana Taylor, Jermaine Fowler, Nomzamo Mbatha and Garcelle Beauvais. In a recent interview with The Hollywood Reporter, Carter described the costumes for the film as a mix of “large-scale beautiful African prints” and “gorgeous shapes.”

To create Coming 2 America’s more-than-800 costumes — including the grand pieces for the royal court of the fictional country of Zamunda — Carter created her own pieces and also worked with more than three dozen designers and brands on custom looks. A cast in itself, this array of designers is based everywhere from Nigeria (House of Deola) and South Africa (Mantsho, which did a 2019 collaboration with H&M) to India (designer JJ Valaya) and the United States. “I was all over the world on this project,” Carter told THR.

In the days surrounding the film’s release, many of the designers took to Instagram to write about their excitement and pride about working with Carter on the film. Wrote designer Laurel DeWitt on her IG, “Still on cloud nine after seeing my pieces in my first feature film.” Read on for more on the many designers featured in Coming 2 America.

The L.A.-based brand founded by Cameroon-born designer Claude Kameni has become a celebrity favorite in recent years, worn by Viola Davis at the 2021 Golden Globes Awards, Amanda Seales as host of the 2020 BET Awards, and Tracee Ellis Ross when she hosted the American Music Awards in 2018. For Coming 2 America, Kameni worked with Carter to create a monumental wedding gown in the film “with one of the largest trains I have ever seen,” director Craig Brewer told THR. 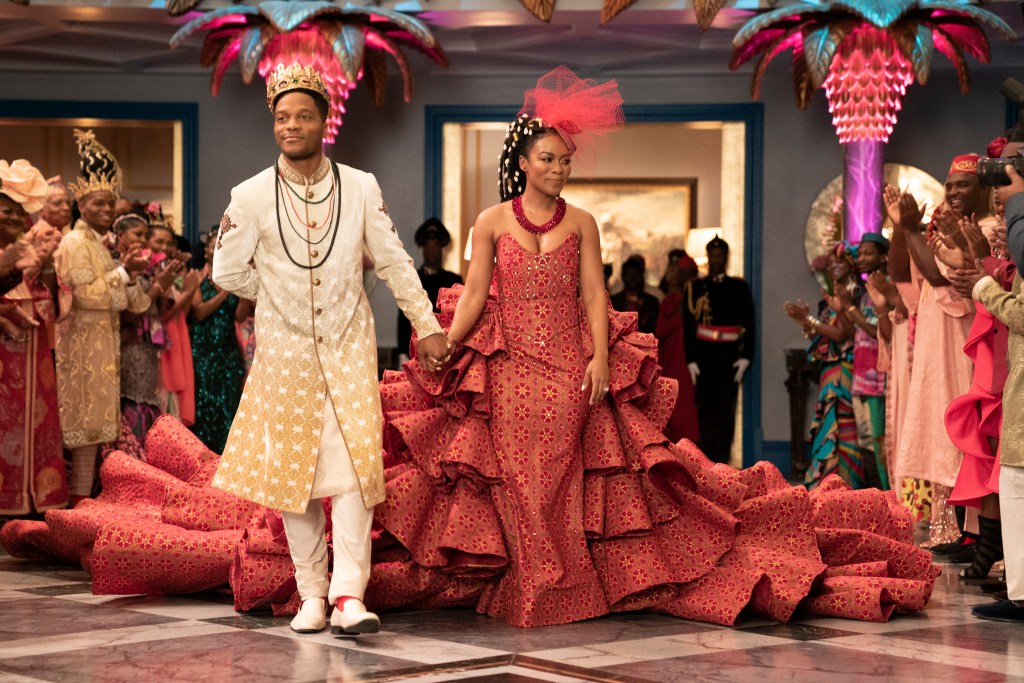 Wrote Kameni on Instagram, “Thank you @therealruthcarter for choosing me to create this dramatic over the top African print wedding gown for Coming 2 America. You pushed me to my fullest potential, and I was able to make our vision come to life. The dress weighs 83 lbs.” 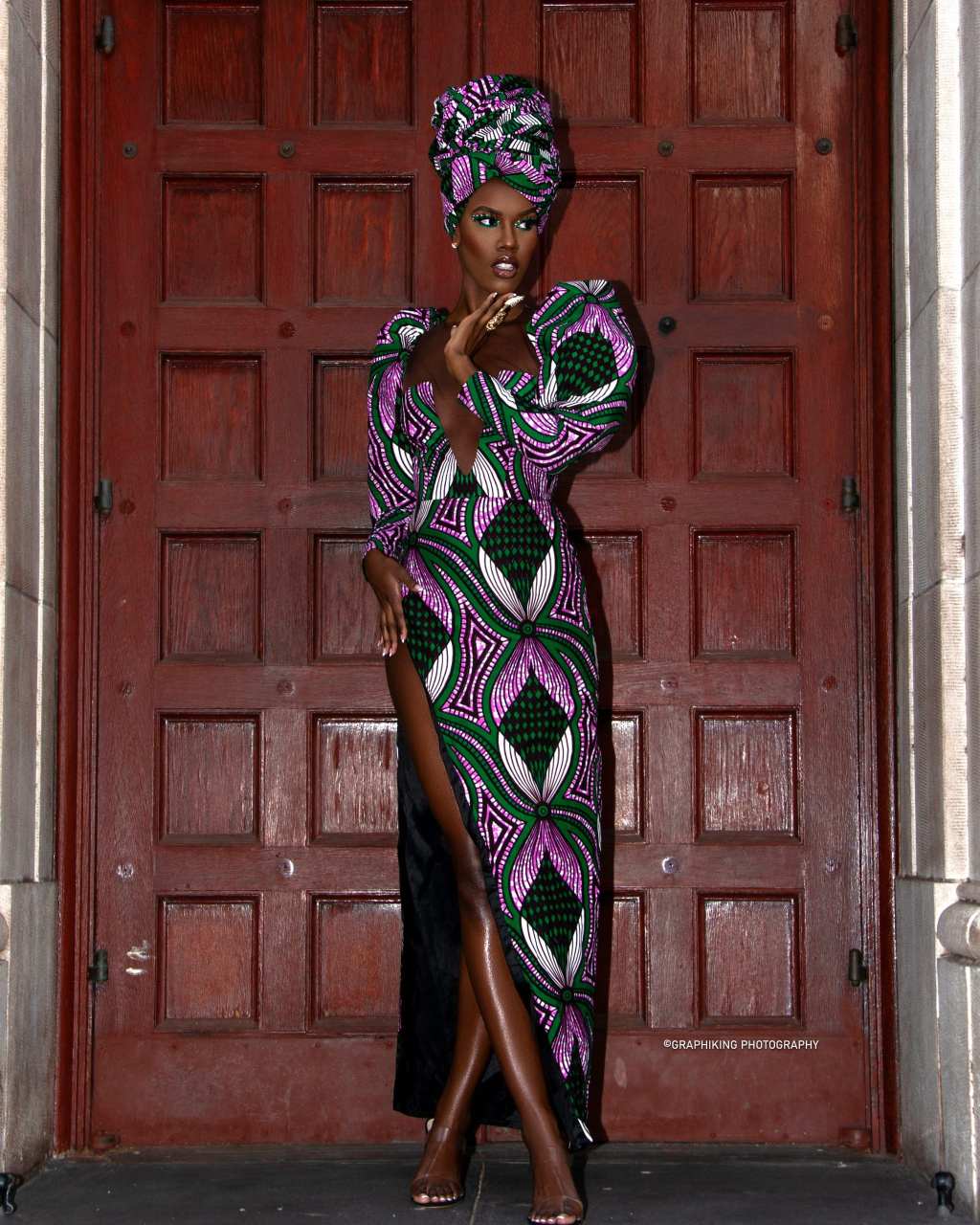 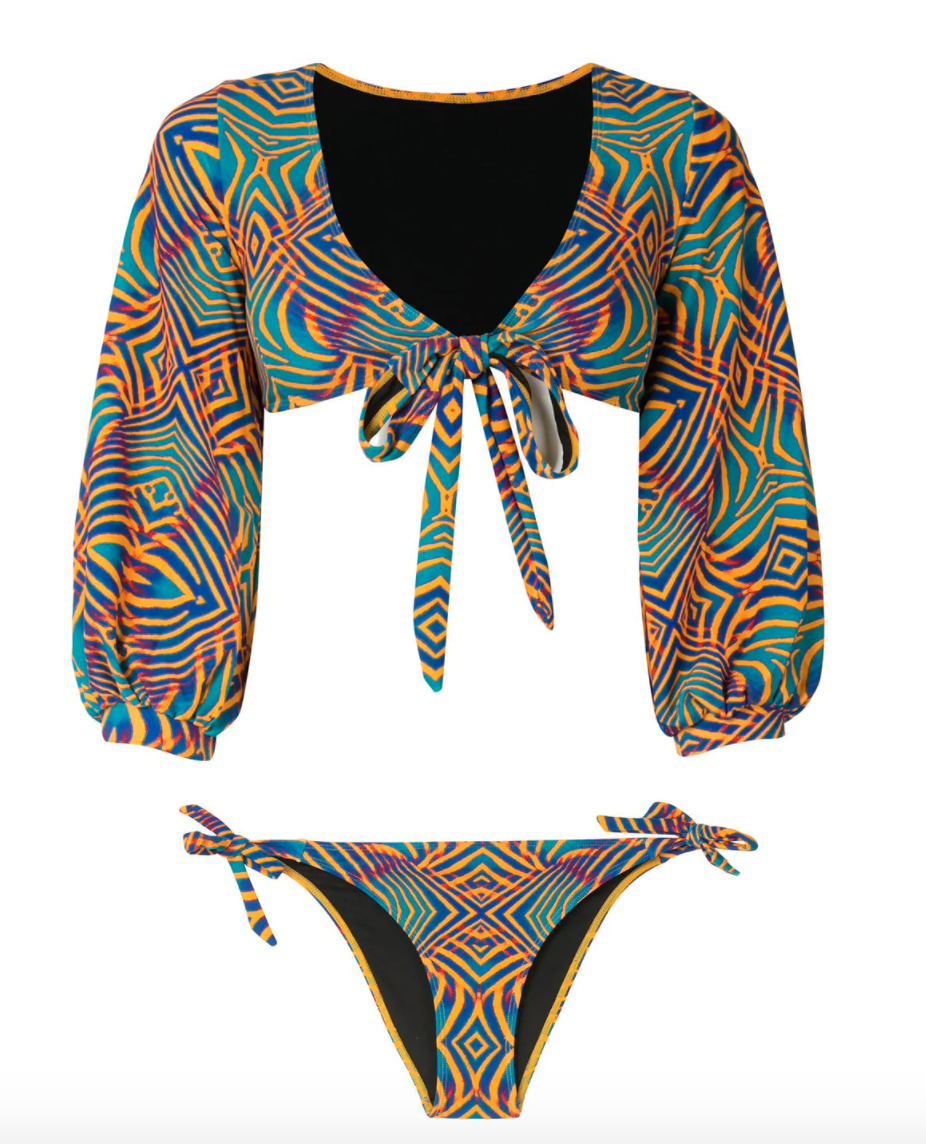 Seen on both Michelle Obama and Kamala Harris on Inauguration Day this past January, L.A.-based designer Sergio Hudson’s work pops up in Coming 2 America with a brocade gown worn by Mary (played by Leslie Jones), the mother of the son who Prince Akeem didn’t know he had. 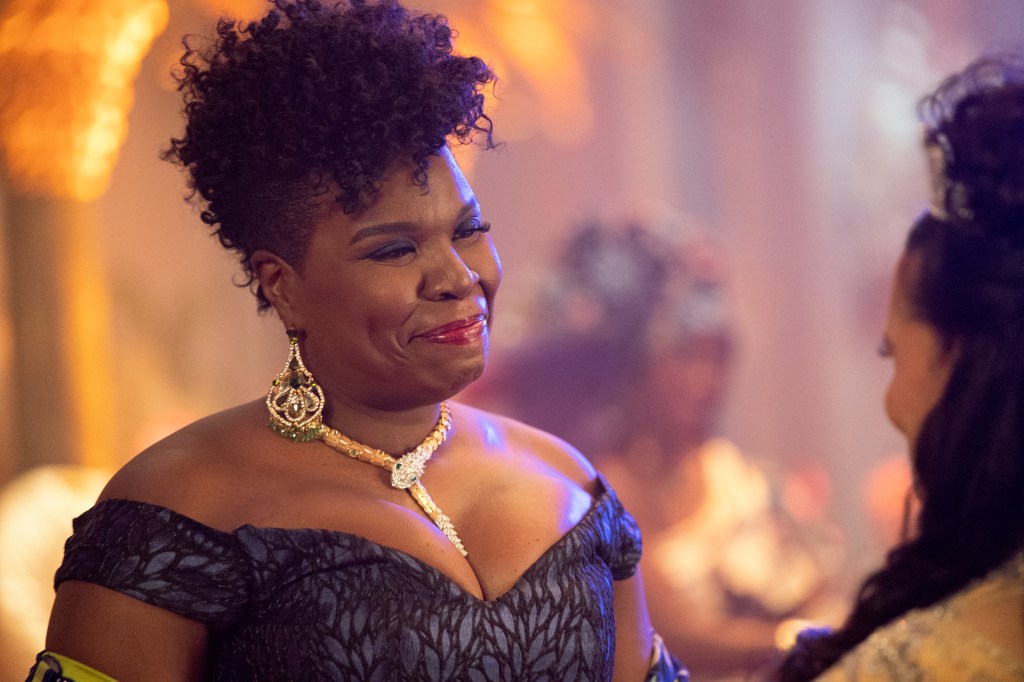 “It was an honor to make this custom dress and shawl for #coming2america with the amazing @therealruthcarter and her team. This was for @lesdogggg’s character “Mary” in the coronation scene,” wrote the designer on Instagram. Hudson is known for his glam take on American sportswear and his signature belts. 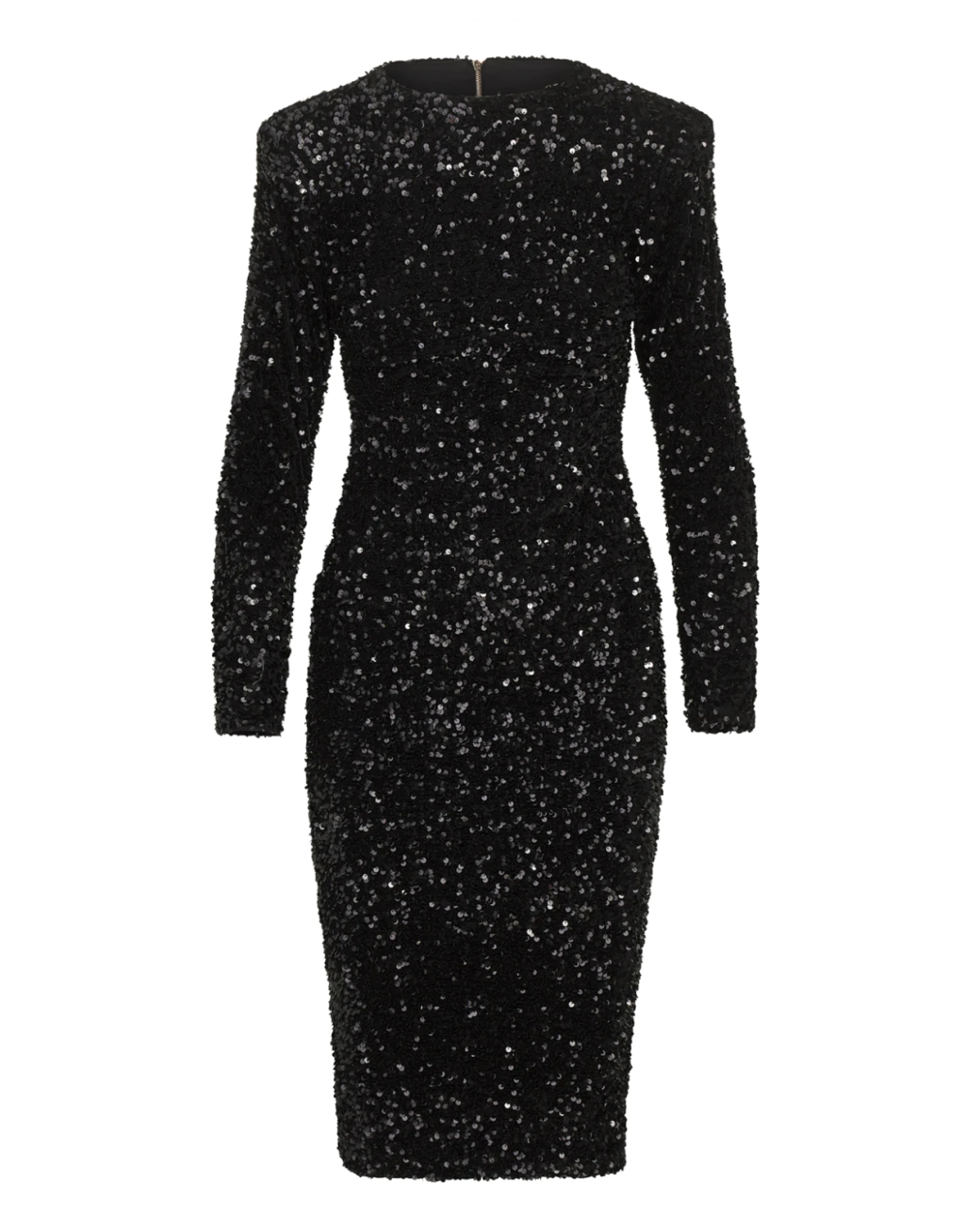 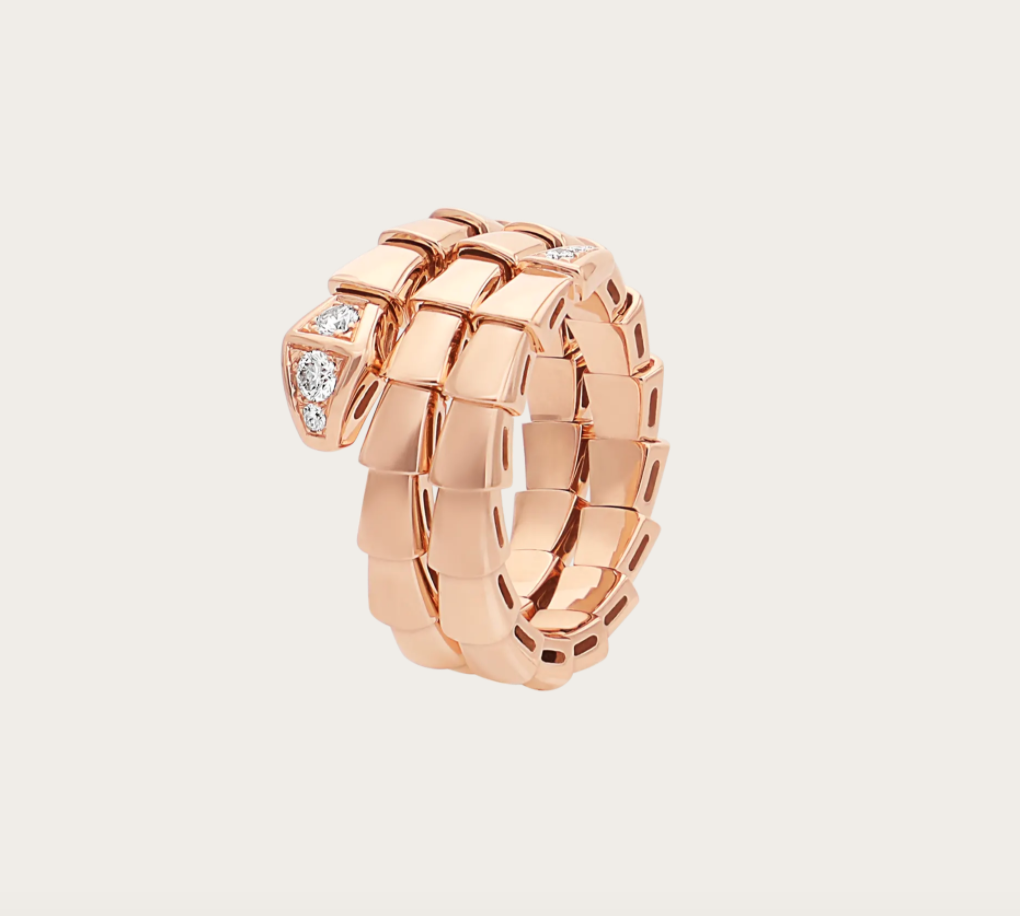 Paramount, the studio behind the film, partnered with Uoma Beauty on a limited-edition makeup collab. “It was one of those things that just came up out of the blue, and I think it was really good of Paramount really deciding that, whereas most of the times with this kind of collab they always give to non-Black-owned brands, to go, ‘No, this is a story about Africa,’” Uoma Beauty founder Sharon Chuter recently told WWD. 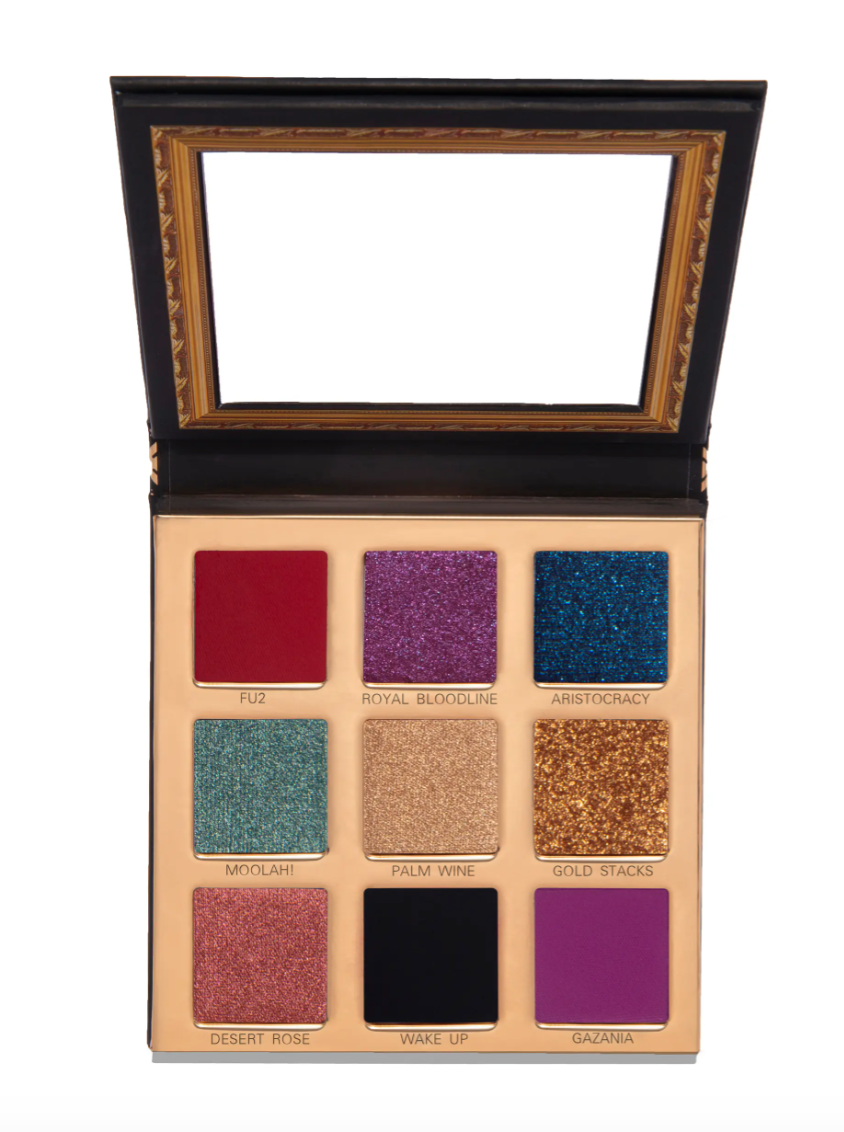 Los Angeles-based designer Laurel DeWitt has become known as the Queen of Chain and Metal, creating crowns, hats, skirts and more that have been worn by everyone from Beyonce and Lady Gaga to Shakira and Cardi B. For Coming 2 America, DeWitt made a sensational solid-metal dress for Teyana Taylor’s character, Bopoto, the daughter of General Izzi (Wesley Snipes), and also created crowns for the movie. 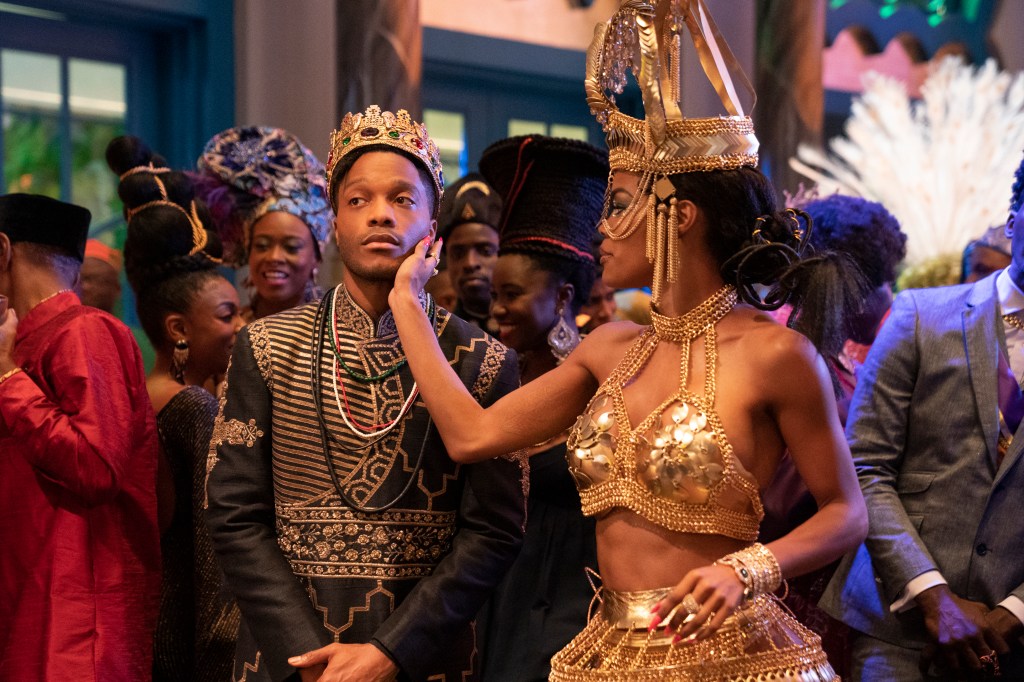 DeWitt’ss full-metal apparel runs $2,700 for a chainmail dress up to $17,000 for her handcrafted floor-length Goddess Gown. Her line also includes accessories and jewelry. 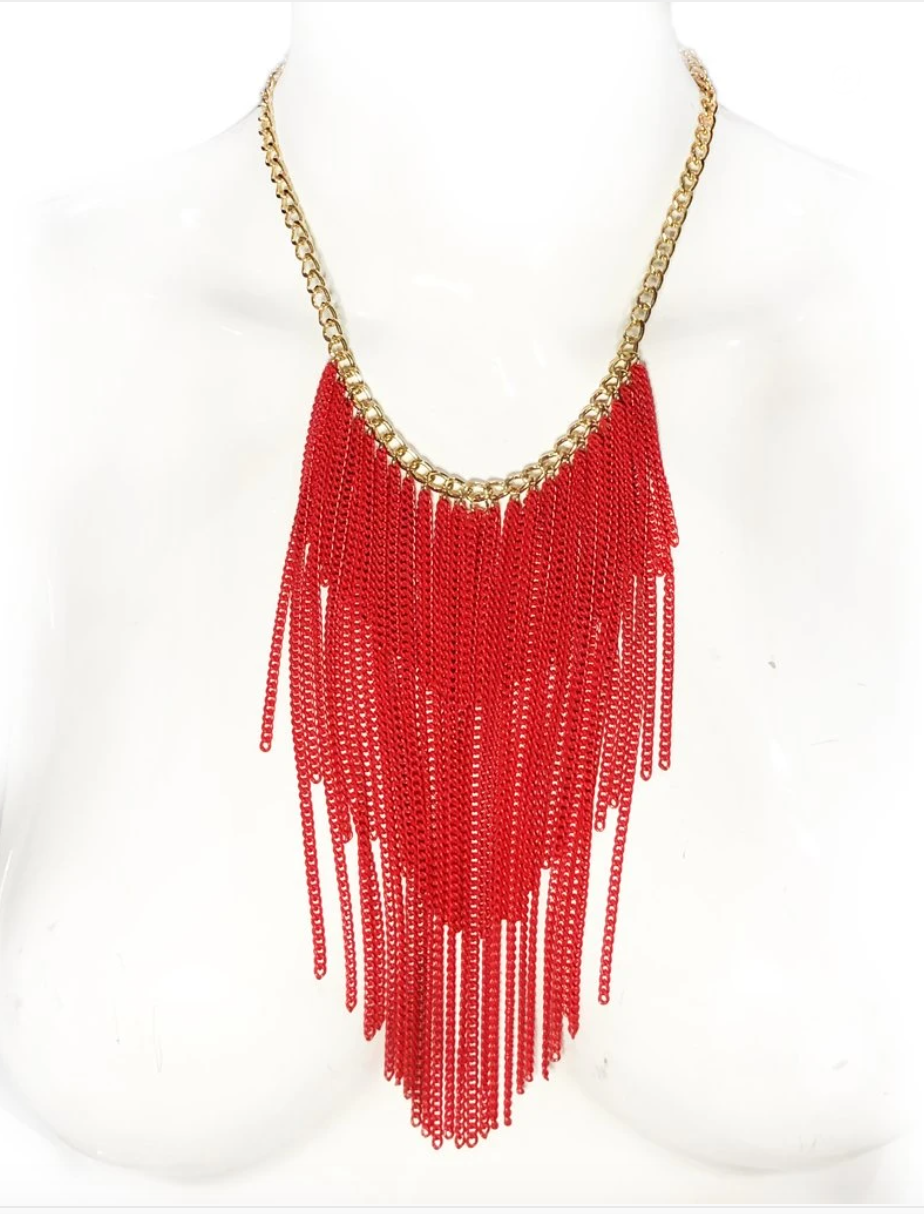 For one of Princess Meeka’s leisurewear looks, Carter turned to Brooklyn-based label Jahnkoy, founded by Siberia-born artist and designer Marusya Vadimovna Kazakova and Burkina Faso-born artist Burkindy. The label created a sporty green-and-white asymmetrical Puma halter dress made with cut-outs and accessories that include armbands that say “Democrazy.” Jahnkoy also outfitted the character of Lavelle in one scene. 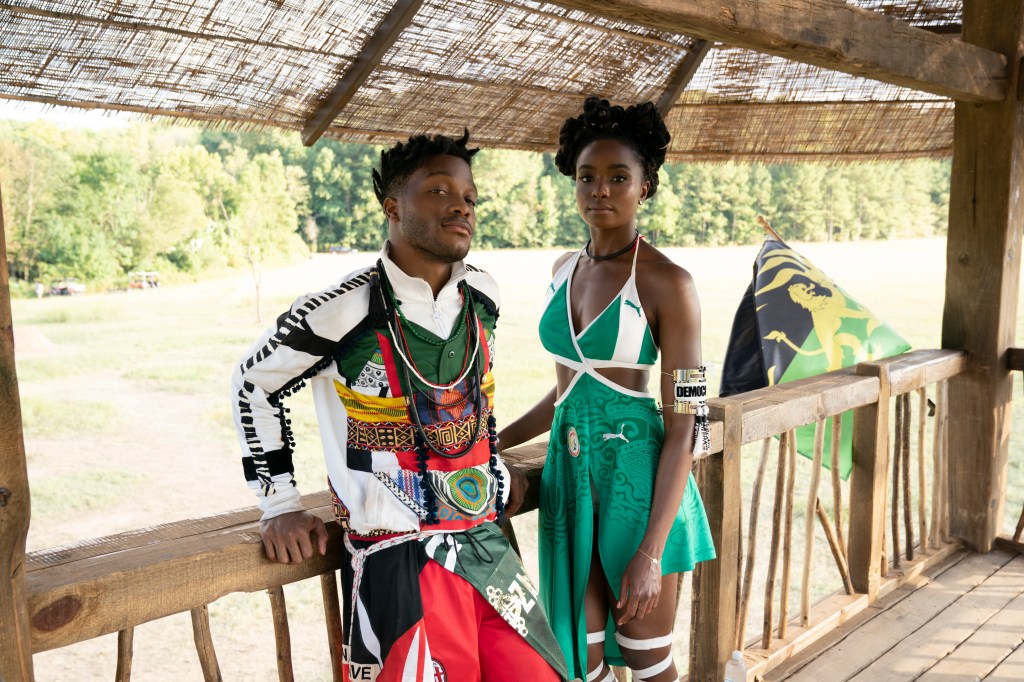 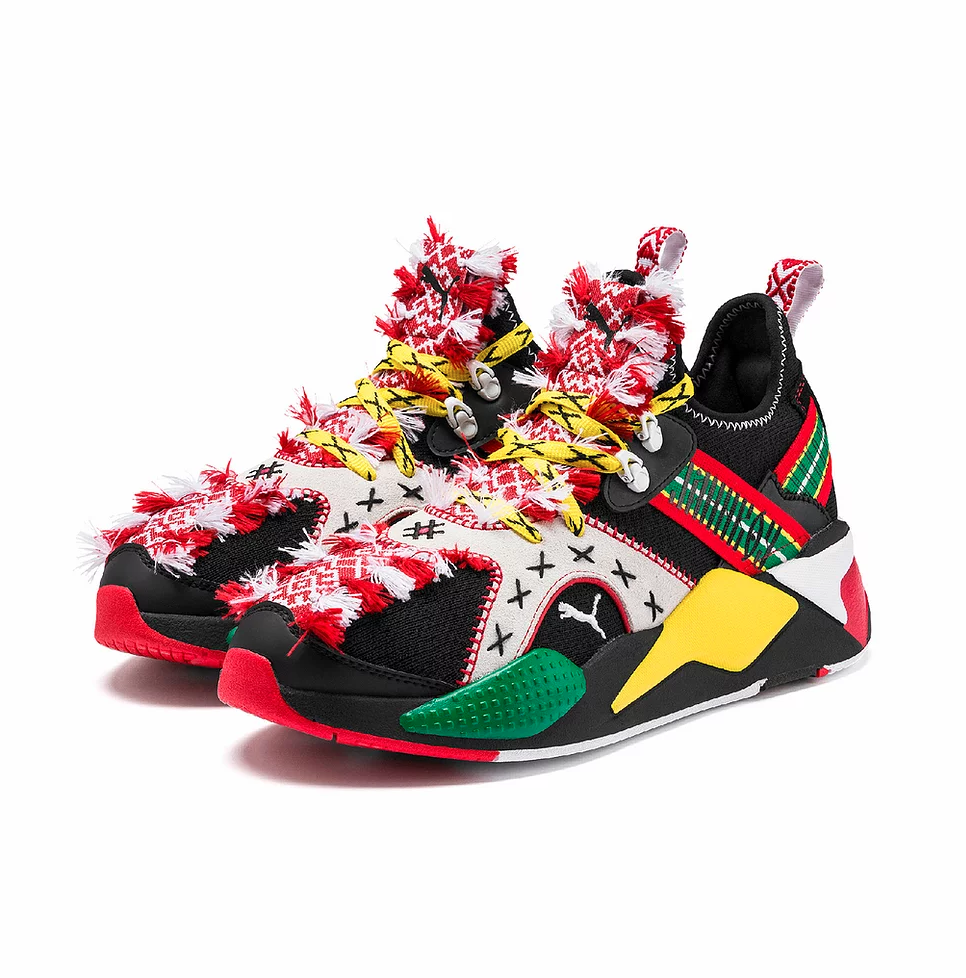 Jewelry designer’s Sewit Sium’s pieces — including her Large Scarab Ring, Abundant Fish Ring, Nefertiti Ring and Divine Nefertiti Earrings — are worn in the film by KiKi Layne (Princess Meeka). Before starting her company in 2015, Sium taught Fashion Activism and Design in high schools in New York City. “I used jewelry — the oldest form of decorative arts as an educational tool, as primary document to teach predominantly Black students about their living African lineage, the world and their place in it,” she writes on her website. 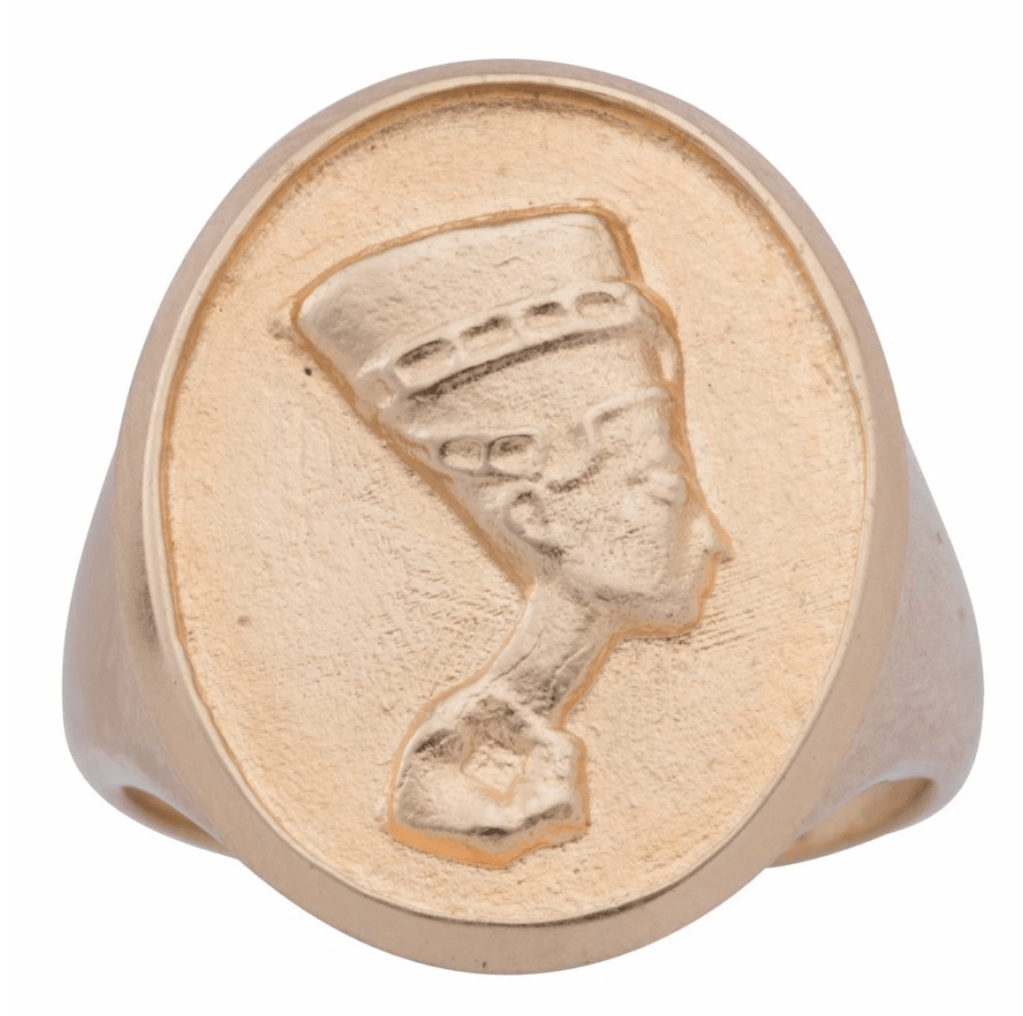 Founder Jameel Mohammed — who calls his jewelry line Khiry as an “Afrofuturist Luxury Brand” — started his company “after being pointedly told by the CEO of a preeminent luxury goods company that true luxury brands could only emerge from Paris and Milan,” he writes on his website. He adds that his creations’ “sleek forms evoke themes throughout the African diaspora.” 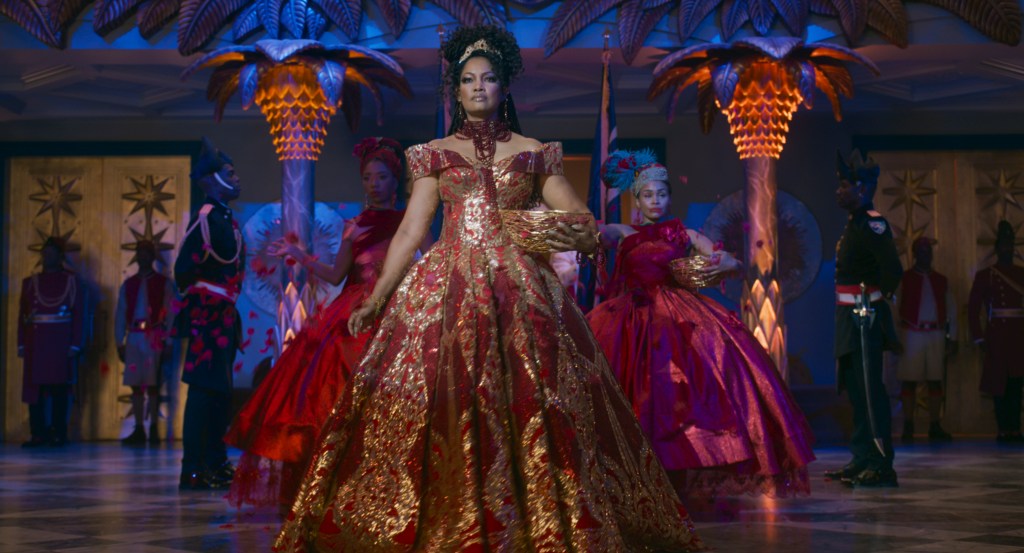 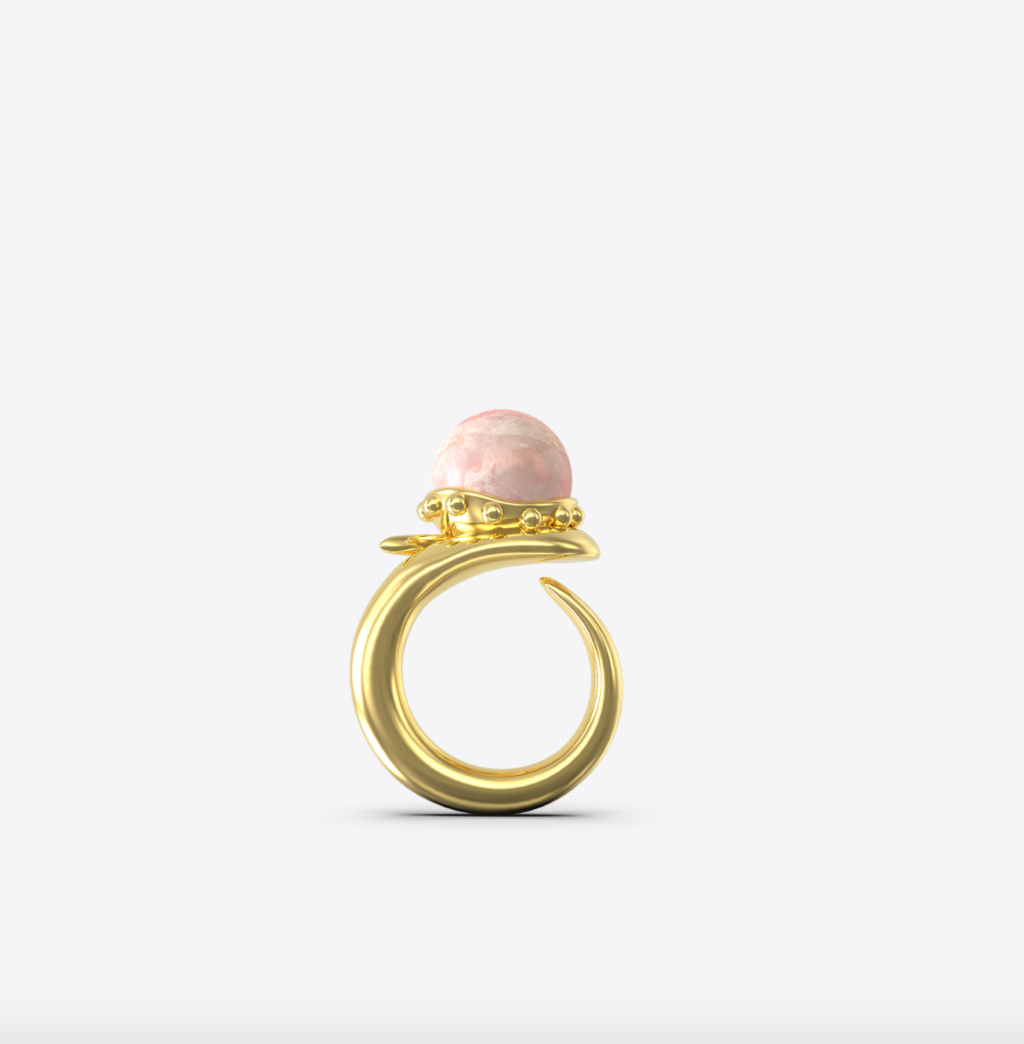 Côte D’Ivoire-based designer Loza Maléombho, who ships to the United States, teased on her Instagram this week, “Look out for @loza_maleombho selective pieces featured in #coming2america available for pre order online this week!!” In the meantime, her handmade black-and-white Abla Stripe Sandals — featuring a three-inch block heel, cotton-velvet ankle wraps and her signature 24k gold-plated mask pendants — are available via New York City boutique The Folklore, which spotlights “high-end and emerging designer brands from Africa and the diaspora.” 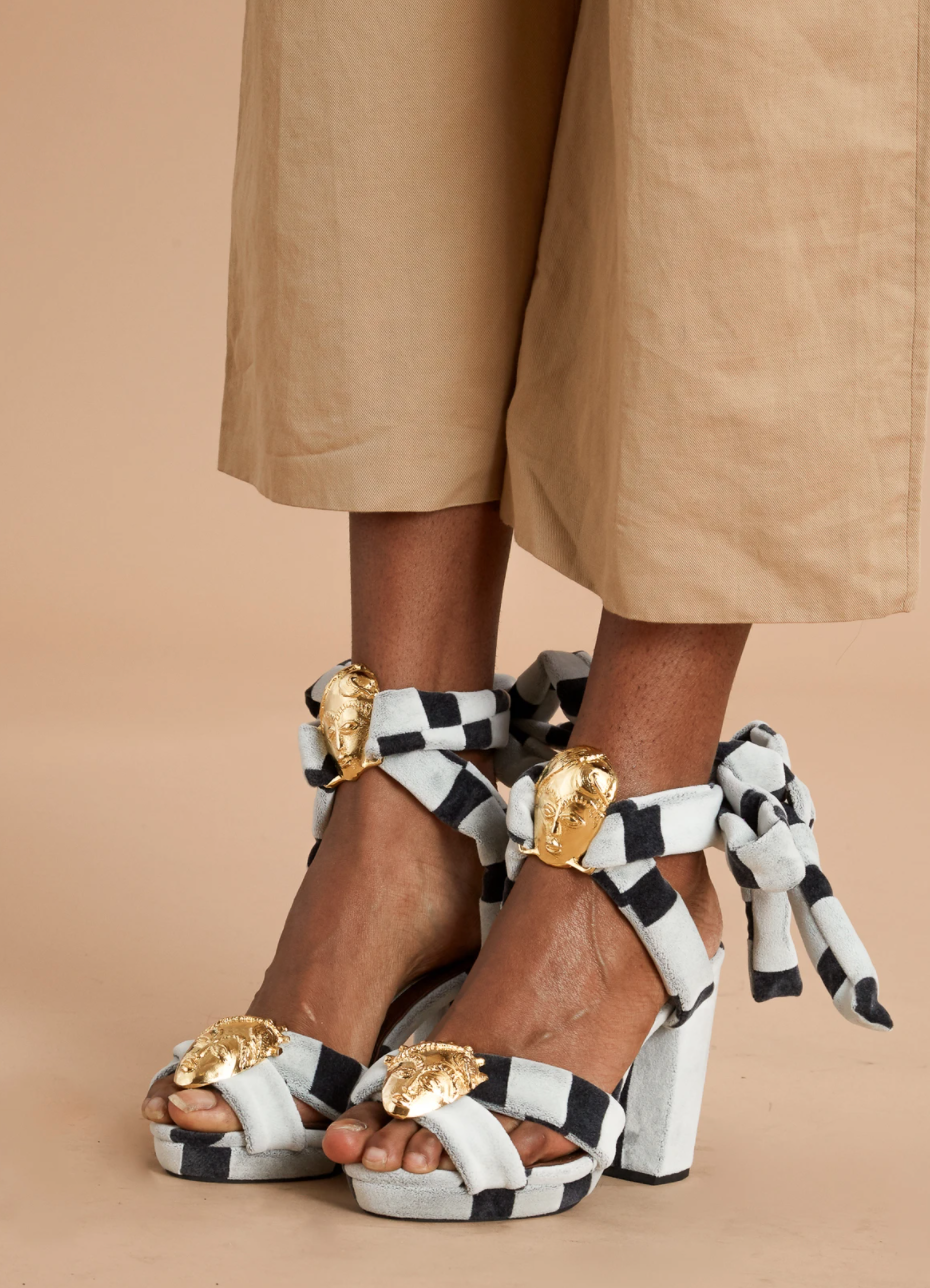 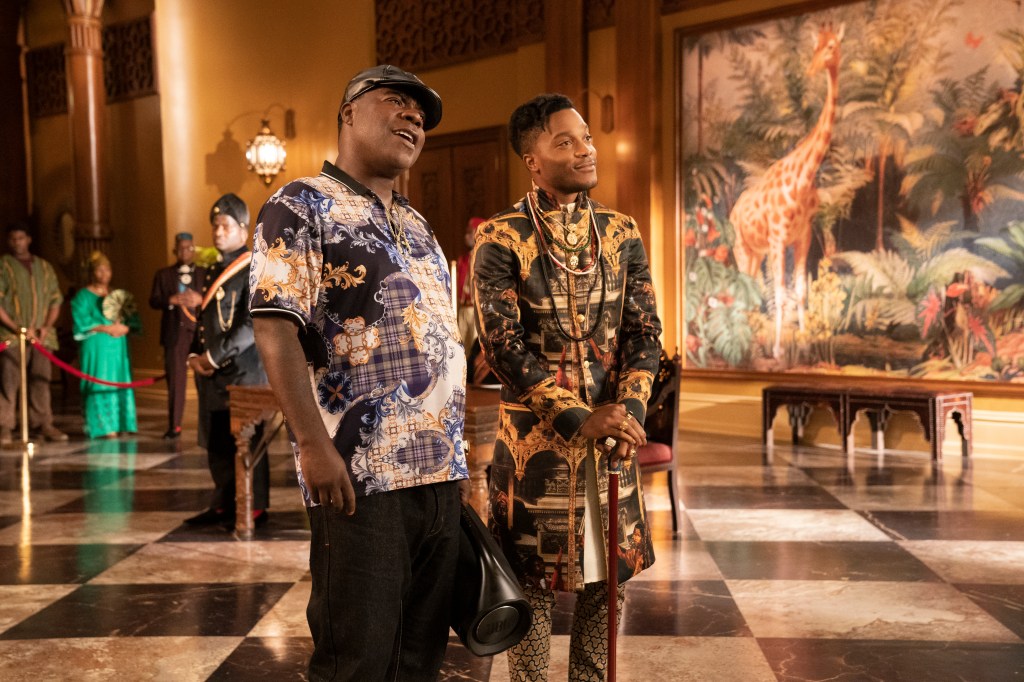 Ikiré Jones’ website includes a moving story of a young boy who grew up in Nigeria where he watched “a younger Eddie Murphy on a small-flickering television”; later living in Florence, Italy; and not long ago receiving a call to contribute to the film. The story ends by stating, “Refugees. Runway Shows. Hollywood Royalty. And Refugees, Again. Each of us could be any of these. Each of us would be no less beautiful because of it.” One of Ikiré Jones silk tapestry is also seen in the film and is sold by the brand as a 100 percent scarf/foulard (approximately 43 inches by 43 inches) made in Como, Italy. 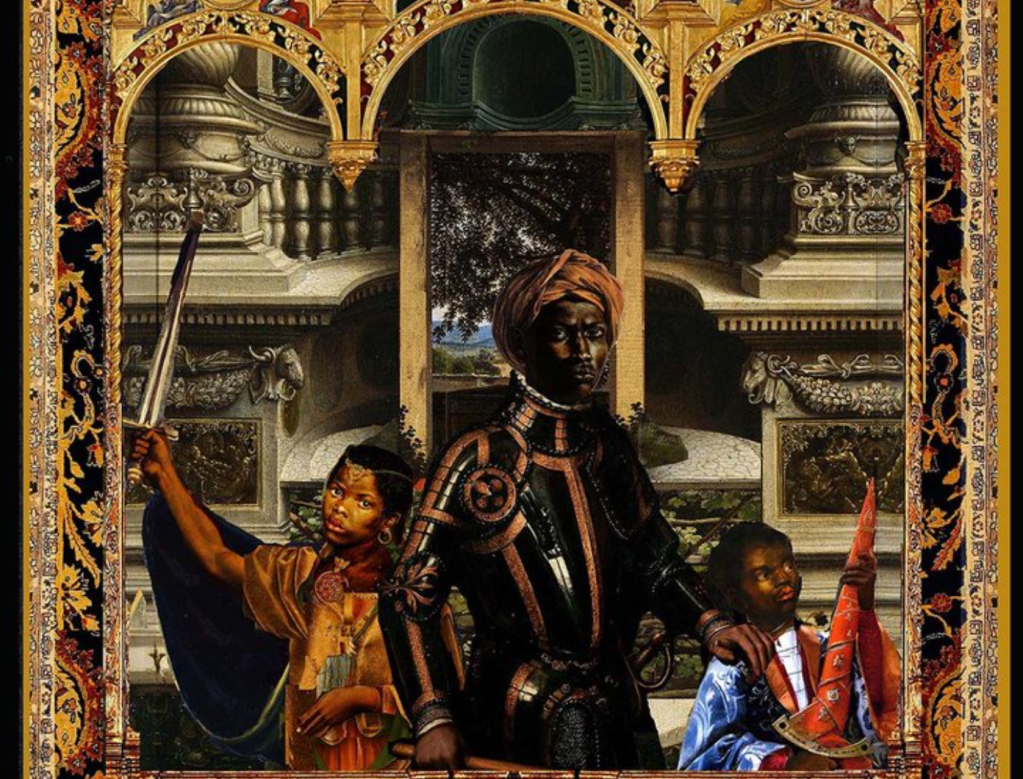 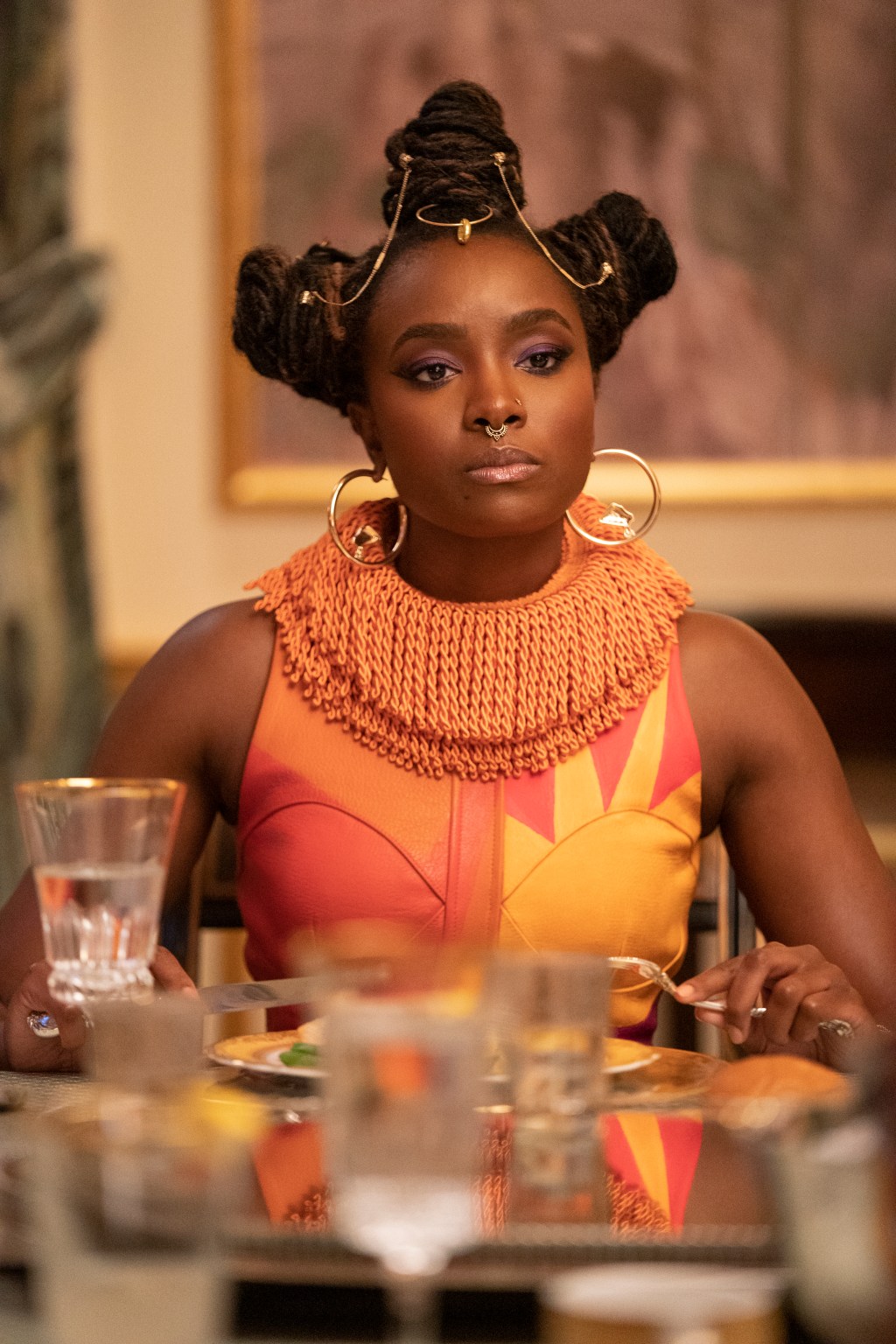 Plange, who has created skateboards and limited-edition bicycles, has also seen her designs worn by celebrities including Alyssa Milano, Viola Davis, Awkwafina and Gabrielle Union.

Of her one-of-a-kind hand-beaded fully lined mini dress — with stones collected from Ghana, Kenya, South Africa, Ivory Coast and Senegal — the designer advises, “Please note that this dress is an art piece and though it can be worn, you cannot sit down in this garment.” 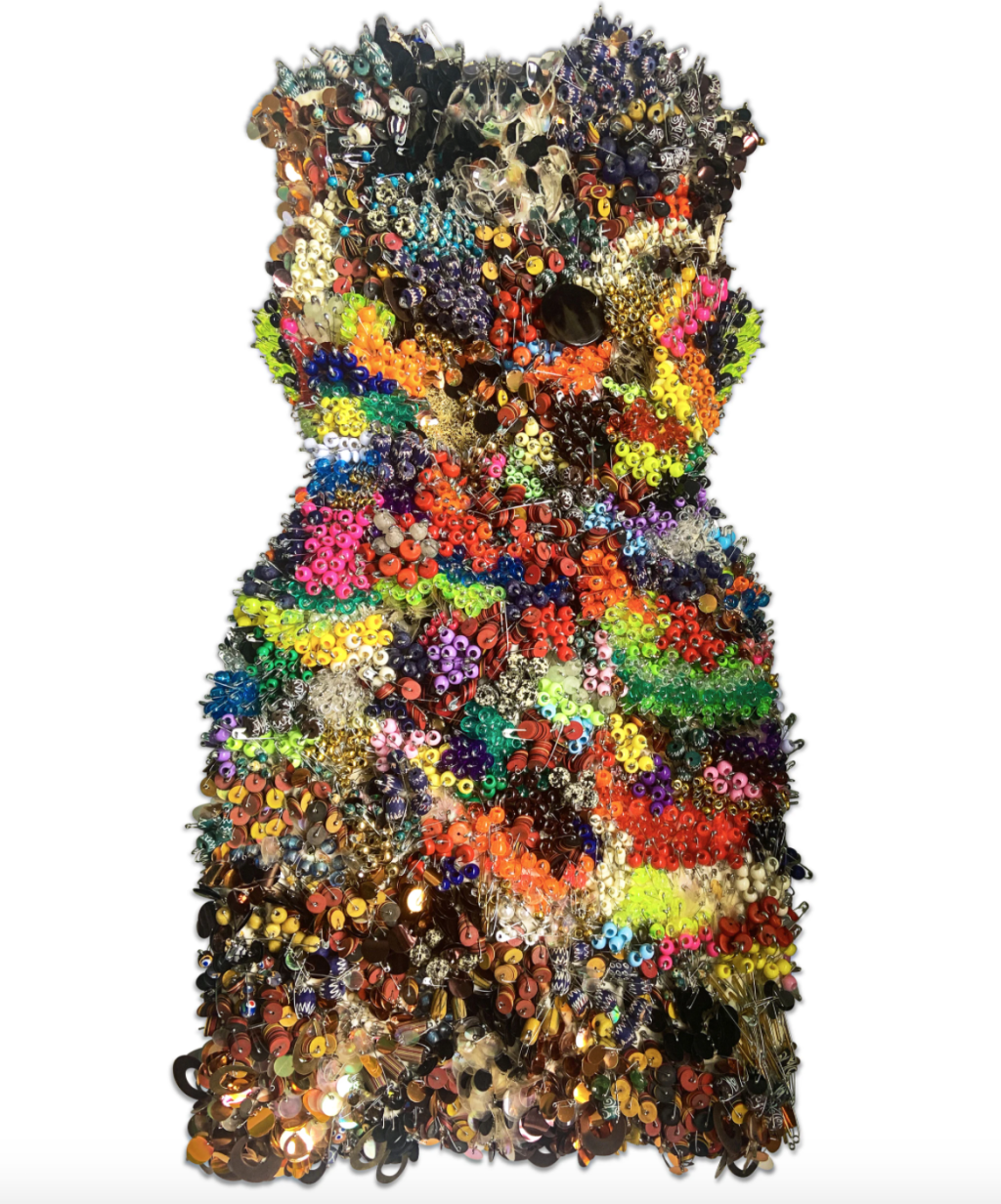 Founded by Ghana-born designer Magdalene Afia Sakyk, the accessories label, known for its rope necklaces, has been worn previously by Janet Jackson. 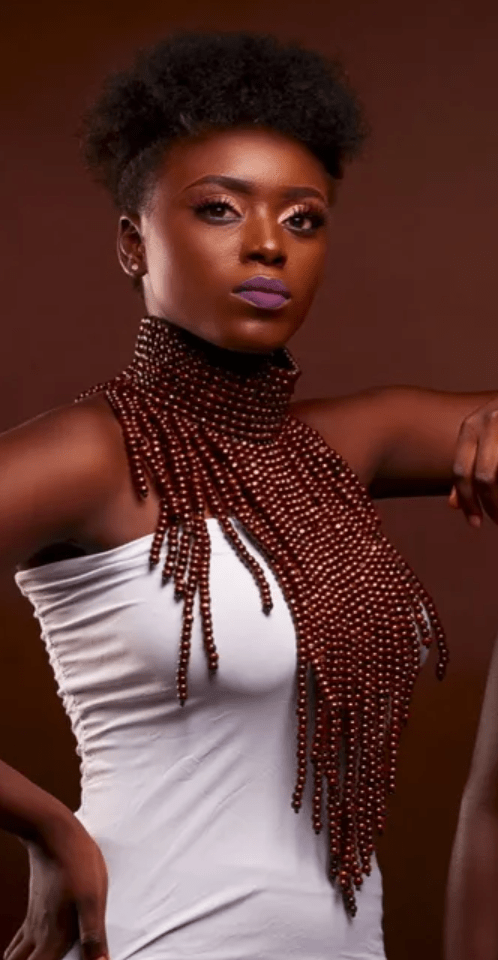 The designer, who was recently appointed as Foot Locker’s first women’s creative director, is the founder of an L.A.-based label that includes jewelry and apparel such as jackets, sweatpants, socks and tees. 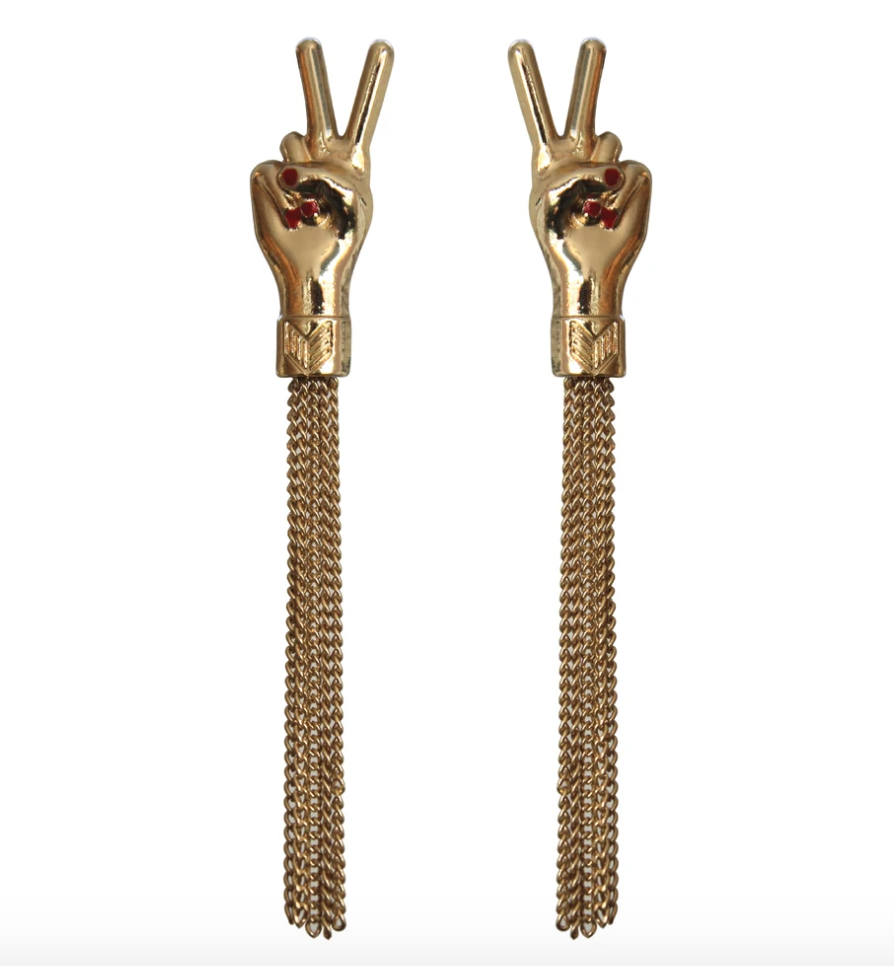 Jewelry designer Douriean Fletcher, who previously worked with Carter on pieces for Black Panther, created a golden sash for Semmi (Arsenio Hall) in Coming 2 America as well as a lip cuff for Princess Meeka (KiKi Layne) as seen on her Instagram and now for sale on her site. 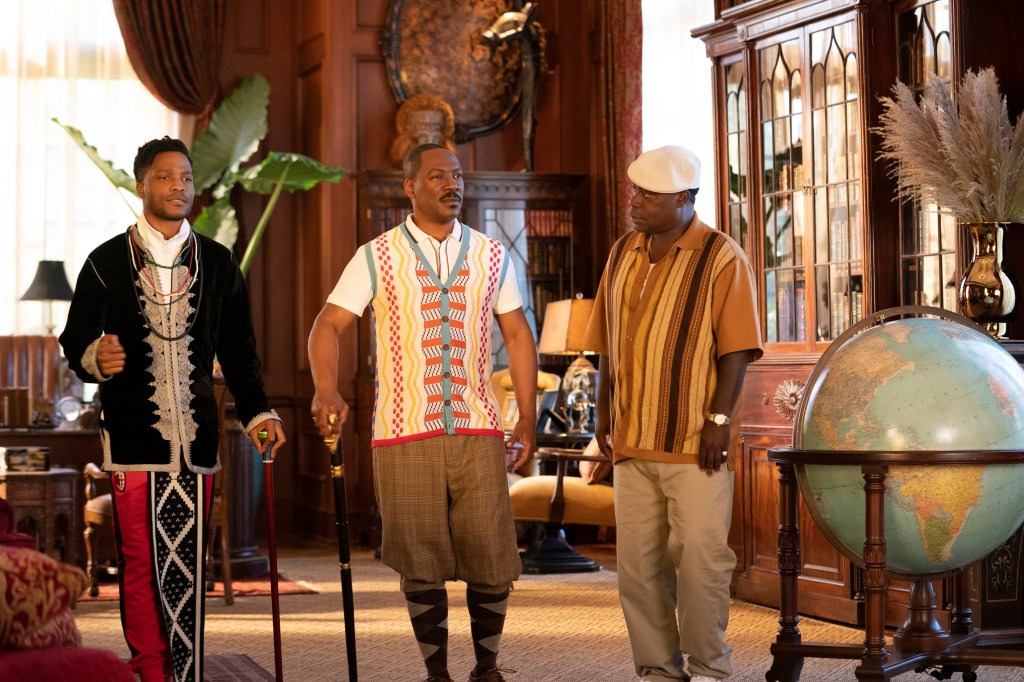 The line includes an array of apparel for both men and women in arresting prints. 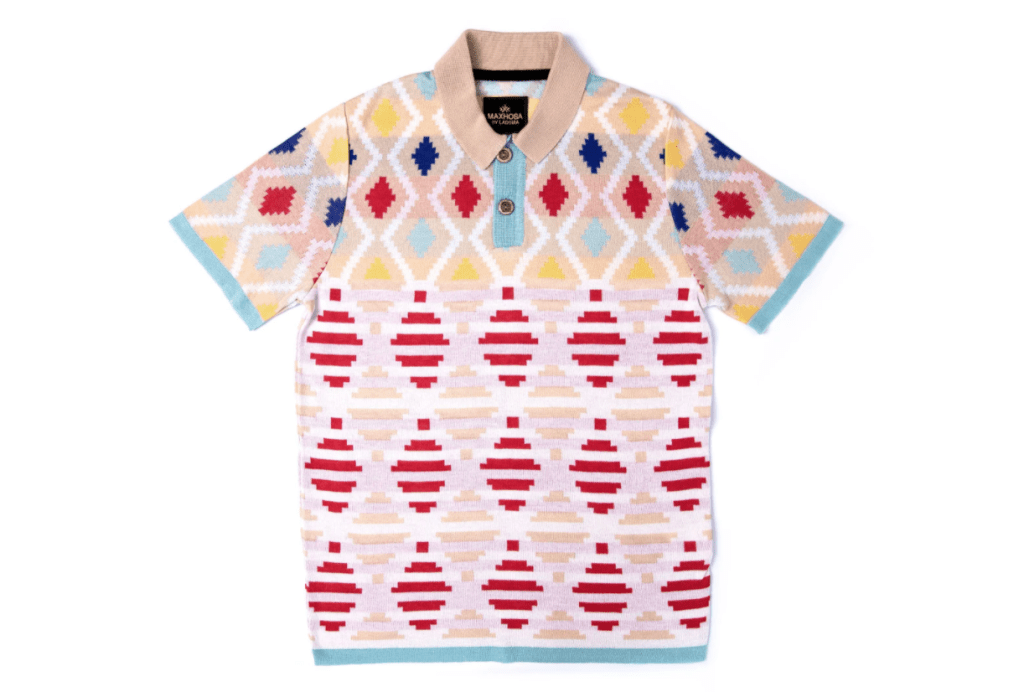 Based in the Washington, DC area, TruFacebyGrace was founded by Grace Yeboah Ofori, who moved from Ghana to Canada as a teenager and later to the U.S. Her label’s mission is to “create, manufacture and produce unique authentic designers influenced by vast African cultures.” Some of the label’s jewelry, accessories and apparel, seen on the label’s Instagram, were used in Coming 2 America. 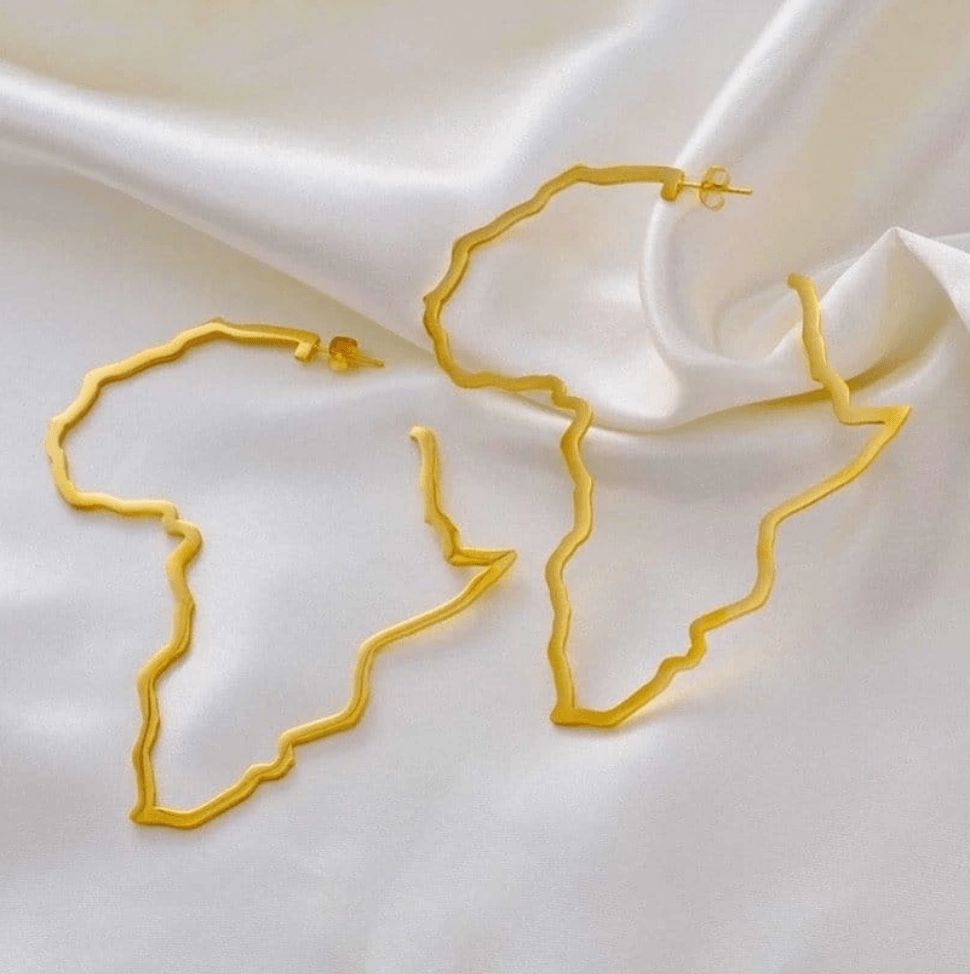 Appetite of a Millionaire

Fine jewelry by the Black-owned brand is worn by the royal family in Coming 2 America, including by Queen Lisa (played by Shari Headley). 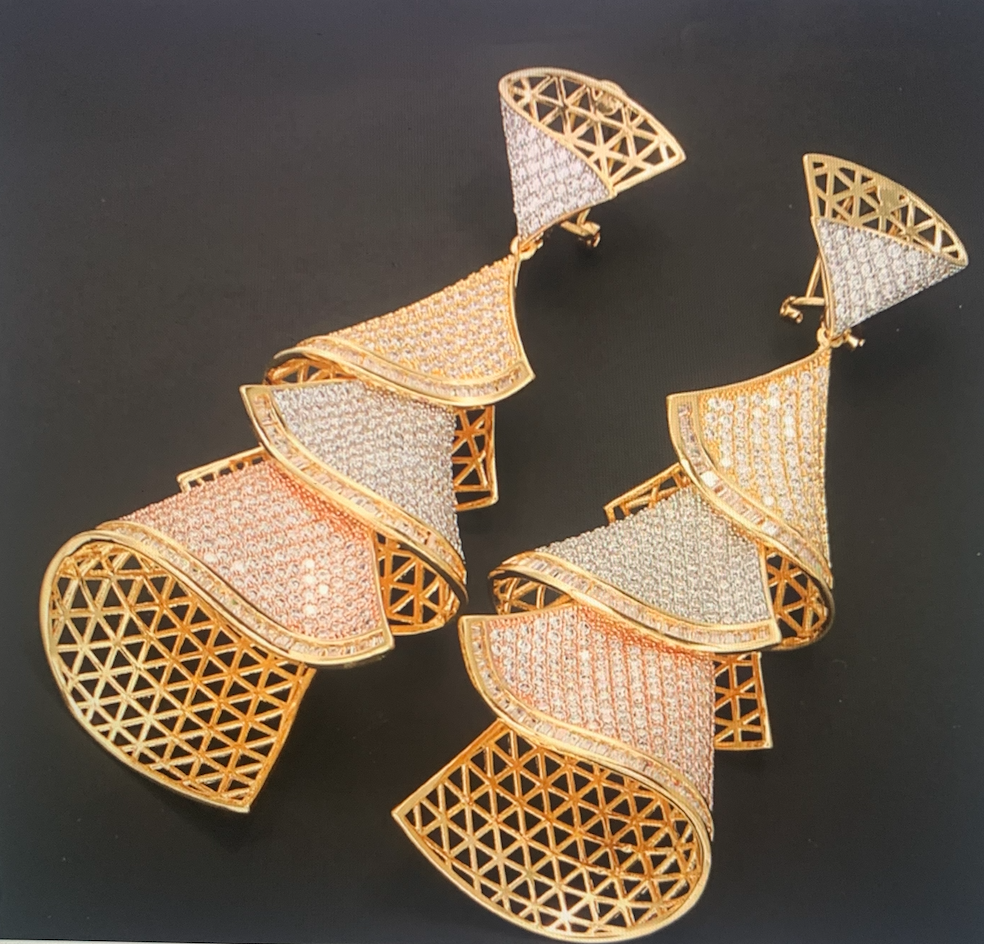 The Philadelphia-based, African-inspired fashion label is the creation of designer Stephanie Aevouelie, who sources fabrics and has her pieces produced in Côte d’Ivoire, where she was born. 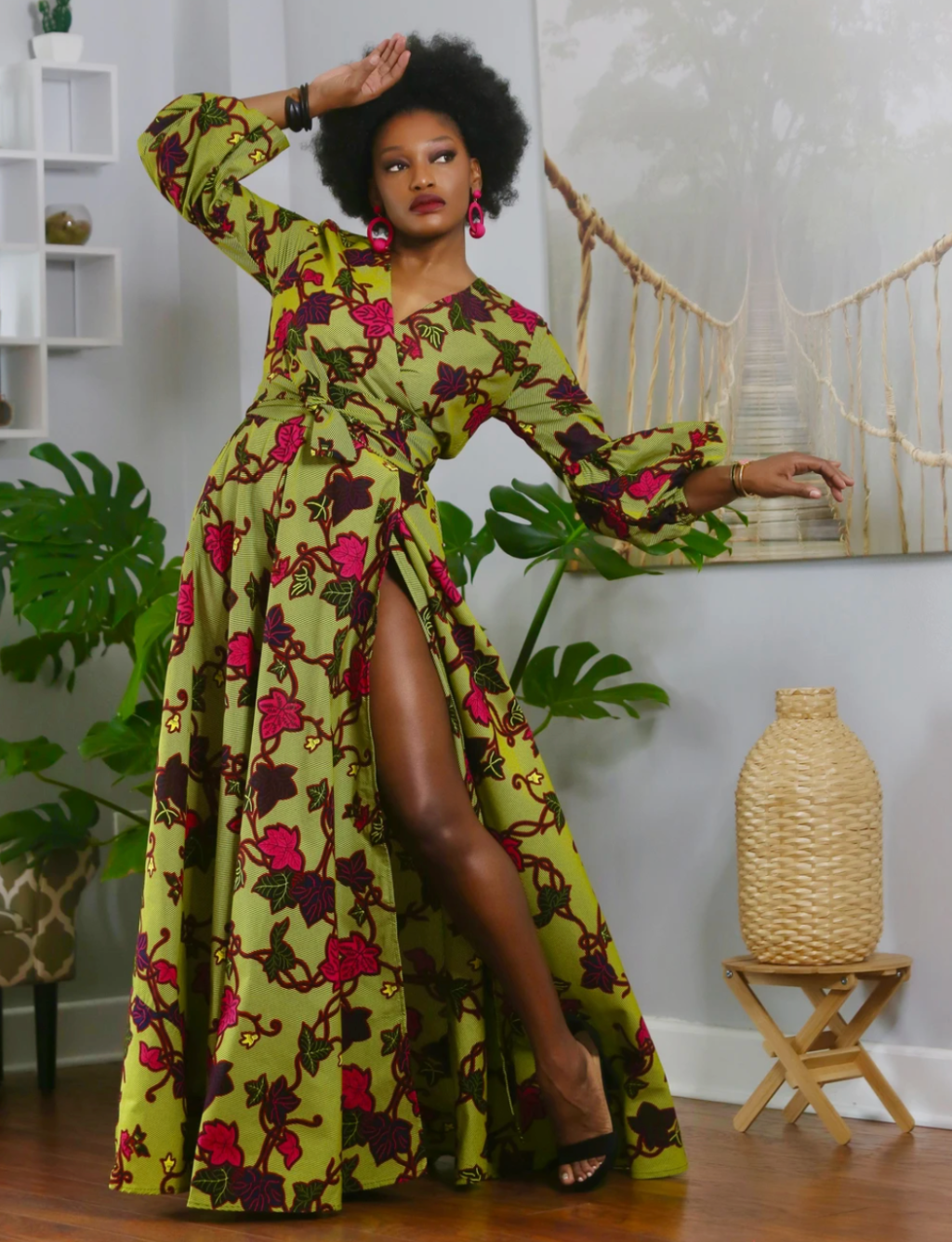 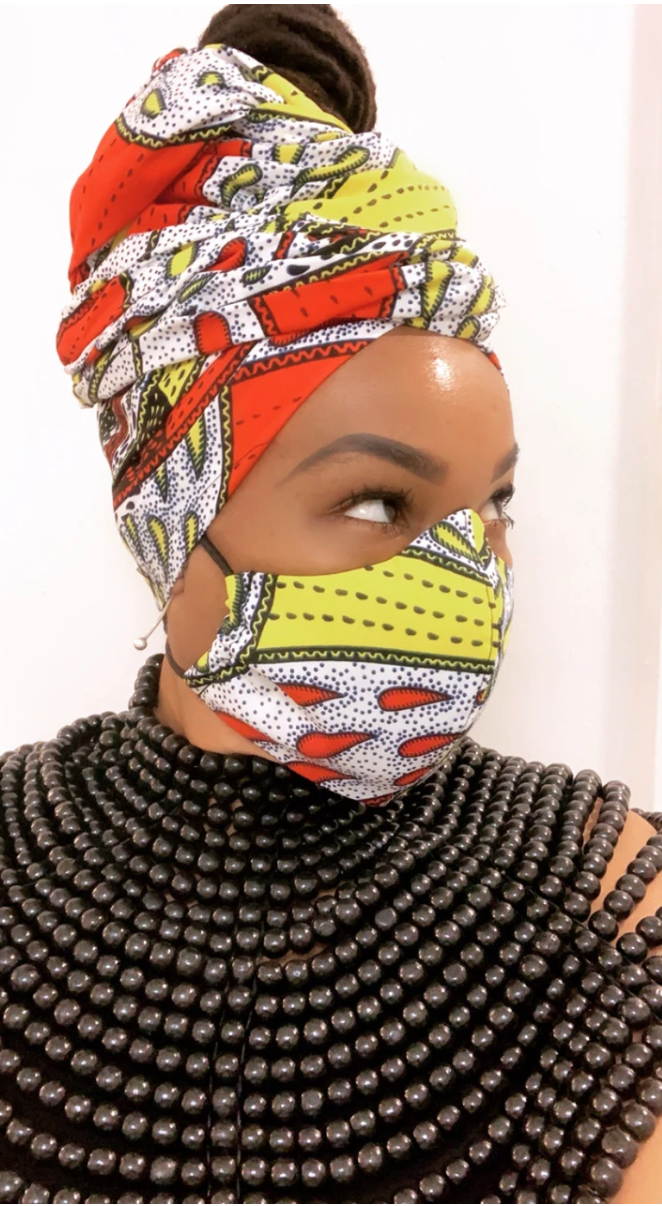 Paakow Essandoh of Mizizi (not one of the designers used in the movie) partnered with Paramount to produce four officially licensed sports jerseys emblazoned with the name of Zamunda, Prince Akeem’s fictional African country in Coming 2 America. 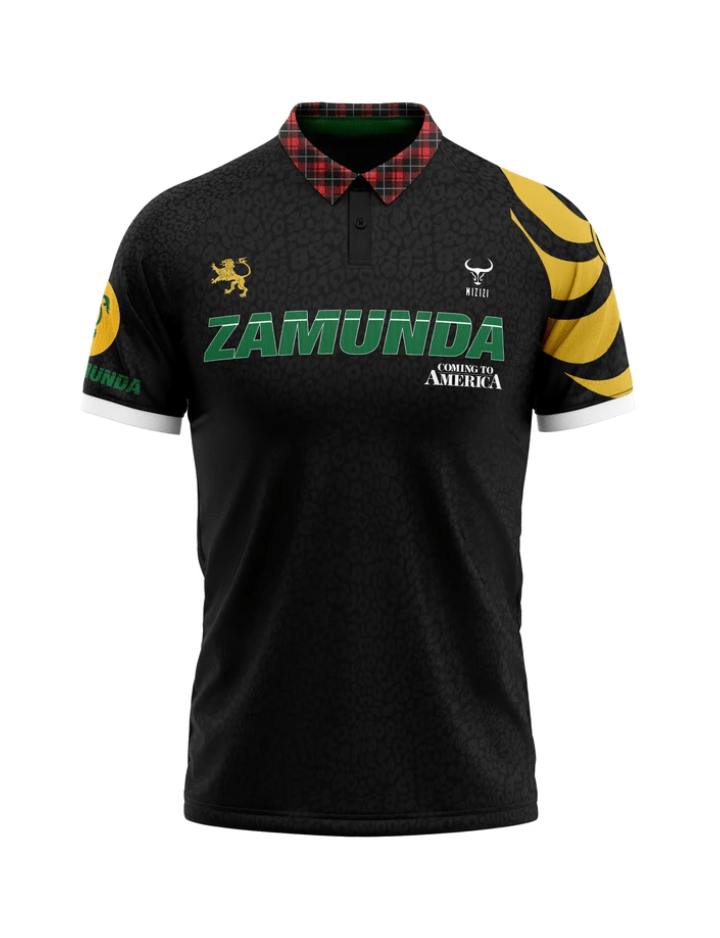