For five years, model Georgia May Jagger has been an investor in the buzzy business that will open its first U.S. outpost in Beverly Grove in mid-June. “Alex was the hair assistant on my first-ever photo shoot … I think she is the best hairdresser in the world!” says the Brit, who owns a home in L.A. “I always struggled a bit to find somewhere to get my hair done here — a lot of the salons are based on this quite intense, old-school feeling of Hollywood, so I felt there was something missing in the market.” Adds Brownsell: “It was Georgia’s idea to do the salon in L.A.”

The arty, intimate space has just four salon chairs. The personalized one-on-one service ($500 to $1,000 with Brownsell, who is seeing new clients for the first time in 10 years) includes consultation, mood boarding, color, trim, blowout, prescribed products for home maintenance and a 30-minute touch-up at a later date.

Shelves are kitted out with Bleach London’s hair products ($13-$25) including color in a signature array of eye-popping shades, such as Tangerine Dream.

“Copper is the buzz word now — everyone wants the look,” says Brownsell. “Even on the blond side we’re seeing warmer tones being embraced, like Billie Eilish’s creamy warm blond, very different from a couple years ago when everybody had an icy color. I’ve got a very exciting client [coming in] called Jerry Hall [Jagger’s mother]. She’s going for copper. It’s really quite daring. I was surprised!”

The salon atmosphere is multi-sensory, from the iridescent epoxy floor and a sculptural marble sink to digital art projected onto the ceiling and a sound bath basin, which pay homage to Brownsell’s affection for ASMR (Autonomous Sensory Meridian Response) experiences. “It’s about hearing and seeing something that evokes a feeling within you and an emotive response from your body,” Brownsell explains of the ethos, apparent on the brand’s TikTok channel.

“The sink where you get your hair washed looks like a piece of black volcanic rock, like something out of a sci-fi movie,” says Jagger. “The concept is very immersive.”

In June, the Dyson Demo Store at Westfield Century City will become the only U.S. location to roll out a blow-dry bar with a menu of eight styles for all types of hair ($50, can be applied as store credit on product purchases, same day only).

“Yesterday I saw Halle Berry, Charlize Theron and Bebe Rexha,” says colorist-to-the-stars Tracey Cunningham of some of the client roster she sees at Mèche salon in Beverly Hills (8820 Burton Way, mechesalonla.com). Even her beginnings in the business had a celebrity touch: In the ’90s, Bette Midler paid for Cunningham’s education at L.A.’s Marinello School of Beauty, after the stylist worked as a nanny for the actress.

Now, Cunningham — whose client list has also included Emma Stone, Priyanka Chopra, Dakota Johnson, Margot Robbie and Jennifer Lopez — is sharing all she’s learned with the world in her first book, Tracey Cunningham’s True Color ($27; Abrams). It’s packed with inspirational imagery of famous women with fantastic locks through the ages and a history of hair moments — like Howard Hughes’ $10,000 challenge in 1931 to any stylist who could re-create Jean Harlow’s shade of blond and the late ‘70s advent of celebrity hair endorsements. 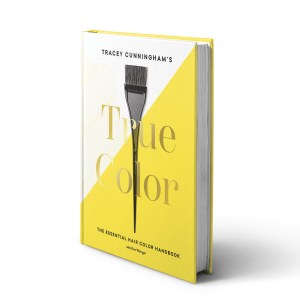 “The first thing you can do to make yourself look younger is not Botox, it’s not creams, it is hair color,” says Cunningham. She also includes hair advice from MDs and nutritionists “because people ask me questions as if I’m a doctor and I’m like, ‘Honey, I went to school for 1,600 hours at Marinello!’ “

As to current trends, “A lot of people are asking for red,” she says, adding that a top request is “when a brunette gets natural highlights and [wants to] still feel like a brunette.” For maintenance, she recommends hair-bonding products by Santa Barbara-based Olaplex, for which she’s an ambassador. “The No. 3 [Hair Perfector] is a pre-treatment before shampooing that makes hair stronger. Everyone notices a huge difference.”

A version of this story first appeared in the June 2 issue of The Hollywood Reporter magazine. Click here to subscribe.