Not everyone can have a celebrity stylist (or two) at their disposal, but sustainable fine jewelry brand Vrai’s new collaboration aims to give customers the next best thing. Vrai has teamed up with world-renowned styling pair Rob Zangardi and Mariel Haenn, known as Rob and Mariel, to launch Vrai x RandM, a unisex collection that Vrai CEO Mona Akhavi describes as both timeless and modern, with pieces that aren’t just passing trends — “they’re something you can attach to a specific moment in your life.”

When it comes to creating thoughtful, lasting, yet boundary-pushing designs, Zangardi and Haenn were the perfect choice for a Vrai partnership. They’re the visionaries behind looks worn by Jennifer Lopez, Gwen Stefani, Lily Collins and Cara Delevingne, and the powerhouse partners hold the title of one of The Hollywood Reporter‘s Top 10 Stylists of the Decade.

“They’re constantly creating these looks, reinventing looks for celebrities to express themselves through their style, but they’re also pushing the envelope, which is exactly how we want when we’re putting out a luxury collection,” Akhavi explains of how the collaboration was conceived, recognizing how the styling team’s distinctive aesthetic meshed with Vrai’s distinctive take on classic jewels. ”We have unique diamonds, we have shapes that are innovative. We have that capability to be able to create pieces that you might not find in one place.”

For the stylist duo, who say they bonded over jewelry when they first met, designing a collection with a purpose was a seamless no-brainer. Fads come and go, but items that signify something personal become that much more special.

“I think it was important for Mariel and I both, that each piece kind of had direction or kind of a meaning behind it,” Zangardi shares. Akhavi’s approach to the concept behind Vrai x RandM is the same. “It’s less about trends in fashion in the market, it’s more about what it means to them [the consumer]. Especially as the world opens up and with the events of last year, everyone has gotten a lot more introspective, and in a way, we tried to position that as well with this collection.”

Sustainability is in Vrai’s DNA — their diamonds are grown in a zero-emission foundry and are not mined — and that aspect of the brand was another factor Zangardi and Haenn were drawn to. “Sustainability is a core value. It’s a given. It was wonderful to see this was a mission for Rob and Mariel as well, as they were looking at creating fashion that has no negative human and environmental tolls. And for us, that’s obviously a main focus in everything we create,” Akhavi recalls.

While Zangardi and Haenn have generated iconic looks for A-listers and worked on memorable high-profile performances (ahem, does J. Lo’s Versace sequined moment at Super Bowl LIV ring a bell?), it was important for them to create pieces that also work on an everyday level.

“When people look at us they assume we only do red carpet or these big events and we sort of do everything, but we both really enjoy and appreciate jewelry that can be worn all the time. We wanted to have a range that you could wear everyday and still include some of those high-impact pieces that could be worn for the red carpet. That is overall our style aesthetic and who we are,” Haenn expresses, discussing how her extensive styling experience has informed her attitude toward design.

Zangardi puts it in a way that every jewelry lover can get behind: “We call it everyday diamonds.”

Vrai x RandM is available on vrai.com starting May 6, and the collection ranges from $2,200 to $58,000. They’re not only statement pieces, they’re pieces that aim to make statements.

For instance, the Contract Ring, a 14k yellow-gold band with an inscription and two half-moon diamonds, is a modern take on the traditional promise ring, but what that promise means is up to the wearer’s interpretation. “You make promises to other people, but the trend is toward consumers looking forward to pieces that are true to the promise they want to make to themselves and their own values,” Akhavi says, emphasizing her focus on messaging that matters. 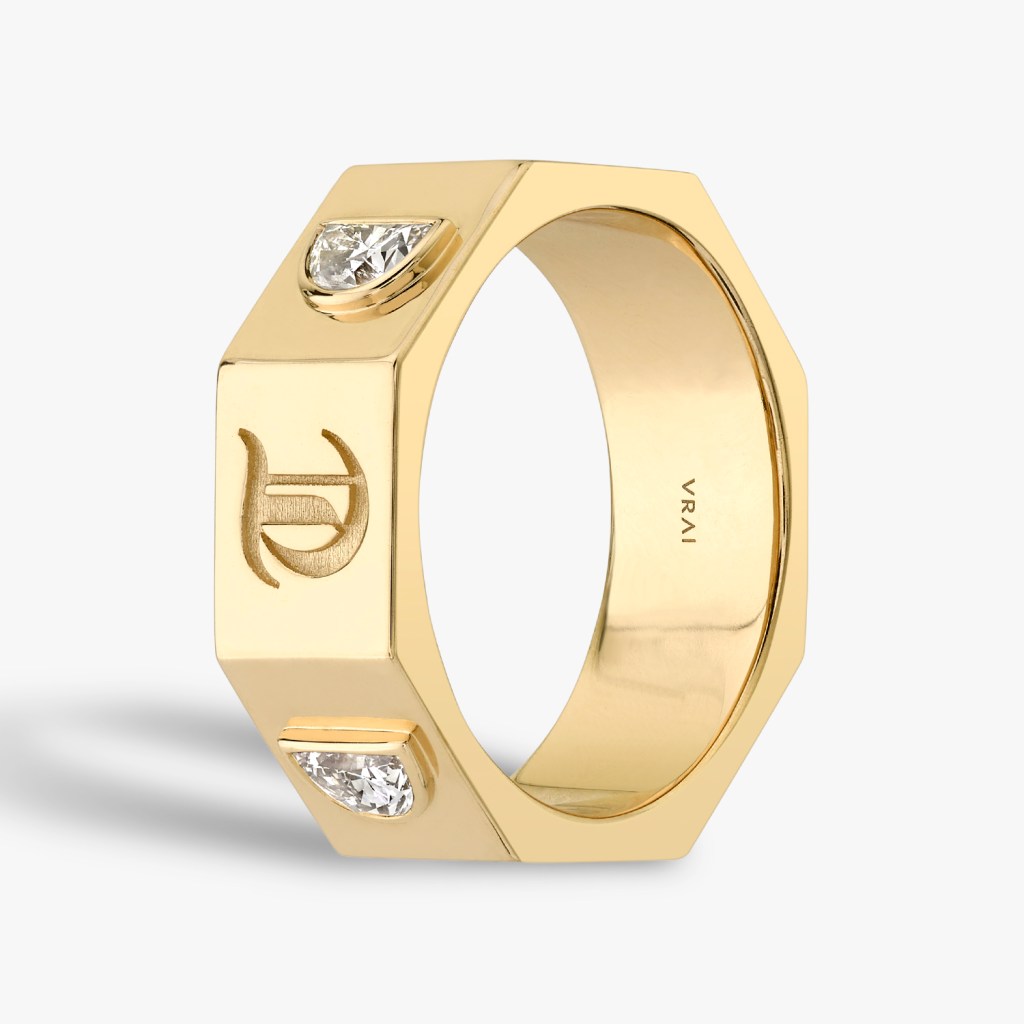 If you’re looking to shine as bright as J.Lo (who isn’t?), who sparkled in Vrai x RandM at Global Citizen’s Vax Live concert last week, there’s always the 35 carat Illuminate Choker. The statement stunner features more than 50 Vrai-created diamonds in six shapes, including baguette, lozenge, hexagon, marquise and round brilliant. 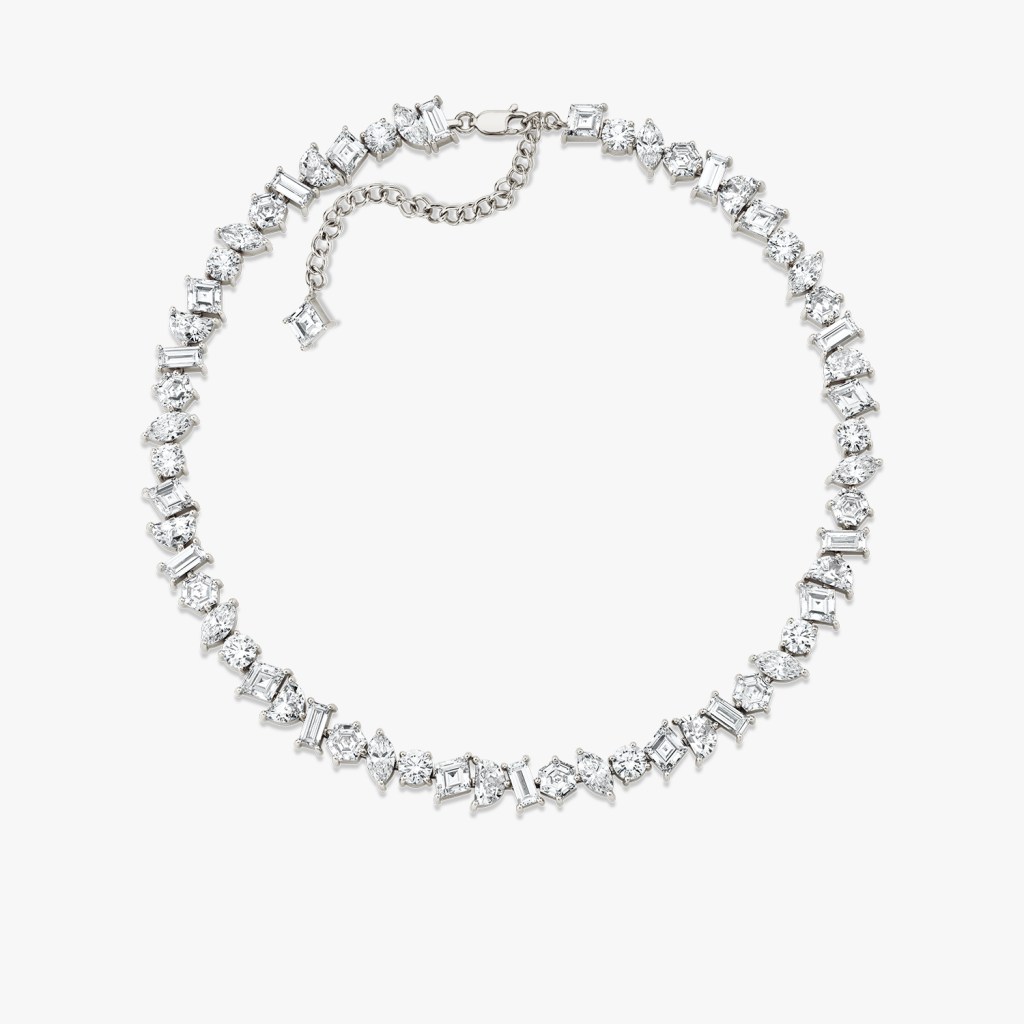 The Currency Necklace, a 14k yellow gold chain featuring a Vrai-created baguette-cut diamond, is a piece that Akhavi says “reminds you of your self-worth as you’re going through your day.” 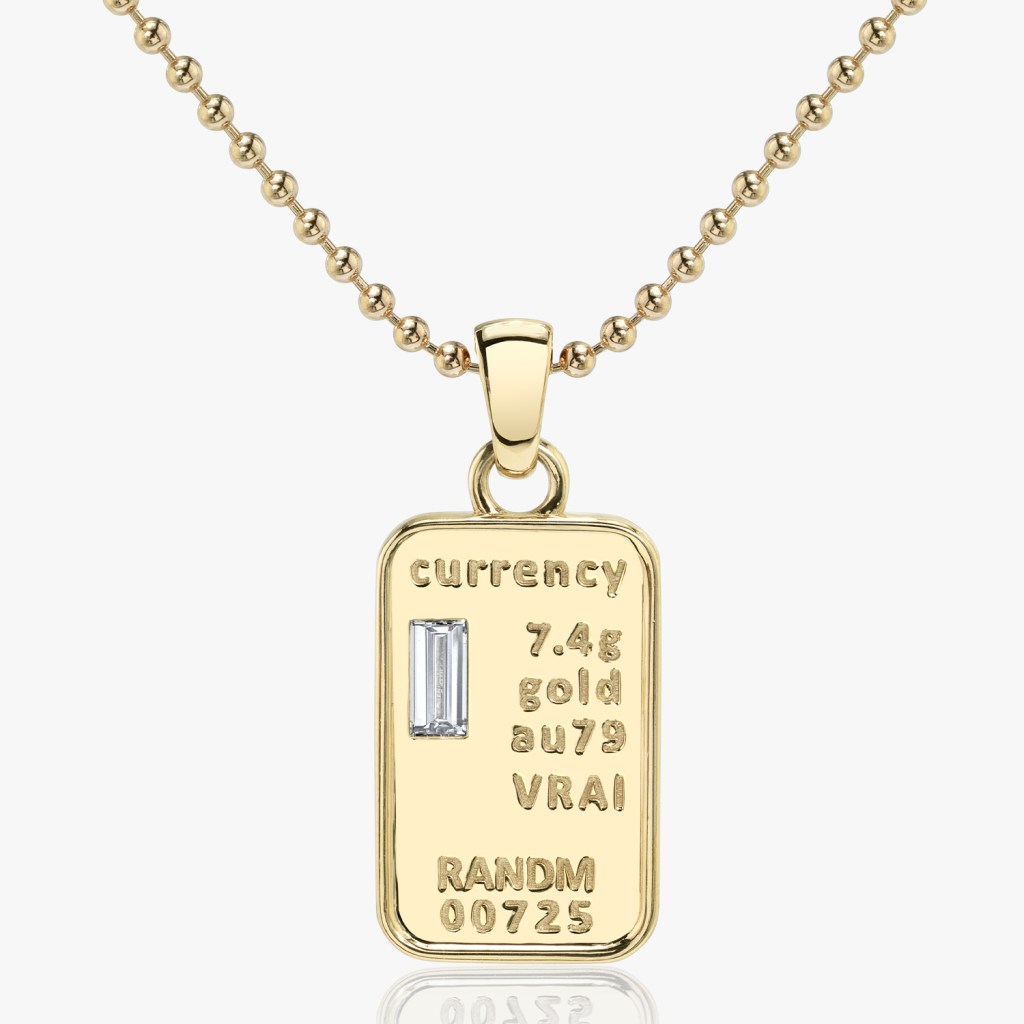 The Compass Ring is a “reminder of direction,” Zangardi notes, and features a Vrai-created lozenge cut diamond set in 14k gold. “It’s a modern take on a signet, which is a traditional piece,” says Akhavi. “The compass orientation has that meaning to guide you through your day and your life as you are wearing it.” 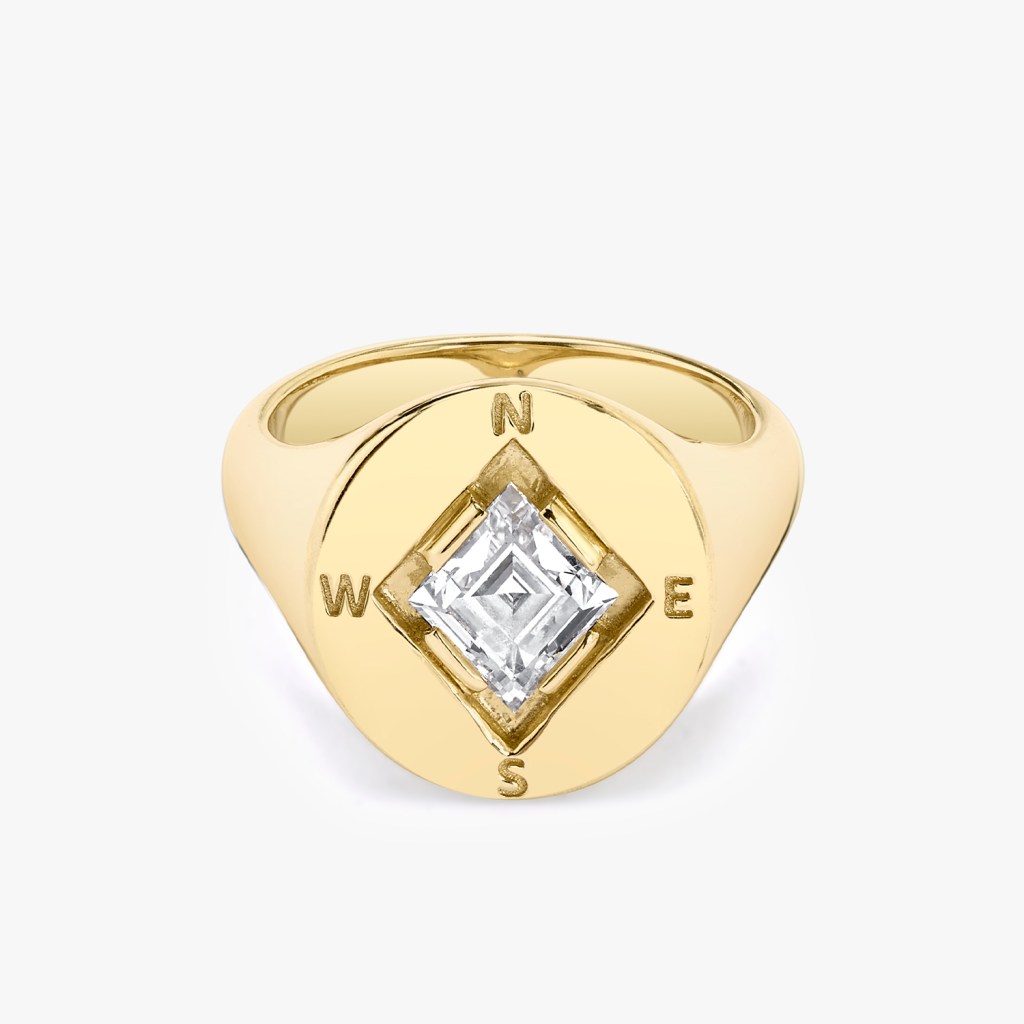 When Akhavi started brainstorming with Zangardi and Haenn, she asked them what kind of jewelry they haven’t been able to find throughout their styling journey. The Unity Ear Arc is the kind of individualistic statement-making piece that’s “a signal to the world of your capacity to collaborate,” says Akhavi. 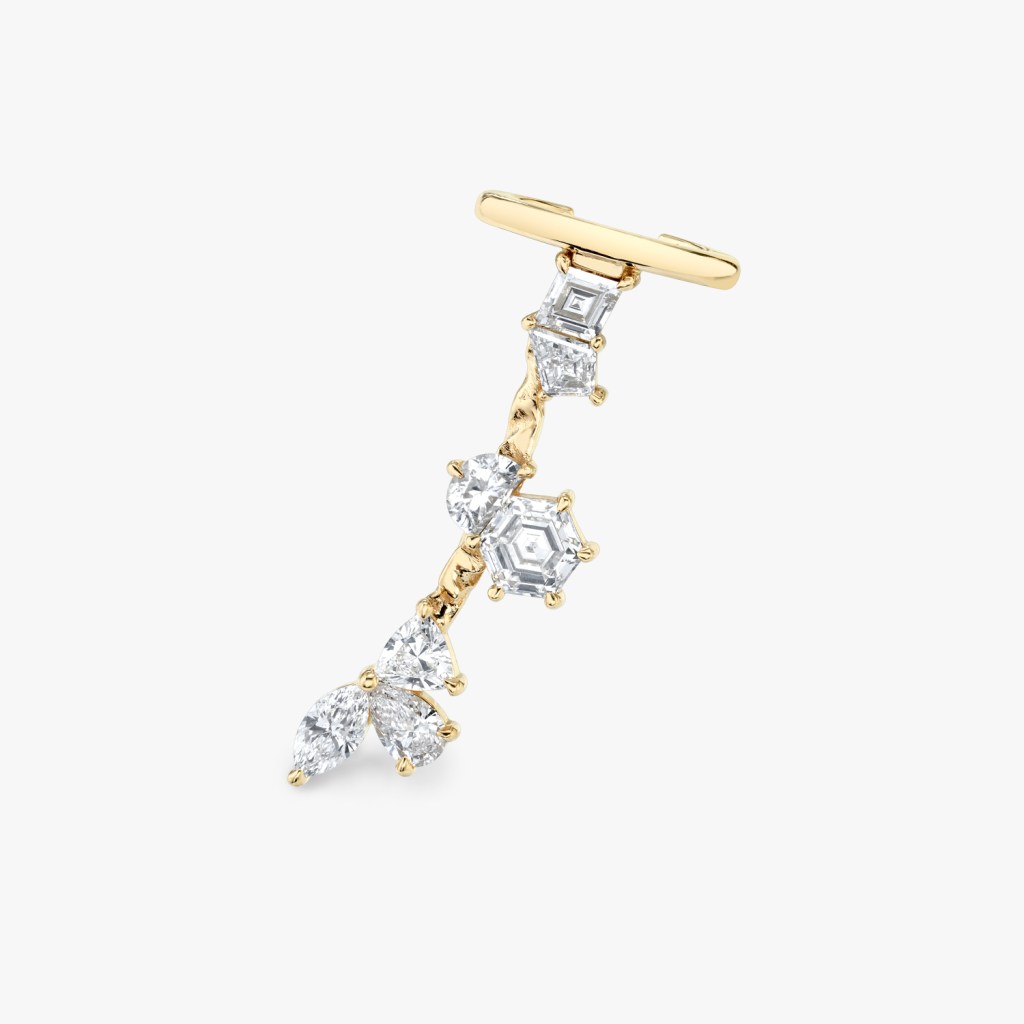 The empowering Strength Necklace, featuring an out-of-the-ordinary shield cut, is a versatile piece that easily works for either red carpet or date night. 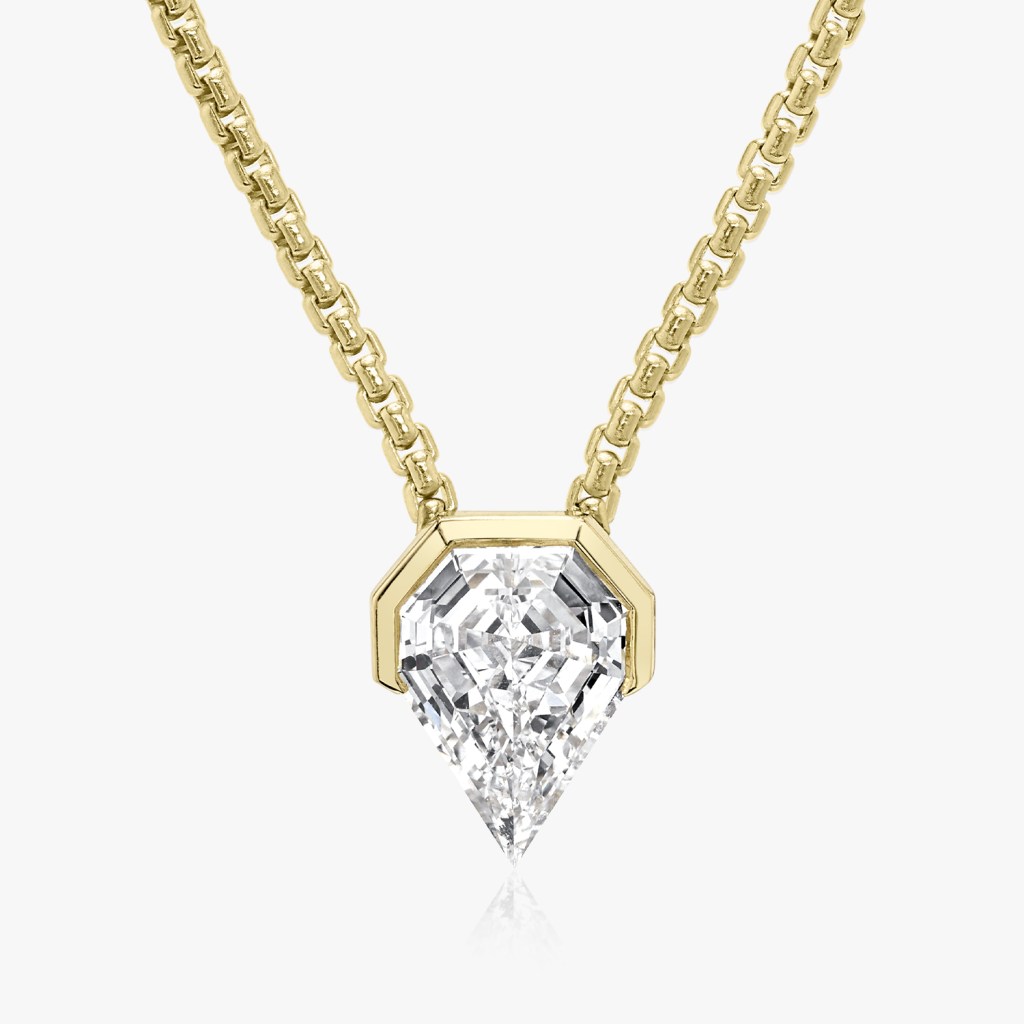 Thanks to its distinctively shaped, Vrai-created diamonds in a minimal 14k gold setting, the Illuminate Stud has a classic feel with a contemporary twist. 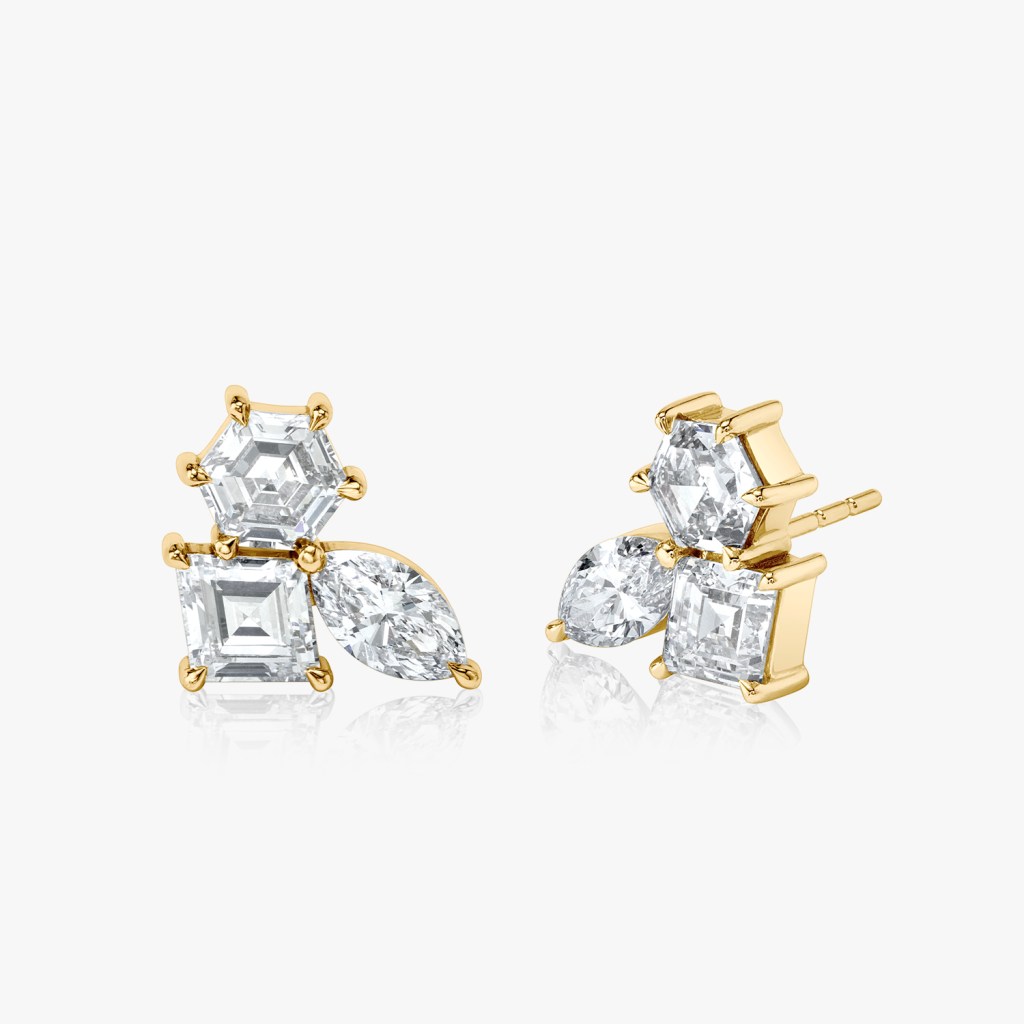