Continue to The Hollywood Reporter SKIP AD
You will be redirected back to your article in seconds
Skip to main content
August 9, 2019 8:00am

Even with the sensory overload that was Netflix’s Santa Monica High School takeover for the June 28 Stranger Things premiere, it was impossible to miss Caleb McLaughlin. Amid the cheerleaders and marching band, the 17-year-old star, who plays Lucas Sinclair on the series, stood out thanks to what he had on his feet. 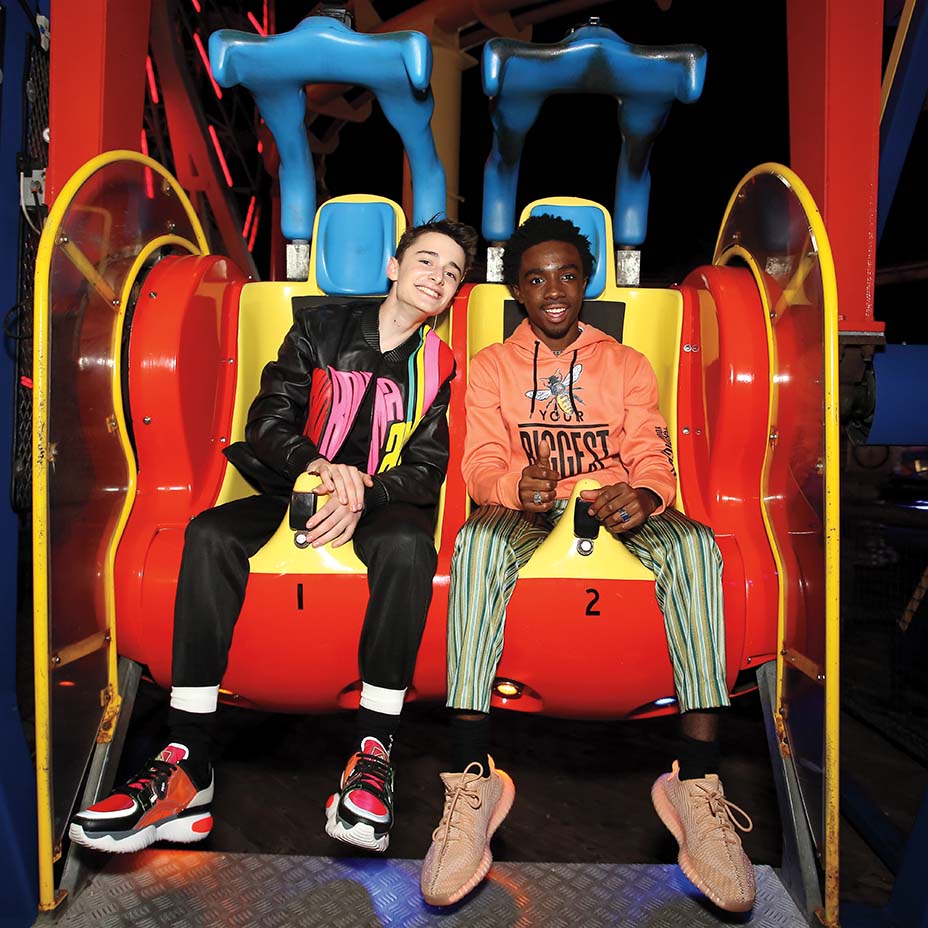 McLaughlin even pulled a sneaker sequel when the festivities shifted to the Santa Monica Pier afterparty, slipping on a pair of sought-after Kanye West-designed Yeezy Boost 350 V2 Clay shoes. Those knit kicks sold out in a flash when they debuted in March and are available only on the resale market for more than $330.

“I love sneakers,” says McLaughlin from his Atlanta-area home, where he sits surrounded by a growing collection of “about 70 to 75” pairs. His favorites, rarely worn, are “my Cactus Jacks” (the Nike and Scott collaboration named after the rapper’s record label) and a pair of Air Jordan V Wings. These sold-out Nikes feature illustrations from students at Little Black Pearl, a nonprofit arts center serving Chicago’s youth. McLaughlin says he has his eyes on Virgil Abloh-designed Jordan 1 Retro Off-Whites: “Those are hot!” So is the price. Available only on resale outlets, the high-tops are going for north of $1,000. As for why sneakers are so hot right now, McLaughlin has a simple answer: “People just like feeling good and looking good.” 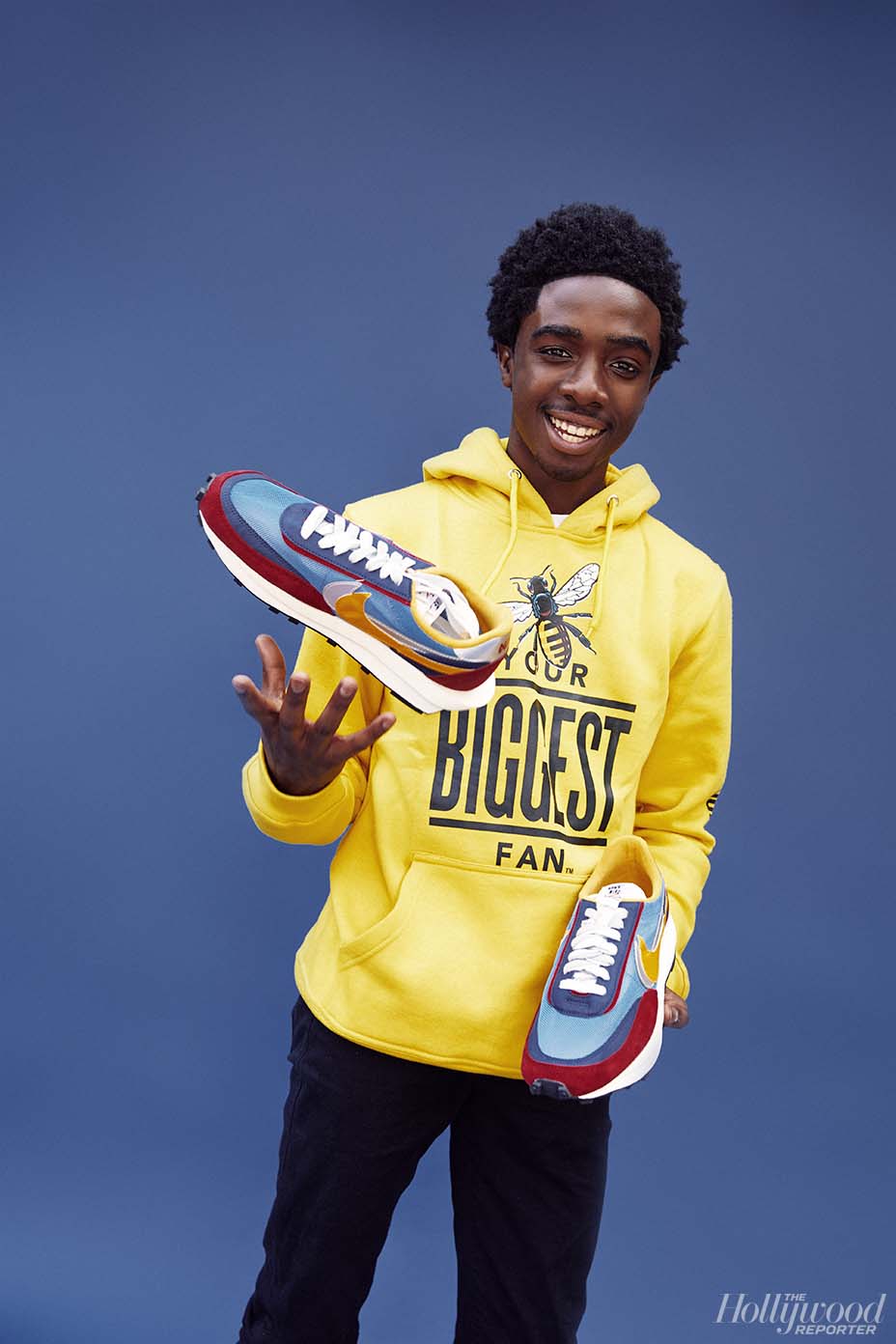 They’re also great business: The athletic shoe makes up about 40 percent of the entire retail market worldwide, driving $44 billion in sales in the U.S. during 2018 alone, according to sports and retail analyst Matt Powell, vp and senior industry adviser for The NPD Group. The resale market, while also robust, is not monitored, though Powell estimates annual sales between $1 billion and $2 billion. In July, Sotheby’s set the record for the most expensive pair of trainers ever sold at auction, with 1972 Nike Waffle Racing Flat Moon Shoes going for $437,500 to Canadian collector Miles Nadal, who plans to display them in his private museum. As for cultural relevance, Yeezy creator West recently appeared on the cover of Forbes — and not for his music: His Adidas brand is expected to haul in $1.5 billion this year. 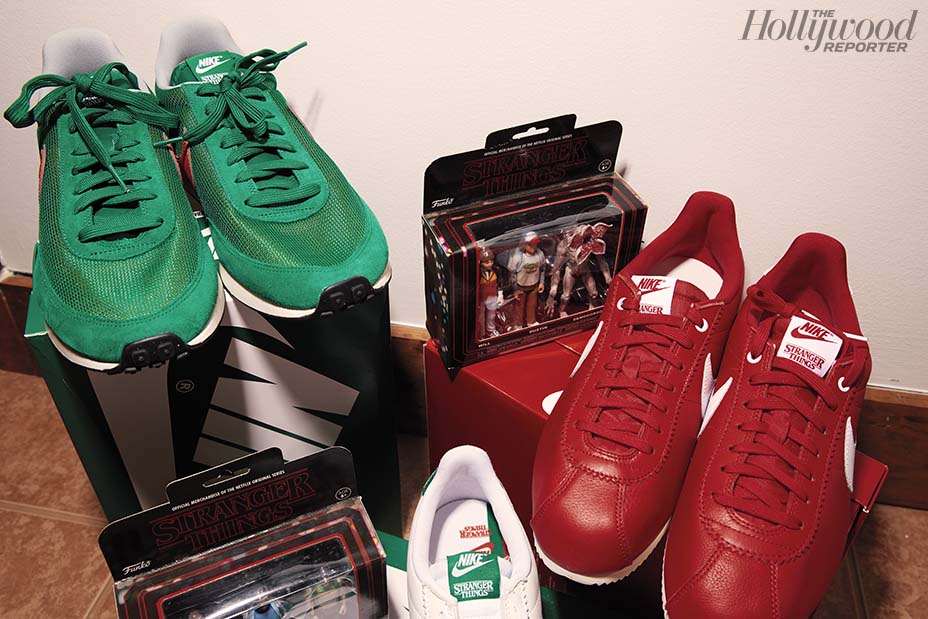 Formerly reserved for set-stomping producers, creative types and laid-back Silicon Valley bros, sneakers today are donned by suited power agents and CEOs and can be a flex to show off wealth and access. Andrew Weitz, The Hollywood Reporter men’s fashion expert and founder of consultancy The Weitz Effect, says that during his days as a WME agent, he was an early adopter of the sneaker trend in his company, thanks to a pair of white Lanvins. “Over the past 10 years, the sneaker world has exploded, and every luxury brand is selling sneakers now,” he says, adding that he advises his top Hollywood clients to own at least one pair of high-end designer sneakers in their closet. “It’s important to getting noticed in the right way.” 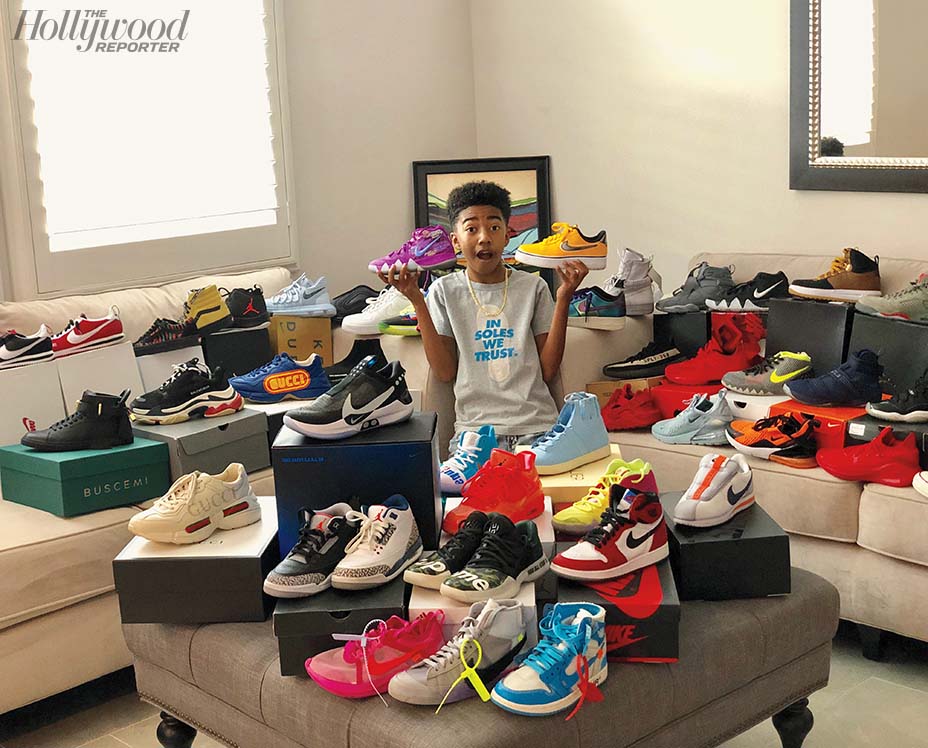 And yet “we’re still at the tip of the iceberg,” says Howie Kahn, co-author of 2017 best-selling cultural tome Sneakers, who notes that the style phenomenon will get a boost from Quibi’s upcoming You Ain’t Got These sneaker-culture series with Waithe, who “has great taste and great style.” Kahn adds that star tie-ins only fuel the fire: “For all the collabs, drops and high-end shoes we’ve seen recently, people are still going crazy. There’s only going to be more [fever].”

In particular, vintage kicks — like Reebok’s Club C sneakers, courtesy of a recently launched campaign from Cardi B — are having a moment, and the chunky Dad sneaker trend that raced into overdrive thanks to offerings from luxury houses like Balenciaga, Gucci, Givenchy and Prada still has life, says Kahn, who adds: “So much of getting dressed in Hollywood is what your stylist puts on you, and the sneaker remains a bastion of self-expression.” Insiders note that the summer’s hottest styles include Sacai x Nike Waffle, Abloh’s Off-White collab with Nike on the Air Force 1 MCA, West’s Yeezy Lundmark Reflective and Scott’s Air Jordan 1 Low that McLaughlin favors.

One would be hard-pressed to find a sneakerhead in Hollywood who knows more about its business and culture than David Friendly. The Oscar-nominated producer of Little Miss Sunshine, who is at work on USA’s Queen of the South, is a collector with a closet that rotates between 75 and 100 pairs at a time.

His street cred includes co-directing and producing the 2015 doc Sneakerheadz, for which he shot 80 hours of footage and traversed the globe. “I became kind of encyclopedic about it,” says Friendly, who recalls his first romance with sneakers as a 14-year-old in 1970s New York. “There was a basketball player I idolized, Pistol Pete Maravich. He was famous for wearing the first leather basketball shoes, the Adidas Superstar. They were $25. My parents said, ‘We’re not spending $25 on sneakers. You can get those when you have your own money.'” 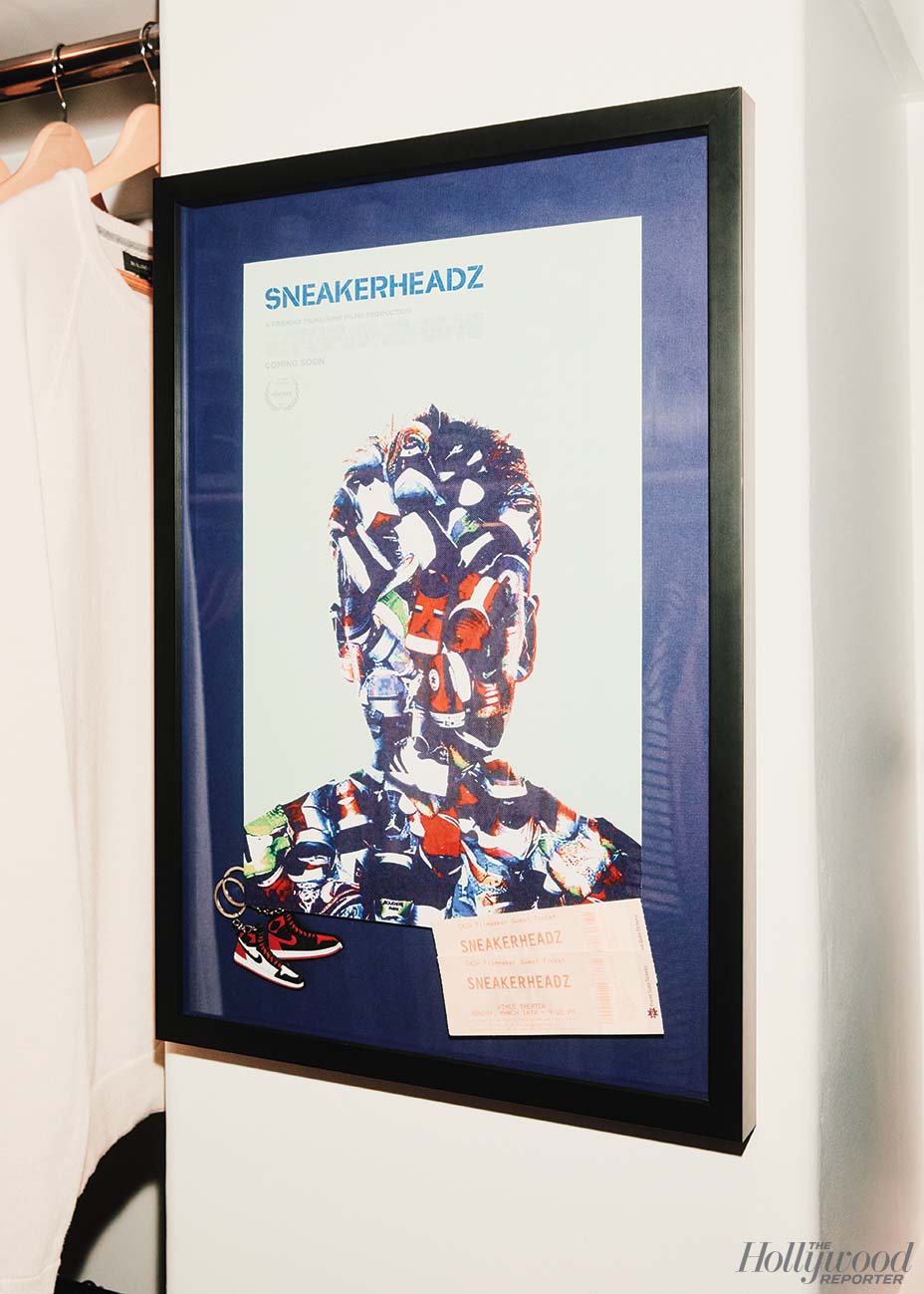 Decades later, in 2004, Friendly was in New York shooting a film, and he popped into SoHo’s Adidas store and saw a reissued pair of the shoes. “I bought them — that started my fascination with sneaker culture,” he says. “I still have them, and they put a smile on my face when I put them on.”

While others may pick a suit or shirt first to get dressed in the morning, “I start with what pair of kicks I want to wear that day and just build around that,” says Friendly, who sneaks sneaker shopping into work trips, no matter where in the world he happens to be. He’s browsed in Malta and bought a pair in Mexico City, but his favorite store is Bodega in Boston (now in L.A.). In Los Angeles, he favors Kith at Sunset Plaza, RIF in downtown, and the sneaker haven that is Fairfax Avenue — known by devotees as “the block” — where hotspots like Flight Club are located. 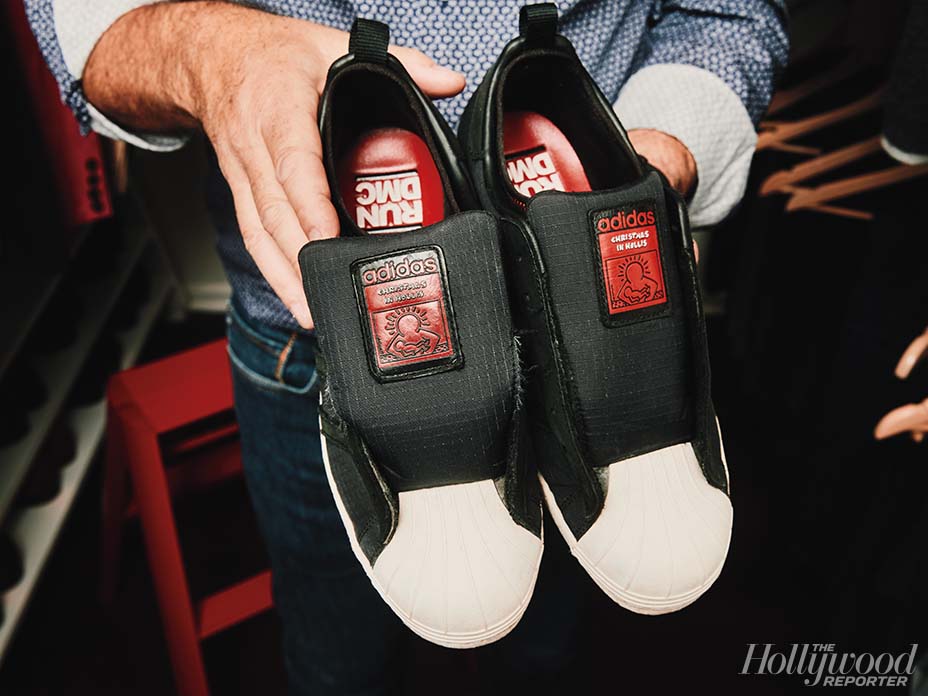 “Some avid collectors buy two pair — one to rock and one to stock,” he says, noting his propensity to wear what he buys. “Because I have a lot, things don’t get worn more than two or three times in a year, so they stay pretty crisp. I don’t believe in putting things away on ice, as they say, for resale later. Everything I buy is something I want to wear, and I do.”

Just don’t tell his wife. “I’m currently under embargo,” he says with a smile. “I’ve been told, ‘No more sneakers in 2019.’ But you know, we have our ways. Hey, listen, it could have been cars or watches. That’s a lot more expensive, right?” 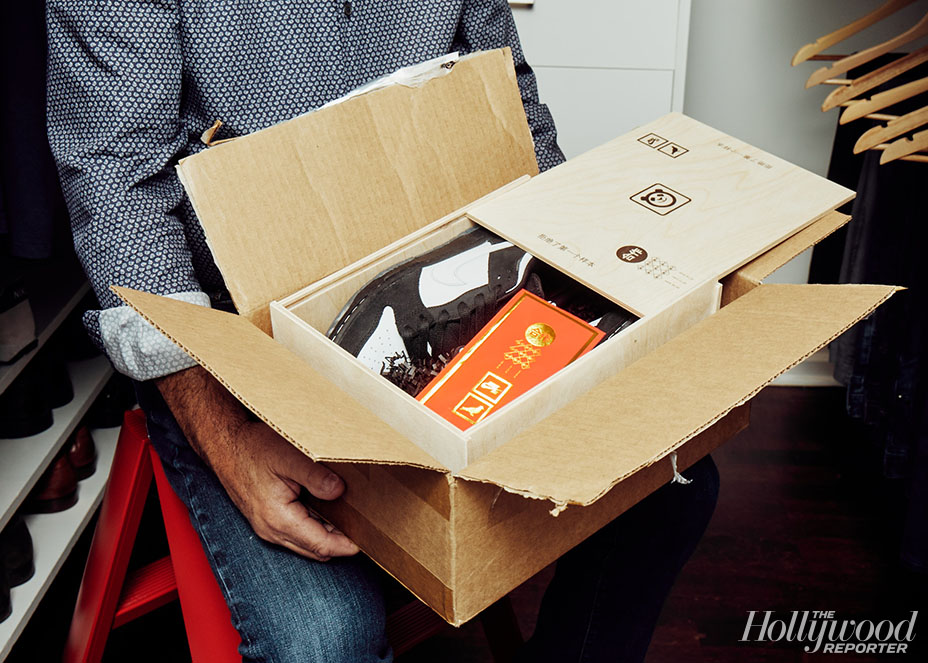 The Art of Wearing Sneakers on the Red Carpet

“The pop of color from the teal Paul Smith suit, complemented by a crisp white shirt, gives King a sharp look. Adding a clean white trainer with a touch of gray brings out his outfit to look fresh and chic,” says Weitz. He adds that this “smart, casual vibe” works only if the designer sneakers are “streamlined and structured, to elevate the outfit.”