“I was 5 years old during the Manson trials and became fascinated by pictures of Sharon Tate,” says Heba Thorisdottir, the makeup department head on Once Upon a Time in Hollywood, Quentin Tarantino’s highly anticipated film, opening Friday, July 26. “I started collecting photos of her. She was just so innocent and angelic.”

Decades later, Thorisdottir has channeled a version of the references she knew as a child into perhaps one of the most widely seen depictions of Tate to date. A frequent collaborator of Tarantino who worked closely on the film with hair department head Janine Thompson and costume designer Arianne Phillips, the makeup artist is far from the only one fascinated by Tate’s beauty. There are countless YouTube tutorials and Pinterest boards dedicated to Tate’s makeup look and even Valley of the Dolls product collaborations. Last year, Julien’s Auctions had a sale of Tate’s original beauty products, including her personal set of signature false eyelashes that were valued around $600.

Tate’s intense gaze and deep-set eyes, often laden with a full set of lashes on the top and bottom, has both haunted and inspired scores of people over the past 50 years, but when it came time to designing the makeup for Once Upon a Time in Hollywood, Thorisdottir says she was only slightly daunted when tasked with re-creating the look of Tate (Margot Robbie) and such other well-known real-life characters. 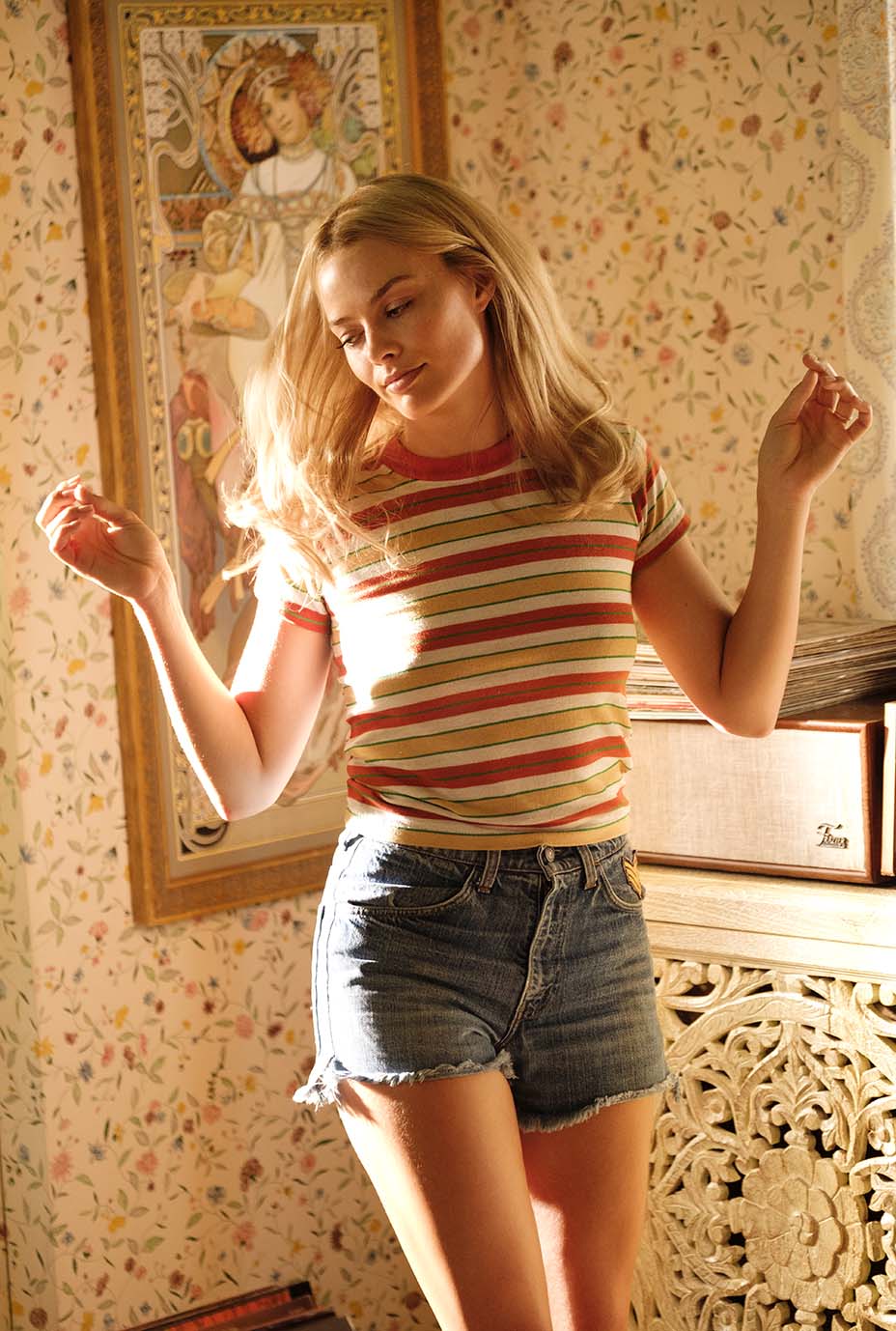 In addition to Tate, Thorisdottir says Charles Manson, Steve McQueen and Manson family member Lynette “Squeaky” Fromme were key looks that she and her team worked hard to capture solely through the makeup in their kits, eschewing the use of any prosthetics.

“Quentin didn’t want any prosthetics used, as it could distract from the character,” says Thorisdottir. “In a way, the movie is his dream and fantasy of Hollywood.”

She says the looks created on Robbie appease both hardcore Tate fans, who may have never seen a more natural side of her, as well as those looking for the iconic beauty she was known for.

“Most people that love Sharon just want the iconic look,” says Thorisdottir. “Quentin wanted to show her as an angelic, gorgeous woman inside and out who wasn’t always made up, to show a little more real, at-home Sharon. So we did have a lot of scenes of her at home, as well as when she goes out and has her iconic lashes and liner. We got to please both Sharon’s family and honor her in a way they would be proud of, as well as her fans, so they might see a side of her that they didn’t know.” 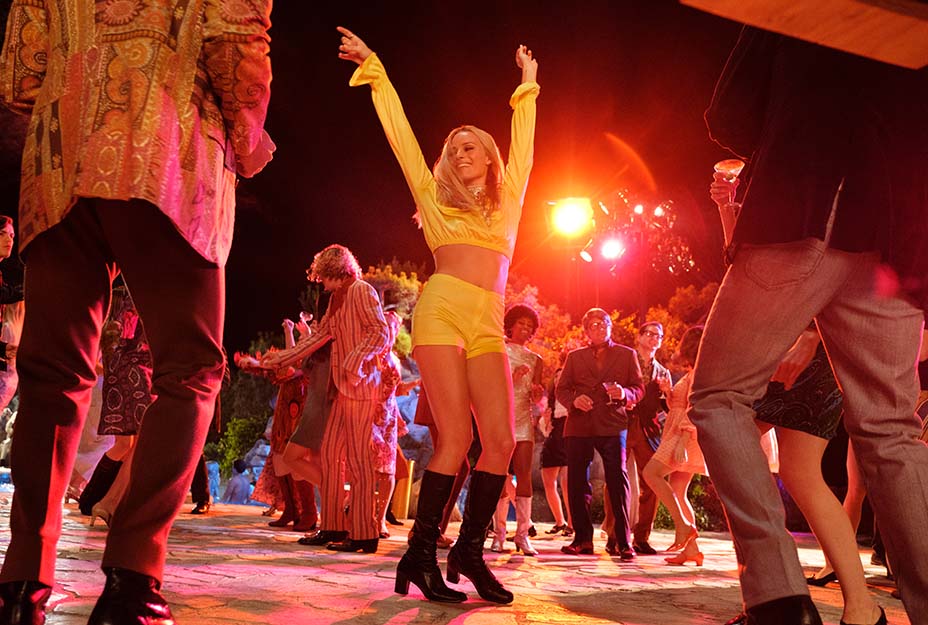 To create Tate’s iconic “lashes and liner” look, Thorisdottir turned to Greta Garbo’s signature beauty. Tate’s late makeup artist Ben Nye was inspired by Garbo and adjusted the technique so the makeup worked with color film, as opposed to Garbo’s black-and-white medium. “He did her makeup for Valley of the Dolls, and when you look closely at iconic photos of Garbo and Sharon, it’s basically the same makeup,” she says.

Tate’s makeup in Valley of the Dolls and what she began using in her own life was indicative of the time period. Trends were moving away from blue eyeshadow and pastel lips of the early ’60s, making way for more neutral tones and natural makeup.

“Even from my research, Sharon herself was moving away from that,” says Thorisdottir of a more frosted look. “She was very fashion-conscious and loved clothing and hair and makeup and moving more toward the hippie look. That’s just my interpretation of it. She was also pregnant and feeling more grounded; her hair started getting darker and not as highlighted in the last few months. She was also growing-in her eyebrows a little bit.”

She prepped the skin with Iconolab Renewal Face Oil, which is packed with highly concentrated Bulgarian rose otto oil and vitamin E. She says she often massages it into actors’ faces to get the blood flowing or cuts it into the foundation to make the finish a bit sheerer.

Valley of the Dolls-inspired lashes by the Los Angeles company Red Cherry were used on Robbie’s eyes for emphasis and to create Tate’s lash-heavy look.

On the lips, Thorisdottir went for neutral nude tones, letting the eyes tell the story. In addition to a swipe of By Terry Clear Rose Balm, she added Charlotte Tilbury’s lipstick in Hepburn Honey along with a peach tone, Bitch Perfect. 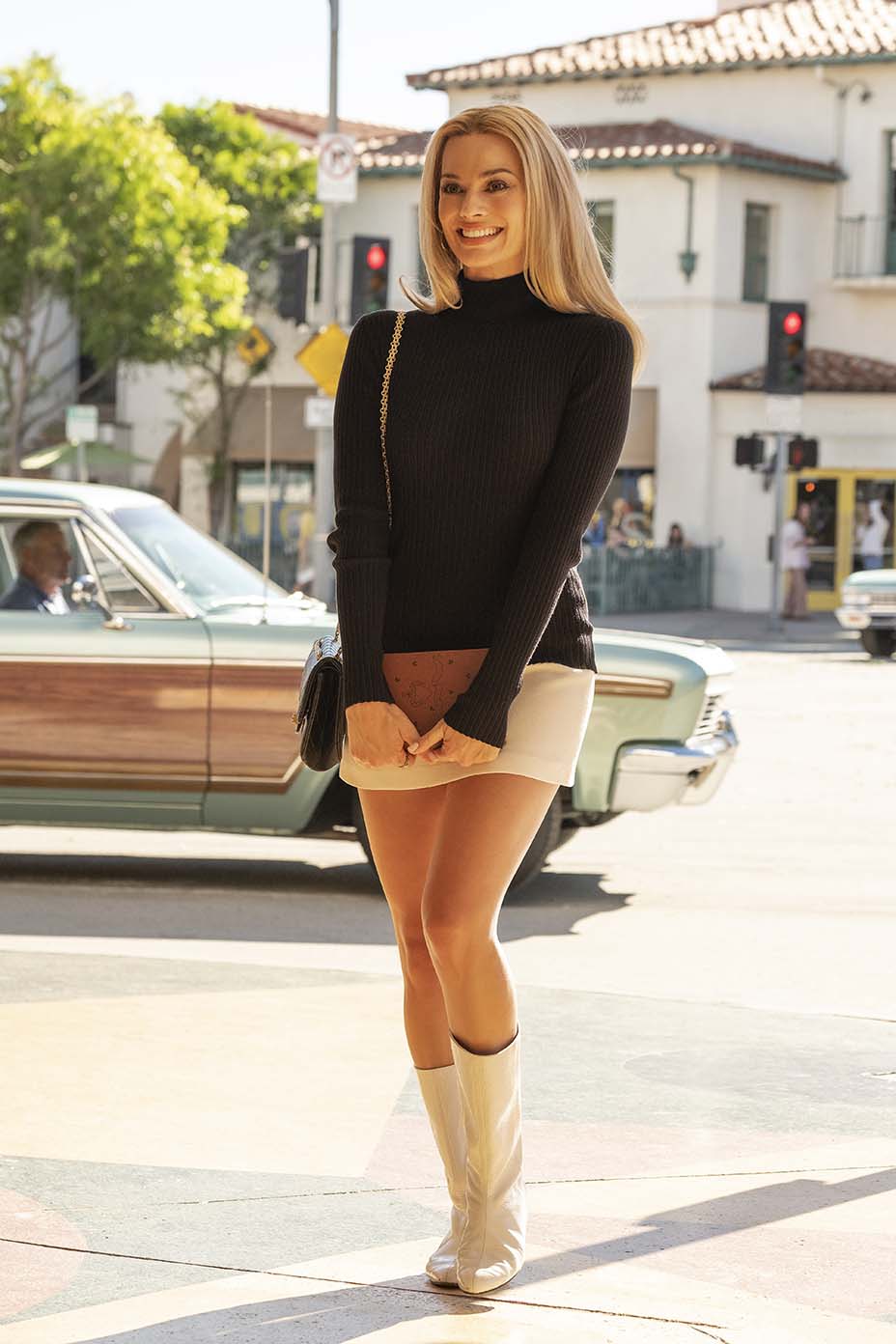 “Charlie Manson walked in with short hair and was clean-shaven,” Thorisdottir says of Damon Herriman, who plays Manson. “Quentin didn’t want him to have a huge beard but to be unshaven and with longer hair, so we wigged him and laid a small beard and sideburns.” Herriman has brown eyes, but in order to make them even more piercing, Thorisdottir implemented contact lenses and yellowed his teeth.

Damian Lewis, who plays Steve McQueen, required a hair transformation in the form of a wig, sideburns and fuller eyebrows. But it was Dakota Fanning, who plays Squeaky, who underwent the biggest makeover for her character. As one of the more well-known Manson family members, it was imperative to Thorisdottir that her look be represented accurately.

“We had Dakota with her beautiful blue eyes, blonde hair, and freckles and Squeaky had somewhat auburn hair and brown eyes,” she says. “So we colored Dakota’s hair strawberry blonde (not too blonde because she had to go back to her show) and we painted freckles and a sunburn over her whole body because she wore a lot of tank tops.”

A seasoned artist who has worked on films such as The Avengers, The Hateful Eight and Captain Marvel, Thorisdottir felt a certain attachment to this film because of the time period and place.

“It was a lot of work, but a lot of people aren’t even going to realize where there was makeup,” she says. “We captured how Old Hollywood was moving out and hippies were starting to move in. It’s just so much fun, and I’m happy that we got to use fantasy and create these looks out of our kit, not prosthetics or CGI to accomplish it.”