While major labels like Calvin Klein and Donna Karan still operate out of New York’s Garment District, it’s not the same bustling epicenter of America’s clothing design and manufacturing industry that it was in years prior. Just in time for New York Fashion Week, the creators of a new exhibition in the area hope to spark a little nostalgia for a golden era before smartphones and outsourcing, when a crew of iconic supermodels ruled the runway.

The exhibit came about thanks to Broadway set designer Gaetane Bertol, who has worked on shows such as Kinky Boots, Tootsie, Kiss Me Kate and The Little Mermaid. In the summer of 2008, Bertol happened upon a box of slides on the sidewalk at the corner of 15th Street and 9th Avenue in Manhattan. “One box was opened with a few contact sheets and a sleeve of slides, and a photo of Ralph Lauren taking a bow at his fashion show caught my eye, and another one of Cindy Crawford,” she tells The Hollywood Reporter.

The box contained thousands of 35mm slides with photos of designers and supermodels taken by Japanese photographer Kitshimitsu Hada. He had left them to his mother, Yuriko Tomita (a fashion journalist who died in 2017), and dozens of boxes housing her professional archives ended up on the sidewalk after a fire in her apartment in 2008. It’s one of these boxes that Bertol stumbled upon and decided to keep safe in a closet of her Park Slope apartment until she could find the owner. That quest took “a few years,” starting with a receipt from a photo development store that listed Tomita’s name and ending when she located Tomita’s granddaughter after a long online search. 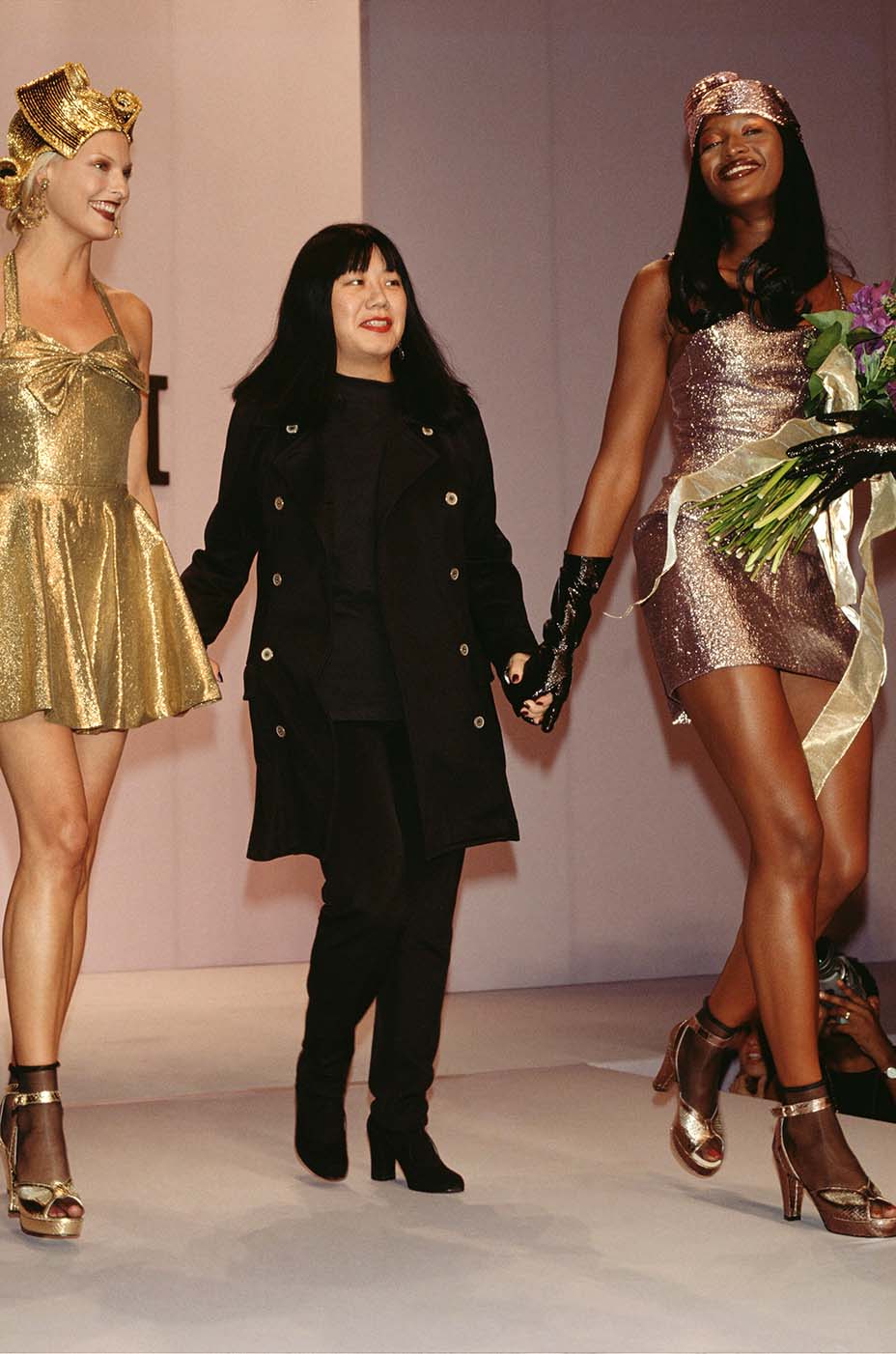 “When I initially looked through the boxes, I thought I would sort through and throw out what I didn’t want,” says Bertol. “It quickly became very apparent, though, that the slides had been meticulously labeled and archived. It would have been a disservice to the collection as a whole to get rid of any of them. I couldn’t throw them out, but I didn’t know what to do with them, either.”

She continues: “Years after finding the slides, I casually mentioned the collection to my friend Tzili Charney. Also a theatrical designer, she immediately saw the value of this collection and suggested a show at her gallery ZAZ10TS, located in the lobby of 10 Times Square, in the heart of the fashion and theater district.” 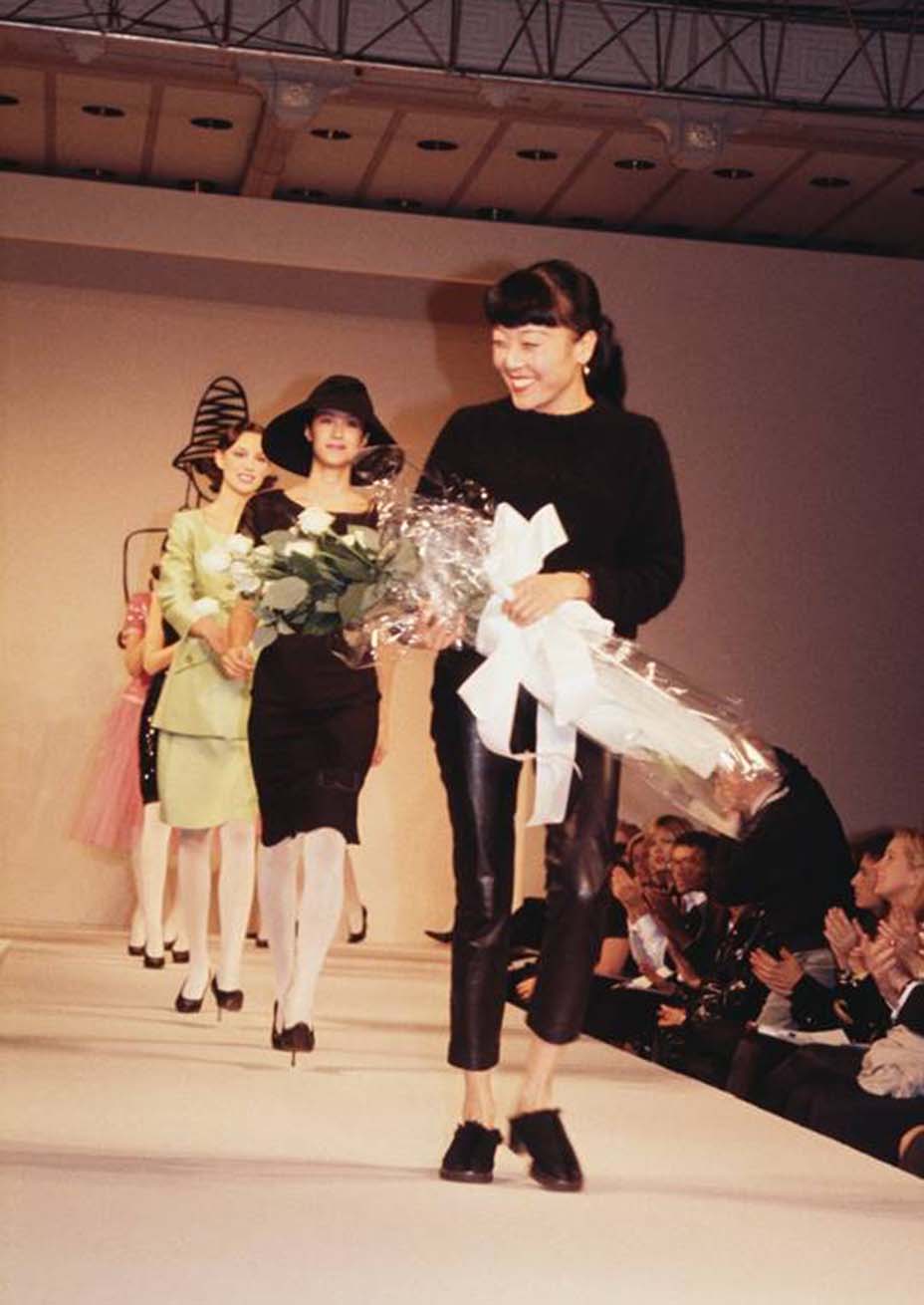 Now, the slides will be on public view. What makes the exhibit more serendipitous is that all of the fashion designers featured in the exhibit once had their offices at 10 Times Square. Liz Claiborne is still in the building today.

To anchor the images in the here and now, Bertol went to David Rockwell, whom she worked with on the scenic design of the Tony-award-winning Kinky Boots, and asked to use a model from the show as part of the exhibit.

“I saw several parallels in the Kinky Boots story and that of 10 Times Square — how buildings and businesses morph with history. So I asked David if he would be kind enough to loan us the model for a playful installation,” she says.

Using a Pepper’s ghost effect to make it feel as if the models have come to life, the photographs become hologram-like, with the Kinky Boots-inspired imagery projected behind them.

The free public exhibition will open Thursday, Sept. 5, to coincide with New York Fashion Week, and run through Jan. 20, 2020, in the lobby of 10 Times Square (also known as 1441 Broadway).