What began in 2010 for Adam Goldberg as a Tumblr blog of Polaroid photos and demo recordings, dubbed “Home: A Nice Place to Visit,” has since come to life as his fourth music album, a 32-page book and now a solo photo exhibition that opened at Show Gallery in West Hollywood on Thursday night. In the multimedia release, the actor-filmmaker-photographer-musician explores the meaning of ‘home.’

At the exhibition opening party, Goldberg — who stars in the upcoming Jason Cabell crime thriller Running with the Devil — performed an improvised set on guitar, vocals and digital loop machines under his music nom de plume,The Goldberg Sisters, with friend and frequent musical collaborator Andrew Lynch of synthpop project Nav/attack.

'The Accidental Getaway Driver' Review: An Unexpected Bond, Examined With Tension and Tenderness

Nia Long on Working With Eddie Murphy in 'You People,' Clarifies "Blackfamous" Comments

Windows of the gallery (co-owned by the musician Poe and John Gheur, founder of the Signature Creative design agency) feature the actor’s original pictures, as well as analog cameras and the audio equipment used to record the album. Each photograph in the exhibit is tied to a song on the recent Goldberg Sisters album (which visitors can hear on a listening station), like the instrumental track “Theme,” channeled by a double-exposure photo of Goldberg and his wife, graphic designer Roxanne Daner, who also designed the vinyl and book package. 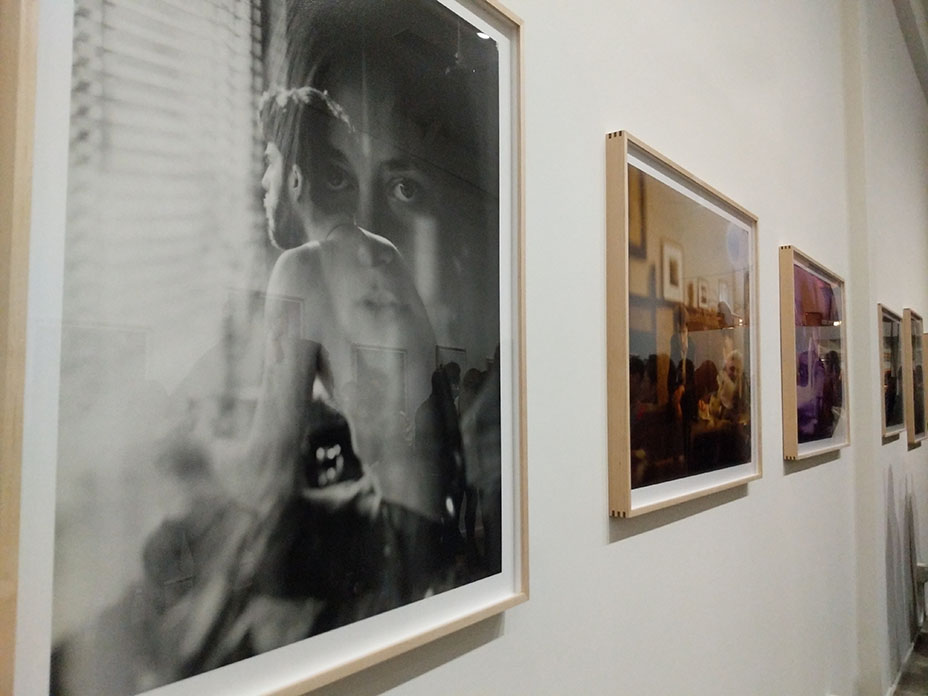 The picture, taken on experimental Impossible Project instant film, is one of Goldberg’s most popular images — “If you use social media as some sort of measuring stick,” the actor tells The Hollywood Reporter. And the story behind it is both happy and heartbreaking: “That photo was taken moments after we discovered that [Roxanne] was pregnant,” he says. “It was an important moment and, strangely, I managed to capture it on what was a pretty difficult exposure. We ended up losing that child at term, actually.” Goldberg recounts the tragic experience in the song, “Sliver of Light (for Bix).”

Another one of Goldberg’s personal favorites is a diptych of a light pink rotary phone (remember those?) with the receiver off the hook. The image and accompanying song, “Words That Rhyme (for John Glick),” pays homage to the photographer’s close college friend who was killed in a car crash 14 years ago. “It’s a song about me attempting to write a song about him on the anniversary of this death every year and being unable to do so,” says Goldberg. “[John] used to call me on every New Year’s Eve because he lived on the East Coast and would tell me what the future looked like — that was the joke.” 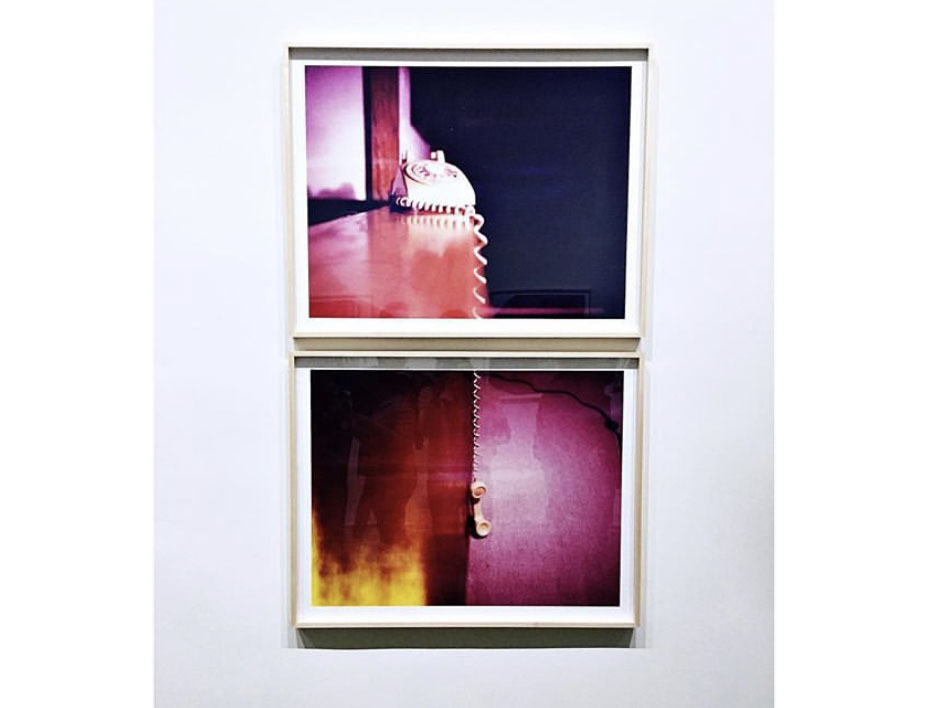 The Santa Monica native has been using his shutterbug skills since childhood and “began taking photographs with a certain degree of seriousness in high school — taking photography, darkroom, classes, contributing to our arts and literature magazine. I’m 48 and still bragging about [that fact]!” he says. “I think my work evolved somewhat exponentially when I began shooting medium and large format in the last 10 years.”

“It’s very similar to filmmaking, which is the art form in which all of these skills and passions coalesce,” says Goldberg, whose directing credits include No Way Jose, I Love Your Work and Scotch and Milk, the first movie he made himself and which was “the purest form of that marriage [of photography, film and music] for me.” The 1998 dramedy was shot in downtown L.A. and released in black-and-white — “scored with all of this jazz music, which is why I couldn’t ever release it properly.”

That first film was the gateway project that inspired Goldberg to further explore his lensing and musical skills: “They’re something you can kind of do on your own, whereas filmmaking requires a lot more moving parts in some ways.”

He continues: “Acting, while still a creative pursuit and certainly a technical one, tends to exercise a very different muscle — if for no other reason that you’re generally trying to interpret someone else’s vision. I very much love the technical aspects of photography, music and filmmaking; I love to edit my films, for instance. I like putting pieces together.” 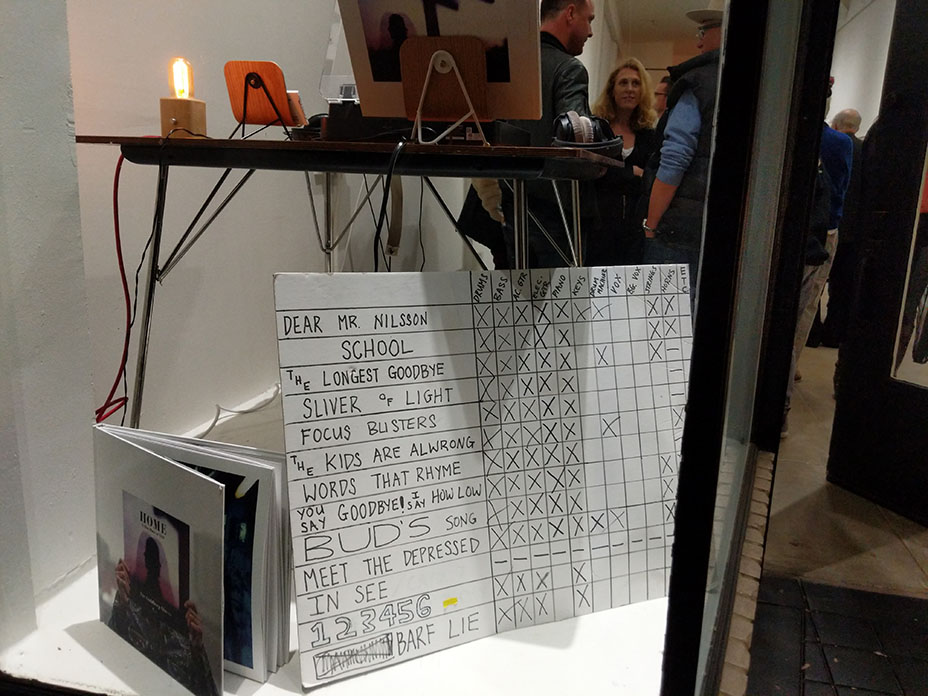 As far as his stage performances as The Goldberg Sisters, Goldberg “sort of retired the live act,” he says. But he’s thinking of another stream-of-consciousness-style, digital-meets-analog show to close out the exhibit. (For the record, Goldberg’s “sister” is actually his alter ego “Celeste,” whom he describes as the “mistress-mind behind The Goldberg Sisters and my better half — Adam is kind of a himbo actor guy, a little too preoccupied with vanity and success to get any real work done.”)

The Home: A Nice Place to Visit album was released digitally last May before being published as a photography book and double vinyl album set ($65) by Hat & Beard Press in November. Next, Goldberg is heading to New York to film God Friended Me, the CBS TV series on which he was recently cast as billionaire Simon Hayes.

“Home: A Nice Place to Visit” by Adam Goldberg at Show Gallery, 1515 North Gardner St., West Hollywood. The exhibition is on view through Feb. 10.