Continue to The Hollywood Reporter SKIP AD
You will be redirected back to your article in seconds
Skip to main content
May 11, 2017 10:37am

Actor and documentarian Adrian Grenier’s latest project comes with a cheeky warning: Be careful of narcissism and navel-gazing. The creative exercise in question is a Nashville hotel suite he was given free rein to curate with art, both his own and that of others.

It’s part of the just-debuted 21c Museum Hotel, the latest in a collection of Southern boutique hotels combining museum-quality art (the 10,500 square-foot contemporary collection is open to the public seven days a week, free of charge) with cultural programming and culinary experiences. 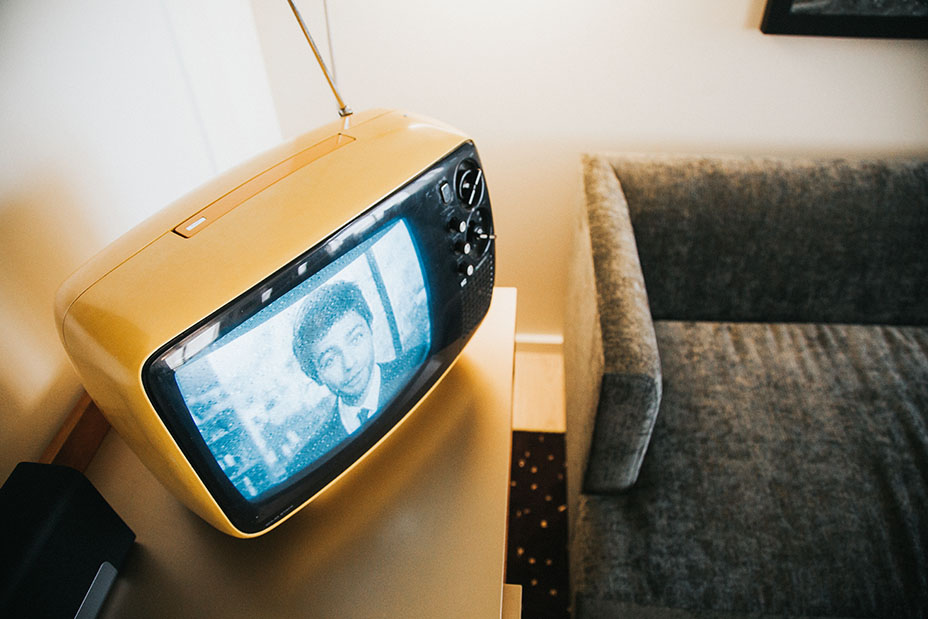 Grenier is one of three artists invited to participate — the others are rapper Yung Jake and visual artist Sebastiaan Bremer. The deal came about through a friendship with hotel co-founder Steve Wilson.

Indulge Your 'Yellowstone' Obsession at These Six Sprawling Ranch Escapes

“I was telling him about a project I’d done a while back called Teenage Paparazzo and the art I’d created and how I’d started to accumulate so much I needed to open my own hotel,” relates Grenier of the collection he says features art “which was basically designed to get people off their digital media devices and active into three dimensions, having conversations in real time with real people.” Wilson’s response: “‘Don’t do that, why don’t you just curate one of the rooms at the new hotel in Nashville?’ So I did,” says Grenier. 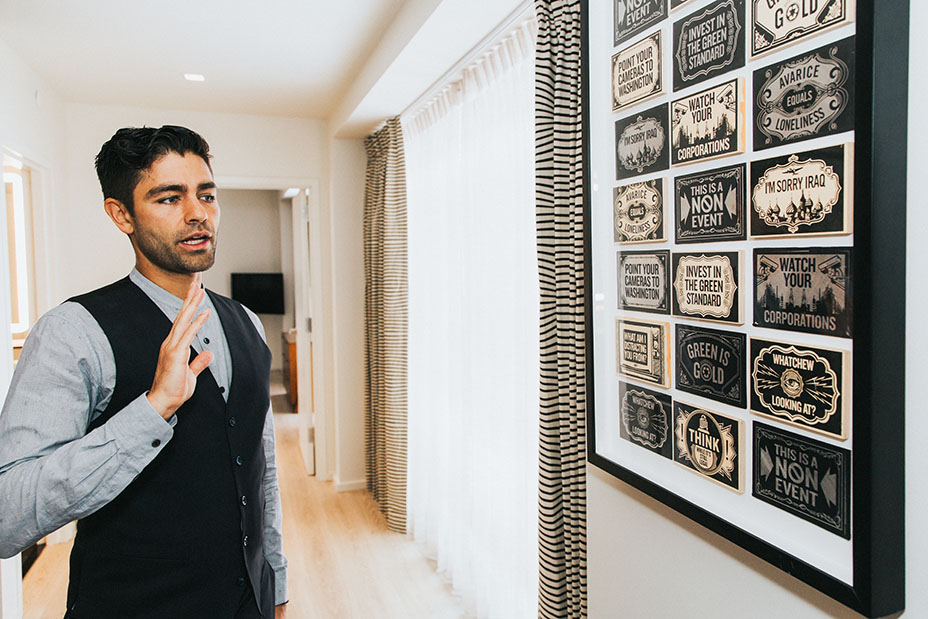 While the actor didn’t have a hand in the interior design of his minimalist grey-and-white suite, he hand-selected every multimedia art piece inside it, which includes photography, prints and a vintage analog TV that plays an hour-plus of content “all riffing on the same themes — some deleted scenes from Teenage Paparazzo, as well as some short films I had artists make all talking about the themes of media identity and celebrity.” There’s a collection of placards Grenier made in collaboration with Shepard Fairey that he’s held up to paparazzi taking his picture in the past; they say things like ‘This is a non event,’ and ‘Point your cameras at Washington.’ And though they were made years ago, they’re incredibly relevant still.

“Usually when paparazzi take your picture, it’s a one-way conversation,” says Grenier. “So I was trying to reinsert myself into that conversation by taking charge in that moment, and I would hold up one of the placards, taking that moment and making it my own. I really enjoyed that because it was very experimental in its time and now it’s here for everyone to see.” 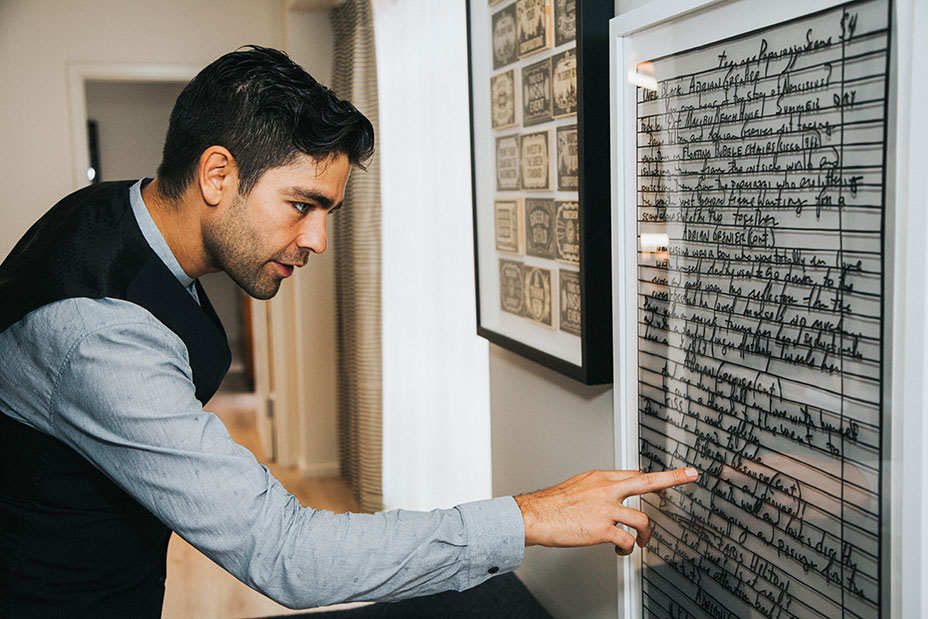 Another favorite piece of his is a classic painting of Narcissus by John William Waterhouse (Echo and Narcissus) that was re-appropriated by Grenier’s buddy, Tim Kent, a “fantastic painter” who “went to town painting over and on top of it with paparazzi lurking in the bushes and climbing over each other to get the shot of Narcissus’ fatal blunder.”

All the pieces return to the theme of self-reflection, how we’re viewed and how we interact with media. Grenier feels today’s focus on social media causes some to “retreat into the safety of the channels that confirm our own bias and reflect our ego and identity.” It’s a new time, he says, and it’s interesting to watch who’s considered famous. “Now that we all have access … what do we do with that power?” wonders Grenier. “Are we going to use it for something positive and uplifting and healthy for our society, or are we going to seek the same narcissism and attention and ego that classic celebrities have?” 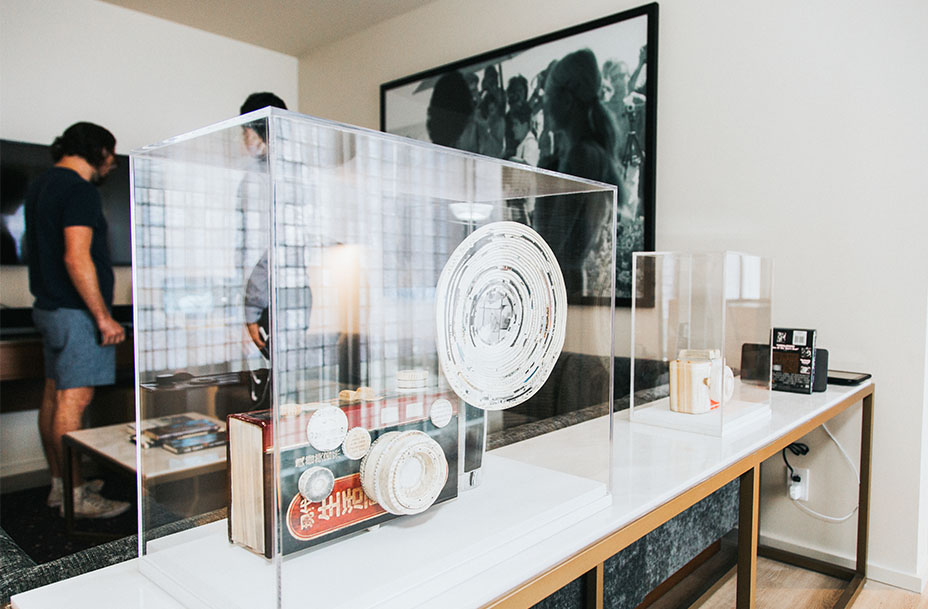 While Grenier’s art poses interesting questions, he also hopes the suite is fun. “One of the best things about 21c is it not only the art first, but the design, and the food is always good and the vibe is great,” says the actor, who also recommends hiking in nearby Percy Warner Park. Grenier has enjoyed spending time in the music capital, which has included touring there with the band he manages, The Skins.

“I just keep coming back for the music, mainly,” he says. “We went to Broadway last night and perused all the classic bars that we know and love. It’s an up-and-coming burgeoning town with a lot of newness.” 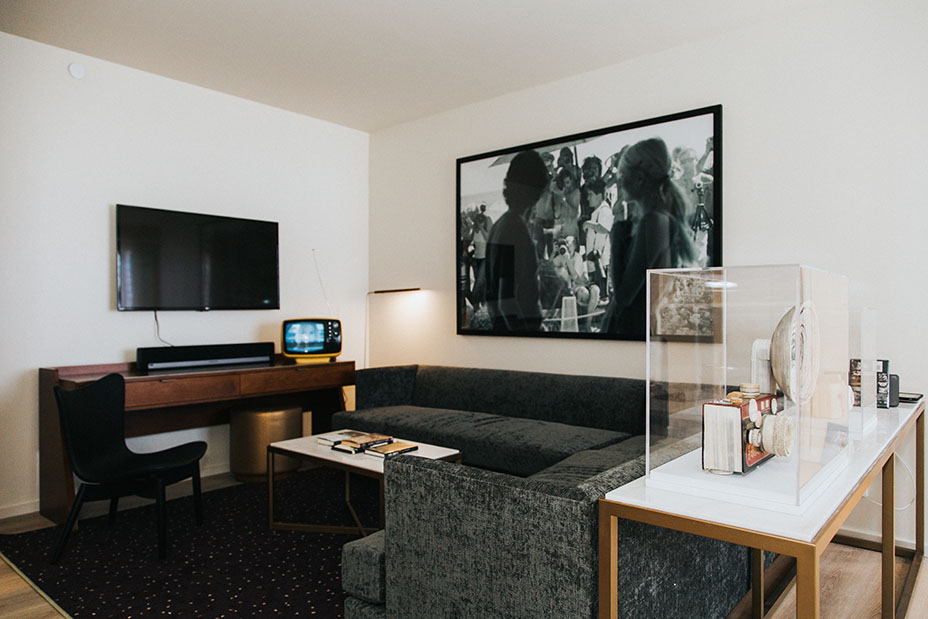