Many stars resemble today’s average bride in at least one respect: They can’t wait to share photos of their engagement ring on Instagram.

Jennifer Lopez, Sarah Hyland and Katy Perry are among the women who recently have confirmed that they are betrothed by posting images of pricey rings on the social-media platform, which has been a game-changer for the jewelry industry.

“Instagram really built my business,” says Mia Moross, whose love of vintage and antique jewelry inspired her in 2013 to launch the retail business The One I Love NYC, which caters largely to private clients and appointments versus the traditional retail model. “Probably 50 percent of new sales have come through Instagram, and there are some years in which it’s been higher.”

Last year Zoe Kravitz spotted a ring she loved on Moross’s Instagram feed, and a friend gave a head’s up to the Big Little Lies actress’s then-boyfriend, actor Karl Glusman (the pair have since married). Moross dates Kravitz’s one-of-a-kind gold ring, which features five rose-cut diamonds totaling between three and four carats, to between 1800 and 1820.

“Both the size of the diamonds and the metalwork in that piece are incredibly hard to find from that era,” she notes. Kravitz has since become a client, purchasing a gold and diamond necklace she was seen wearing in mid-July. 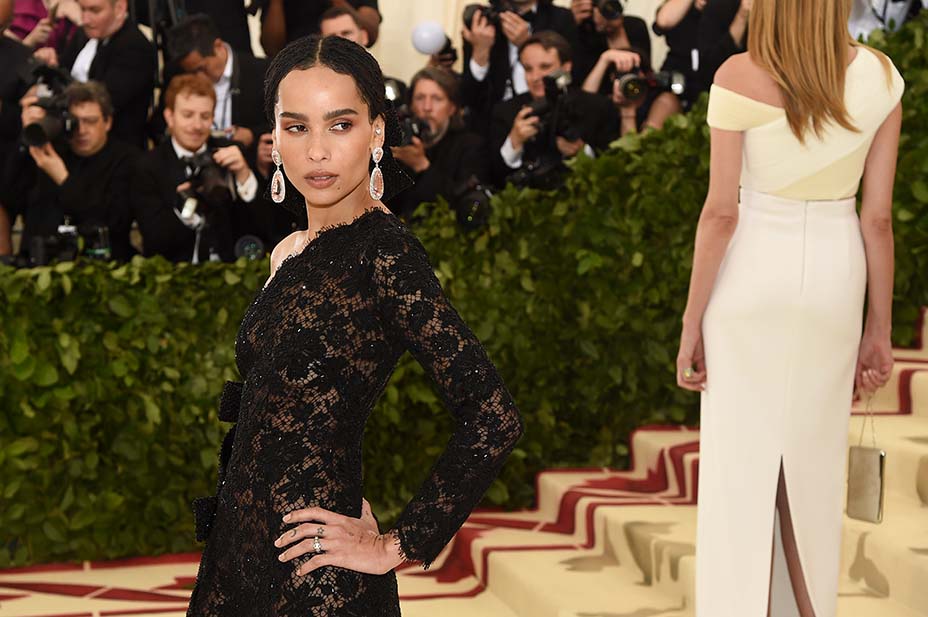 Unsurprisingly, many Hollywood brides choose a more low-key route, wearing their engagement rings in public without any fanfare preceding the moment. That’s the case with Jennifer Lawrence, Scarlett Johansson and Rooney Mara, each of whom has turned up in public recently sporting a special ring on the left ring finger. Lawrence was first spotted wearing her emerald-cut diamond on a platinum band at the Dior fall/winter 2019 fashion show in Paris in February, while Johansson debuted her ring on July 20 at San Diego’s Comic-Con. 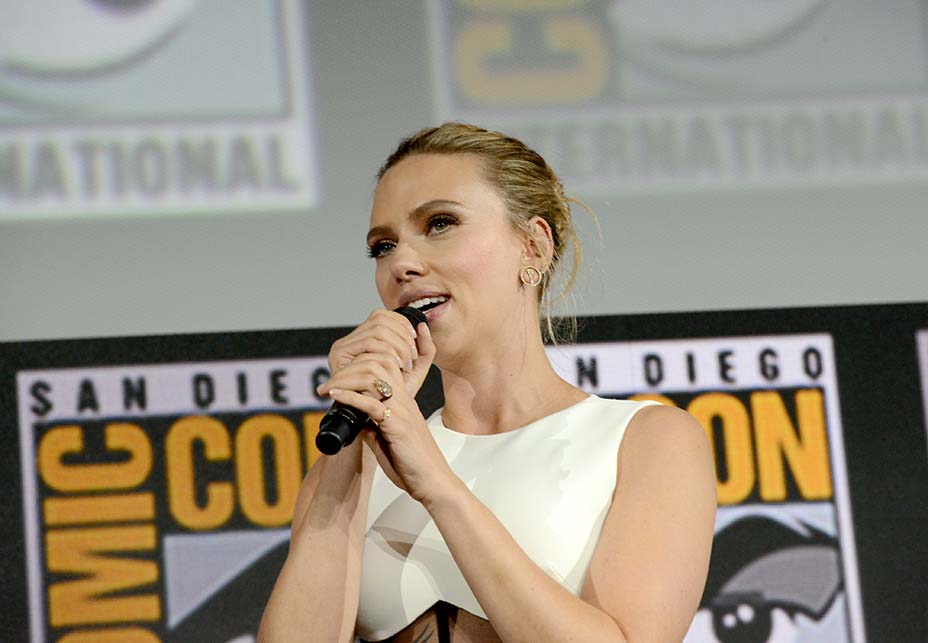 While Johansson and fiancé Colin Jost have remained mum on details about her ring, it’s widely believed to have been crafted by New York-based designer James de Givenchy, who founded the jewelry brand Taffin in 1996. Givenchy (nephew of the late couturier Hubert de Givenchy) posted an image of a ring identical to Johansson’s on June 29, describing it as a type 2A light brown diamond weighing 11 carats, shown artfully set on a curved yellow-gold band that’s been treated with a black enamel or ceramic. (A Taffin spokesperson declined to confirm details, citing client privacy.)

“I absolutely loved Scarlett’s ring — it’s not just that it’s gorgeous, but it’s also an interesting purchase because it’s really stepping out of the box in engagement ring design,” says Susan Abeles, head of jewelry for the Americas for Phillips, the London-based auction house. “It’s a design that blends ideas of old world and contemporary, but it’s also built around showcasing that really beautiful stone. Engagement rings reflect a bride’s personality more than ever, and that’s certainly true of this ring, which really seems like an extension of Scarlett’s personality and her style.”

Mara and rumored fiancé Joaquin Phoenix always have been an intensely private pair, so it’s little wonder they haven’t yet confirmed their engagement. Since late June, Mara has been spotted running errands while wearing a classically simple ring that Abeles says looks to be crafted of a round brilliant diamond weighing between two and three carats, flanked by tapered baguettes and set on a platinum band.

“If you look at all of Rooney Mara’s recent appearances [on red carpets], she is rarely wearing any jewelry,” Abeles points out. “So it wouldn’t be surprising that she would want something that isn’t showy, but rather is very simple and understated.”

Also choosing a round brilliant diamond: Ozark’s Julia Garner, who became engaged to Foster the People lead singer Mark Foster in late April. “The mounting is really lovely on her ring; it’s a very nice platform to showcase the diamond,” Abeles says of Garner’s platinum design, which she calls “a fresh twist on a classic diamond engagement ring.”

Insecure’s Issa Rae, meanwhile, has been seen since late March wearing a cushion-cut diamond from longtime boyfriend Louis Diame, which Abeles estimates at between two and two-and-a-half carats, surrounded by a halo of diamonds on a platinum band with a split shank.

“Cushions are quite nice stones that were very popular around the turn of the last century,” Abeles adds. “People who choose cushion-cut diamonds tend to like that old-world connection. The same is true of a ring like Katy Perry’s, the ruby surrounded by diamonds set in yellow gold, a style that I call a cluster that definitely feels old-fashioned.” 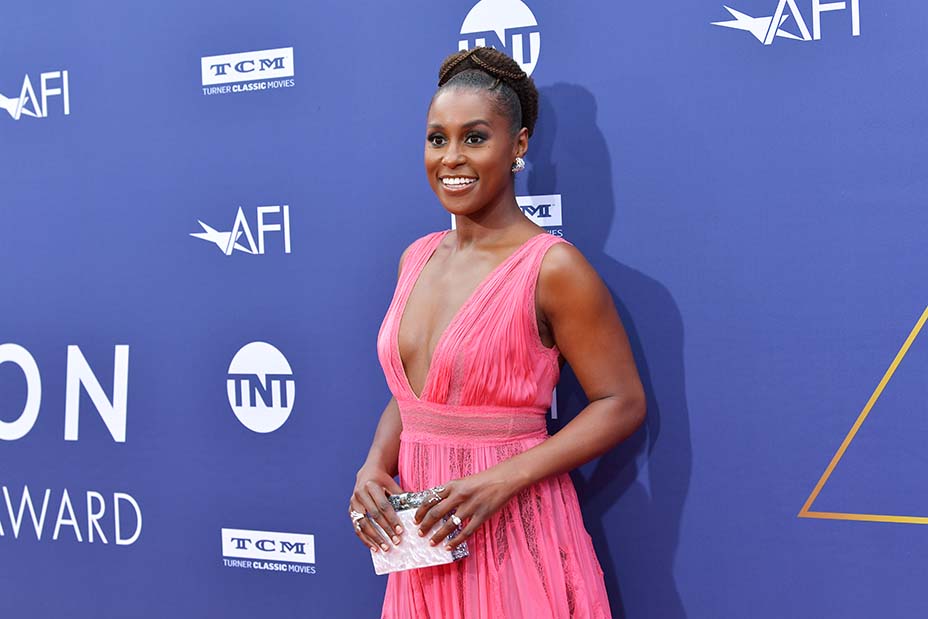 From vintage to custom, are designs worn by Hollywood A-listers driving engagement ring trends? “Without a doubt, 110 percent,” Abeles says. “They play such an important part in the conversation, because we hear women say, ‘I want a ring like Jennifer Lopez’s.’ Or for a ring like Scarlett Johansson’s, someone might say to me, ‘I want to understand that ring; I think it’s beautiful, what can you tell me about it?’ Women are so much more involved in this purchase than they used to be, and they’re determined to get something they will love wearing every day.”

Such was the case with Hailey Bieber’s engagement ring, a custom design by Jack Solow, a third-generation family member of New York-based jewelry firm Solow & Co.

“There’s no question that Hailey’s ring has inspired other brides,” agrees Solow, who worked with Justin Bieber to craft the custom sparkler, which features an oval-cut diamond weighing between six and 10 carats and is set on a yellow-gold band. The latter detail was important to Hailey, Solow says: “She is very fond of yellow gold, which is perceived as sportier than white gold or platinum,” he explains. “But if you wear yellow gold every day, why would you change that for the most important piece of jewelry you’ll ever wear? Justin had a lot of input in the ring, but more than anything he wanted to create something that she would love and felt very personal for her.”

In mid-July, Hyland posted details on Instagram about her engagement to former Bachelorette contestant Wells Adams, including a look at her oval-cut diamond ring by Lorraine Schwartz, who has provided jewels to the Modern Family star for awards season events, including February’s Vanity Fair Oscars party.

Estimated at five carats, the ring design is all about showcasing the beauty of the stone, Abeles says. “Oval diamonds have a lot of similarities to round diamonds, but a woman might think about how her mother or grandmother wore a round diamond, and she’s seeking more of a fresh, new look.”

Blinded by the ?? or the

If Hailey Bieber kicked off the trend, Hyland is sure to keep it going, Solow says. “There’s definitely been a surge in demand over the last year for ovals, and the social media [from Hyland’s ring] likely will create a stir,” he affirms. “But beyond the idea that you might be inspired by a ring worn by a celebrity, you still want it to feel personal, and there are so many ways to do that these days, from side stones on a three-stone ring or a halo of diamonds around the center stone or a micro pavé around the shank — there’s quite a lot of choice and creativity in today’s personalization of a ring.”

Abeles agrees. “I always tell people to get the ring that feels most like them, and these days there are many ways to make that happen,” she says. “No matter who you are, what every bride has in common is that she needs to love her ring and want to wear it every day.”