Joseph Altuzarra came home Saturday afternoon, showing his runway collection for the first time in Paris — the city where he grew up — and at a 16th arrondissement school, which was appropriate enough for a Paris Fashion Week newbie.

“I’m French, and we’ve been thinking about showing in Paris for at least three years. But we wanted to wait for the right time. It’s also a business reason,” the designer told THR of his eight-year-old brand’s plans. “We’re looking to international growth for the next stage of expansion. Because we show in New York, people see the American side of the brand, but not the French side, which is part of what I draw on.” 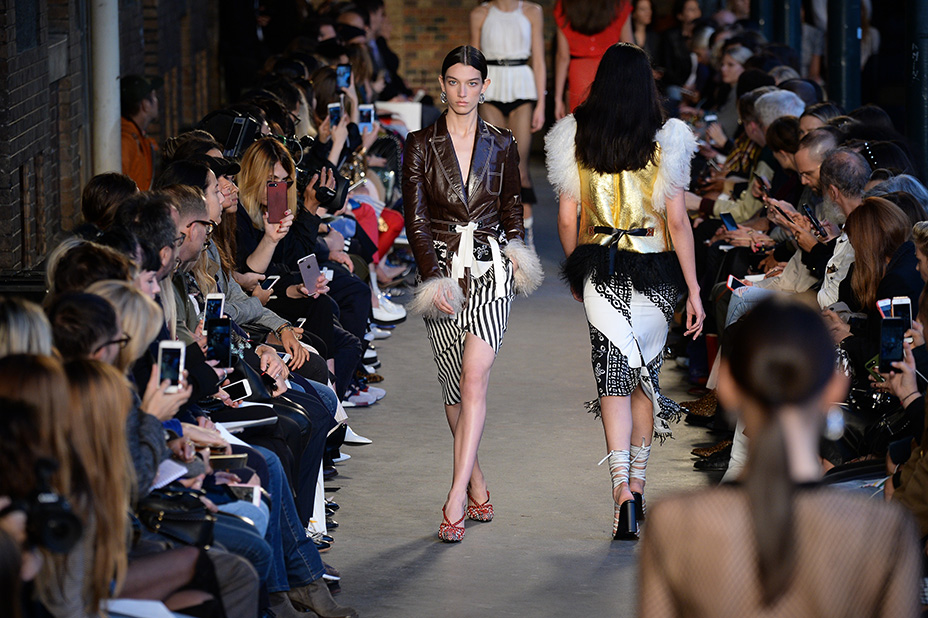 Indeed, you could see both sides from the very first look, a red bandana print dress with a black fishnet overlay. Throughout the collection, Altuzarra built on the DNA of his brand, mixing covetable knitwear, sleek leather blazers and boxy boho jackets with craftsy touches such as tassel, fur and pompom accents and ribbon ties, with his signature body-conscious, side-slit skirts and dresses. His shirt dresses (Reese Witherspoon recently wore one in a red floral print) were here, too, in fringe-trimmed eyelet, worn underneath said jackets.

Altuzarra, one of THR’s top 20 red-carpet designers of 2017, who was photographed for the issue with his pantsuit muse Evan Rachel Wood, showed a softer side of tailoring for spring, including fluid black trousers worn with an elongated, sleeveless jacket with a hem trimmed in crystals, and also for cocktail hour, dresses that combined metallic macrame bodices with sequined skirts.

“We’ve tried to play in the classic evening wear world before, and frankly there’s a lot of money in it now,” Altuzarra said when he was in L.A. in August. “I’m more interested in real clothes for real people.”

When it came to dressing Wood in pantsuits for all of the 2017 awards show season, he added, “We had no idea it was going to be as big as it was. It was the perfect storm with what was going on in the U.S. politically and in Hollywood with equal pay. We got a lot of emails from people who were really touched by it. And it was amazing to be able to dress someone on the red carpet in clothes people can buy. It was a democratic thing.” (And yes, you can buy a tuxedo like the one the Westworld star wore on the red carpet, and the style is actually named The Evan.)

Evan Rachel Wood and Altuzarra: The Power Suit Is 'Antiquated'

Despite his tony 16th arrondissement runway show locale, Altuzarra, the child of a Chinese-American mother and a French father, is a Left Bank person at heart. He grew up in the 7th, roaming the floors of Le Bon Marche department store nearly every day, and his must-visit restaurant in his old ‘hood is Le Recamier for souffle. Perhaps next season, he can move the show even closer to home.