From the exaggerated, padded-shouldered “power dressing” defining Balenciaga creative director Demna Gvasalia’s recent spring-summer 2020 ready-to-wear show to the theme of the rivalrous glamour characterizing the FX series Pose, the influence of Gilbert Adrian is in the air. Amidst the revival of a look evoking the sharply tailored style and flamboyance associated with the famed costume designer — who wardrobed MGM classics such as Dinner at Eight, Grand Hotel, The Philadelphia Story, The Wizard of Oz and The Women — comes the book Adrian: A Lifetime of Movie Glamour, Art and High Fashion (Rizzoli, $65), due out Nov. 5. 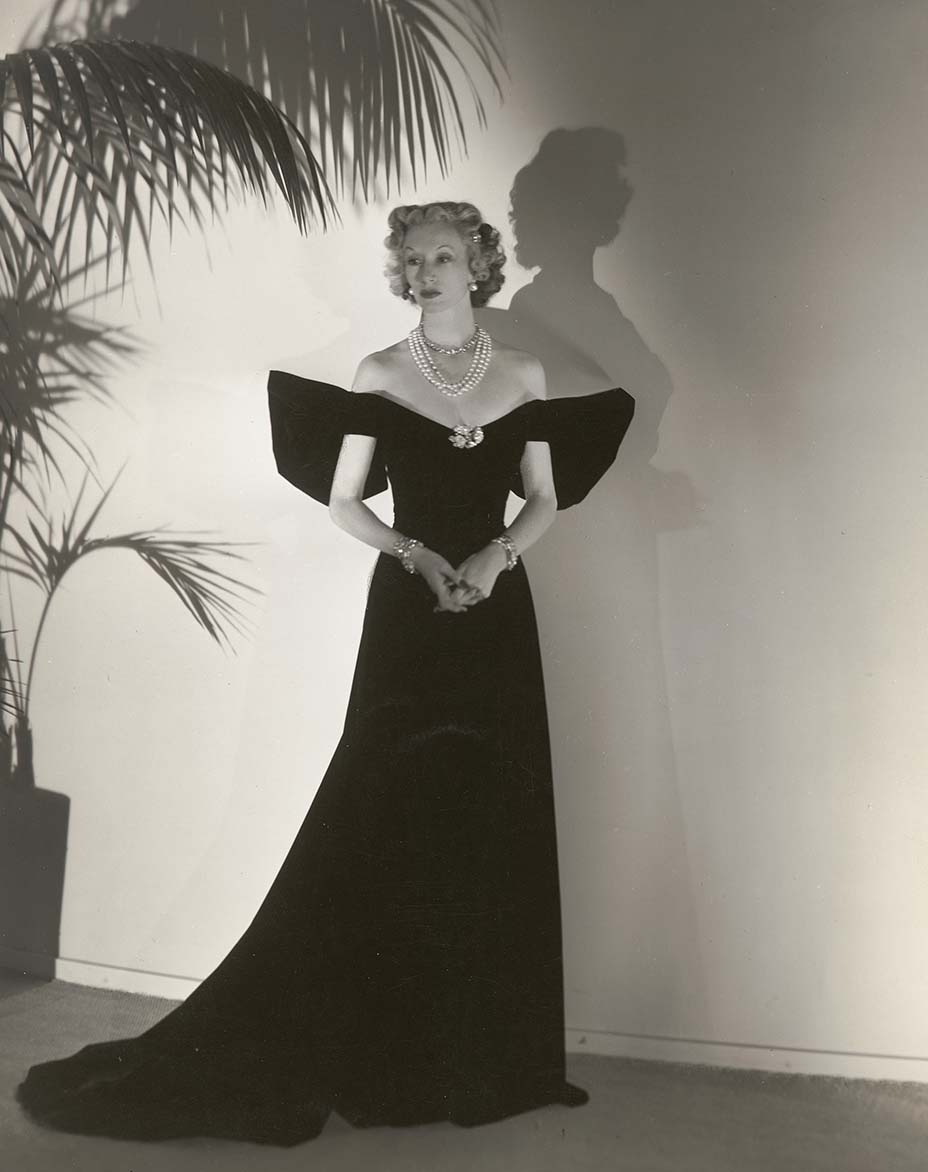 The most extensive book to date on Adrian (who successfully transitioned from film to fashion by 1941, opening a Beverly Hills salon the following year), the tome pays tribute to his fantastical MGM handiwork and offers a complete assessment of the career enjoyed by “Hollywood’s highest paid couturier,” as he was known in his heyday.

Adrian was a polymath. Featuring previously unseen images, including his lavish sketches and Surrealist-inspired paintings (culled from the collection of the author, historian Leonard Stanley), this extensive study also displays a trove of archival photography and magazine articles chronicling the striking décor he conjured for his homes in and around Los Angeles. Among them, a rambling, New England-style farmhouse set amidst San Fernando Valley’s Northridge neighborhood and a striking Burton A. Schutt modernist Bel Air abode. Adrian shared these dwellings with his wife, Janet Gaynor (the first best actress Oscar winner who starred in David O. Selznick’s 1937 production of A Star Is Born), and their son, Robin Adrian. 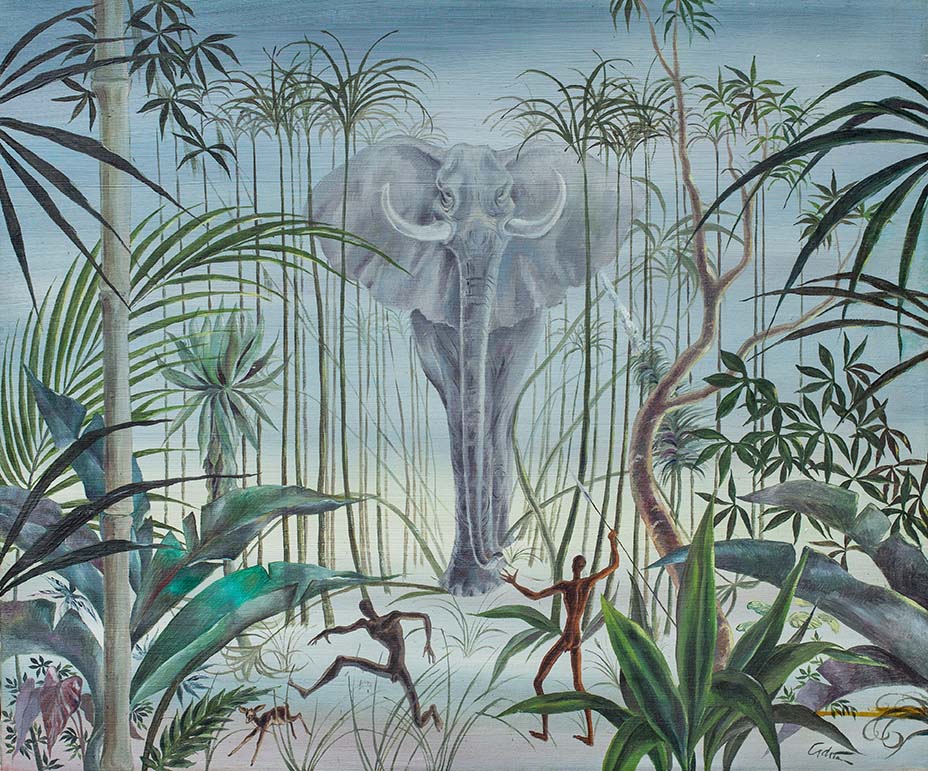 Adrian’s own personal observations about his family and friends, including Millicent Rogers and Loretta Young, as well as his far-flung travels (he and Gaynor sailed down the Nile in 1949), have been sourced from his unpublished memoir. Adrian commenced work on the manuscript after suffering the first of a series of heart attacks in 1952. (A fatal one came seven years later.) Meanwhile, he closed his Beverly Hills fashion house and retreated with Gaynor to a ranch in Brazil’s central-west region. “Adrian was a renaissance man,” notes Robin Adrian in one of the book’s essays, “My Father.”

Robin Adrian spoke to The Hollywood Reporter about growing up amidst Old Hollywood opulence, his dad’s fastidiousness and preference for power shoulders, his rivalry with Christian Dior, and the relationship Gilbert Adrian and Janet Gaynor shared.

Did your father intend to publish a book during his lifetime?

He wrote a manuscript. He had been encouraged by people to write it, and he wrote a lot of it when he was [living in Brazil]. But he never did anything with the manuscript; it was not a big deal. Then he died unexpectedly. Whether he would have ever published a book, I really don’t know.

What do you remember most about him?

He was very wise and knowledgeable about a lot of things. He did things with a certain style and flair. And it was important to him that everybody looked their best at all times. I never saw him around the house looking sloppy. He always wanted to look well put together. That was important to him.

Did he have a particular taste or preference for specific clothes?

No. But his casual clothes always looked well put together. He passed that on to me. He also said that both of us had olive skin and, because of that, we would look best wearing light blue. He said: “Don’t wear muddy colors that are unbecoming.” The word he used all the time was “becoming.” He would always say: “Wear something becoming.”

So was he the family stylist? Did he determine the clothes that you and your mother wore?

Pretty much. My mother always said, “Hey, he has got such great taste, I’m just gonna go with what he says.” She felt that decorating the house and picking out clothes — that’s what he was the best at.

Was it hard living with his fastidiousness?

The only thing that ever bugged me as a kid was having to get cleaned up a bit for dinner. I’d be playing neighborhood football and I’d have to take a shower and clean up and come to dinner looking decent. We did eat around a table together at dinner. But you have to think of the era — TV trays came later. We had a formal dining room. And we had a more casual eating area. As a family, we ate in the casual area.

This book features the family homes that Adrian created in Northridge and Bel Air. Why were these homes so special?

Northridge was up on a hill surrounded by 10 acres. It overlooked the whole San Fernando Valley — at a time when the valley was not covered with houses. We looked down on a horse ranch, which was beautiful. Now it is all housing developments, as far as you can see. But back then, there was nothing — just flat land and rolling hills. We had horses and fruit trees and a vegetable garden. Three ranches went up in 1947 and we felt that it was starting to get crowded, but [the ranches] were probably built on about 100 acres each. We lived in Bel Air from the time I was 11 until 18. By then, I was old enough to appreciate decorating. 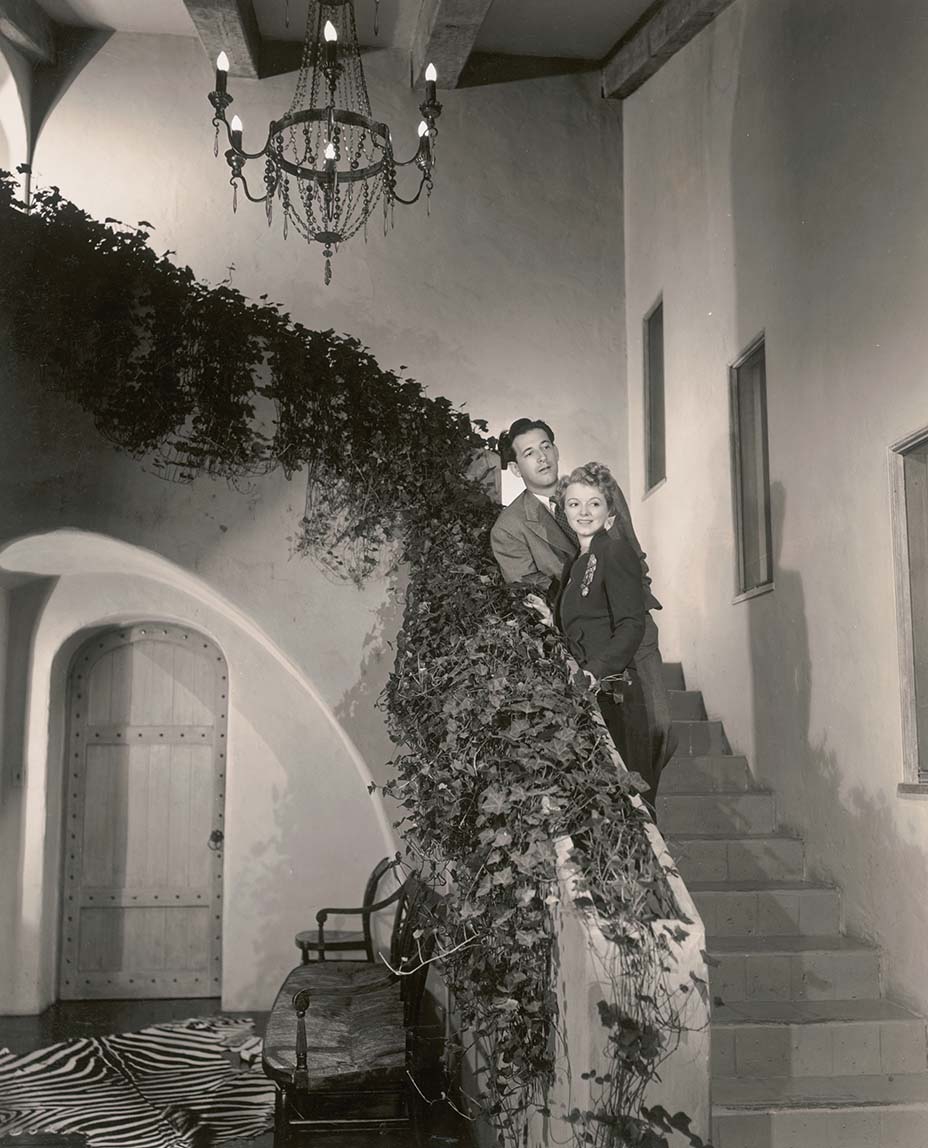 What did you like best about the Bel Air house?

The living room. My father was very eclectic and he always had a mixture of things when he was decorating. Like he had a ton of stuff that he brought back from Africa — various artifacts. And then over the fireplace was this Grinling Gibbons [wood] carving, which was elaborate. I don’t know my antique chairs — whether [the period was] Louis XIV — but he had that sort of thing, mixed in. And the living room kind of opened into a lanai sitting area. And in that lanai were pieces of modern furniture by T.H. Robsjohn-Gibbings. The end tables amidst that modern furniture were two giant African drums. And they worked! They were covered with zebra skin. I remember that he painted the walls a very, very pale turquoise blue. It had a touch of green, but it was so subtle. That tinge, he felt, would set off the artwork better than pure white.

Do you remember the first time you saw The Wizard of Oz?

I think I saw it possibly in a screening room at somebody’s house. We had friends who had screening rooms and all that kind of stuff. Maybe I was 6 or 7.

Were you conscious, growing up, that your father was the costume designer of The Wizard of Oz?

I was told that, yeah. But I really didn’t know that much about what he did at MGM because he had left MGM by the time I was born [in 1940]. At that age, I was not going to appreciate [Greta] Garbo. When I was first conscious of his work was when he owned the building that became Robinson’s department store in Beverly Hills. He bought that building [to house his fashion business]. He had this giant office and there were bolts of material everywhere. There was a showroom, where they actually sold the gowns. His area — and the business offices, the cutters and fitters — were in the back. The entrance was on Beverly Drive. The parking lot stretched all the way to Wilshire Boulevard. It was a big deal for me to go in there. And we’d go in the back alleyway rather than through the front entrance to see him.

Was he a smart businessman?

Well, my mother would say that she was the one who had to put the clamps on him because if he saw a piece of art — or something that he thought was beautiful — he’d want to buy it. So I don’t think he was the best in the world with a budget.

What else do you remember about his career as an independent fashion designer?

How fast he worked. What also got me was his talent as a multi-tasker. I heard that when he left MGM [in 1941] that they replaced him with three people.

When Adrian was designing independently, there was a notorious rivalry between Los Angeles designers and Paris couturiers. Did he ever feel he did not get the recognition he deserved from New York fashion critics and Vogue because of their fixation with Paris?

He felt that the New York critics just fell in line and thought that if [something] came from Paris, it had to be good. Adrian said that was just not true. I don’t know if he was looking, for himself, to be recognized. He really wasn’t egotistical. He went to war with Dior and the New Look because he felt that women should wear things that were becoming, and he felt that women, especially as they got older and had kids and their hips started to spread, that [their figures became] more pear-shaped. That’s why he did the broad shoulder look that he was famous for. He said that it balanced the hips and lent [a woman’s figure] a better proportion.

Was your mother Adrian’s muse?

I don’t know if I’d say that. I think she was a great counterbalance to him. She was more practical than he was. They just complimented each other very well. She was a very wise person. She was far more practical and a lot tougher than the roles she portrayed onscreen. She was always this poor, helpless little waif in the movies, and she was anything but that. She was very strong.

Did she wear Adrian exclusively when your father was alive?

She did when they went places. But Jo Lathwood [the Santa Monica-based designer who created sportswear for Saks Fifth Avenue, Neiman Marcus and Cole of California] made a lot of her clothes. I don’t remember her wearing skirts that much, unless she was going out. She wore slacks a lot of the time with jackets. She had extremely narrow feet. So she always had her shoes [custom] made.

What happened to her clothes?

She just got rid of stuff, not knowing that they would be collector’s items. When she and [producer] Paul Gregory got married [on Dec. 24, 1964] and they moved to a ranch in the desert, she probably just kept a few [Adrian originals] because they didn’t do a lot of formal stuff. The big parties, and all of that, were kind of over.

Did she ever say what she wore accepting the first best actress Academy Award?

No. Maybe because that was before my father’s time.

Did you see Lady Gaga’s performance in A Star Is Born?

Yes. I thought it was very well done. They didn’t try to remake the original. It was all about the music. I liked it.

How did your father inspire you?

He said, “Live life to its fullest.” And I think I’ve done that.