Thanks to baseball, designer Katie Hodges had three months to renovate and furnish Los Angeles Dodgers second baseman Chase Utley’s new Westside home before his family’s October 2017 move from a Beverly Hills rental. (The Utleys had rented for two seasons to ride out the risk of being traded before retirement, which Chase announced in July.) “I have this timeline where if I buy a house, it all goes with baseball,” says his wife, Jennifer. “When baseball’s over, I like our family to be in a home environment.”

Says Hodges, whom Jennifer found on Instagram, “It was game on from day one — there was nothing left untouched” after turning the 1930s four-bedroom, 3.5-bath, 4,100-square-foot Monterey Colonial from a 1970s-era “dingy” residence into a family home whose “language” is “moody, not trendy, and keeps ’em guessing.”

Jennifer knew the house would not be a “forever home” since they move often, previously living in Philadelphia and Gladwyne, Pennsylvania (Utley played for the Philadelphia Phillies from 2003 to 2015) and a Hamptons-style home in Sausalito. 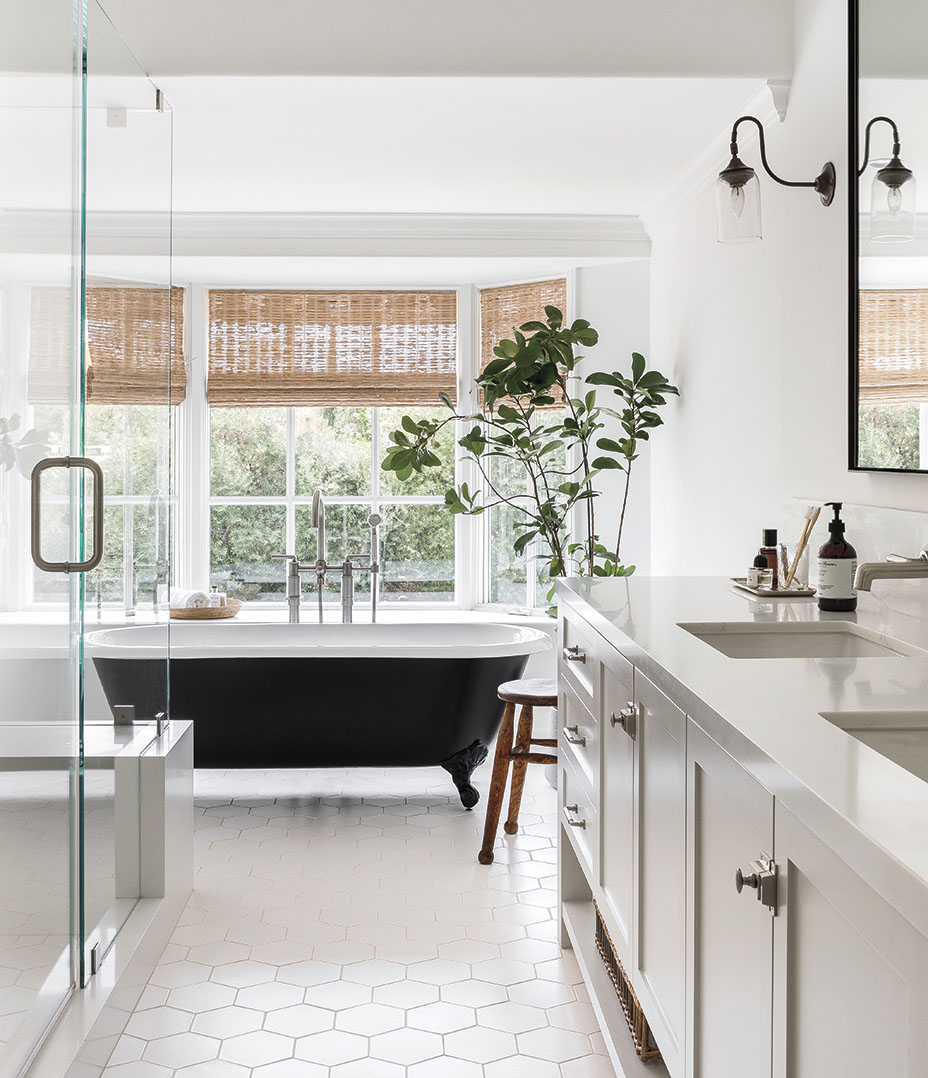 For the current house, Jennifer, 40, prioritized for her sons, ages 4 and 7, with a big backyard pool and pool house, complete with television, full kitchen and couch. They knocked down a wall in the one-bedroom unit, where Chase, 39, watches The Walking Dead and Barry, though he says that, lately, “I don’t have much time to watch TV.” Guests — like Dodgers third baseman Justin Turner, a friend — also can gather on a wisteria-laced patio featuring a worker chair from Amsterdam Modern’s L.A. store, which offers midcentury modern furniture from Holland, along with a coffee table from L.A. design studio and boutique Nickey Kehoe. “We wanted something that was comfortable and not stuffy that works for our boys,” Chase says.

From the backyard, the house can be entered through restored stained-glass double doors (a controversial keep, with Chase saying, “We should have torn them down”) into the living room, which the kids call the “rainbow room,” because of how light filters through the pale rose and mint green glass. 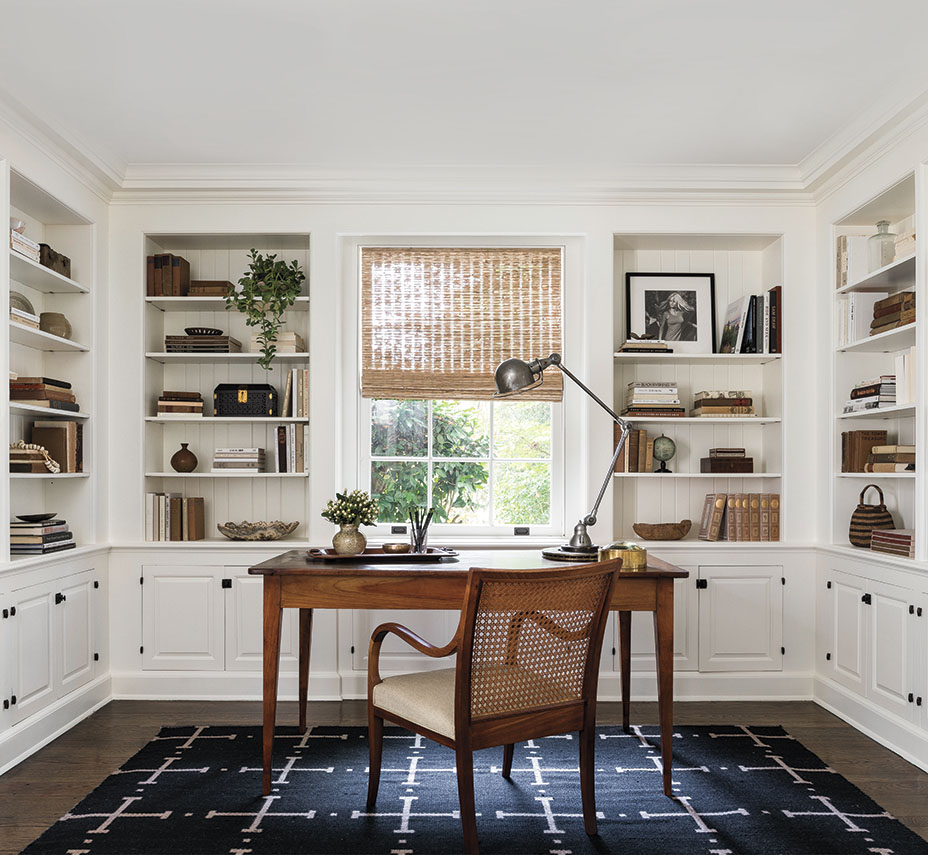 The space exemplifies Hodges’ lean toward natural textures: “I kept coming back to neutrals, wood tones and variations in texture.” The custom-made sofas are “owned” by pitbull Jack, Hodges says, and adjacent to two leather vintage safari chairs shipped from Sweden. “I knew there’s got to be some leather in here, but we didn’t want it to be anything heavy,” Hodges says of her faves. “These were just a home run — no pun intended.” The centerpiece oushak rug “brought an element of soul.”

Such modern and vintage styles add up to “this je ne sais quoi of the old and new,” says Hodges. They ended up finding the dining room table in the house’s “moldy, stinky” basement wine cellar, Hodges says. Though the table fit stylistically — they wanted “moody and sophisticated” with a dark drape — it was too narrow; in Hodges’ workroom, she added another plank down the middle to turn its 28 inch width into 40. She completed the set with Hans Wegner-style chairs made from scratch. 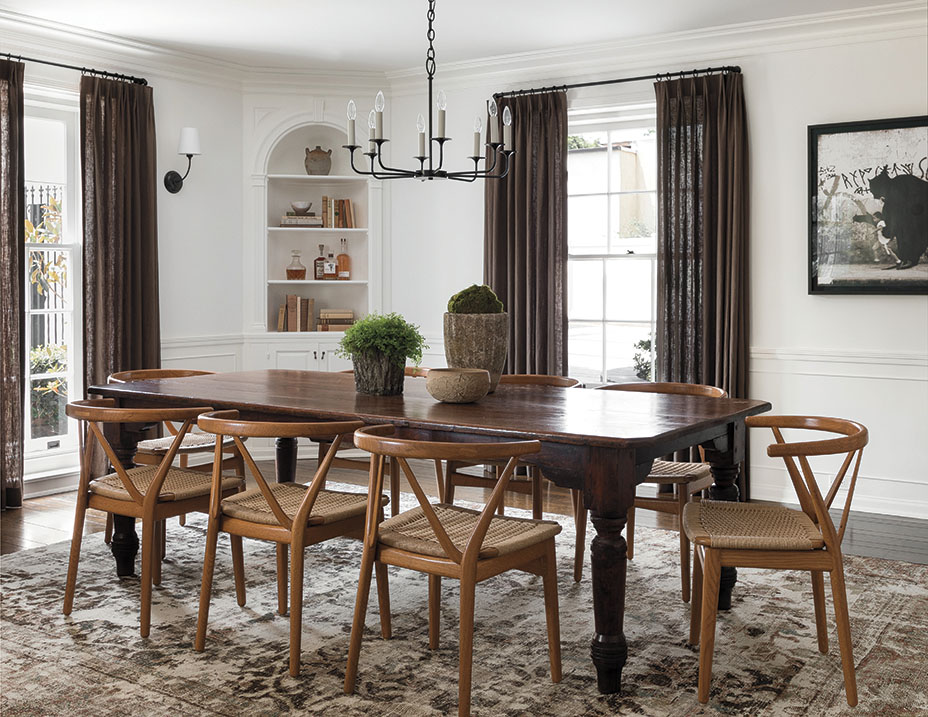 The Utleys’ favorite room remains the “calming” and simple master bedroom, Chase says, with a window seat for reading and soft light in the morning. A bold black bathtub from Signature Hardware anchors the master bathroom.

One thing you won’t find in the home are baseball keepsakes. Chase’s jerseys and trophies are locked up in storage (though one son keeps baseball cards of Dad on a corkboard next to his Lego wall). “We didn’t need it to be a driving force in our lives. Baseball can be all-consuming,” says Jennifer of nixing Dodgers or Phillies decor. The few nods to the sport — a Los Angeles pennant and a leather chair in the boys’ rooms — were the decorator’s ideas, with Chase calling the latter “rad — that looks like a baseball glove,” Hodges recalls. Not pictured: a rocking chair given to Chase by his teammates on the occasion of his retirement. 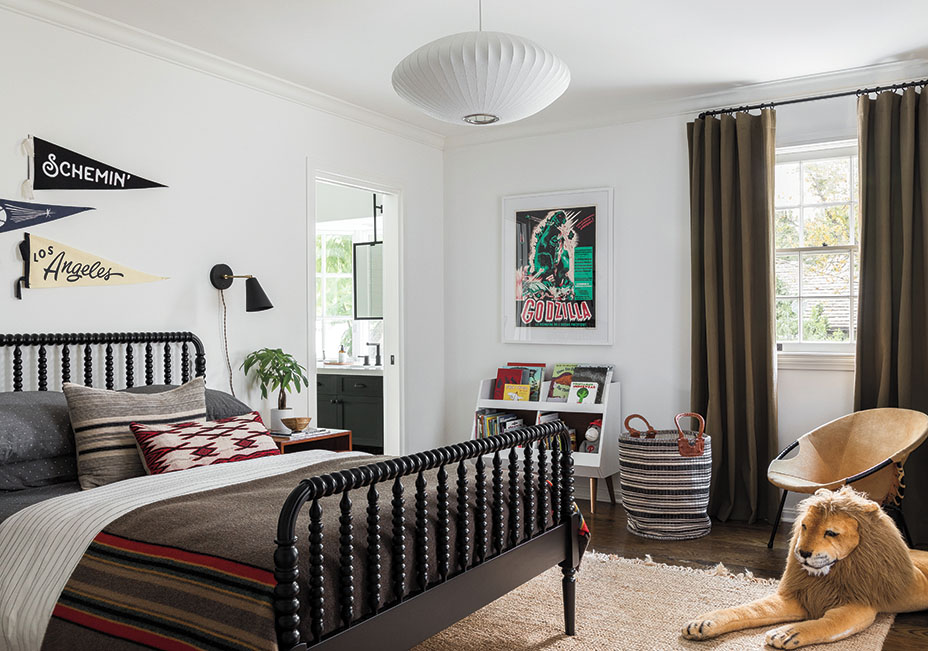 Hodges says she and Jennifer rummaged through the family’s art storage unit to find works that fit the black, white and wood design, such as Mona Kuhn photos for the living room (a 2012 chromogenic print recently sold for $11,500). “I’d rather have walls be blank than just buy something to fill a space. So everything that we have bought, we just love,” Jennifer says.

In the living room hangs what Hodges calls a “wacky” pencil drawing that Jennifer bought at a fine arts school in Philadelphia, made by a grad student. Of the dining room piece by an Argentinian graffiti artist, Hodges says, “They love hip-hop and street style.” Adds Jennifer, “I just like it to have something that makes people look a minute longer.” 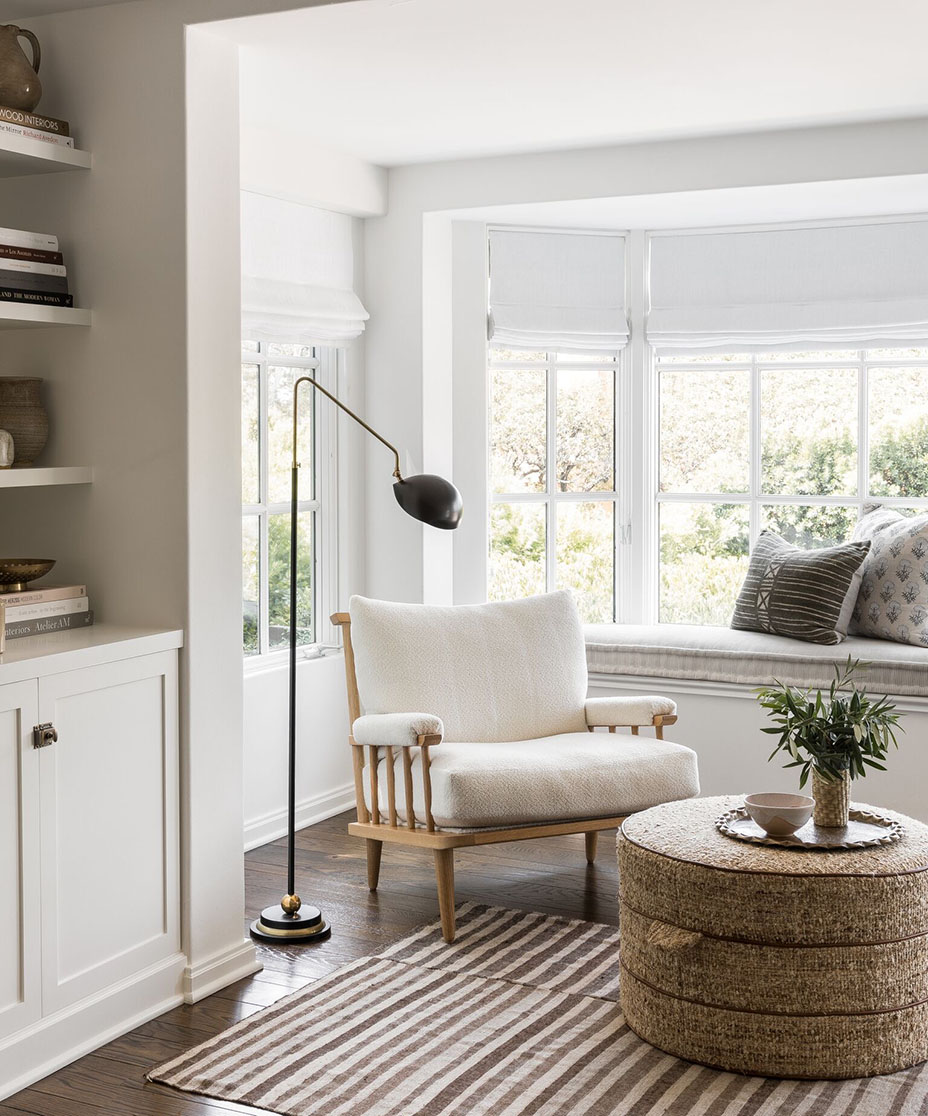 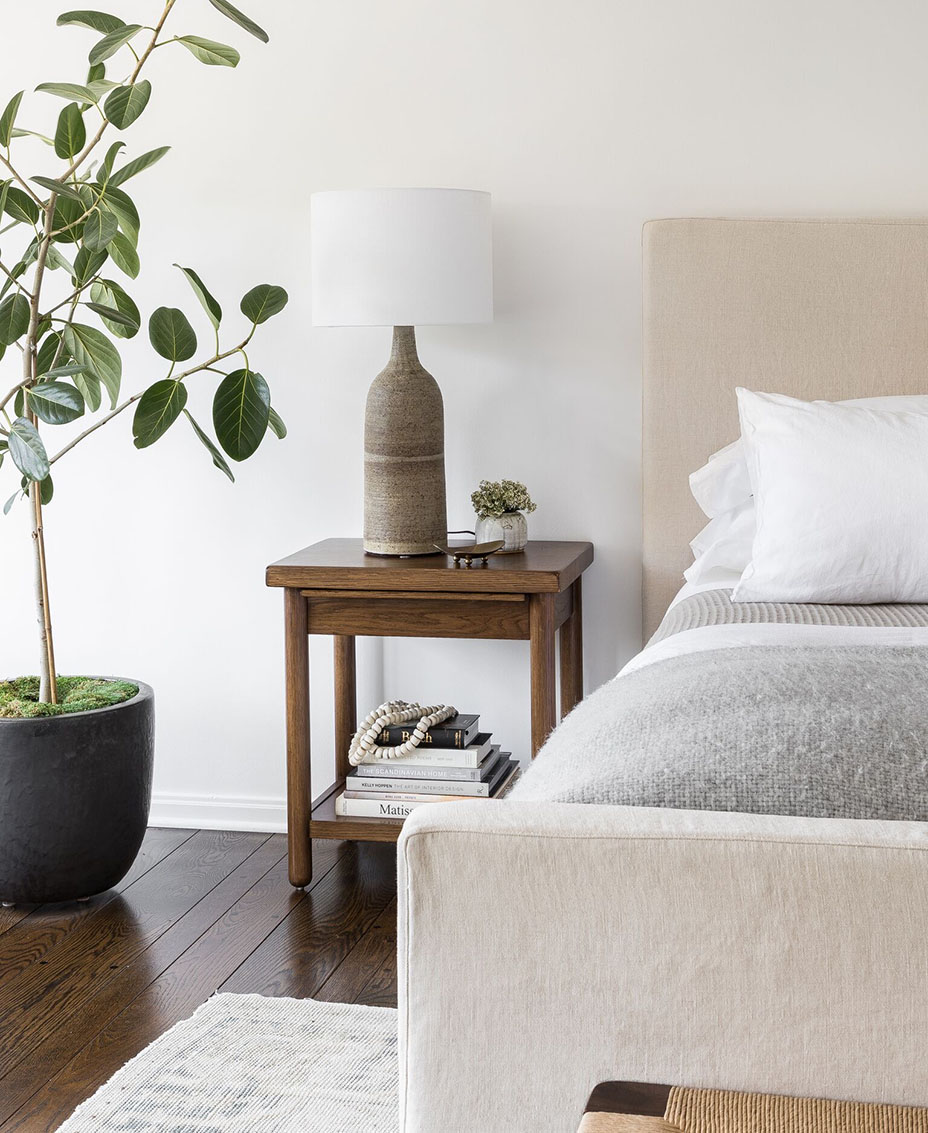