Designer Jonathan Adler has once again used his talents for a good cause. The potter and author was the first one Hyatt and (RED) — Bono and Bobby Shriver’s AIDS-fighting organization — called when they decided to collaborate on a (RED)-inspired suite at the Andaz West Hollywood. “He’s a longtime supporter of the organization, and they thought his eclectic style would be perfect for this project,” says Hyatt CMO Maryam Banikarim of the offering at the hotel that was once a legendary hangout for the likes of The Who, The Rolling Stones and Led Zeppelin.

For the debut partnership between Hyatt and (RED) — for which 30 percent of each guest booking goes to the organization — Adler completely redid a corner king suite on the 12th floor of the Andaz, formerly known as the Riot House. “I’ve worked with (RED) for years — what they do is incredible,” he says. “And hotels are my favorite spaces to design, so when I got the chance to combine the two, my chakras began to tingle.”

To Adler, design can do more than look good — it can do good, too. His goal with any space he designs, he adds, is “to have a sense of place and to make you feel like the most eccentric, glamorous version of yourself. The Andaz has a history of housing rock ’n’ rollers, so I wanted to create a suite that was louche and luxurious, and a little bit sybaritic.” One step into the suite and it’s clear that mission was accomplished. 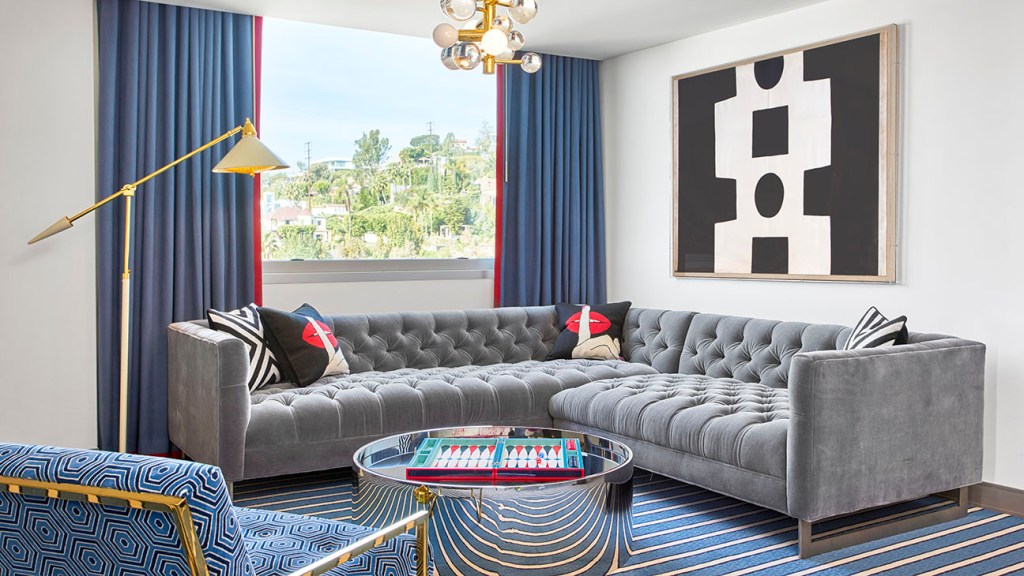 The goal was met — according to the super-pleased Hyatt team, too — in a ‘70s-leaning red, white and blue palette he calls “chic and classique.” Opulent amounts of gold hardware and reflective gilt and glass or lucite lighting (lamps, chandeliers, sconces) ensure the space is totally glam, not Americana. Striped and hexagonal motifs abound, from the blue carpeting to the powder room wallpaper and coordinating furniture, topped with cheeky eye, lip and hand throw pillows. A long honey-hued dining table is accented with red and gold chairs, and even the backgammon game on the reflective circular coffee table coordinates.

The bedroom, which Adler calls “a floaty, dreamlike space,” incorporates more of the luxe materials along with a fluffy white rug and a metallic gold-splattered ceiling. Of that touch, says the designer, “I suppose most people wouldn’t wallpaper their ceiling, but they should.” The art, in keeping with the hotel’s rocker heritage, includes concert photography, an image of Bianca Jagger’s platform shoe, and a one-of-a-kind mural — painted across the living room wall in all red — by international street artist Kelsey Montague, featuring a microphone and streams of notes and symbols representing music, love and the work of (RED). 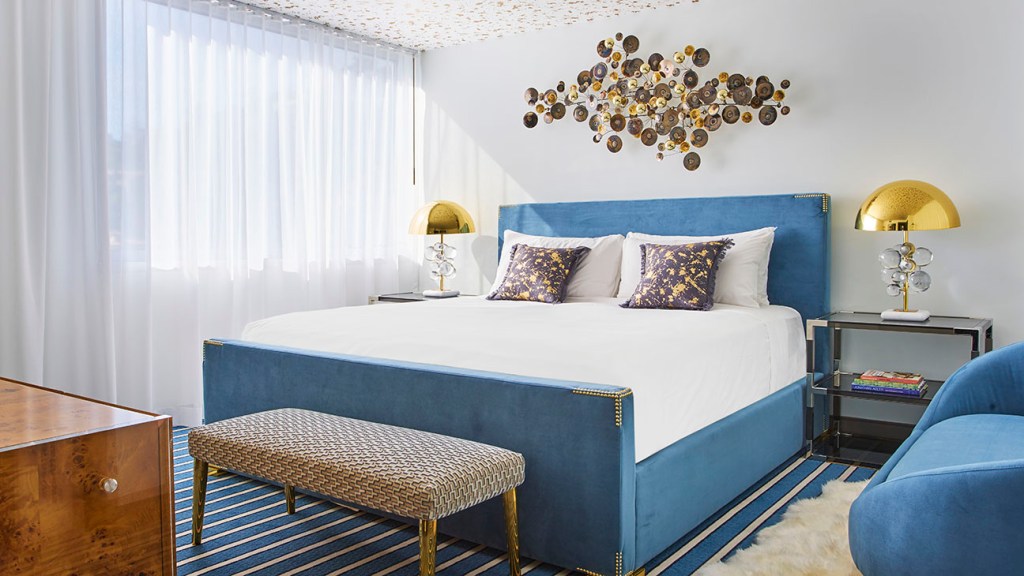 The suite even gives its guests the opportunity to shop, for the curated product of other (RED) collaborations, like Gap’s INSPI(RED) hat or EMPOWE(RED) shirt; a burlap Love tote by FEED, which not only benefits the charity but also provides meals through the UN’s World Food Programme; a special-edition Beats by Dre Pill; a S’well bottle; an Alessi Anna G corkscrew; a Jonathan Adler tomato-scented candle; and specially branded booze by Belvedere and Billecart-Salmon (among other goods that will rotate).

“I happen to be a huge sneakerhead,” says Banikarim, “so I’m really excited that we’ve also partnered with Vans to produce two limited-edition sneakers, one designed by Jonathan Adler and one designed by Kelsey Montague.” From Friday through Sunday, the hotel hosts a lobby pop-up selling the limited-edition Vans slip-ons commemorating the collaboration ($100).

Three staycation-ready packages are available for the suite, to remain open for three years, at least: The basic includes sparkling wine in the suite upon arrival ($519/night); Rise & Shine ($649/night) adds on a massive signature sweet and savory breakfast designed by chef Justin Taylor and daily use of a Sundeck Cabana at the pool; and Rise, Shine & Show, only bookable until April 10, also piles on a pair of tickets to a Jimmy Kimmel Live! taping ($849/night).

Click the gallery below to see more of the suite.