When Anna Faris and film producer Sim Sarna began their podcast Unqualified in 2015, they ordered microphones off Amazon, recorded at her old house and, says the comedian, “I really thought that maybe four people would listen to it.” Surprisingly yet fortunately for them both, a large following quickly amassed, and their long-format relationship advice-focused podcast grew into the network-like umbrella it is about to be, with the forthcoming announcement in early 2019 of about six more celebrity-helmed shows they’ll oversee.

With this growth things have gotten more serious, and to support the burgeoning business official digs seemed a good idea. Faris’ dressing room and new house “out west” (“a pain in the ass,” says Faris, because “you know a lot of celebrities do not like to travel”) weren’t cutting it anymore. Plus Sarna, who just had a baby, “wanted to escape from his family,” jokes Faris. Enter WeWork, whose Hollywood co-working space has just become their brand-new office and studio.

“WeWork recognizes that podcasting is an intimate experience, and audio is intimate because we’re in your ears,” says Sarna. Kley Sippel, WeWork Southern California general manager, says they approached Faris and Sarna six months ago to discuss working together to rethink how their space was programmed, and that they quickly became inspiring partners. “They are creative, collaborative, and a great addition to our member community,” says Sippel of this no-brainer “flagship moment for the future of WeWork in Los Angeles.”

For her part, Faris found it cool that WeWork feels simultaneously independent yet collaborative. “You have the opportunity to meet other young entrepreneurs who are working on their projects, but you can still feel stimulated because they have a ton of communal spaces, the opportunity for collaboration is exciting, and I’m going to be annoying Sim by meeting strangers and I’ll be annoying them as well,” she laughs. Cheddar is next door to the pair, “and I think it would be great if Anna would crash their reports once in a while, come in and read the prompter, what’s going on in the midday market,” suggests Sarna. 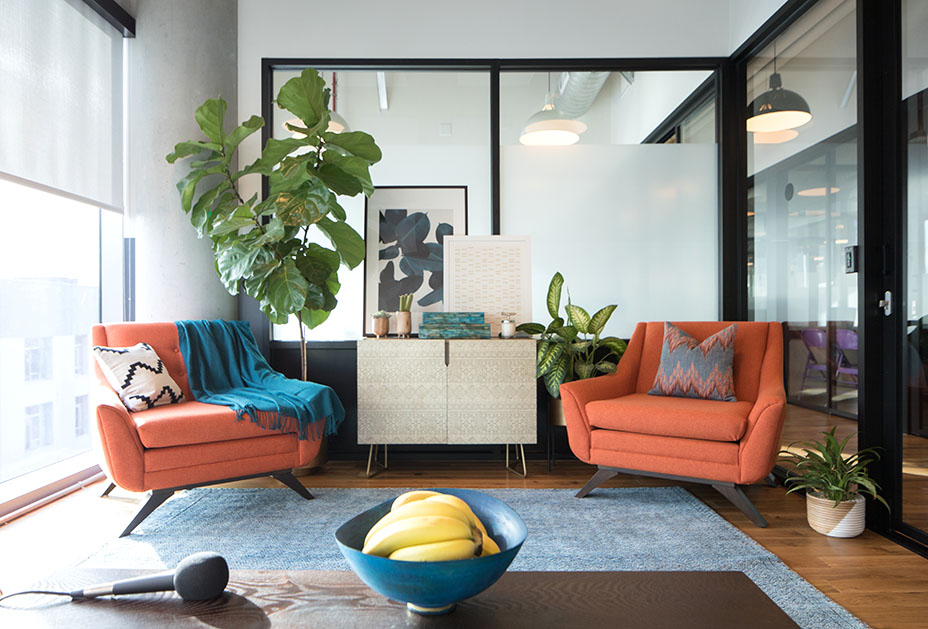 For their new home, “Anna had specific ideas of how she wanted the space to look,” says Sarna, though Faris laughs, “a strong suit of ours is not interior decor — we’re too self-absorbed.” To streamline the process they partnered with innovating online interior design retailer Suitely for the custom collaborative project. Over the course of several weeks they were given the best choices for items, like a sofa or coffee table, says Sarna, and Faris would pick the one she liked. (“It made us feel important,” says Sarna.) According to founder and CEO Marina Glazman, design feedback mostly came from Anna. “She brought a strong sense of personal style and played a major role in setting the vibe for the space.” The idea, she says, was to create a functional and professional studio that felt warm, stylish and inviting for their celebrity guests who visit to record the show over the course of hours.

To that end there were a few must-haves, a bar area being one of them — soundproofing, done by WeWork, was another. The Suitely team sourced drinkwear, brass bar tools, accessories and planters from artisans and brands around the world, says Glazman, “to complete a modern and mid-century–inspired but trend-forward styling of the bar cart, a must-have for any modern workspace!” The special-ordered bar cart, with brass wagon wheels, did not arrive smoothly, however. It was deemed defective and thus not shipped as planned mere days before installation, causing the Suitely team to chase down more than a dozen manufacturer showrooms in the U.S., then every boutique in California that had a relationship with the brand until they finally found one in Pacific Palisades that wouldn’t fit in the car, requiring an Uber pick-up service to get it to Hollywood just in time. 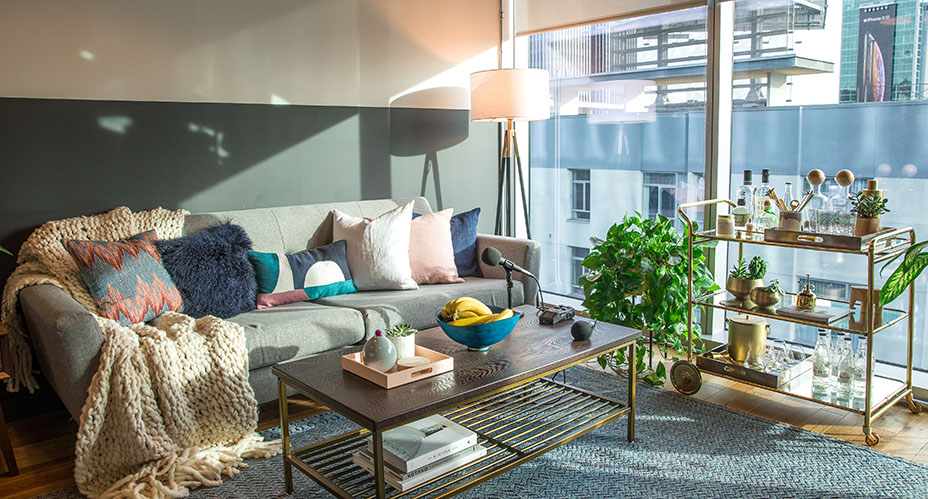 “The studio is designed like a living room, which we love, because we want to make sure everyone feels comfortable,” says Sarna. A palette of blues with pops of orange and pink give the space a vibrant energy that’s more expected out of a private home than a studio space. The lack of obvious recording equipment also makes it feel laid-back and cozy. Faris likes to be able to tuck her legs up and move around, so roomy armchairs and a large sofa decked with plenty of purposely mismatched throw pillows were essentials. Coffee table books, ceramics, pendant lights, casual throws and Instagram-worthy greenery also create an inviting environment.

“We wanted celebrities to feel like it was an intimate space,” says Faris. There is a lot of interior glass “in the best of ways, so it feels open and fluid, but they offered to put up curtains we could draw if a nervous celebrity didn’t want to feel as interactive with the people walking by,” or like they’re in a fishbowl. There’s also a secure entrance from a private garage with an elevator going directly to their floor, so high-profile guests can enter without being seen.

As far as their growing podcast business, Faris and Sarna are fairly tight-lipped, though they reveal expansion will delve into a couple other arenas beyond relationships, though they’re not losing focus on Unqualified. Podcasts, they feel, are an important medium amid the Hollywood craziness. “It’s so incredible to be able to have a degree of control over your own narrative as a celebrity,” says Faris, “and to be able to talk to and interact with people about the same kind of problems that most of us face, which is ‘does he really like me?’ It’s oddly reassuring how relatable it is.” 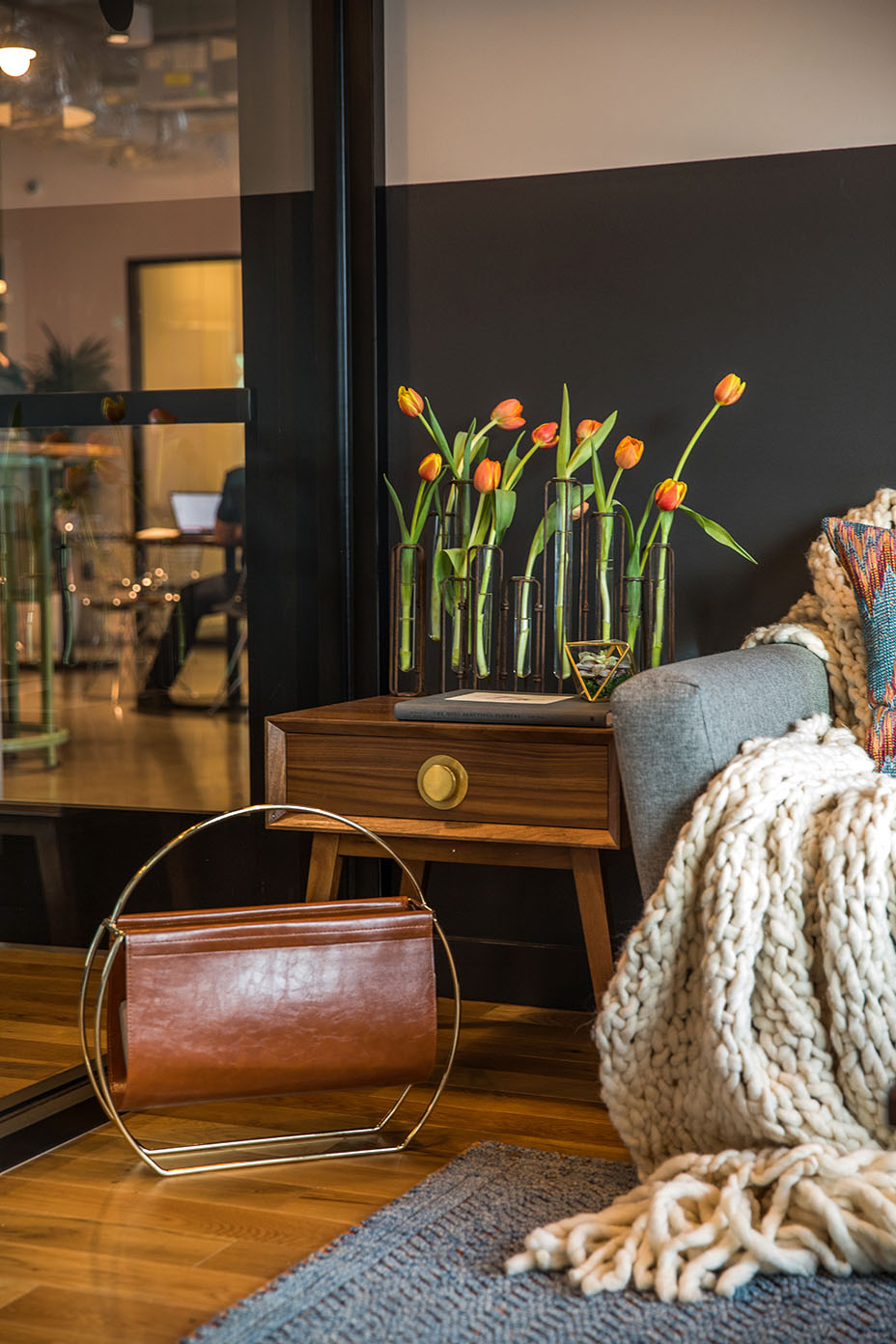 Oprah to Dax Shepard: 8 Podcasts With Stars as Hosts