Two of fashion’s reigning rock stars teamed up for the final session of Vogue’s Forces of Fashion summit Friday, Oct. 11. Vogue editor-in-chief Anna Wintour sat down for a chat with the woman she called one of her “closest and long-standing friends,” fashion designer Donatella Versace. They touched on the Italian designer’s spring 2020 fashion show coup with Jennifer Lopez, the dietary preferences of President Donald Trump, vacationing together and even gave a clue to the theme of next year’s Met Ball — while possibly inaugurating a new comedy act in the process.

As to that Internet-breaking finale walk in the fashion house’s updated version of the jungle-print dress Lopez had created a sensation in 20 years earlier at the Grammys, Versace revealed that she only thought of asking the star at the Met Ball in May. “She was sitting at the end of the table. I took a look at her, and she looked so gorgeous and she was so sweet, and she hasn’t changed a bit since the first time,” Versace said. “And I said, ‘Would you do it again?’ She said, ‘Why not, let me check my schedule.’ Then she came [to Milan], and everything was undercover.”

Wintour, who called it the “fashion event of the season, if not the year,” also remarked, “It got a standing ovation, which is something you don’t often see in the bored world of fashion.” 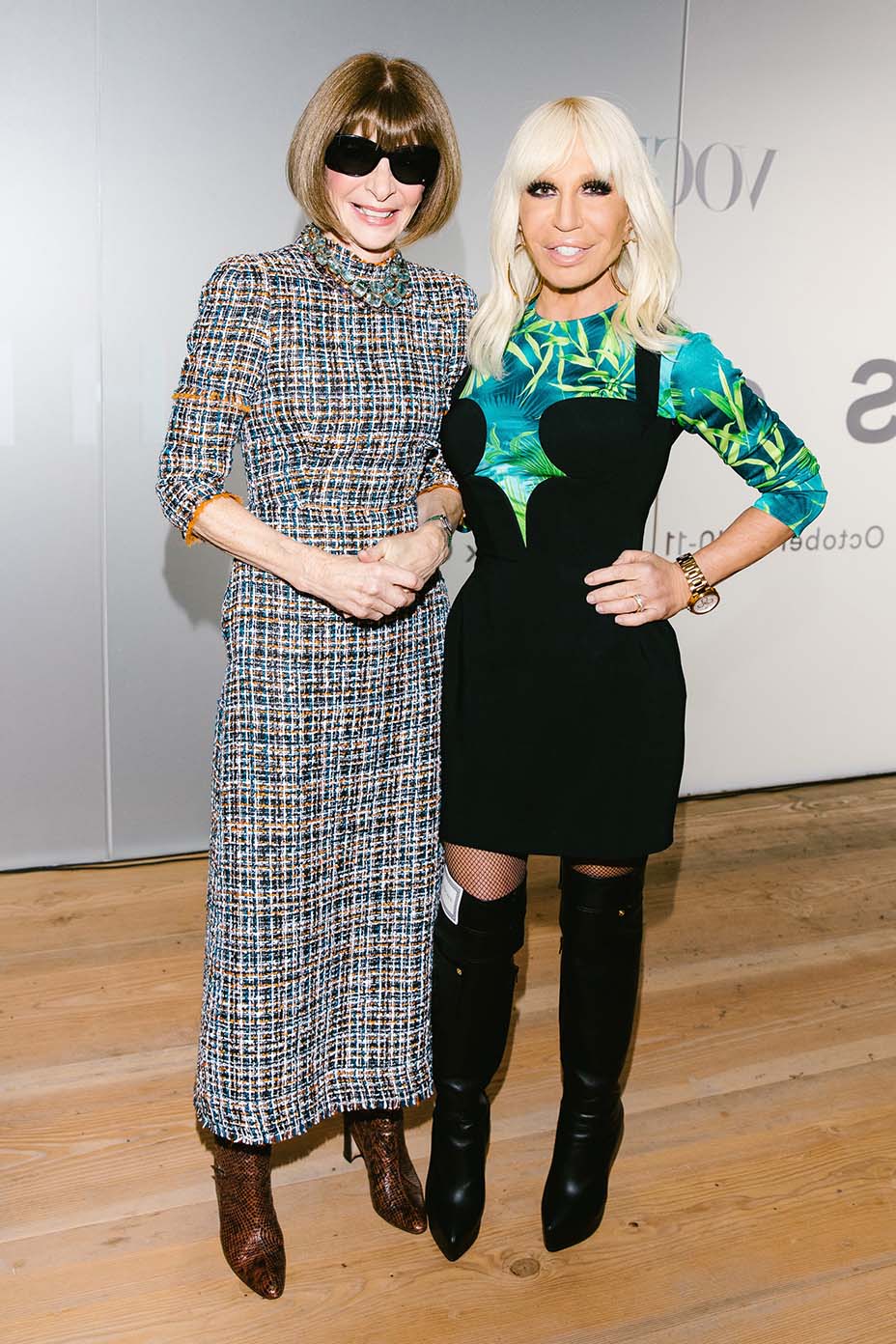 Later in the conversation, when the Met Ball came up again, Versace teased Wintour, “Can we just talk about the next one?”

A wary Wintour responded to mirthful laughter, “It’s under wraps, but I’ll just give you a clue, the dress code will be ‘timeless.’ And that’s all I can say, or the museum will excommunicate me.”

Wintour then pivoted by asking Versace what her take on American politics was these days. “I’m not really into politics but, for America, it’s a difficult time. But I have a funny story,” Versace said, mentioning that her company had once rented Mar-A-Lago for an advertising shoot back in the ’90s. “So we had Steven Meisel and Madonna and a huge team. And the second day, when we were doing the last picture, this gentleman called Mr. Trump came in with a bucket of Kentucky Fried Chicken. And everyone was like, ‘Really?’”

Moving on, Wintour recalled her vacations with Versace, including a whitewater rafting trip and an excursion to a dude ranch in Wyoming. “The ranch was quite difficult to get to and we had to take a small plane. And Donatella said, ‘That’s not a plane, that’s a hair dryer,’” Wintour recalled to more laughter. “You should see her riding a horse. She wore full Lycra and high heels. And she was still smoking back then and she said, ‘Hey, Anna, I’m in Marlboro country.’”

Wintour ended by invoking the spirit of the designer’s brother, the late and legendary fashion designer Gianni Versace. “He had a love of culture and the world in general, and it would spill out into everything that he did with his designs,” she said. “And obviously Donatella has that very same gene.” 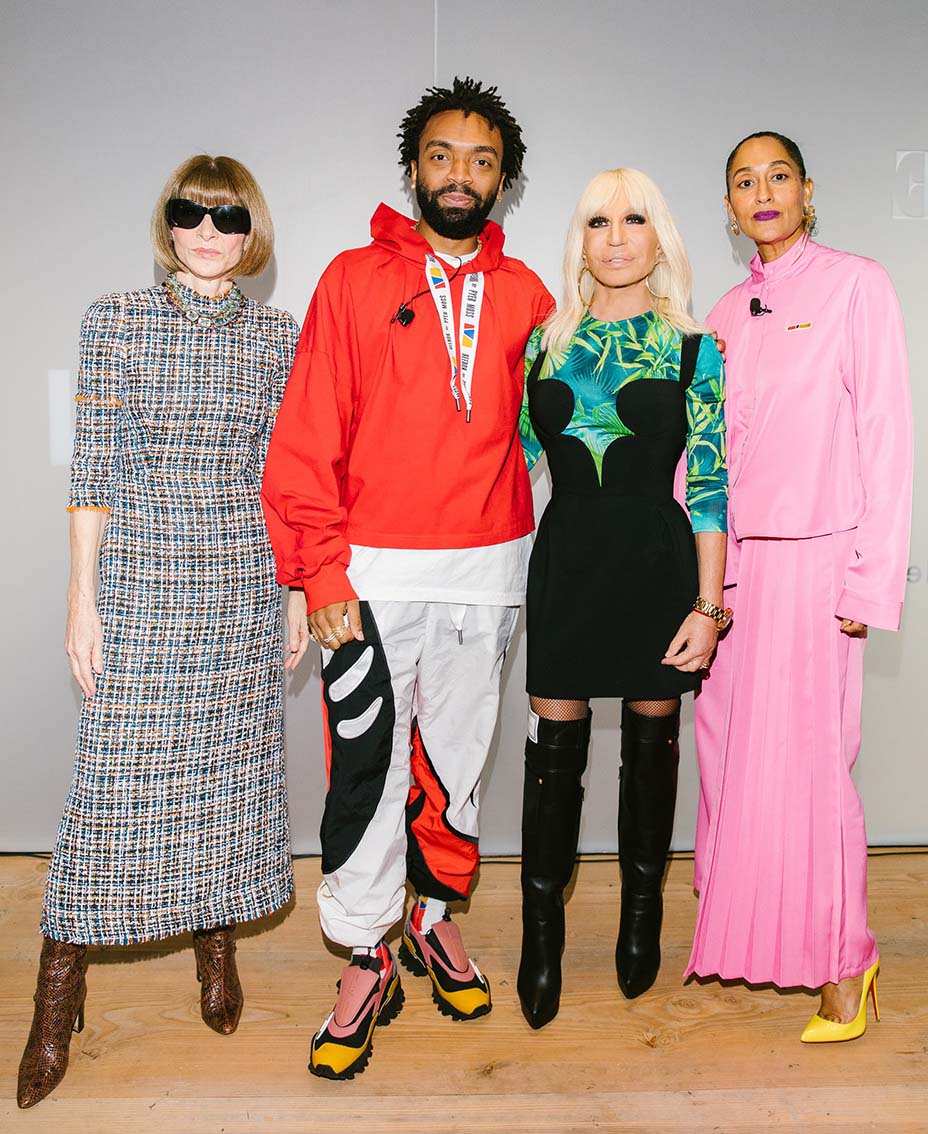 It was a rollicking day all around, with Blackish actress Tracee Ellis Ross discovering that she and Pyer Moss fashion designer Kerby Jean-Raymond were fellow Scorpios (the two helmed a panel earlier in the day). “Shut up!” she exclaimed. “I knew we were going to be friends.”

After Raymond suggested that the word “masculine” was outmoded and should be replaced with “ferocious,” Ross complimented him on the pink trouser suit of his design that she wore to the American Music Awards, adding that it didn’t have the usual tailored-for-women shape. “I loved that straightness,” Ross opined.

Raymond responded that his approach actually grew out of developing a larger range of sizes: “I find it easier to make flowing, boxier things that fit a universal range of people so we can be as inclusive as possible.”

Inside The Hollywood Reporter and Brunello Cucinelli's Power of Style Event