A-listers turned out in abundance for Thursday night’s preview of Hudson Yards, the $20 billion mixed-use development on New York’s West Side, which ranks as the largest and most expensive private project in U.S. history.

Stars Anne Hathaway, Lin-Manuel Miranda, Maggie Gyllenhaal and Dylan Sprouse were among those who appeared on the event’s red carpet, while Tom Brady and Gisele Bundchen bypassed the carpet and headed straight to the VIP party at Estiatorio Milos, the Mediterranean restaurant on Hudson Yards’ sixth floor. Katie Holmes and Whoopi Goldberg, meanwhile, were spotted at the Neiman Marcus party, where Liza Minnelli capped the evening with a performance of her signature “New York, New York.” 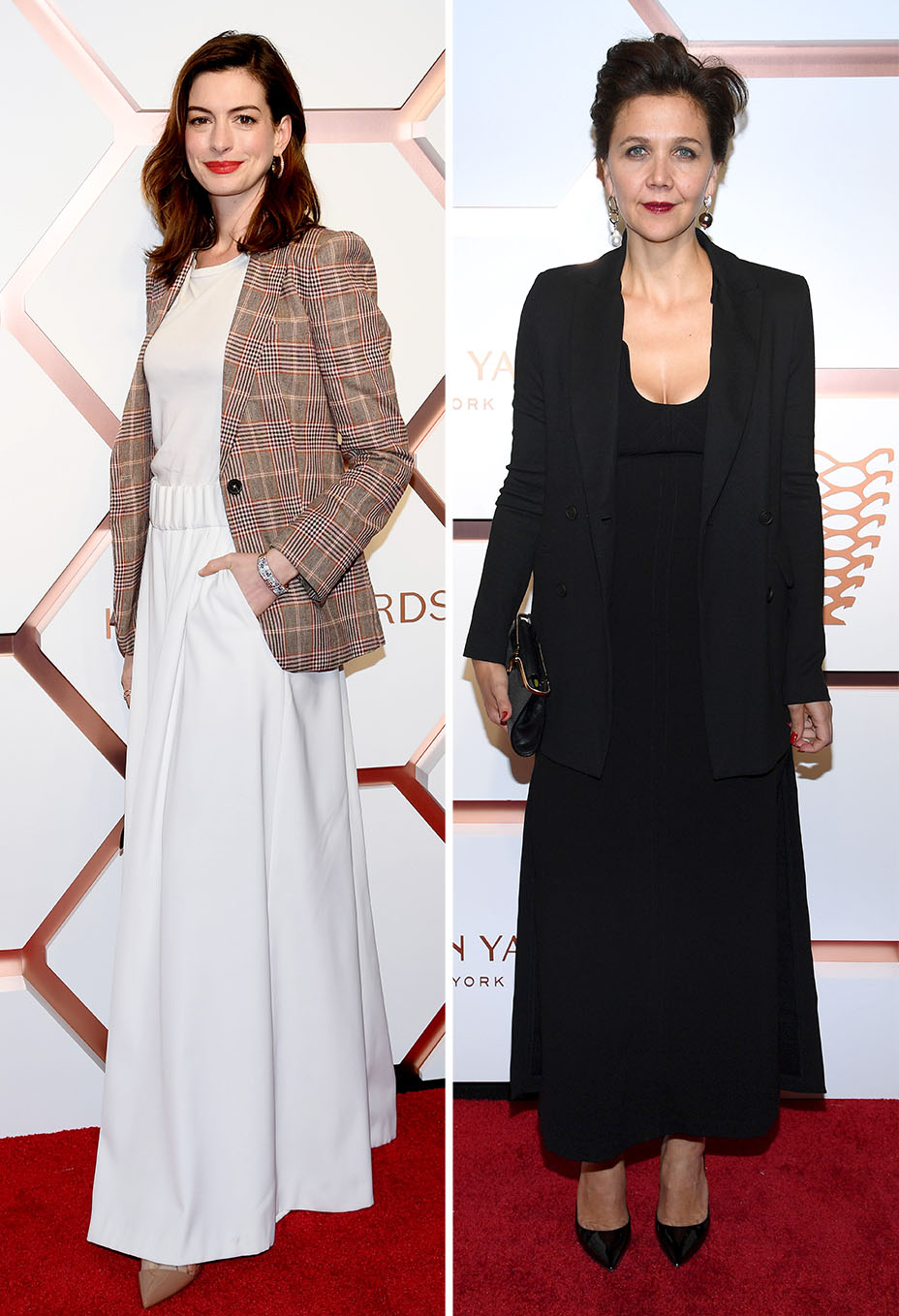 But a chef may have stolen some of the star-studded spotlight: José Andrés, the culinary rock star who has been lauded for his work feeding Puerto Rico after 2017’s Hurricane Maria and federal workers during the recent 35-day government shutdown. Turning up early on the red carpet, Andrés brought oysters for appreciative photographers and reporters, while a wake of admirers followed him throughout the night at Mercado Little Spain, the expansive Hudson Yards food hall he conceived with fellow chefs Ferran and Albert Adrià.

With its mix of food stalls and restaurants serving tapas, paella and other authentic Spanish dishes, Mercado Little Spain has been the realization of a three-decade dream, Andrés told The Hollywood Reporter. “Thirty years ago around this same time, I was in the Spanish Navy — I came on a tall ship, with four masts,” he recalled. “We crossed under the Verrazano Bridge, and I could almost touch it, because I was up in one of the masts, and we could see Lady Liberty and Ellis Island. The ship docked on a street not far from here, and that was my first time in New York. After my military service, I came back, and 30 years later, here I am, bringing Spain to America. I’m a proud Spaniard, but I’m also a proud American, with three beautiful daughters born here. And I’m very proud of what we have created here.”

On any night the opening of the first Neiman Marcus in New York or a dining concept like Mercado Little Spain might warrant its own standalone coverage, but in Hudson Yards they were merely two elements of Thursday evening’s mammoth production. More than 50,000 people were reportedly invited to this opening night, with roughly 15,000 RSVP’ing to check out the 1,000,000 square feet of shops and restaurants, as well as the public square and gardens.

The latter’s centerpiece is “Vessel,” an interactive artwork of 2,500 individual steps and 80 landings, designed by Thomas Heatherwick as an artful way to discover views of Hudson Yards and the surrounding city. If you want to assess Hudson Yard’s impact on the city in perspective, consider that the last development to spawn similar anticipation was Rockefeller Center; its 19 buildings and public spaces were completed in 1939 and were a relative bargain at $250 million.

At 78 years old, Stephen Ross, chairman of The Related Companies that developed the 28-acre Hudson Yards, acknowledges that this project surely will top his list of achievements, though he’s also proud of the concept’s modernity. “It’s about creating a lifestyle,” Ross said on the red carpet. “It’s a live-work-play environment that represents today’s urban living, done in a style that’s never been done before.” For stars and other VIPs, what might the attraction be? “If you’re living here, everything is right at your fingertips,” he added.

Many Hudson Yards retailers brought in special demonstrations for the opening-night preview — at Neiman Marcus, a Louis Vuitton artisan demonstrated her agility with crafting handbags. Boutiques such as Watches of Switzerland and Cartier also used the opportunity to debut pieces that initially will be exclusive to those locations. The latter’s newest collection is Les Galaxies des Cartier, a planetary-inspired grouping of numbered, limited-edition jewels that will be sold at Cartier Hudson Yards for two weeks before expanding in small quantities to the jeweler’s other U.S. locations. 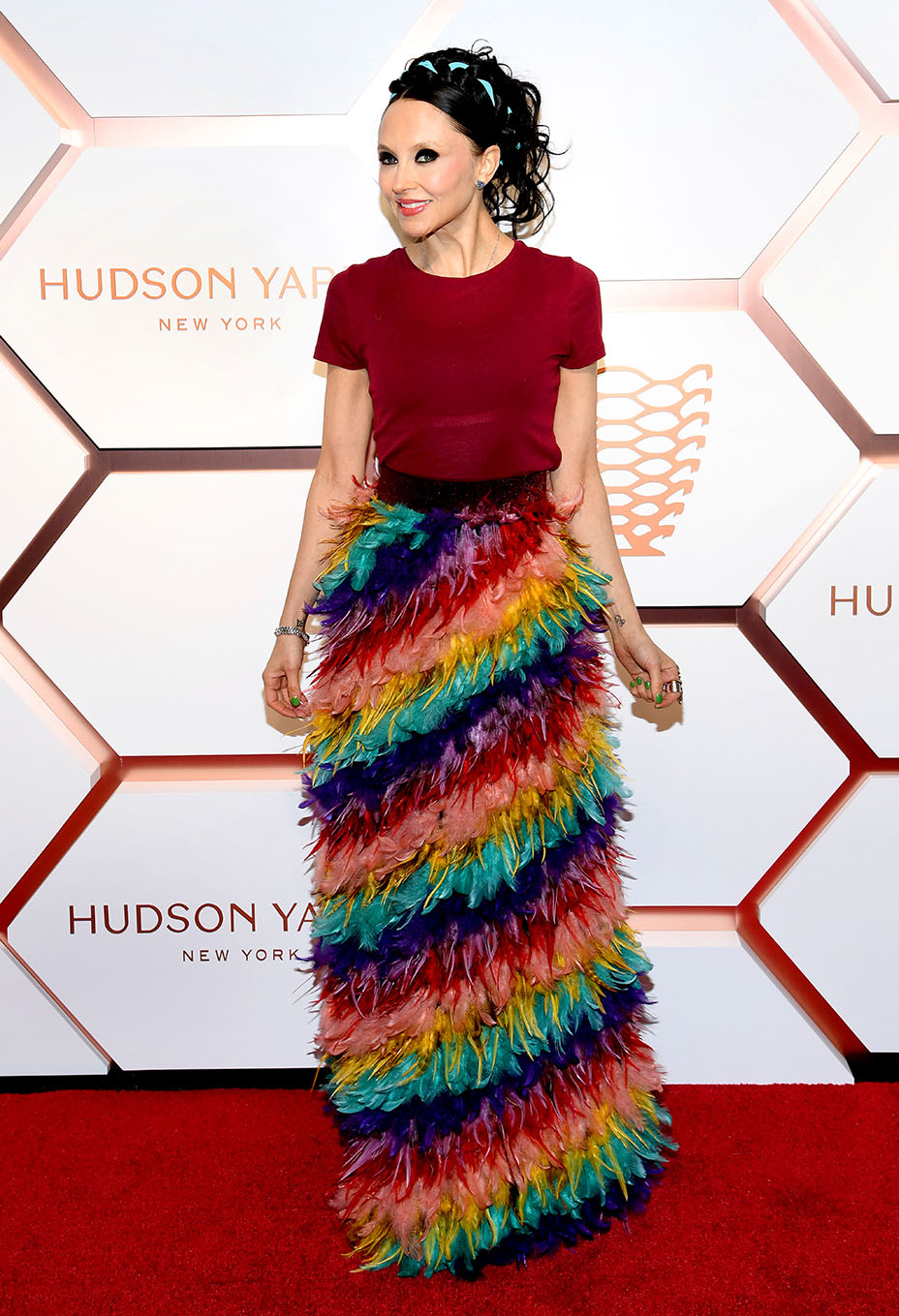 The dress code for the night was “festive,” and among those embracing that idea was Alice & Olivia’s Stacey Bendet in a long skirt of her own design, embellished with multicolored feathers. Bendet had spent the afternoon viewing the Francesco Clemente exhibition at the Brant Foundation in Greenwich, Connecticut, and ended up changing in the car so she wouldn’t miss the party’s start time. “As a New York designer, I think this is phenomenal,” Bendet said. “Anything that brings excitement in terms of culture and retail to New York is great for business, great for brands and great for the city.” 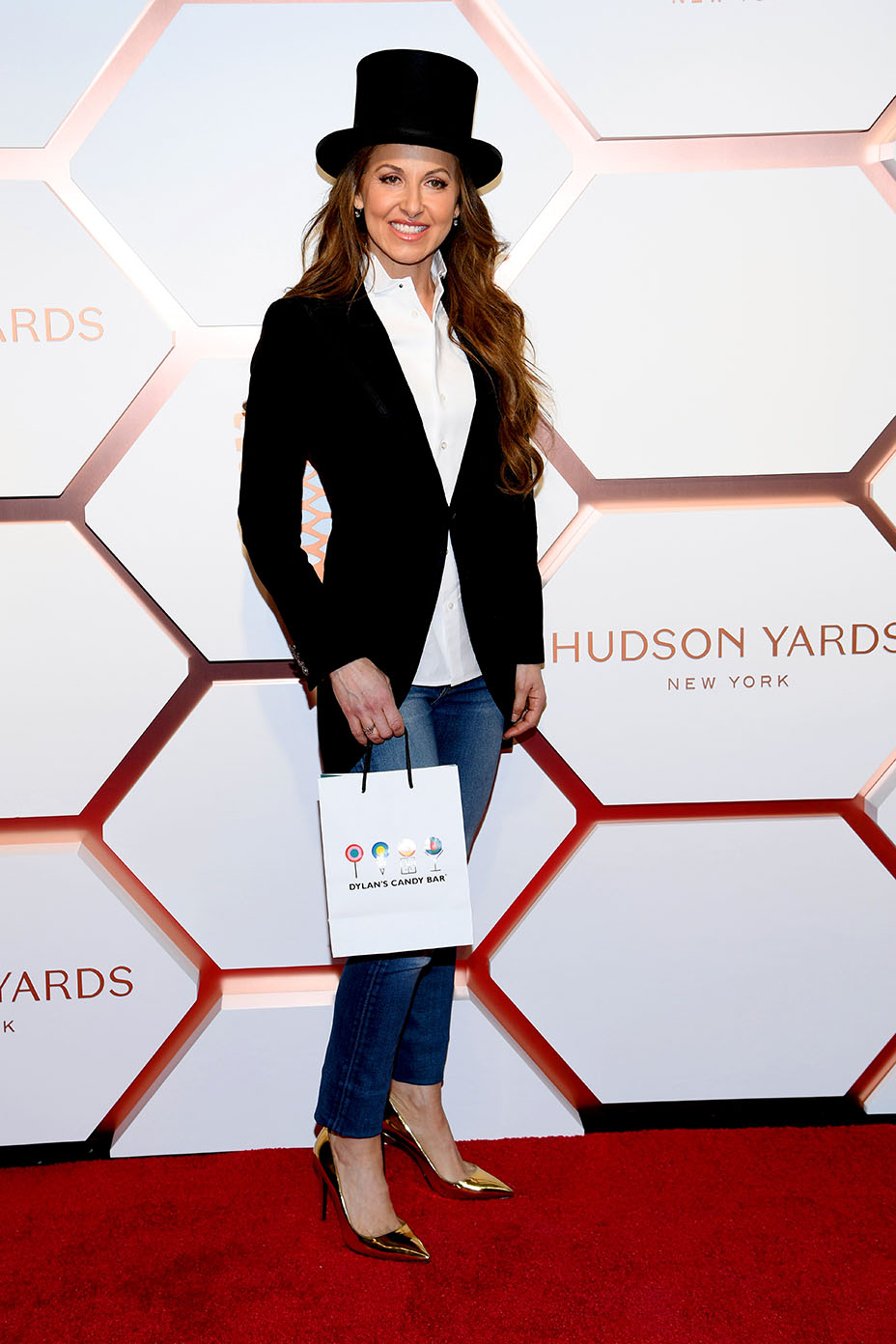 In a top hat and tails, Dylan Lauren, who opened the third Dylan’s Candy Bar in the city at Hudson Yards, called the choice “a cool way to touch another part of New York.” With art installations also key throughout the development, Lauren said she wanted to take part in that idea, so she enlisted New York contemporary artist Ivy Naté to create towers crafted of discarded stuffed animals. “It’s very color-centric, so it’s perfect for our store,” she said. 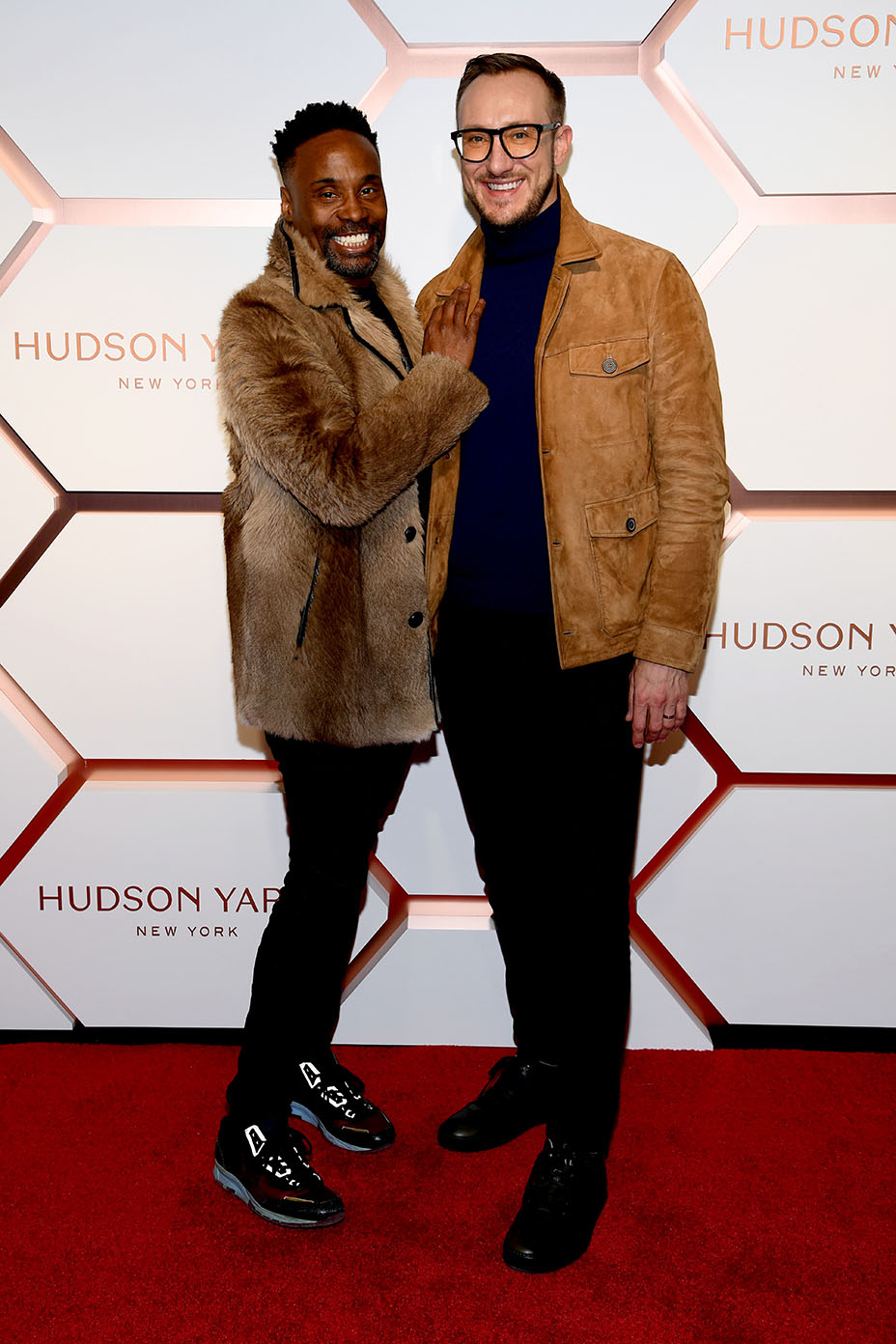 Tony-winning producer Jordan Roth chose Givenchy, Chanel and Calvin Klein to create a black-and-white optical effect with his look, while Billy Porter, wearing a faux-fur coat by Lanvin, said he couldn’t wait to explore all the stores. “I know I’m bougie, I like high-end stuff, so I like that I’m going to be able to shop in one place,” he told THR. But it’s his husband, Adam Smith, co-owner of the luxe eyewear company Native Ken, who makes the restaurant decisions. “We love all sorts of food,” Smith added.

“He loves restaurants and does all the research,” Porter said. “I’m not going to do the research; I just want to be taken someplace. I also love the thrill of discovery, of experiencing something for the first time, so I’m excited to check out everything tonight.”

Indeed, while some were eager to explore the retail spaces and art installations, others couldn’t wait to try the restaurants. Guests eagerly toured the restaurants to indulge in sampling, from the truffled grilled-cheese bites at Queensyard (where a vending machine offering mini Moet & Chandon bottles is located next to the wine room) to Michael Lomonaco’s Hudson Yards Grill, which offered sliders, thin-crust pizzas and bites of coconut cake. “I know Michael, because Porter House at the Time Warner Center is my cafeteria. I go there a couple of times a week,” said CNN’s Don Lemon. “I probably will end up at his restaurant here the same amount of time. I love to go out and eat, but I’m also a creature of habit; if I find a restaurant I like, I don’t veer away from it. So I’m hoping there will be a couple here where that will be the case.”

Lemon also conceded that he’s a fan of fashion, choosing a favorite, Suitsupply, for his head-to-toe look on Thursday’s red carpet: “I have a guy there, Joe Strider, who puts things together for me and always does a great job,” he said. “I have to wear a lot of suits for work, but in my personal life, a T-shirt and jeans is my go-to thing. Once in a while, I will go to a high-end store and buy something outrageous, so I’m excited for this concept. It’s good for the city.”

As the co-owner of All-Wise Meadery, the Williamsburg bar and brewery he co-founded after graduating from NYU, Sprouse said he was eager to mingle with industry people — the food-and-beverage industry, that is. “We know a lot of those people who will be here tonight, and there’s not much competition for us, because we’re primarily a brewing space for mead, a honey wine, and there’s also not much competition for brewing in general,” he said. “But the more food and drink and bar concepts in the city, the better. It only stands to uplift us all and create the cultural food destination that New York always has primed itself to be.”

Of course, Thursday night’s opening represented just the first phase of Hudson Yards’ offerings; stores soon to open include Dior, Tod’s, Brooks Brothers and Tiffany & Co., while completion of all phases is expected by 2025. But even as Andrés was talking about Mercado Little Spain and the idea that Spanish cuisine “has always been about the food of inclusion,” he also nicely summed up the vibe of Hudson Yards overall: “This is going to be a good party.” 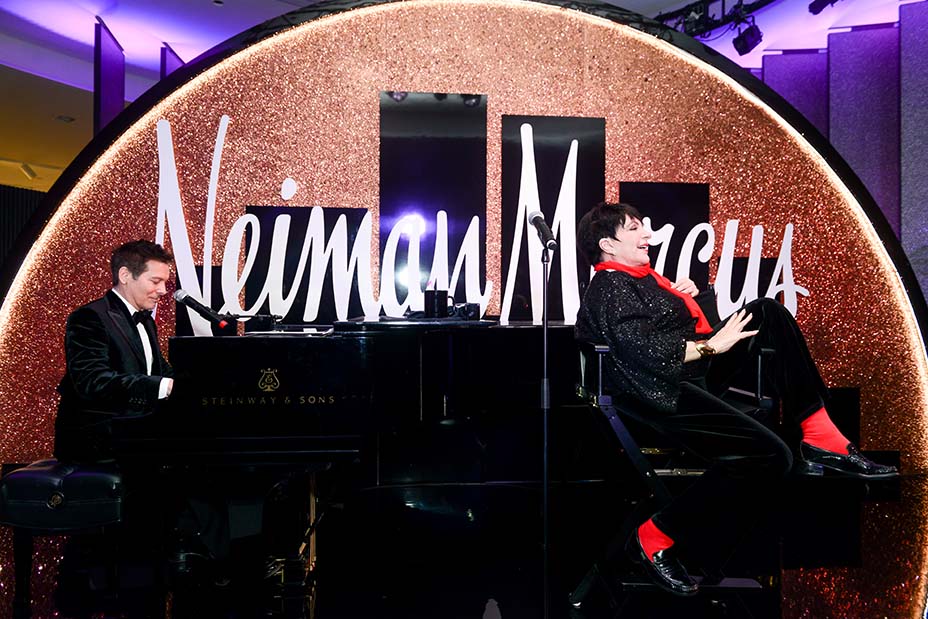